In a potent dark comedy that never flinches and never smirks, Parker Posey must investigate an assisted suicide case that turned into a fabulous party. 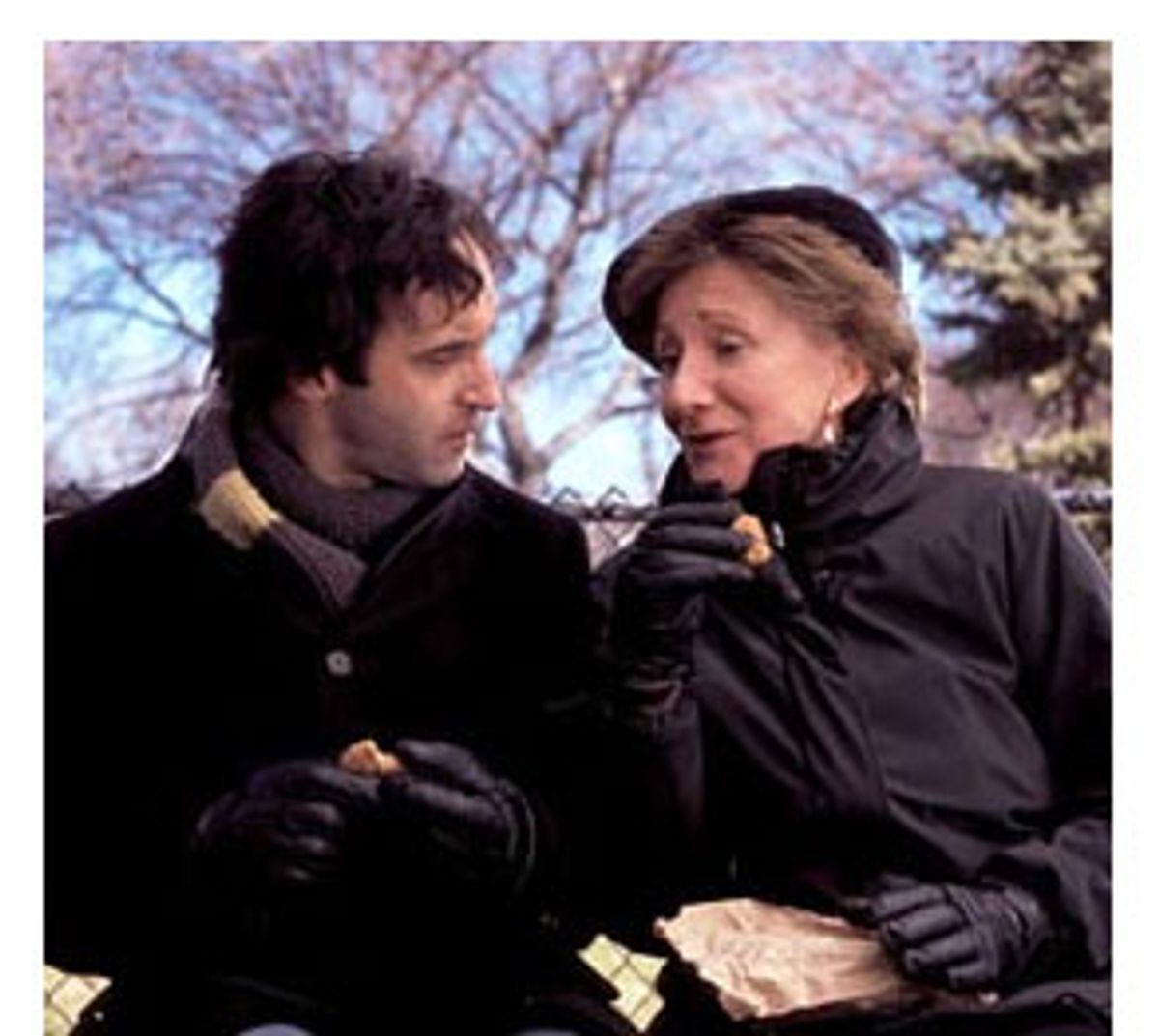 The problem with black comedy as a genre is that the people who make them tend to spend too much time congratulating themselves for being outré: They practically cover their movies with sticky notes just to make sure we've properly observed how much unconventional rhetoric they're getting away with.

But with "The Event," writer-director Thom Fitzgerald -- his previous feature was "The Hanging Garden" -- has managed to make a comedy about assisted suicide that hardly feels black at all. The movie has its share of problems: It feels long and ungainly when it should be swift and sharp. And there are too many places where Fitzgerald and his co-writers, Tim Marback and Steven Hillyer, use nails to drive home their message instead of simply letting the story and the characters carry it to us softly. We've gotten the point of the movie long before Olympia Dukakis, as the sympathetic mother of Don McKellar, a seriously ill man who has chosen when and how he wishes to die, intones, "In my world, love is above the law."

But then, earnest statement-making is sometimes more tolerable than self-congratulatory smirkiness, and "The Event," thankfully, doesn't have a whole lot of the latter. McKellar plays a gay man with AIDS whose various treatments have stopped working. His health and quality of life have rapidly deteriorated, so he has chosen to throw himself a goodbye blowout in his Chelsea loft, a raucous, joyous catered affair, before retiring to his bedchamber (surrounded by his closest friends and family) to essentially pull the plug on himself. His chief assistant is also his best friend (Brent Carver), who runs an AIDS hospice and has an all-too-deep understanding of how much suffering HIV-related illnesses can inflict.

A young and exceptionally driven assistant district attorney (Parker Posey), is assigned to investigate McKellar's death, since her boss has noticed a rash of similar apparent suicides and thinks something funny is going on. She chases down McKellar's friends and family to grill them on the details, and his story unfolds before us in flashbacks. We learn that while his mother and one of his sisters (Sarah Polley) supported his decision, his other sister (Joanna P. Adler) was staunchly against it. We also see how McKellar, a musician, created an extended family beyond his flesh-and-blood one, a network of friends that include a grief counselor (Jane Leeves), who's crisp and efficient when she's doing her job but who crumples into tears whenever she has to talk to McKellar about his own death.

That's just one of the funny and bittersweet touches that keeps "The Event" chugging along. Fitzgerald has a wonderful feel for the absurd: At one point McKellar, invoking an old joke from "Pee-wee's Playhouse," instructs his two little nieces that the magic word of the day is "Death." When Leeves arrives at their home for a counseling session and asks them, gently and gravely, how they feel about their uncle's impending departure from this world, they squeal and jump and whirl around like miniature maniacs.

The actors rally round to help Fitzgerald get just the right tone. Polley has one hilariously heart-rending moment: An aspiring actress, she needs to run off to an audition for a commercial just minutes after McKellar has informed her that he's dying. She sits in front of the camera, glassy-eyed and smiling, reciting an inane ad pitch for a yeast-infection medicine called "Vagimar." She just can't get it right, and by the third take, she's crumpled into laughter at how ridiculous the whole thing is. At some point we can't detect, her laughter dissolves into unabashedly desolate tears.

Maybe part of the reason "The Event" works so well is that Fitzgerald doesn't have compassion only for people dying of AIDS; his compassion rings out for anyone who's dying, period, as well as for the families and friends who care for them. He's straightforward about what it's like to care for someone who's terminally ill. If "The Event" is often too cluttered and busy, Fitzgerald does know how to pull back and focus on the right details: Dukakis and McKellar have a lovely, wordless scene in which she gives him a gentle sponge bath and then struggles to put a clean white T-shirt on him. The scene isn't rushed; it takes as long as it takes, and its tender simplicity speaks volumes about how Dukakis feels about her son, and about what it's like to care for someone who's dying. In another scene, McKellar soils the bed, and Fitzgerald doesn't shy away from being explicit about it. His refusal to yield to "good taste" is refreshing. As anyone who has ever watched a loved one waste away in pain knows, the process of dying isn't always tasteful, discreet or tidy.

"The Event" is in some ways a very serious picture, but it's never a downer. Fitzgerald seems to realize that its chief question -- If each of us is the architect of our own life, shouldn't we be allowed to plan our own death? -- doesn't have a hard and fast answer. But he does make us see how McKellar's choice is the right one for him. There's something to be said, as McKellar puts it, for leaving the party while you're still having a good time. Seeing him at his sendoff bash, very happily surrounded by relatives and friends, some of them drag queens in fabulous ball gowns, you don't wonder for an instant why he'd want these to be his last memories of life, as well as his friends' last memories of him. When it's time to shuffle off this mortal coil, why not go out doing an old soft-shoe, or a tap dance, or a mimed version of an old Supremes routine? One of the keys to dying with dignity just may be having a sense of humor about it.