Dick Cheney's chief of staff helped hype the Iraq threat and discredit Joe Wilson. But while the White House has denied Karl Rove is the leaker, so far it's left Libby twisting slowly in the wind. 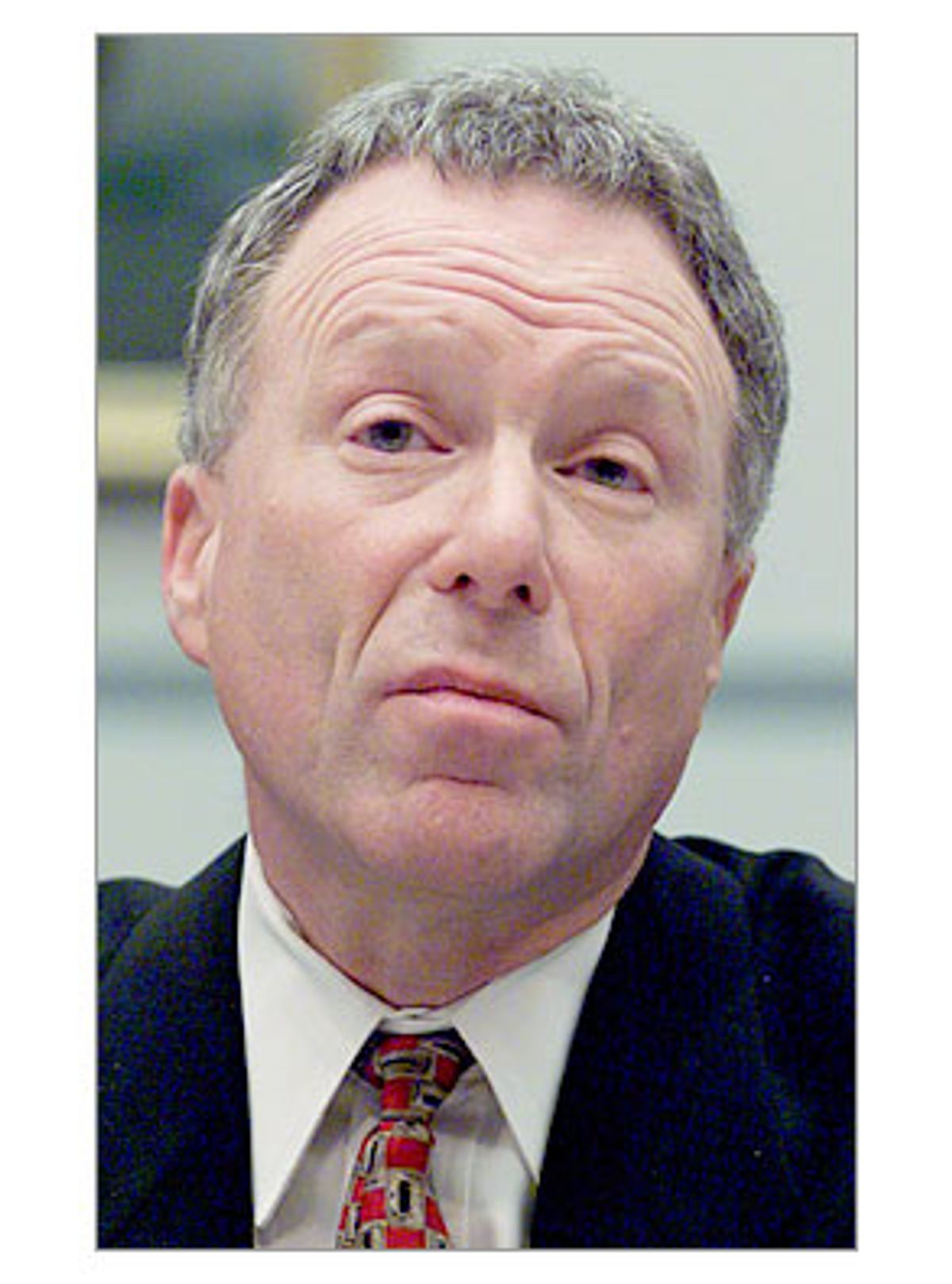 Criminal leak investigations are notoriously futile, and the identity of the administration officials who illegally blew the cover of CIA operative Valerie Plame may never be known. But one name keeps coming up, and so far it hasn't provoked a specific, emphatic White House denial: Lewis "Scooter" Libby, assistant to the president and Vice President Dick Cheney's powerful chief of staff.

On Wednesday the New York Daily News reported that "Democratic congressional sources said they would like to hear from Vice President Cheney's chief of staff, Lewis Libby." On MSNBC's "Buchanan and Press" on Wednesday, Pat Buchanan asked an administration critic who claims to know the leaker's name point blank if "Scooter Libby" was the culprit (the critic wouldn't answer). And Republican Sen. Chuck Hagel of Nebraska made a veiled reference on CNBC this week, suggesting that President Bush could better manage the current crisis by "sitting down with [his] vice president and asking what he knows about it."

But below the surface there's even more chatter. Says one former senior CIA officer who served under President Bush's father, "Libby is certainly suspect No. 1."

Libby might feel more secure if the White House would issue a blanket denial about his involvement, the way it did for Bush's top political aide, Karl Rove, who was the focus of attention early in the week as the possible source. At a press briefing this week, White House spokesman Scott McClellan was adamant: "The president knows [Rove] wasn't involved ... It's simply not true."

And later, McClellan dismissed as "ridiculous" any suggestions that Rove may have played a role, adding, "There is simply no truth to that suggestion. And I have spoken with Karl about it."

But when a reporter asked about Libby, McClellan cut him off with a non-response.

"Does [Bush] know whether or not the vice president's chief of staff, Lewis Libby ..." the reporter began. McClellan interrupted: "Do you have any specific information to bring to my attention? Like I said, there has been nothing that's been brought to our attention."

Asked for a comment about speculation surrounding Libby, Cheney's spokeswoman Cathie Martin tells Salon, "This is a serious matter and we shouldn't be speculating in light of an ongoing investigation."

By all accounts, Libby was certainly at the heart of the administration's high-level arm-twisting in the intelligence community, trying to massage evidence to make the case that Iraq was an imminent danger to the world. He and his boss Cheney, along with a cadre of administration hawks, took the lead in trying to sell a number of bogus claims, from the notion that Saddam Hussein tried to buy uranium from Niger to the false assertion that hijacker Mohammed Atta met with an Iraqi spy before 9/11.

The Plame controversy, of course, stems from a New York Times opinion piece written by former U.S. Ambassador Joseph Wilson, Plame's husband, in July. In it, he revealed that in 2002 he traveled to Niger on an assignment for the CIA to investigate allegations that Saddam Hussein was trying to buy uranium from the African nation. Wilson wrote that he reported back that the claims were likely bogus, yet President Bush still included mention of the uranium plot in this year's State of the Union address.

One week after Wilson's Op-Ed, conservative columnist Robert Novak wrote a piece defending the White House, arguing that Wilson's trip to Niger was arranged by his wife, Valerie Plame, "an Agency operative on weapons of mass destruction."

Novak wasn't the only journalist who received such a briefing back in July (five others reportedly got the same tip), but he was the only one who went public with the information. The leak was in violation of a 1982 federal law that prohibits the unauthorized disclosure of the identity of a clandestine intelligence officer. And the guessing game has become heated.

Many of the clues pointing toward Libby come from Novak himself, who's provided a number of details about his source. (Yes, there were two Novak sources, but according to the columnist, after a senior administration source gave him Plame's identity, the second source merely confirmed that when Novak told him he knew.)

For instance, the source "is no partisan gunslinger," according to Novak's Wednesday column. That description would certainly rule out the hyper-political Rove. The "no partisan gunslinger" tag fits Libby better. A consummate Washington Republican insider, Libby rarely throws bombs in the press, or parades in front of the talking-head cameras. Instead, he's considered a behind-the-scenes power broker who bounces back and forth between senior government jobs and his lucrative Beltway law practice. Between 1995 and 2000 Libby served as fugitive billionaire Marc Rich's attorney.

And yes, Condi Rice seems to be off the hook; on TV Novak has referred to his source as "he."

But more significantly, it's important to remember what Novak was looking for when he dialed up his "senior administration source" last July. According to his accounts, Novak wasn't fishing for Plame's identity. Instead he was looking for an answer to the question: Why was Wilson chosen to go to Africa?

Novak told CNN he thought Wilson was a strange choice, since he'd donated to Democratic campaigns and had no experience with weapons of mass destruction.

Wilson's July Op-Ed appeared on a Sunday. "On Monday, I began to report on something that I thought was very curious," Novak told CNN. As he explained in his Wednesday column, "During a long conversation with a senior administration official, I asked why Wilson was assigned the mission to Niger."

The question is, where would have been the logical place for Novak to start his inquiry about Wilson's trip? One obvious answer is in Cheney's office. As Wilson had explained in his column, it was because of Cheney that he was sent to Niger: "In February 2002, I was informed by officials at the Central Intelligence Agency that Vice President Dick Cheney's office had questions about a particular intelligence report. The agency officials asked if I would travel to Niger to check out the story so they could provide a response to the vice president's office."

We don't know whether Libby served as an anonymous contact for Novak inside the VP's office. But courtesy of Time.com, we do know Libby was talking to reporters about Wilson at around the time Novak's column ran.

Headlined "At War on Wilson?" and posted online in July, the Time.com article detailed how since the publication of the New York Times Op-ed, "Administration officials have taken public and private whacks at Wilson." It also noted, "Some government officials have noted [in private] to TIME in interviews, (as well as to syndicated columnist Robert Novak) that Wilson's wife, Valerie Plame, is a CIA official."

In other words, Time.com was getting anonymous administration tips about the same information Novak received. But from whom?

Dissecting the piece, it's interesting to note the three administration officials who were quoted. The first two were then-spokesman Ari Fleischer and CIA director George Tenet. But their quotes about Wilson and his trip were made in front of a group of reporters. The third administration source, whose quote came during "an exclusive interview" with Time, was Libby. He denied Cheney had anything to do with requesting Wilson's trip or that he knew about the former ambassador's subsequent report.

One of the simplest shortcuts in journalism when trying to identify an anonymous quote or source of information is to see who is quoted on the record within in the same story, since often during an interview with reporters, sources will interrupt and suggest a specific fact or quote be on background or off the record. So it's hard not to wonder: During his "exclusive interview" with Time, did Libby, as an aside, pass along the information about Plame, and ask that it not be attributed to him? Or did Time independently confirm the CIA operative's identity from other administration sources, and then talk to Libby? We aren't likely to ever get an answer, but the questions are intriguing.

And there are other small clues. According to a Wednesday USA Today article, "Vice President Cheney and his chief of staff, Lewis "Scooter" Libby, met with officials at the [CIA's] Non-Proliferation Center before the invasion of Iraq to discuss reports that Iraq was seeking to buy uranium in Africa."

Plame works at the Non-Proliferation Center. The paper noted that she did not attend the meetings with Libby, but it's plausible that he found out about her employment while he was there.

Libby and Cheney, in highly unusual moves, visited the CIA several times before the war, in what many observers saw as an attempt to pressure analysts to produce more damaging assessments about Saddam Hussein's arsenal or any connection with al-Qaida.

According to a Washington Post report on Monday, Cheney and Libby continued to press the story about 9/11 hijacker Mohammad Atta's meeting with an Iraqi spy in Prague long after the intelligence community had dismissed it. The two even insisted, on the eve of Secretary of State Colin Powell's presentation to the United Nations Security Council last February, that the charge be included in Powell's indictment of Iraq defying the council's resolutions.

Someone so steeped in CIA intelligence could have been a helpful source on the Plame story.

Several more telling clues about Libby came Wednesday during an MSNBC appearance by Larry Johnson, a former counterterrorism official at the CIA and the State Department.

Earlier in the week Johnson, who calls himself a registered Republican who donated to the Bush campaign, made a media splash with his appearance on PBS's "Newshour" by confirming that Plame did indeed work undercover for the CIA. It was a key assertion because since Novak's column first ran, the columnist had tried to back off the claim he made in July that she was an operative. Instead, claimed Novak, she was simply an analyst -- the implication being, making her identity known was not that big a deal. Johnson shot that theory down, and to date nobody from the CIA, or any other reporter, has come forward to question his veracity (though several critics have noted that his claim that Plame was an operative "for three decades" was implausible since Plame is only 40.)

And when Buchanan asked Johnson point-blank, "Scooter Libby. Now, is Scooter Libby the name you heard?" Johnson said simply, "I'm not going to comment on that."