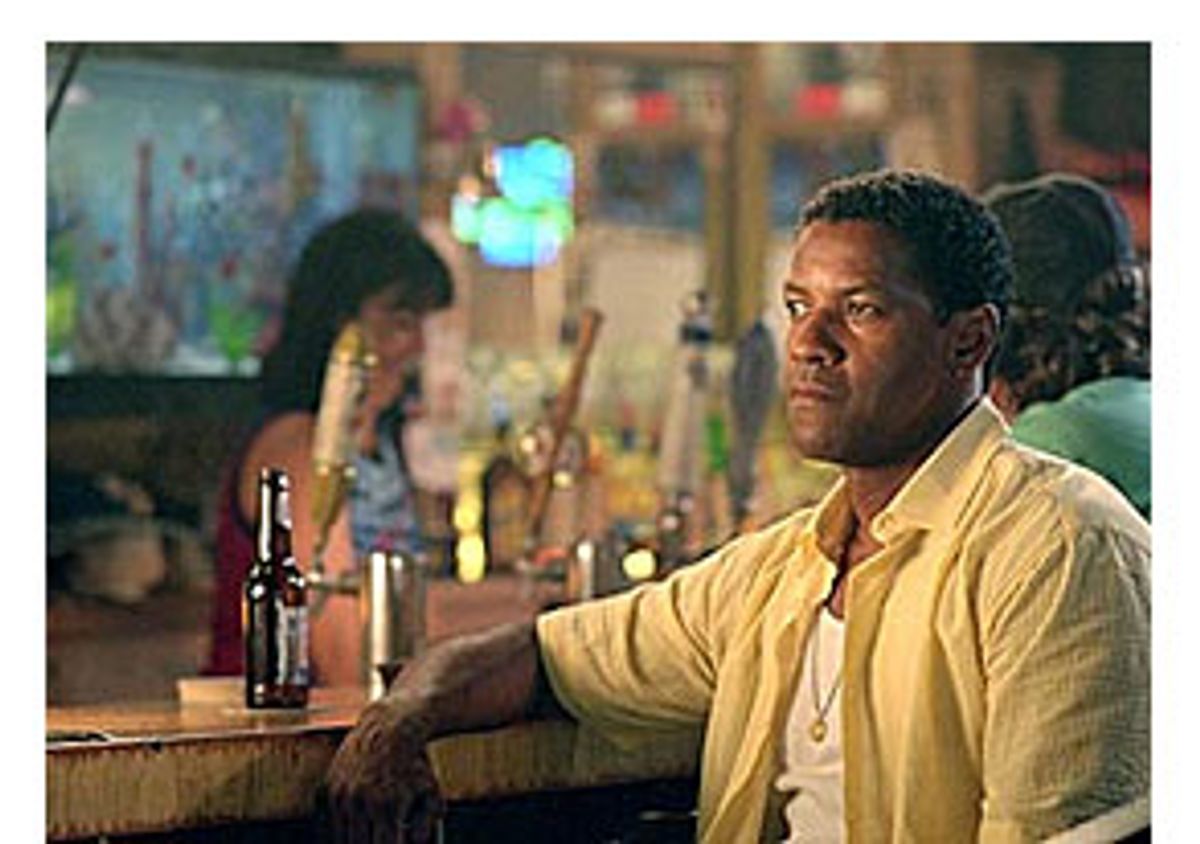 Crafted and crafty, "Out of Time" makes for a dandy evening out. This smart comic thriller might seem just a well-done genre exercise if it weren't such a good example of the solid workmanship Hollywood has largely abandoned. And the movie is modest enough that it can keep you from seeing how director Carl Franklin, doing his best work since "Devil in a Blue Dress," and gifted first-time screenwriter Dave Collard are playing with the conventions of genre (just as they play with racial and sexual conventions). "Out of Time" starts out as noir, takes a shift into something like deadpan screwball comedy and ends up as a comedy of remarriage.

The movie opens with a terrific porno-comic sequence. In the middle of a lonely night shift, Matt Whitlock (Denzel Washington), the sheriff of a small town outside Miami, gets a call about a burglar from Ann Merai Harrison (Sanaa Lathan), the wife of a former pro football player (Dean Cain) now reduced to working as a security guard. When Matt goes to the house to investigate, the burglary story turns out to be one of the little fantasy scenarios Ann cooks up as a prelude to hot sex with Matt. It's the type of fast and nasty sex scene that you don't often get in American movies, and though we don't see much more than Washington and Lathan kissing, Franklin brings the camera close in to them so that we can feast on the hungriness of the kisses. It's funny and sexy at the same time, and Franklin and Collard cap the scene with a satisfying pair of perfectly timed double entendres.

Sex just seems more at home in the humidity of South Florida, where every breath, every movement reminds you of your own body. (Instead of making the tropical pastels pop at you, cinematographer Theo van de Sande mutes them so that every setting -- even the most workaday one -- feels awash in sultriness.) Crime seems more at home in that fetid atmosphere as well.

"Out of Time" is one of those movies you'll enjoy a lot more if you go in knowing as little of the plot as possible, so I'm going to be stingy about the specifics. Needless to say, the combination of Matt's willingness to be led around by his dick, and the $485,000 in drug money awaiting pickup by the feds in his office safe, soon lands him in an incriminating situation.

You can see Matt being set up all through the first half of the movie. Franklin and Collard treat the signifiers of his suckerdom with relish, but the obviousness is also part of the surprise they're waiting to spring. The second half of "Out of Time" is a series of elaborate variations on one good, steadily expanding joke: How Matt uses his position to get out of a series of tight spots. He's like a black Count of Monte Cristo bearing the burden of Sisyphus -- as soon as he fashions one escape, another predicament pops up to ensnare him.

Franklin and Collard have grasped the same thing that Bill Duke realized in his film of Chester Himes' novel "A Rage in Harlem," namely just how close noir is to low comedy. They're both motivated by greed and lust. What Franklin and Collard have pulled off in "Out of Time" is to merge noir with the comedy of infidelity. The Miami police detective assigned to work with Matt is his estranged wife, Alex (Eva Mendes). Not only does he have to hide the evidence that appears to implicate him in the crime they're investigating, he has to hide his dalliance with Ann.

It isn't exactly right to say that this section of "Out of Time" requires delicacy. But it does require crackerjack timing, and plotting that keeps springing like a series of mousetraps that just miss Matt's rear end (as well as other, more tender parts). The suspense Franklin and Collard work up here is the kind that keeps you laughing. Part of the reason it works is that -- unexpectedly -- Denzel Washington makes such a good dupe. Washington is a sometimes-great actor without much playfulness in him and almost no sense of humor. At times, his off-screen reputation as a beacon of integrity has seemed to invade his performances, weighing him down with the sort of virtue that does no actor any favors. That's why it was great to see him throw all that off in "Training Day" and play an out-and-out sleazeball.

What Franklin does with Washington here is even slyer, introducing duplicity into his star's upright, honest-man persona. We're used to noirs that put us in complicity with the guilty man who's trying to keep from being caught. Washington's Matt is the (partly) innocent man who couldn't be in more trouble if he was guilty. He's hero and sucker in one package. Washington uses his usual intense stoicism as the poker face of a grown man about to get his hand caught in the cookie jar. Sanaa Lathan is the cookie jar. In "Love and Basketball" and "Brown Sugar," Lathan showed a talent for playing nice girls without making them icky-sweet.

Here, Lathan gets to use the diversionary melodramatics of Collard's script to parody niceness, and she proves herself a worthy femme fatale. Lathan looks like warm caramel poured into a mold the devil himself came up with for the sole purpose of sending men to their doom. Looking at her, you wouldn't blame any man for buying a one-way ticket.

Lathan has to look that good if we're to believe that Washington would consider leaving Eva Mendes. She has been photographed ravishingly here. Mendes' looks combine the full lips and Roman profile of Gina Gershon with something of the lusciousness of the young Raquel Welch. Her performance in "Out of Time" is, to those of us who saw her hottie role in "2 Fast 2 Furious," a reminder of how bad direction (as in that film) can wipe out even the suggestion of talent.

Mendes' role here requires her to stand up to Washington in scene after scene, a formidable task for any actor, and she pulls it off with a cool assurance and an accusing stare that holds him in its grip like radar locking onto a target. From their first scene together, you understand that Alex is the power in their marriage, and the confidence of Mendes' performance works to make Washington funnier, undercutting his male authority, making Matt seem even more at the mercy of the two women in his life. You know that if she succeeds in getting Matt back, he's going to be a faithful, grateful puppy-dog. And it's fun watching Mendes make Washington wag his tail.

If Franklin is upsetting the usual male/female power balance, he's also playing a subtle racial joke here as well, having fun with the sexual segregation that has ruled Washington's romantic scenes -- part of it his own choice, and some of it due to the prejudices of his fans. (There were reports of black women crying out in dismay when Washington went to bed with Milla Jovovich in "He Got Game.") The love scenes Washington plays with Lathan are the hottest he's ever done. It's the black-on-black sex many of his black female fans want -- and it's also an adulterous affair that lands him in a heap of trouble. Meanwhile, on either side of the affair stands an interracial marriage (Cain and Lathan; Washington and Mendes). Franklin seems to be tweaking the audience here, making a joke that ties into the movie's central comic theme -- the way everything you think you can trust can crumble underneath you.

A good deal of the credit for how well the jokes work in "Out of Time" has to go to Dave Collard. His screenplay is not only a superb example of plotting, but he writes the sort of gags that come out as the natural ping-pong rhythms of the way these characters talk. In particular, John Billingsley, who plays Washington's coroner buddy as a walking monument to grubby ill health, nails every one of the jokes Collard hands him. Collard never sacrifices the logic of character for the sake of a one-liner. And he's content to play out suspense and conflict in dialogue rather than in car chases and fights. There are two fights here, one of them a doozy, with Washington and a baddie hanging from a hotel balcony about to come loose from the side of its building (in this scene, the movie might be venturing into the territory of silent comedy). The picture's climax is the usual violent showdown, and I wish Collard had come up with something better. It's a momentary lapse, though, redeemed by the final scene.

"Out of Time" is a consistent pleasure because it's about what clever and talented people can still bring to mainstream entertainment, and how much fun you can still have with familiar genres by tweaking them. Carl Franklin's career was derailed for a few years when "Devil in a Blue Dress" wasn't the smash hit it should have been. (Reportedly, he and Washington were hoping that the movie would set up a franchise of movies based on Walter Mosley's Easy Rawlins mysteries.) The box-office failure of that movie showed the decay in the sensibilities of mainstream audiences. Had it been made 15 years earlier, it would have been a picture everyone went to see and happily recommended to their friends. It was as if "In the Heat of the Night" had opened and closed in two weeks (and Franklin's was a much better picture). You could feel Franklin trying to do good work in the two movies that followed, "One True Thing" and "High Crimes," but in both cases he was dealing with lousy material.

"Out of Time" is the first good script he's had since "Devil in a Blue Dress," and you can feel Franklin's pleasure in it. An inviting slyness pervades the movie, an invitation to the audience to enjoy its jokes along with him. When you consider how the movie genre-hops, the control of Franklin's direction is remarkable. It's as if he set out to make "Double Indemnity" and then, midway through, switched to "His Girl Friday."