David Steinberg talks about the sexually frank photographs he's collected and how he thinks they can change the culture. 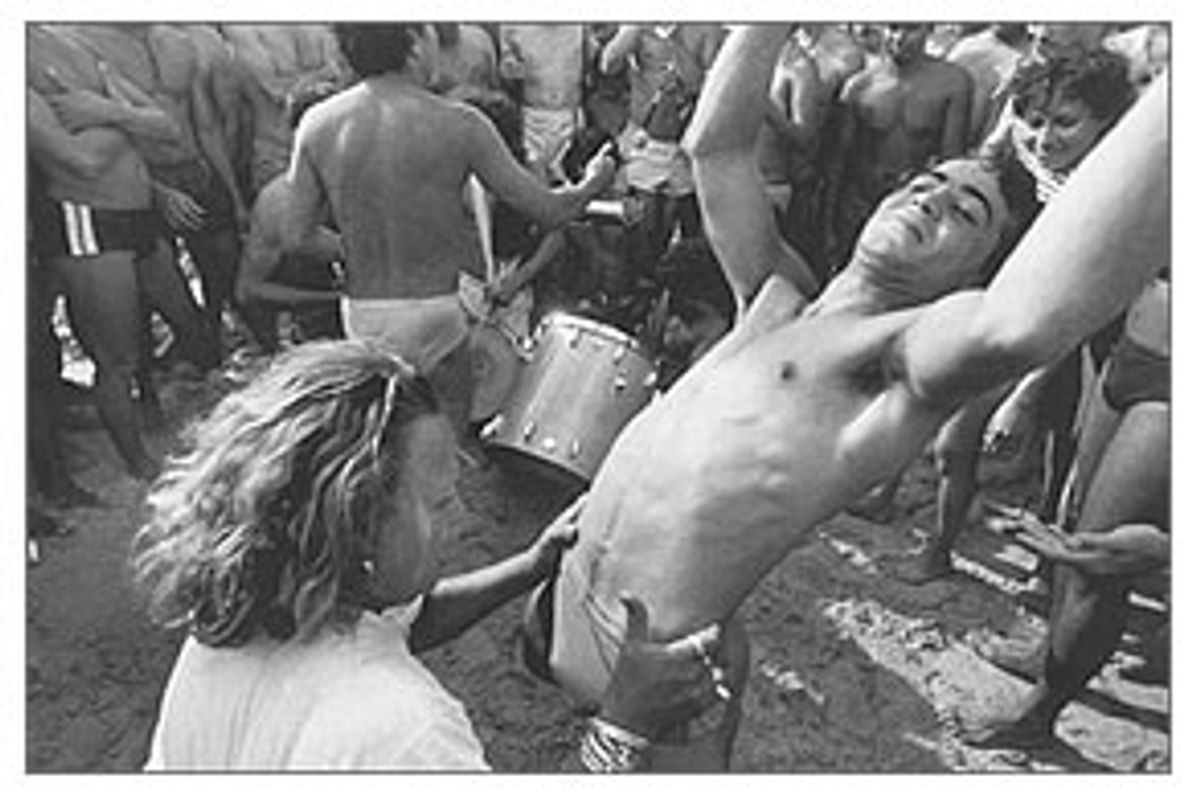 To me, David Steinberg is the Allan Freed of sexual photography. Freed was the pioneering Cleveland DJ who, in the mid-1950s, introduced suburban white kids to the driving beat and emotional authenticity of African-American rhythm and blues. Steinberg is leading an equally daring cultural revolution -- an effort to free sexual photography from decades of wholesale dismissal as "pornography" and have it taken seriously as fine art.

Steinberg is the creative force behind "Photo Sex: Fine Art Sexual Photography Comes of Age," a collection of 115 exuberantly erotic images by 31 of the world's leading sexual photographers. "Photo Sex," says New York photography critic A. D. Coleman, "represents a generational shift in the social acceptability of frankness about sexuality and its representation. It offers tangible evidence that the current administration in Washington in no way represents a majority of this country's electorate, who would, given a fair chance, reject its cultural neoconservatism. It shows us that this country's attitudes regarding matters sexual have changed radically, most probably, for the long term."

Steinberg, 59, grew up in Queens, N.Y., a child of leftist activists. He graduated from high school in 1960, with two passions -- mathematics and peace. "I was a member of the Student Peace Union, the group that invented the peace sign," he says proudly. He attended Oberlin College intent on becoming a math professor, but became a civil rights activist instead. He switched to political science, and wound up working in Washington, placing college students in community organizing projects in impoverished areas around the country.

A fascination with the counterculture led Steinberg and his wife to San Francisco. In 1972, they moved 60 miles south to Santa Cruz, a beach and university town that, in recent years, has become a suburb of Silicon Valley. Steinberg bought and expanded a small business that distributes culinary and medicinal herbs to health food stores and restaurants, which he still owns. He also began writing about sexuality, and became a cornerstone of the Bay Area's burgeoning sexual underground with, according to San Francisco TV station KRON, a "cutting-edge reputation for the erotic." He currently writes a monthly column, "Comes Naturally," a commentary on sexual culture and politics.

Salon interviewed David Steinberg in the San Francisco offices of his publisher, Down There Press, an offshoot of the woman-friendly sex shop Good Vibrations.

Your subtitle proclaims "Fine Art Sexual Photography Comes of Age." But photographers have documented sex ever since photography was first invented. What do you mean that sexual photography has "come of age"?

I believe that fine-art sexual photography has come of age because, for the first time, sex is being taken seriously and seen as a legitimate subject for complex and artful photography. The resulting -- and rapidly expanding -- body of sexual photographic work is delightfully imaginative and diverse. It's as far removed from the conventions and limitations of pornography as it is from the photographic conventions of nonsexual photography. Unlike porn, which is remarkably uniform in its emotions and aesthetics, the styles and interests of the photographers in "Photo Sex" are as different from each other as Picasso is from Monet. I find that very exciting. It says that there's more than one way to be sexual, more than one way to be sexy.

Sex is such a complex and important part of life. Does anyone really understand it? What makes it so powerful, so confusing, so exciting, so frightening? It's more than lots of nerve endings firing at the same time.

One of the functions of art is to talk about big, complex issues in big, complex ways -- to help us appreciate life in ways that are unreachable through academic treatises, technical manuals, or literal narratives. What's revolutionary about fine-art sexual photography is that it applies the intelligence we associate with fine art to the complicated subject of sex.

The book includes the work of 31 photographers. How did you find them? How did you decide whom to include?

The final criterion that let me get the book down to workable size, suggested to me by my good friend, photographer Mark I. Chester, was to demand that each photograph make a unique contribution to the book, that it have a particular magic no other photograph had.

Can you describe the range of sexual imagery in "Photo Sex"?

I hope viewers will think of the people in the photos as people like themselves, even if the ways they express themselves sexually might be very different from viewers' own sexual tastes. It's not my desire to shock anyone, but at the same time I didn't want to restrict "Photo Sex" to images that everyone could view without any discomfort. I want it to celebrate sexual variation. There are heterosexuals, gay men, lesbians, bisexuals, transsexuals. There are young and old people, fat and thin people, people with disabilities, people from a wide range of races and ethnicities. There are couples, people alone, threesomes and groups, people having sex in the privacy of their homes, in sex clubs, even out on the streets.

Some of the photographers focus on tenderness and intimacy, others on fierceness and intensity. Some images are softly focused, others sharply graphic. There's humor, sadness, irony, strength, vulnerability -- the whole gamut of emotions involved in being sexual. The photographers express their own particular fascination with sex in their own unique ways.

What about Robert Mapplethorpe? Why doesn't his work appear in "Photo Sex"? What do you think of it? Is it fine-art sexual photography?

Oh, yes, definitely, Mapplethorpe's work is fine art. He was a very significant figure in the trend toward fine-art sexual photogaphy. I saw his retrospective at the Whitney Museum in New York in 1988, and was completely blown away. His images were so sexual, and so controversial, and they were being shown in the hallowed halls of a major museum. It's not every day that you see huge beautiful photos of people having oral sex, or engaged in S/M at the Whitney. On the one hand, his show was a major breakthrough -- and I should add that everywhere it appeared, the public liked and supported it. But, on the other hand, it generated enormous political and legal controversy because it coupled the S/M images, which were controversial enough, with two nonsexual photographs of naked toddlers. The upshot was that, in Congress, Jesse Helms attacked the show. The Corcoran canceled it. And the curator of the Cincinnati Art Center was brought up on obscenity charges. He was acquitted, but that kind of controversy set fine-art sexual photography back because it made -- and still makes -- galleries and museums reluctant to show this type of work.

I wanted to include some Mapplethorpe photographs in "Photo Sex." But unfortunately, his estate wanted more for the rights than I could afford, so I couldn't include him.

A few of your photos appear in the book, exuberant shots of joyous sexual play, your subjects often sporting broad grins. How long have you been taking sexual photographs? What are you trying to show? And how do you persuade couples to make love with you standing over them?

I'm probably the least experienced photographer in the book. For Cupido, I've brokered thousands of sexual photographs by hundreds of photographers. I like their work. But inevitably, their perspectives are different from mine. For a while, I tried to coax the photographers I knew best into capturing what interested me most about sex -- intimacy, tenderness, love, joy, the emotional connection between lovers, more than their physical coupling. But of course, they wanted to pursue their visions of sex, not mine. So I decided to try my hand at creating the kind of sexual photographs I wanted to see.

I'd taken family photos and vacation snapshots all my life, and people told me I had a decent eye for composition. But I never saw myself as a photographer. I had almost no technical training. But I was intrigued with the question of how to get people to be comfortable, real and sexually open in the presence of a third person and a camera.

I asked some friends if I could photograph them, and they agreed to be my guinea pigs. We did a long shoot -- all afternoon and into the evening. We had a wonderful time and, to my surprise, produced some images that captured their sexual connection. When I showed the prints to other couples, several asked to model for me. The same thing happened. The couples were all able to be remarkably open, even though I was fluttering around them, moving lights, sometimes standing practically on top of them, snapping away. Each couple was different, but from each shoot, something genuine and personal emerged.

Cupido began publishing my photographs. They even put one on the cover. That was tremendously validating. Since then, sexual photography has been at the center of my creative life. In the last four years, I've photographed 40 couples, and I'm finding that other magazines and book publishers are interested in my work.

None of the subjects in the book are professional models. They're all ordinary people. Why does fine art sex photography focus on ordinary folks?

If fine-art sexual photography is, indeed, "coming of age," then are art and photography galleries more interested in showing it than they were, say, 10 years ago?

Most museums, galleries and photography publications are still very afraid of sexual images. Many of the photographers in the book have told me of going to photo shows where gallery representatives and museum curators say they love their work but could never show it. I hope that the collective power and beauty of the images in "Photo Sex" help legitimize sexual fine-art photography, but it's definitely an uphill climb.

There has already been one exhibit of prints from photo sex at a small San Francisco gallery, and Good Vibrations in San Francisco is going to exhibit them through the end of the year. Several other traditional galleries are considering mounting shows. I'm keeping my fingers crossed.