When the world is asleep and I am feeding him with my body, I want to protect my boy from everything that could hurt him. But my memories keep getting in the way. 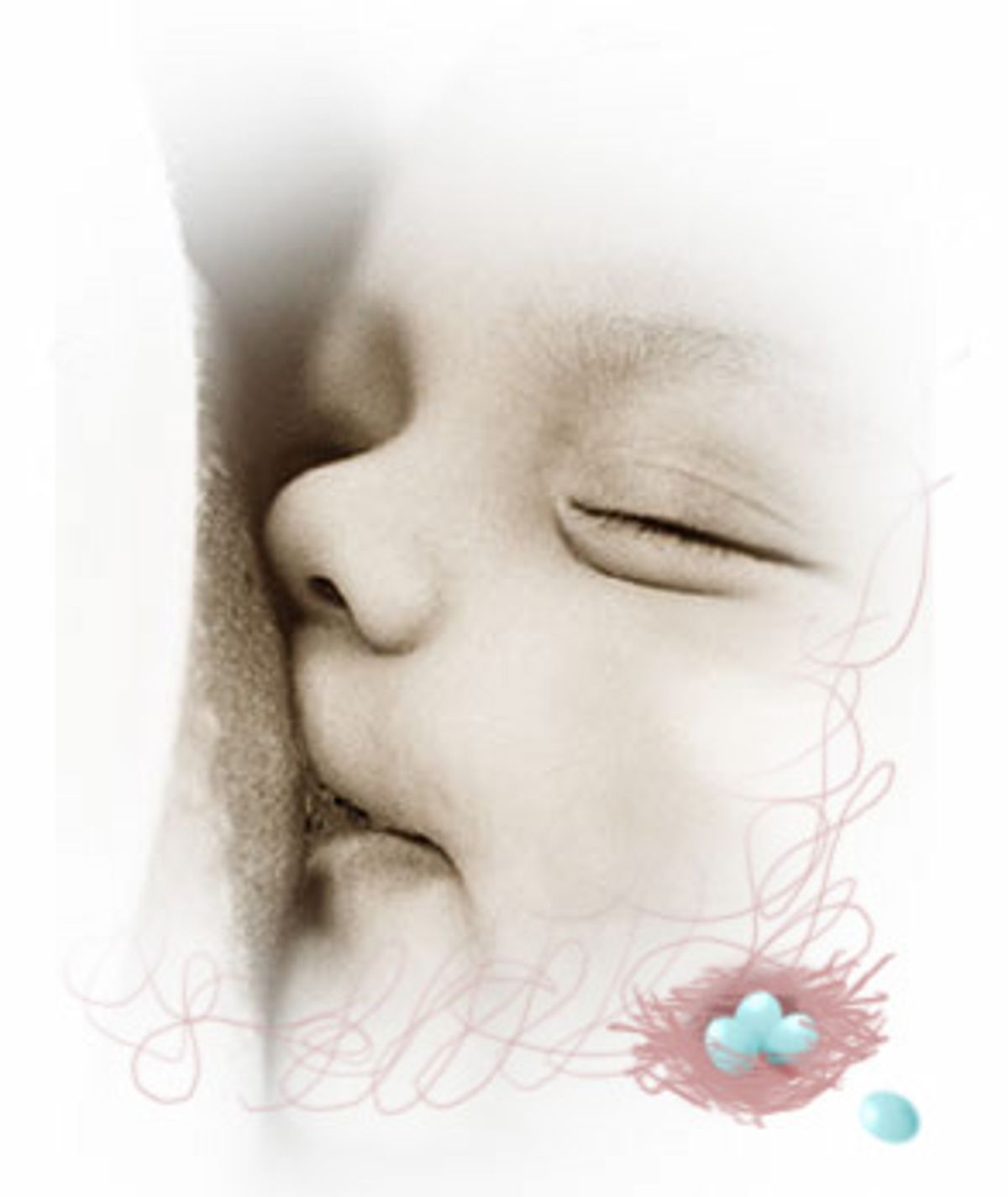 When I was growing up we had a milk box on our front porch. It was made of aluminum and insulated with white plastic. Every week four tall, rectangular bottles of milk would appear in the box. They would always come early enough in the morning that no one in my family saw who brought them. I remember how you could almost tell when the box was full. It seemed more solid, like a filled-up cube, and the lid didn't make such a hollow sound when you opened it. The bottles grounded it, kept it from floating off into the yard and down the street. Years later, after my father moved out, my two older brothers started riding motorcycles and smoking pot, and my mother was buying milk at the store on her way home from work, the box remained on the front porch, empty and unused. Sometimes the lid would blow open in the wind. Sometimes dried leaves would gather in the bottom of it.

Our son is hungriest at 3 a.m. and it's then that his tiny mouth takes to my breast like a piston. His body lies across my lap, the only movements his jaw and throat, the only sounds his gulping and panting, like he can never get enough. I try to imagine him all grown up. I think: Someday you'll be 6-foot-2 like your dad and you'll tell me to leave you alone, and I'll want to tell you about these nights. I'll want to say: While the whole world slept, I fed you with my body.

A week after our son is born my mother tells me she doesn't remember what my brothers and I were like as babies, that she was so depressed during her 18-year marriage that the period is a blur. I can only imagine what those years were like. I imagine she cried waiting for my father to come home from work and after faculty dinners when she couldn't think of anything interesting to say. I imagine exhaustion enveloping her like heavy sheets. I imagine she didn't have the energy to talk when she fed me, that she held a bottle to my mouth and just stared at the chaos and emptiness around her.

The milk often appears in little drops, like pearls, on the tips of my nipples. That is the most surprising thing of all, standing in the bathroom after a shower, my breasts blooming with white liquid. The first time it happened, I couldn't resist pressing the milk to my finger and tasting it. It was sweet and thick and vaguely oily, like custard before it gels. It felt like an accomplishment the likes of which I'd never before achieved. Now I see our son's body lengthen, his fingers and toes grow pudgy, his chest become a small, fat barrel, and I think: I did that.

I was about 6 when my brothers and I held a secret meeting in the basement. They wanted to send our parents on a "second honeymoon" to save their marriage. It was the first I'd heard of any problem, but they, a 13-year-old and a 15-year-old, could tell something was wrong. The second honeymoon never came about, and in retrospect it was a desperate dream of boys trying to be men. A year later our father moved into an apartment, and the centripetal force that had kept our family together began to give way, leaving each of us to spiral from the center, which we would orbit from some great, broken distance for the rest of our lives.

I become convinced that my milk is causing our son's colic. Sometimes he suckles frantically for five minutes, then pulls away, shrieking. I begin to think of my sweet, rich milk as acid, burning his tiny stomach. My husband sits on the floor beside the rocking chair and counsels me coolly. He says to keep trying, it will get better, and I both love and pity him for this optimism. As my nipples bleed and burn, I suck my tears as far into me as I can. I chatter as he nurses. I sing lullabies I can't remember all the words to. I smile hard, all teeth. This becomes my goal: To shelter our baby from my pain.

In time my nipples begin to heal, the burning giving way to the lapping sensation of his small, soft tongue. Around four months, the colic goes too. Nursing now feels like a hard-won battle, but beneath my triumph lingers an anxiety borne of his frequent and startling shifts in mood. I watch other mothers holding their babies with such calm and ease as ours squirms from me like an oiled seal, his tiny hands clawing the air as his head slams from side to side. I begin to worry, secretly, that he is mad.

When I was 19 my brother Matt killed himself. Lay himself in prayer across a railroad track in the woods near his apartment, tons of racing steel an unfathomable kind of mercy. He had been diagnosed as manic-depressive in college and then began a near-decade-long slide into complete psychosis. But, despite the horror of those years, it was a nightmare he had when I was 5 and he was 12 that haunts me most.

I wake in the middle of the night. Matt is screaming in the bedroom across the hall. Urgent footsteps, then a tender slice of light beneath my door. I peer out. My parents are at the foot of his bed. They are trying to comfort him, but he is sitting upright, screaming. "The dogs!" he cries. "They're biting me with their fangs!" It is the first time I know he is not well. The first time I see my parents' helplessness. My father tells me to go back to bed. Matt's nightmares become our family secret.

My husband reads to our son every morning after I've woken to feed him and gone back to bed. I lie there and listen to them in the other room: my husband playing out characters in books I've long since forgotten, our son cooing, laughing, and roaring in response. When they are done, my husband carries him into our bedroom and swoops down to present him like a gift.

During night feedings our son's blue eyes are wide as quarters. They stare up at me as his small O of a mouth envelops my aureole. I look into his eyes and tell him how good his life will be. I tell him he has a mother and a father who will love and protect him with every ounce of their lives. That we will always be a family, and he will always have enough. But he is only 6 months old. He has yet to have a need unmet, to know a promise broken. And so he watches me with the steady gaze of a wise, old man. As if he has already figured out that I'm the one who's thirsty.

Katherine Ozment is a freelance writer living in Cambridge, Mass.