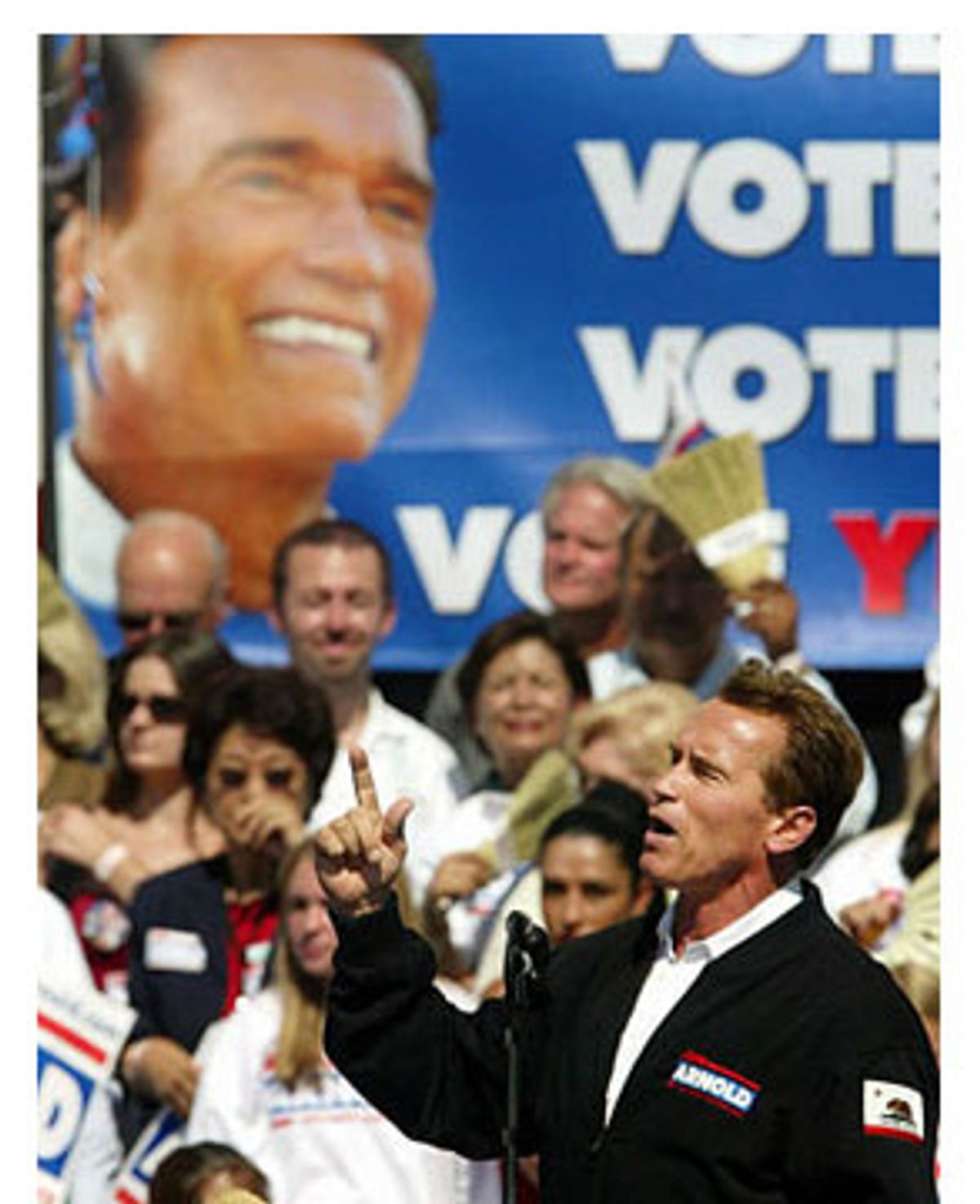 They come one after another, relentlessly, and -- like some crazy California combination of the names on the wall at the Vietnam Veterans Memorial and those chocolates that kept coming down the conveyor belt too quickly for Lucy to handle -- it is the sheer number of them that ultimately becomes overwhelming.

That was Thursday. On Friday, three more women told the Times of unpleasant encounters with the man who would be governor. Collette Brooks said that Schwarzenegger grabbed her butt and said "nice ass" when she was a 23-year-old intern at CNN. Linnea Harwell, an assistant director on Schwarzenegger's 1988 film "Twins," said the actor regularly stripped naked in front of her and once tried to pull her into a bed when she was waiting for him to sign paperwork. Carla Baron, a stand-in on "Twins," said Schwarzenegger bent her over and rammed his cigar-flavored tongue into her mouth.

By Saturday, four more women had added their names to the list. A 51-year-old woman told the Times that she met Schwarzenegger in a recording studio in 2000; minutes later, she said, he pinned her to his chest, spanked her five or six times, then said: "This is what should happen at your house every morning." Tamee Smith, 46, said Schwarzenegger grabbed her breast during the filming of "Predator" in 1986. Jan Prinsmetal, 50, said Schwarzenegger reached up her skirt and grabbed her butt outside a gym in the 1980s. And Elizabeth Rothner, a 45-year-old schoolteacher, said Schwarzenegger lifted her shirt and exposed her breasts to a crowd of people inside a Santa Monica bar in 1979.

Margaret O'Hair has heard all about these allegations, and she knows what she thinks. "You know what?" she said Sunday in Sacramento. "Nobody's perfect."

California voters will go to the polls Tuesday to decide whether to recall Gov. Gray Davis -- and if they do, to choose a replacement for him. Polls released last week showed the recall winning and Schwarzenegger handily beating his replacement-candidates rivals, but that was before the Los Angeles Times began running a series of stories documenting Schwarzenegger's mistreatment of women over the last 30 years. Now the race appears to be tightening: A Knight-Ridder poll released over the weekend showed a dramatic softening in support for the recall, and a Davis spokesman told Salon Sunday that an internal Davis campaign poll has the recall trailing for the first time in months.

But you wouldn't have guessed any of that Sunday in Sacramento, where thousands of Schwarzenegger supporters joined their man in a red, white and blue march on the state Capitol. What the world knows now about Arnold Schwarzenegger -- the allegations of groping and grabbing (allegations that Schwarzenegger, by apologizing for his behavior, has generally confirmed), the obnoxious comments about shoving a woman's head in the toilet and seeing the rare woman who is "as smart as her breasts look," admissions about group sex and drug use, statements that he had a certain admiration for Adolf Hitler -- would be enough to crush the candidacy of any mortal man. But Arnold Schwarzenegger is not just any man -- he's an action-adventure hero, damn it, and the candidate with the best chance of returning California to Republican control -- and Schwarzenegger's supporters are standing by their man as the white knight who will soon restore moral luster to the Golden State.

"I'm supporting Arnold Schwarzenegger because he is representative of a whole wave of feeling that is going across California right now," said O'Hair, a schoolteacher from the Sacramento suburb of Roseville who hauled her own kids downtown to see Schwarzenegger at the Capitol. O'Hair said she is sticking with Schwarzenegger despite the allegations against him because she believes he is a "changed man." Given that the L.A. Times has reported allegations of abuse as recent as 2000, it is not clear when, exactly, that the actor might have changed. For O'Hair, it doesn't matter.

Faith is a central component of the Schwarzenegger campaign, although not the religious kind that drives many Republicans candidacies these days. In fact, the religious right's candidate of choice in this race is Calif. Sen. Tom McClintock, a straight-talking, anti-abortion conservative who refused to drop out of the race in the face of the Schwarzenegger juggernaut and who is now poised to benefit if Republican voters find the latest allegations about Arnold too much to stomach.

Rather, the faith that drives the Schwarzenegger campaign is the faith that he is what he says he is -- a fiscal conservative and upright family man -- despite all sorts of evidence to the contrary. Outside Team Arnold, there is plenty of skepticism on both fronts. Conservatives worry that he's too much like George Bush I, or even worse: a candidate who will win office as a fiscal conservative but then wind up raising their taxes. Liberals worry that he's too much like George Bush II: someone who will campaign as a social moderate only to become a tool of the hardcore religious right.

And in the middle, there are people like Kerry Martello and Carol Stanley. Martello is a 22-year-old college student who has volunteered to work on the Schwarzenegger campaign. Asked last week why she supports Schwarzenegger, she cited his open-mindedness, "his willingness to look at California as a business, his new and innovative ways to make it work." What are some of those new and innovative ways"? "Well," Martello said, "treating the state like a business. He says you can save, you know, millions of dollars if you just run it like a business."

Stanley, a somewhat older Schwarzenegger fan from Sacramento, turned out to see her candidate at the march on the Capitol Sunday. Asked about her support for Schwarzenegger, she said: "I like what he stands for. I think he's going to get the power back to the people; maybe we'll get to do what we want with our money instead of the government making all of the decisions for us." Pressed for a specific Schwarzenegger policy position she likes, she said: "It would be better if you talked to my husband."

It's a recurring theme when you talk with Schwarzenegger supporters. They're passionate for their candidate, even if they don't know exactly why. "Everybody who supports Tom McClintock has a policy reason for supporting Tom McClintock," says Mark Williams, a conservative radio talk show host in Sacramento. "But I've rarely spoken with an Arnold supporter who knows why he wants Arnold to win -- except that he wants him to win."

Williams talks with Schwarzenegger supporters every night on his show, and he is convinced that support for the actor is wide but thin. "If you took a stroll through it, you wouldn't get your ankles wet," he said. "There isn't a lot of thought to it. As the campaign goes on, people find reasons to support him. But initially, it's because A) he's not Gray Davis, B) he can win, and C) he's Arnold."

That's how it is initially for some supporters, and that's how it stays. After years of running hardcore conservatives for statewide office -- and losing each and every time -- California Republicans see in Schwarzenegger a more moderate voice who can roll to victory Tuesday. And for many of them, that's enough to let them hold their noses and vote, even as the unseemly allegations keep pouring forth.

Brian O'Neel is one of these "just win, baby" Republicans. As press secretary for Tim Leslie, one of the most conservative members of the California Assembly, O'Neel said he would naturally be more inclined to support McClintock in this race. Instead, he's backing Schwarzenegger. It is, he says, "purely a prudential thing -- he can win."

Still, there comes a limit, and the allegations in the Times' stories push Schwarzenegger close to it. O'Neel -- who spoke to Salon just after the first round of groping allegations came to light -- said the scandal surrounding Schwarzenegger "bothers me in the sense that it would bother me if I heard that about anyone. The ideal is that your leaders have character and principles and values and virtues, but the fact of the matter is that these things happened a long time ago, he seems to be a great family man now, and -- my goodness -- if they were going to hold things against me I did 20 years ago, we'd all be in trouble."

Of course, not all of the news about Schwarzenegger is nearly that old. As already noted, some of the allegations of inappropriate sexual behavior are as recent as 2000, and Schwarzenegger's dismissive and insulting comments about women run straight into the summer of 2003. The recent nature of some of Schwarzenegger's conduct seem to come as a surprise to some of the Schwarzenegger supporters at the march on the Capitol Sunday; they had heard the campaign talk about "ancient history," and they had believed it.

But for many others, the allegations would plainly be meaningless whatever they were and whenever they appeared. Pamela Barnett and Arlyn Eaggot are mortgage loan officers from San Francisco, and they walked through the campaign stop in matching his and hers "Join Arnold" T-shirts. Although the Los Angeles Times has said flatly that no one from the Davis campaign led reporters to the women who said they have been groped by Schwarzenegger, Barnett and Eaggot don't buy it.

"This is just Gray Davis and the normal sleaze tactics he uses when he's running for office," said Barnett, 32. Eaggot, who is 32, says the allegations are "politically motivated." Does that mean that he thinks the women are lying? "Yes." All of them? "Yes," he said, I think it's a coordinated effort."

Barnett and Eaggot make much of the fact that many of the women have not come forward until now -- and that none of them apparently filed police reports.

Catharine MacKinnon, law professor at the University of Michigan and the University of Chicago and a national expert on sexual harassment, said it is wrong to read too much -- of anything, really -- into the fact that the women did not come forward sooner.

"When women are raped they don't go the police by a 10-1 ratio," MacKinnon told Salon Sunday. "It appears that these women came forward now because they were found. That's the way it was with Anita Hill and a lot of other women who have come forward at various times; a man [who has abused them] is coming into promience, and someone finds them and asks them a direct questions and they answer truthfully."

MacKinnon read the stories from the Los Angeles Times Sunday, and she said she was struck by the fact that Schwarzenegger seems amused by his misbehavior. MacKinnon noted that the women who have come forward invariably say that Schwarzenegger laughed when they objected to his conduct. "I find particularly chilling this reaction of laughing when they defend themselves," MacKinnon said. "He thinks women's outrage at what he's doing is funny. He has a pleasure response to it, and that's chilling."

That's certainly how Marilyn Shirey feels about it. Together with her 15-year-old daughter Elizabeth, Shirey attended the Schwarzenegger rally in Sacramento Sunday in silent protest. Between them, they held a sign that said: If Schwarzenegger wins, women lose." Looking out at thousands of people -- many of them women -- sporting "Join Arnold" stickers and T-shirts, Shirey was all but at a loss for words.

"I look at the women out here, and I think, What are they thinking?" Shirey said. "If you wouldn't leave your daughter, your wife, your aunt alone in a room with him, why would you elect him as governor of the state? What does that say to the women of this state -- let alone to the men who care about women in their lives?

Tuesday night, Californians may find out.