"The Real World" kids grow tiresome, while the older ladies of "Starting Over" are mind-blowingly melodramatic. Plus: A chat with reality TV's big winner. 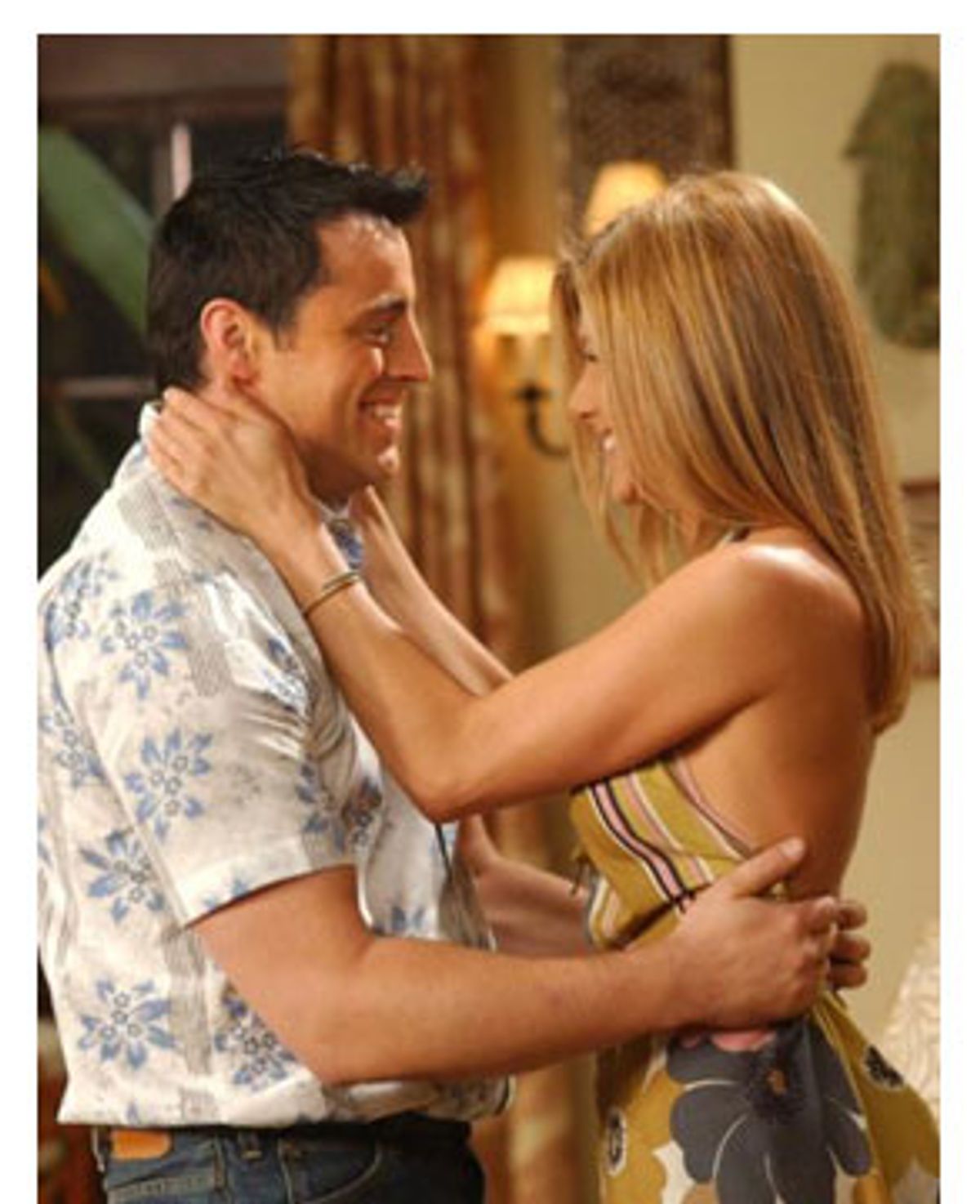 The "keepin' it real" world

Despite the usual cast of self-involved miscreants, "The Real Word: Paris" has been très ennuyeuse this season, offering very little outside of the typical "You're such a slob, you're so insensitive, how dare you eat the last of my peanut butter" squabbles that feel positively archaic in the face of, say, the edgy marital quarreling of Nick and Jessica on "Newlyweds," or the blooming telegenic romance of Keith and Tara on "Drunk Asshole Hotel." But until we meet the international freak show of the second "Joe Millionaire," we've had to content ourselves with these ugly Americans, tromping and braying through the streets of Paris and working themselves into a lather over lost passports and totally no-fair working conditions.

In the beginning, of course, the assembled strangers looked promising indeed. Garrulous Southern boy Ace immediately fell in love with beautiful drinker Mallory, while pouty brat Leah whined softly from the sidelines. Womanizing dork Adam and the witty gay Irishman, Simon, were both too smart not to keep their most scathing judgments to themselves, but Christina seemed short-tempered enough to more than make up for their self-control. And thrillingly, the thick-skulled, barely housebroken C.T. demonstrated his complete confusion about human beings outside his family circle within hours of arriving -- not surprising, given his mother's horror over the fact that he would be forced to fly on a jet plane to some scary overseas location populated by foreigners and terrorist types.

The casting of this show has always been focused on pulling together young people from wildly different backgrounds, often with fascinating results. But shocking as it is to catch a glimpse of just how insular and close-minded the environments these kids grow up in can be, and gratifying as it is to watch them shed their former beliefs and embrace a wider world out there, there are only so many times we can see the virgin deflowered, the bigot enlightened, and the obedient son questioning his parents' restrictive rules for the first time. Maybe the fine reality pioneers behind "The Real World" should consider some more complicated, challenging narratives for the next show. Throw some different types into the mix: a melodramatic tattoo artist, an aspiring psychotherapist, a brooding poet, a mathematical genius. Give us a soup of bizarre, super-intelligent characters who are sure to have conversations about topics a little more intense than who squeezed the toothpaste from the middle of the tube.

Or, don't. You are on MTV after all, a network that's spent the last decade chasing the coveted lamebrain teenager demographic instead of building on an established audience of creepy hipsters and music lovers who, old-fashioned as it sounds, actually enjoy watching music videos every now and then.

Ah, well, at least that spoiled freak Leah is finally being treated with the contempt that she deserves.

It'll be just like starting over
And just as I'm espousing the merits of casting complicated weirdos on reality shows, a helpful reader pointed me to "Starting Over," a riveting train wreck of a syndicated daytime show that's sort of a "Real World" for the Oprah set. Six relentlessly self-involved women in crisis are chosen to live in a house together and find out what happens when people stop being real, and start being petty, hysterical, overly analytical and mind-blowingly melodramatic. Naturally, from the first few seconds of the episode I saw, in which one woman accused another of "trying to undermine the trust that I'm trying to create," I was a huge fan.

In addition to living together, each of the six women are assigned a life coach, which is sort of like a therapist except with less arbitrary and highly subjective talk and more arbitrary and highly subjective instructions on how to improve their lives. The perspective of the coaches is excessively female: tomboy Cassie is assigned etiquette lessons despite her insistence that she couldn't care less about being more "ladylike," while shrill, proud Nyanza spends a day in a wheelchair to get her to feel comfortable depending on others for help. Meanwhile, dorky Lori is urged to make a list of 100 traits she'd really love to find in a man. While I can think of no better way to find a man than by pulling together an incredibly detailed set of criteria that no mortal man could ever satisfy, it was pretty fun to pause the TiVo to get a closer look at Lori's list ("50. Good memory for daily events; 51. Not afraid of germs").

But in case you think that using the right fork, being dependent, or making lists of ideal traits in a man isn't what being a woman is all about, don't forget the group therapy sessions, in which a room full of complicated women take simple issues and make them more and more complicated until everyone is angry or upset. True, these women are feeling a lot of real frustration and hurt, but rest assured that, when they dial the melodrama up to 11, you'll be laughing through their tears. When Nyanza asserts, "One of the things I know about me is that [she begins to cry] if I love somebody, and if I'm their friend, I believe in common enemies..." and then storms off, leaving everyone in the room looking depressed, and then the clinical psychologist sums up by announcing, "I think this is the start of something important," it's enough to make you swear off therapy forever. But who needs therapy when you can watch this cathartically psychotic show instead?

Nothing's shocking
Recognizing that countless Salon readers are also rabid fans of MTV's extreme sports enthusiast Dan Cortese, I took some time out from my very taxing reality TV schedule to check out his new sitcom on UPN. It was a sacrifice, but imagining the tens of thousands of you who follow Cortese's career closely taking a break from crocheting tiny "I (heart) Dan Cortese" teddy bear sweaters long enough to read my review was a reward in and of itself.

On "Rock Me Baby," Cortese plays a Howard Stern-style shock jockey (Jimmy) who's stuck somewhere between adolescence and a different kind of adolescence that includes raising a child. Forced to choose between pleasing his dull wife and heeding the siren call of his dull friend, Jimmy is left feeling very indecisive indeed.

When animals can't decide between two appealing options -- eating, say, and evading danger -- sometimes they'll engage in a third, somewhat arbitrary act like sniffing their butts or pecking at the ground or, in Cortese's case, staring blankly into the middle distance with a half smile on his face. This is known as displacement behavior, and you can't really blame him for it. After all, as you menfolk know all too well, it's real tough to obey your wife and stuff when you'd really rather be fucking whores in Vegas.

The jokes here alternate between crappy guy's-guy gibes and the very worst kind of sitcom inanity, but I won't go into too much detail, because this show will most likely be canceled before you get a chance to see it. Thank God you stole that life-size cutout of him from a "Veronica's Closet" party back in '97, huh?

So, now that we've cleared that up, I can confess that I fully expected this item, about David E. Kelley's "The Practice," to focus on how boring and crappy most law-related shows are, how "The Practice" lost its way years ago when they started including storylines about that dumb teenager in the office, how they should never have focused so much on Bobby and Lindsay's eternal love (although I always thought their fights were incredibly realistic), and how they screwed up when they started limiting themselves to only those cases populated by clients who would also make good guests on "Dr. Phil." I was going to say that James Spader is obviously incredible, but what use does David E. Kelley have for that old google-eyed sociopath routine? The man can act, no doubt about it, but sticking Spader on "The Practice" is like making DeNiro a detective on "CSI" -- the association would only demean both the actor and the show.

See how many ideas I had before I even saw Spader on "The Practice"? That's media bias in action, the formulation of a hypothesis without any concrete data to back it up. We lunatics who work in the media are great at that.

But here's the catch: Bobby, Lindsay, and the dumb teenager are gone, Spader is absolutely, mind-blowingly fantastic, and now a show I once loathed is so good, I can't decide whether to TiVo it or get HBO's "Carnivale."

How is that possible? Well, instead of trying to turn Spader into Mr. Likable, they let him play ... you guessed it! A google-eyed sociopath! Here's Spader's character, Alan Shore, in action, explaining a strategy to the show's resident dimwit, Jimmy (Michael Badalucco):

Alan: "Now, if we don't settle, I'd like to have you second-chair the trial. Your plain-folks style could be an asset. A lot of jurors today relate to the phonetically challenged."

Alan: "I mean that as a compliment, Jimmy. You're the everyman."

Who knew that Spader could singlehandedly turn "The Practice" into a dark comedy? "You seem upset," he intones calmly to a screaming defense lawyer. "However... Mmm, one of my favorite words, however!" he coos sadistically when he knows he's holding a trump card. As it turns out, nothing could breathe more life into "The Practice" than an eeeeevil lawyer.

The king of "Paradise" goes to Vegas

Recognizing that we were cast out of "Paradise Hotel" a full week ago, and that I should try to confront my loss and move on, I just couldn't resist calling Keith, the winner of the money and the girl, Tara. You'll notice, though, that I did resist asking him what he was wearing. I really wanted to know, too.

Did you and Tara have a plan for staying in control in the face of all that insanity?

It was tough. Every time something would happen we'd go and say to each other, "We're better than this. We've gotta have control." You know, I don't want to be that way in my life. I want to have control over me and I don't want anybody to ever get to me.

What do you think of Charla's decision to keep the money?

I think it's selfish and self-centered.

Yeah, of course I was! Us four [Keith, Tara, Charla and Dave] did it together. Regardless of anything, us four did it together. Without any one of us, none of us would've made it. I don't know. I just feel that Dave deserves a lot better. I think it was wrong.

Did you think she might end up keeping it?

No! I thought she would give it to him. I thought for sure she would. I don't know what type of person does that. I have no idea. I don't understand it. It makes me mad.

So, are you still taking everyone to Vegas, which you announced you'd do at the end of the show?

No. I was completely caught up in the moment. You know, I just ... took it back. I took Tara instead.