George Clooney and Catherine Zeta-Jones square off deliciously, but this '30s-style battle of the sexes from the Coen brothers never catches fire. 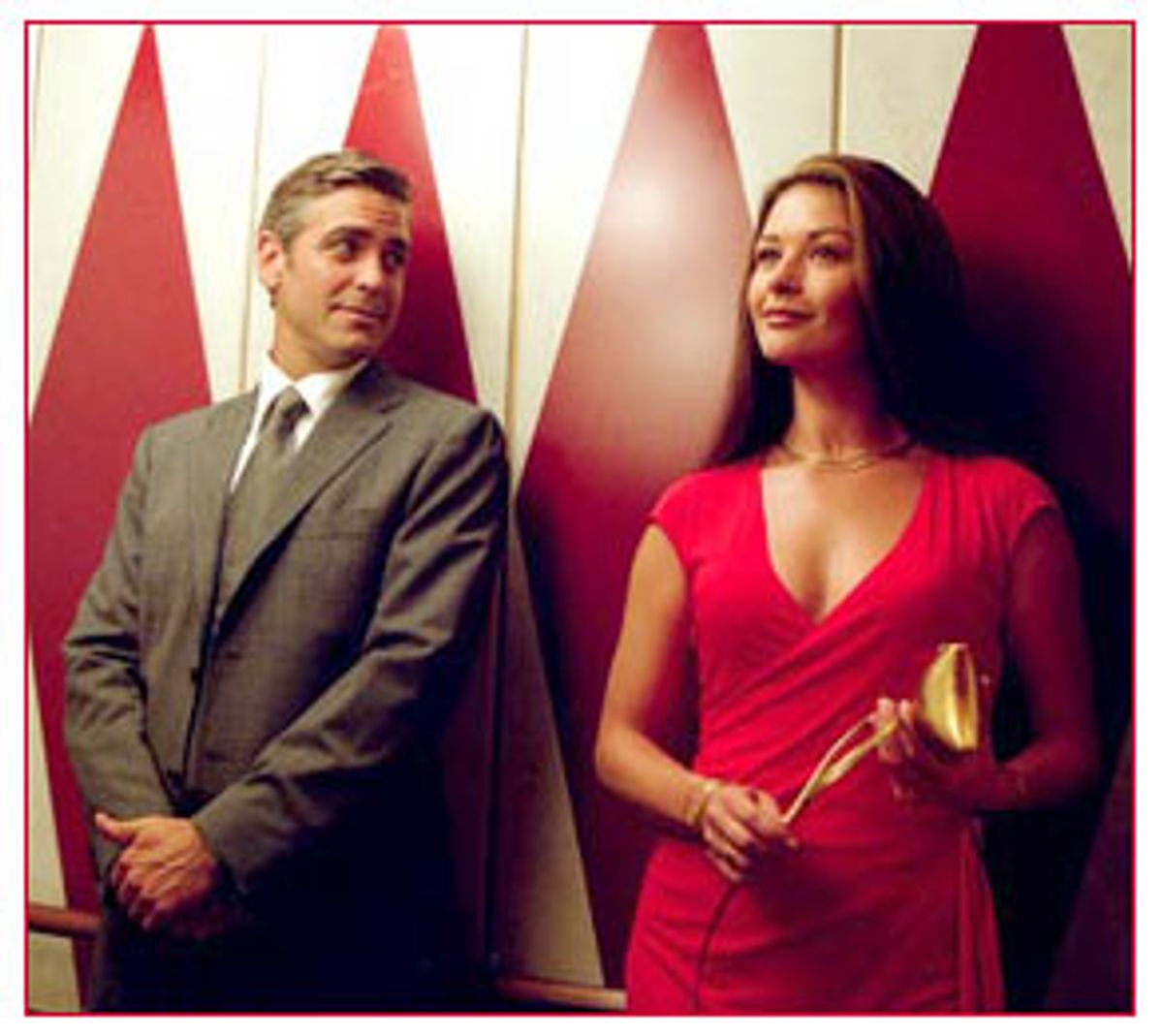 "Intolerable Cruelty" has a solid farce structure, a bunch of ripe second bananas, and two sinfully attractive stars ready to raise comic hell. So why is a movie with so many genuine laughs and so many good bits only fitfully amusing?

The short answer is that the Coen brothers seem to be incapable of trusting their material. In "Intolerable Cruelty" they've begun with a script by Robert Ramsey and Matthew Stone (which the Coens also worked on) that has just about everything you'd want in a farce: a juicy premise, escalating complications, eccentric supporting characters, good lines and a taste for the absurd (there's no reason that a Vegas wedding chapel should have a Scottish theme other than that's just the kind of lunacy you'd expect in screwball comedy).

But they can't resist "tweaking" it, and while their usual cartoonish air is considerably toned down here, even the slight emphases that they bring to shots or sequences can be fatal to comic timing. At times, in "Intolerable Cruelty," they are the equivalent of actors who think that the way to do comedy is to act funny. But in good screwball farce, the lunacy arises from the situations and the characters and the best thing a director can do is to stay out of the way of both. For much of "Intolerable Cruelty," the camera seems to be in the wrong place. Actors are stranded in long shots when the camera needs to be on them to give the comic moments shape and punch, or the camera is positioned low so that they seem to be looming over us.

The Coens' cartoon style worked beautifully in "O Brother, Where Art Thou?" The movie felt like a Mad magazine scrambling of the iconography and popular culture of the Depression. It made sense to turn the Depression into a shared comic tall tale -- so many of the memories that Americans have had handed down by relatives who lived through the Depression do seem like tall tales at this remove. The movie was both a celebration of and a joke about Americans' innate inability to get on with things.

The setting for "Intolerable Cruelty" is contemporary, though the spirit of the film derives from '30s screwball comedies. The movie takes place in Beverly Hills mansions and law offices and restaurants, and in plush Vegas hotel suites. But the Coens and cinematographer Roger Pratt can't simply present the swanky settings for our delectation. They start with wide-angled views of these rooms, as if they were doing a parody of Architectural Digest. The actors often seem to be standing in front of cutouts instead of inhabiting the world on screen.

It's too bad that the timing and emphasis are so off here, because the tone feels right. "Intolerable Cruelty" is a battle-of-the-sexes farce with George Clooney as Miles Massey (a name that seems both drippy and crisp, like a foulard primped to droop perfectly out of a breast pocket), a divorce lawyer for whom winning has become so routine that he's in a state of ineradicable boredom. Catherine Zeta-Jones is Marilyn Rexroth, the gold digger whose eternal enmity he earns after screwing her out of her cheating husband's money. Natch, they fall for each other. But love here has less to do with rapture than with hunger. This is courtship as safari.

"Intolerable Cruelty" is more cynical than bright (a '30s comedy would have swathed the comic daggers in satin), and as a comedy about the boredom of marriage it's nowhere near as consistently witty as Laura Kipnis' recently published polemic "Against Love" (somebody get her to consult on a script). But it's not the repellent cynicism that has characterized some of the Coens' work.

Though the Coens are still far from sympathetic to their characters, "Intolerable Cruelty" seems more motivated by amusement than bile. They enjoy the eccentrics they've put on screen. The gags that fizzle never linger too long because somebody comes along to tickle you -- like the whippet-thin Billy Bob Thornton, who plays an aw-shucks Texas oil billionaire whose blood seems to be made of equal parts honey and barbecue sauce, or Jonathan Hadary as a foofy hotel concierge. I've seen Hadary on stage but never knew he had this amount of craziness in him. He plays the role as if the foreigners whom Erik Rhodes always played in the Astaire-Rogers musicals had been melded with the persnickety petty officials that were the specialty of Franklin Pangborn.

As a private detective who works for Clooney, Cedric the Entertainer gets the broadest and least funny material. He deserves a lot more than holding a video camera on cheating spouses while repeating, "I'm 'onna nail yo' ass!" But Edward Herrmann, as Zeta-Jones' cheating hubby, may possibly be having the most fun of his career. Herrmann has long been called on to be no more than a reliably dull actor of the Hal Holbrook school. The pity of that is that he can be amazing, as he was playing a preacher soliciting the murder of abortion doctors on an episode of "Law & Order," or as he was last year in his improbably touching performance as William Randolph Hearst in "The Cat's Meow." Here, Herrmann uses his big-man's frame to play a blithely horny idiot and the look of surprise he gets on his face is like a kid who earns an A for playing hooky. And Geoffrey Rush makes a great entrance as a hipster producer in a scene that forever finishes off that gassy Simon and Garfunkel "classic" "The Boxer."

George Clooney trusts the Coens a bit too much for his own good. He melds himself into their cartoon style when you wish he had just been left to play it straight and suave. What gets him through is that he's more game for silliness than any leading man around right now. But it's Zeta-Jones who walks away with the movie and who is most resistant to the Coens' shenanigans. The woman has aplomb that is simply flabbergasting.

Zeta-Jones looks as if she were made to make men suffer. When she walks through a room you expect the males to turn into the Big Bad Wolf from the Tex Avery cartoon "Little Hot Riding Hood" and start clocking themselves on the head with mallets. You feel that if you took her temperature at any point, it would read absolute zero. Zeta-Jones never raises her voice or gets steamed up; after a while, she begins to seem like the person involved with "Intolerable Cruelty" who has figured out the style it needs. She knows when to leave well enough alone.