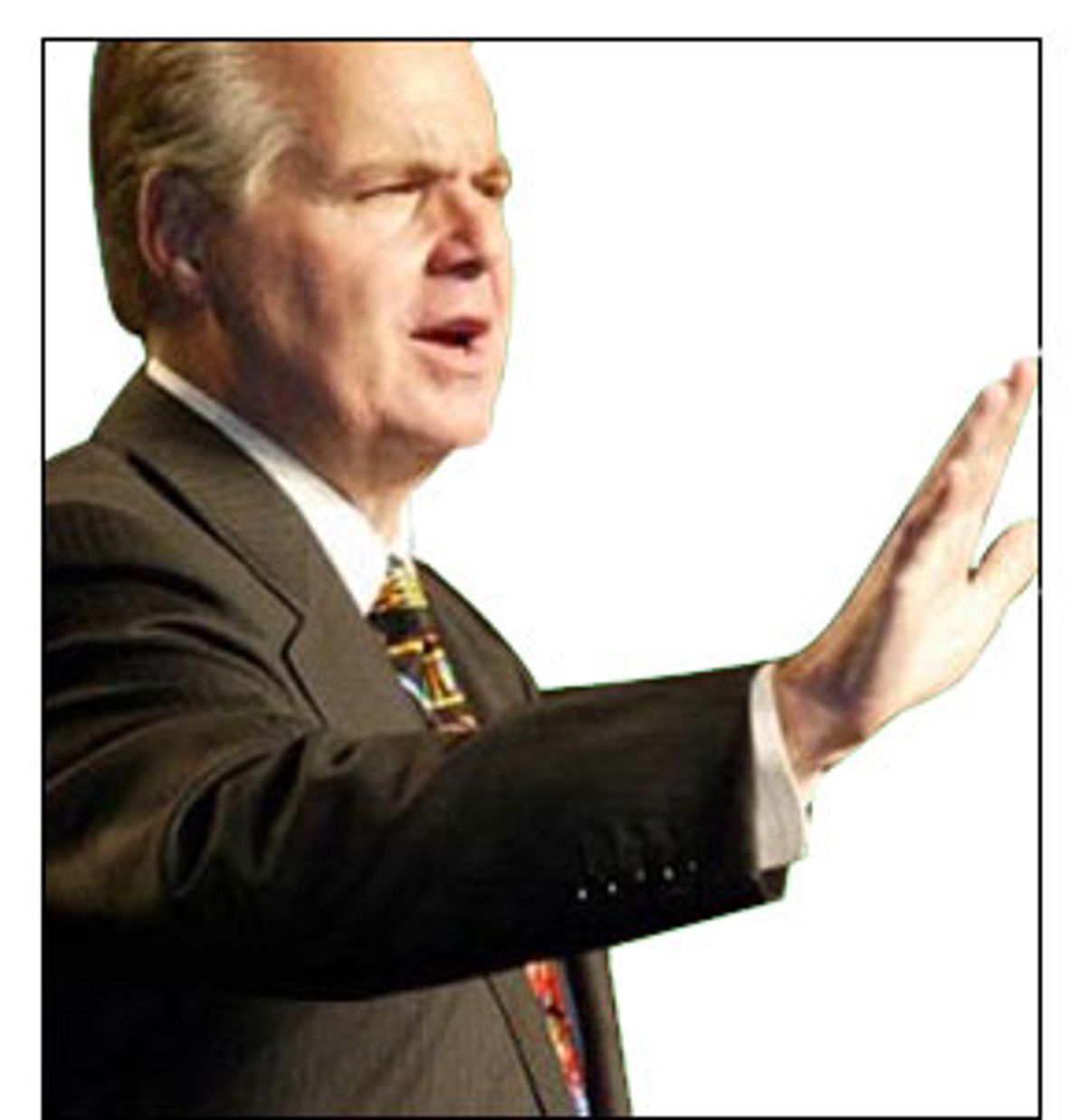 Rush Limbaugh's month from hell started with a foolish comment on ESPN's Sunday NFL Countdown (in this case, about "the media's" obsession with making black quarterbacks succeed). The controversy that followed led him to resign from the sports network. But that was nothing compared to his announcement on Friday.

In a dramatic on-air confession to his fans and critics, Limbaugh said during the last 10 minutes of his radio program that at least some of the media accounts of his drug problems were true. "You know I have always tried to be honest with you and open about my life," he said, the tone of his voice growing somber and reflective but never wavering. "So I need to tell you today that part of what you have heard and read is correct. I am addicted to prescription pain medication." He said he would "immediately" enter rehab for 30 days, asked listeners "for your prayers," and said he looked forward to breaking the chains of addiction. Then, deviating from his script, which was simultaneously sent to news outlets -- he said, "It'll never be over."

Limbaugh spent most of the rest of his show, which runs from noon to 3 p.m. EST on weekdays, as if it was any other day -- claiming that the wealthy carry too much of the tax burden, chastising Howard Dean, and reading an advertisement for the analgesic cream Thera-Gesic. "Nothing's better for pain," he announced. Then, as the show wound down, he began to explain how his addiction to painkillers began. He told his radio audience that he first started taking the medication "some years ago," after undergoing spinal surgery, and "It turned out to be highly addictive."

But what, ultimately, do we know about Limbaugh's situation? He was essentially forced into today's admission after the National Enquirer ran the accusations of Limbaugh's former Palm Beach maid, Wilma Cline, who charged that he had used her to tap into an illegal drug ring to feed his addiction. Several other newspapers then confirmed that the Florida state attorney's office is conducting an investigation into the alleged activity.

He said nothing about his innocence or guilt, stressing only that the stories in the press have contained "inaccuracies and distortions." He said nothing about Cline and her allegations, such as that the drug he was addicted to was OxyContin, hydrocodone and Lorcet. He also said nothing about speculation that his recent, highly publicized hearing loss may have been caused by his addiction. He said he had to wait until the investigation was over to correct the record once and for all.

On the live Webcast of the show, there was something solemn about the occasion -- something surprisingly human. He never looked up once from the statement he read. At the end, he looked weathered, beleaguered. Then he stuck his trademark cigar in his mouth, looked up at the camera one last time, waved for it to be shut off, and winked at the crowd.

So, should we feel sorry for Rush?

It's impossible not to feel for someone forced into such a public, and humiliating, confession. But it's equally impossible not to consider his own record of spouting off against other people with drug problems. Below are some examples [as discovered by, among others, the blogger Atrios] from his now-defunct TV show, transcripts of which are easily attainable -- as opposed to the thousands of hours of his radio show, beamed to millions daily for the past 15 years.

On Sept. 23, 1993: "If there's a line of cocaine here, I have to make the choice to go down and sniff it ... If there were a gun here, it wouldn't fire itself. I've got to reach for it and pull the trigger ... we are rationalizing all this irresponsibility and all the choices people are making and we're blaming not them, but society for it. All these Hollywood celebrities say the reason they're weird and bizarre is because they were abused by their parents. So we're going to pay for that kind of rehab, too, and we shouldn't. It's not our responsibility."

Jan. 15, 1996: "... there were a couple of drug convictions out in -- I think it was a Colorado court. And these guys had -- had done some really bad stuff, and there were mandated federal sentences for the crimes they had committed. And the judge apologized to the criminals while sentencing them because he thought it was too severe. He apologized and the community was outraged. So we've gone from a judge sentencing a mother who makes her child beg six months in jail, to judges apologizing for getting dope dealers and crack dealers and drug salesmen off the streets with too severe a sentence."

Dec. 16, 1994: "So we're not going to get on -- we don't fault these animals for a lack of discipline, but we get on human beings who are fat for lack of discipline and you know it and I know it. But here's the thing that struck me about this. We have alcoholics and drug addicts in our society, don't we? And what do we say about them? Well, they can't help it. Why, it's genetic. Why, they have a disease. Why, put one thimbleful of scotch in front of them and they can die.' We totally exempt them from any control over their lives, do we not? Some athlete will spend two years snorting lines of coke. 'He can't help it.' You know, it's -- it's just -- it's not -- it's -- it's genetic. These people -- they're predisposed to having this addictive syndrome. They -- they can't help -- yeah, like that line of cocaine just happened to march into the hotel, go up to the athlete's room and put itself right there in front of him on his blotter."