An economist for all seasons 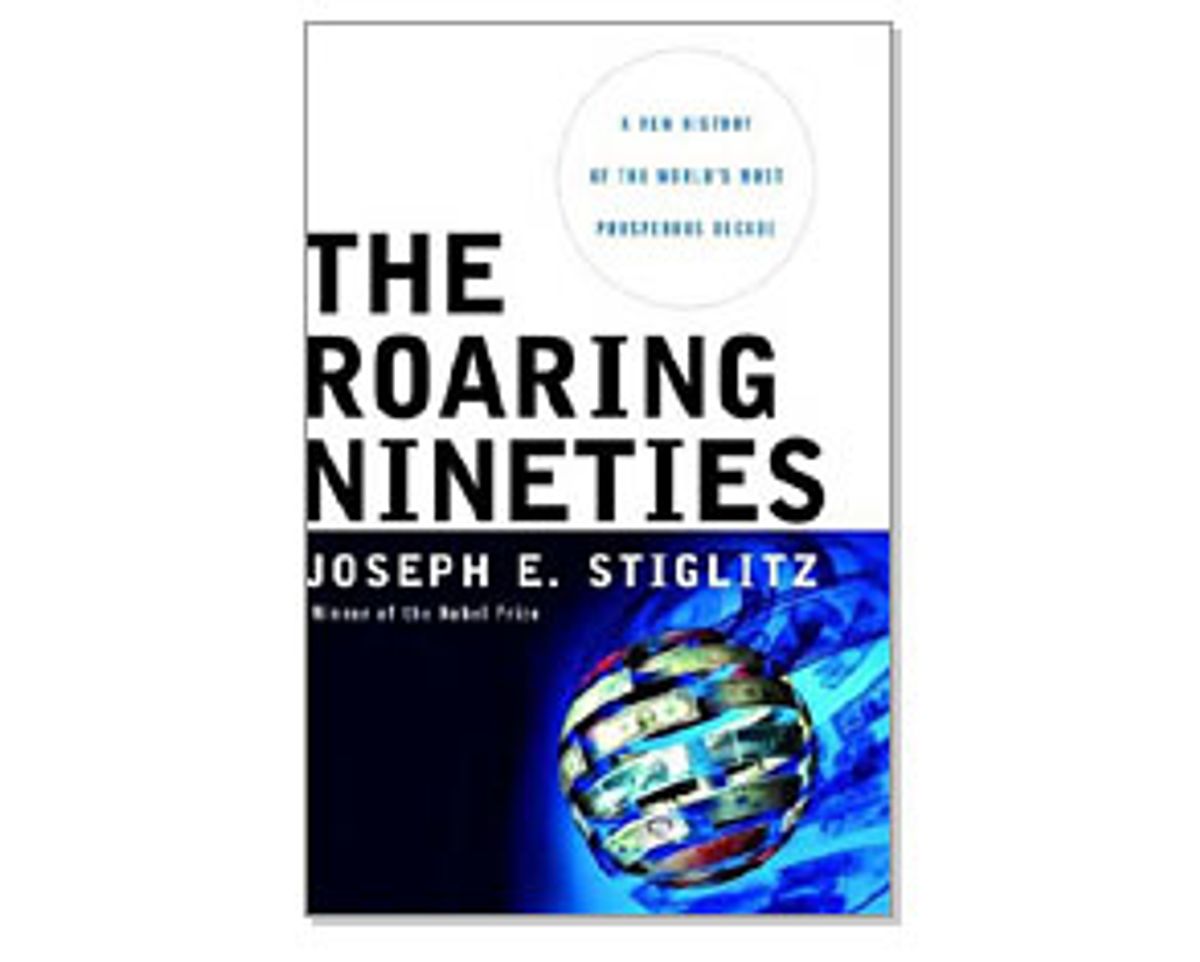 Joe Stiglitz is the economist I want guarding my back if a bloody firefight is about to break out with free-market fundamentalists. When the Grover Norquists and Milton Friedmans and Dick Cheneys come charging over the hill, threatening to smart-bomb on sight anyone who even mentions the words "social justice" or "government regulation," I can count on Stiglitz to lay down a withering blast of covering rhetorical fire that Adam Smith himself would be hard put to counter.

Stiglitz has academic credibility: a Nobel Prize for his work on how "asymmetric information" affects the functioning of financial markets, and faculty positions at Stanford and Princeton. But he's also got the political chops: member and chairman of President Clinton's Council of Economic Advisers from 1993 to 1997 and chief economist of the World Bank from 1997 to 2000. He's no ivory-tower theoretician; he's had years of experience battling opponents, both within the Clinton administration and without.

He does have one major drawback, however: He understands nuance and complexity. This forces him to battle supply-side tax-cut advocates and pro-deregulation demagogues with the equivalent of one hand tied behind his back. Right-wing politicians have done a good job of reducing the rhetoric of economic debate to grunting Neanderthal simplicity. Tax cuts: good! UNHH! Government: bad! GRRR! Stiglitz takes a more sophisticated approach. When the topic is telecommunications deregulation, for example, his position is not that deregulation is bad, per se; he acknowledges that by the early '90s, vast technological changes had made the established regulatory framework obsolete. But that doesn't mean all regulation should be done away with; in some cases, more might be required. The task for government in the 21st century is designing the right kind of regulation, in reforming the system to better serve the general public's interests, and to do that, one needs to be smart.

Alas, it is one of the enduring weaknesses of smart progressives and liberals that nuanced views are both more difficult to articulate than sweeping ideological pronouncements and more challenging to shepherd through the political process. It's just so much easier to simply declare that letting people selfishly pursue their own desires in a completely free marketplace will lead to peace and prosperity for all -- and to claim, on the flip side, that anyone who believes differently is a Stalinist who wants everyone to march in lockstep for the glory of the proletarian revolution.

Well, for those of us unlucky enough not to have Stiglitz in our platoon as we argue for enlightened economic policies that take into account the welfare of the vast majority of the world's human beings -- instead of, say, the tiny fraction that might benefit from the abolition of the estate tax -- we now have his latest book, "The Roaring Nineties," for ammunition. And it will leave you well-armed indeed for any encounter with unruly Chicago Schoolers. "The Roaring Nineties" is a cogent look at the boom and bust of the American economy during the Clinton administration and shortly thereafter, and it covers a great deal of ground. It is neither too academic nor too general; it benefits equally from Stiglitz's clear command of economic theory and political reality.

Much of the story has been told before. Chapters on Enron, on investment banks and accountants and the Federal Reserve, will, in and of themselves, offer little new data to anyone who has studied the individual topics closely. What makes "The Roaring Nineties" useful is how all the pieces are put together in the context of government policymaking, the business cycle, and the process of globalization. And perhaps most valuably, "The Roaring Nineties," despite an epilogue with some strong words castigating George W. Bush's mismanagement of the economy, is far from an anti-conservative diatribe. The bulk of the book's criticism is leveled at the Clinton administration, and particularly the Treasury Department, for pursuing policies that fueled the unstable expansion of a stock-market bubble and set up the economy for a hard fall. (That these policies were too often identical with what Republican politicians had long advocated is, however, a consistent theme.)

The gist of Stiglitz's thesis isn't particularly controversial: While booms and busts are inevitable -- every bubble is going to pop, sooner or later -- policies still matter. Recessions can be shortened, expansions can be lengthened, and vice versa, by political policy choices. In the long term, policies that exacerbate inequitable distributions of wealth are not healthy either domestically or internationally.

Stiglitz's willingness to honestly evaluate the Clinton administration's successes and failures leads to some interesting and somewhat contradictory conclusions. One of Clinton's great successes was balancing the federal budget, a feat that many citizens look back at longingly in these days of half-a-trillion-dollar deficits. Clinton defenders argue that the deficit-reduction policies brought the U.S. economy out of recession and set the stage for the economic boom of the '90s. But Stiglitz notes that such an argument runs in the face of well-established economic theory, which holds that budget deficits are actually the correct prescription for getting out of a recession. He argues that the the economy was already emerging from recession by the time Clinton reached office and that the fixation on the deficit, largely undertaken to please Wall Street bond traders, kept the administration from making the kinds of investments -- in healthcare, basic scientific research, education and other areas -- that would have ensured long-term growth of a more solid nature than what ended up being, in part, mere stock-market speculation.

Such an argument, made at precisely a time when Democrats and left-wing economists are in a frenzy about the Bush administration deficits, leads one to wonder: If running a deficit is the right policy to get a country out of recession, mightn't Bush be doing the right thing now? Not necessarily, says Stiglitz, not when the tax cuts that are in large part responsible for the currently ballooning deficits benefit mainly the extremely wealthy. The poor and the middle class would benefit the most from tax cuts targeted at relieving their burden (and their spending would help the economy the most).

The argument can get convoluted, and at first one might wonder why Stiglitz, an economist who came to Washington at the behest of Clinton, might begin his account with an attack on one of that administration's signal achievements. But ultimately, the approach lends credence to the rest of the book's arguments. This isn't a book by a political hack, attempting to take credit for a decade that saw some astounding economic achievements. This is a sober look at both the successes and the failures of the Clinton administration, an effort to sort out what went wrong and what went right.

What went wrong? The New Democrats of the Clinton administration tried to prove that they could out-Republican the Republicans, by pursuing deregulatory policies that put into effect a set of incentives that encouraged manifold abuses. By failing to crack down on stock-option accounting, by comprehensively deregulating the telecommunications industry, and by being overly deferential to Wall Street at the expense of the general public, the Clinton administration helped created an atmosphere in which corporations and executives were truly free to follow their selfish interests -- at the expense of shareholders, employees and the global economy.

What went right? During the '90s, unemployment hit historic sustained lows, inflation was kept down to a negligible level, and increases in productivity were real. The stock market may have experienced a bubble, but the changes wrought by the Internet and cellphones and the spread of computer technology were substantial. The Clinton administration cannot take credit for every positive datum, but there is evidence to suggest that it was more focused on basic goals that benefited the entire nation, such as increased employment, than its successor has been.

Not surprisingly from the author of "Globalization and Its Discontents," the chapter on globalization is one of the strongest in "The Roaring Nineties," detailing the extraordinary hypocrisy of the United States as it pursued policies abroad that it refused to enact at home. For example, the United States required foreign countries to remove trade barriers blocking the import of advanced financial services -- the kind that U.S. companies specialized in -- while at the same time massive subsidies to domestic industries made it impossible for foreign countries to compete.

Through it all, Stiglitz keeps reminding us not only to ask whether a particular economic policy is efficient or productive, but also to examine what purpose the policy serves. Stiglitz is unafraid to bare his own liberal chest. As he states flatly in a chapter called "Toward a New Democratic Idealism: Vision and Values": "We should be concerned with the plight of the poor. It is a moral obligation."

Stiglitz came to Washington to pursue the goals of social justice, and of at least one thing he is convinced after his years of research and politics: If the proper rules aren't in place, people will seek their own interest in ways that do not necessarily benefit the common good. The litany of disasters that befell the U.S. economy at the end of the '90s and the beginning of the new century is as clear proof of that fact as one could ask for.