Here's a real mystery: How can John Cusack, Gene Hackman and Dustin Hoffman, acting in a John Grisham thriller, be so dull? 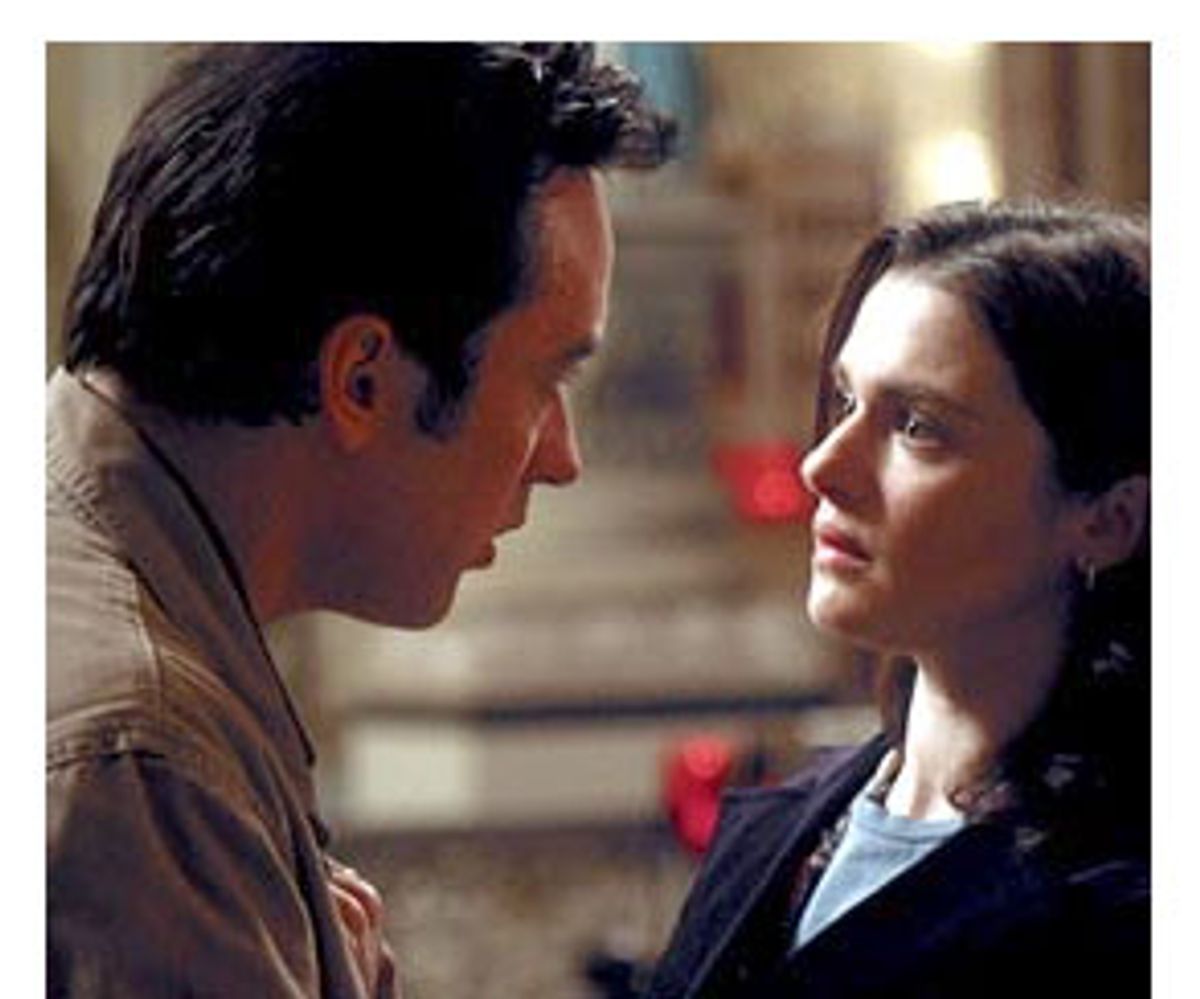 "Runaway Jury" has a great paranoid-populist hook. Playing on our well-founded fears that corporations are so rich they can buy verdicts whenever their nefarious deeds land them in court, and with a plot full of twists and reversals, the material would seem like catnip for a director who wants to make a compelling mainstream thriller.

But director Gary Fleder and screenwriters Brian Koppelman, David Levien, Rick Cleveland and Matthew Chapman are too square to revel in the dirty dealings the movie shows us, even when they work to the benefit of the good guys. What they offer instead is a dose of civic virtue that's as bland as virtue almost always is in the movies.

John Grisham's novel focused on a suit against a tobacco company. That's been changed to a gun manufacturer, to provide an even more potent corporate enemy. A woman whose husband is murdered by a crazed gunman sues the company that made the murder weapon. Afraid that a win will open the floodgates, the gun makers hire a hotshot jury consultant (Gene Hackman) to ensure that their nebbishy lawyer (Bruce Davison) is victorious. Hackman's operation is our worst nightmare of corporate arm-twisting. His henchmen put the potential jurors under surveillance and then eavesdrop on jury selection through a panoply of miniature electronic bugging devices. They even dig up the dirty secrets of certain jurors and threaten them with exposure if they don't side with the defense.

The wild card is Nick Easter (John Cusack), whose bid to get out of jury duty turns out to be a ploy. Nick and his partner and lover Marlee (Rachel Weisz) have conspired to place Nick on the jury so she can sell the verdict to the highest bidder and then have him sway the jury to the paying side.

It's a clever idea, but also a problematic one. For it to work, the filmmakers would have had to subvert everything that we go to a courtroom drama to see -- dramatic testimony, surprise witnesses, gambits by the plaintiff or defense to submit or suppress evidence. The dark joke is that none of those things matter when, one way or another, the verdict is in the bag. And the butt of the joke would have to be Dustin Hoffman as attorney for the plaintiff, believing that good honest lawyering is enough to prevail against gun thugs with bottomless pockets.

Hoffman, though, is not the type of actor to let himself be turned into a joke. We hear the honey he lets creep into his voice when he's sweetening up witnesses to lead them to the kill. But the character he's playing seems just as phony outside the courtroom. It's unsettling how little anything Hoffman does here can be believed. He's gotten to the point in his recent performances where you see nothing but his acting. He's become less a character actor than a character showboater.

One of the reasons to look forward to movies of John Grisham books is that, even though they usually aren't very good (the exceptions are "The Rainmaker" and "The Client"), they often feature lots of good acting. An amazing number of good people turn up in "The Runaway Jury." In addition to the four principals, there are Jeremy Piven, Luis Guzmán, Bruce McGill, Nora Dunn (who comes off best, because she knows how to use her sketch comedy instincts on a role that's no more than caricature), Jennifer Beals and others. But most of them -- including most of the leads -- get nothing to do.

This is the first time Hackman and Hoffman have acted together on-screen, and toward the end of their one scene, Hackman does get to show some of his wiles. But this is one of those rare Gene Hackman performances that's merely competent (the script calls for him to mostly bluster). Cusack is the perfect choice for a con man whom everybody instinctively trusts. There is something hooded about Cusack's open, all-American face, an acidic edge that he's able to inject into his nice guy friendliness. That combination keeps you watching expectantly, but he never gets the chance to deliver on its promise. Like Weisz and Hackman, he's a characterless cog in the grinding of the plot.

Fleder's direction confirms the impression left by his previous films, "Don't Say a Word" and "Kiss the Girls" among them, that he's a hack. My favorite moment of direction in "Runaway Jury" comes when a sequestered jury is led into the courthouse past a bank of movie cameras. That's the level of thought that's gone into this picture. The editing seems designed to prevent any of the actors from building up performance rhythms, and to avoid sustaining a scene so it builds some dramatic impact. You might expect that when Fleder gets the jury into deliberations and the crunch time comes for Cusack to work his con the movie might deliver some "12 Angry Men"-style fireworks. But as with every other scene, it's chopped off.

Plot threads -- like the jurors who are threatened with having their secrets exposed -- are simply abandoned, and it's never clear what Jeremy Piven, as the jury consultant working for the plaintiff's team, does except stand behind Hoffman and look worried. After he makes a major discovery about the dirty dealing the other side is getting up to, he disappears from the movie.

The Grisham novels I've dipped into have a similar weirdness -- they are legal thrillers that seem to have no faith in the law but are still smothered in a kind of Capraesque bathos about our hallowed system of justice. I haven't read "Runaway Jury," but the filmmakers seem to be taking their cues from him. The movie sets up a massive scam to defraud the courts and then winds up telling us that the goodness and common sense of 12 honest people prevail. If the movie had been honest about what it's saying -- that the only way to counteract the money and power of corporations is to rig the game -- it might have appeared as if it were giving in to easy cynicism. But that kind of grift could also have made for a juicy, satisfying take on the corruption of the legal system. There are people -- those who favor gun control as well as those who don't -- who'd find it objectionable for a movie to take pleasure in the spectacle of a gun manufacturer bled white by unscrupulous means, but every party has a pooper. When we go to a thriller we shouldn't have to feel apologetic about watching the worms squirm.