High rollers, high fashion and high teenagers are back with the return of the nighttime soap in "Skin," "Nip/Tuck" and "The OC." But only one proves truly bubblicious. 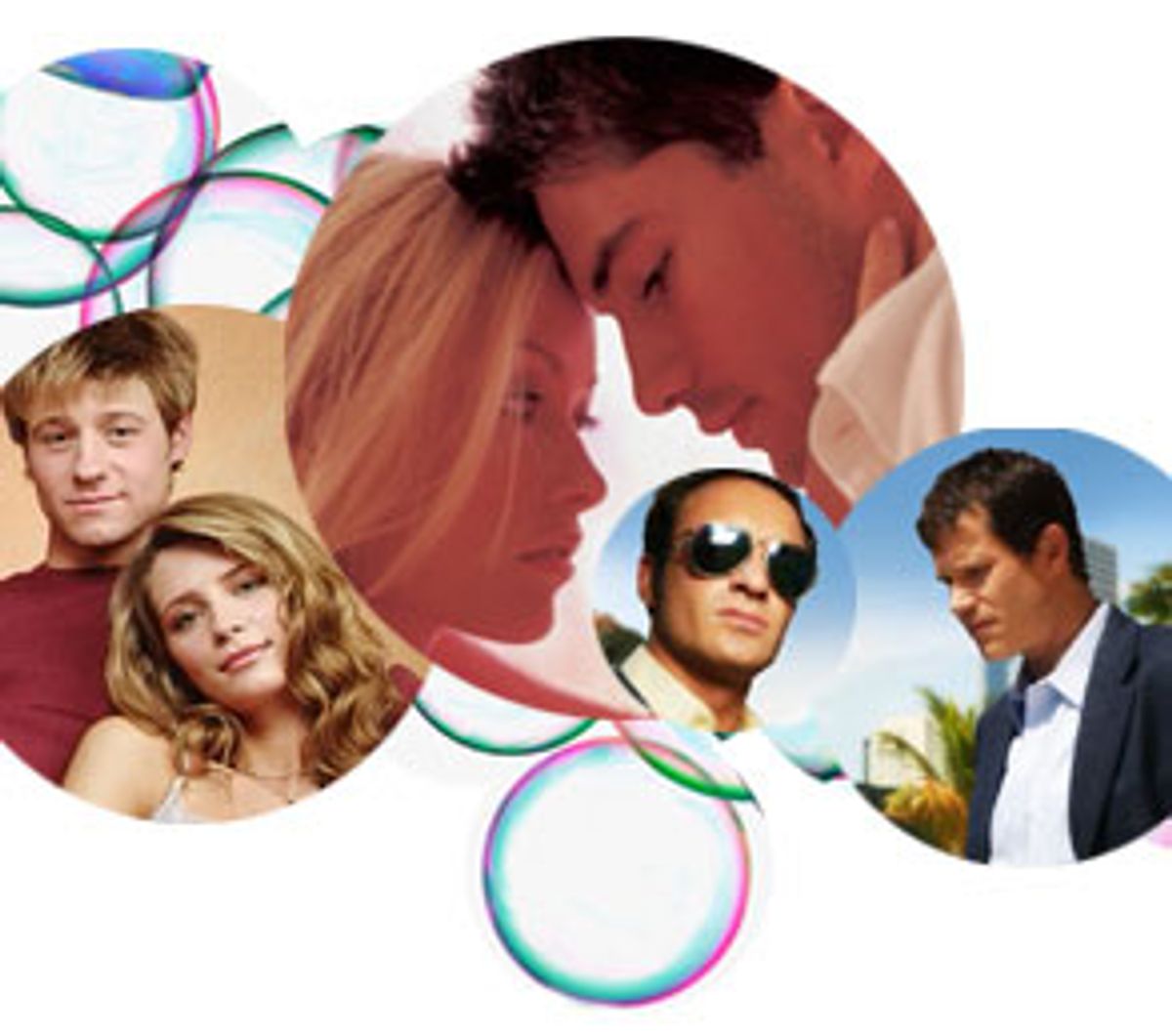 "Get me a warrant for Goldman. Let's bust his rich ass!"

"You tell your son to keep his filthy hands off my daughter!"

Nighttime TV hasn't been this full of vitriolic vim and vigor since Krystle and Alexis took that immortal dive into a swimming pool, Lucy stocked prescription meds in her handbag, and Connie Sellecca paced the gilded lobby of her "Hotel." But will Fox and FX, the first to dive unabashedly into an abyss of sequins and Seagram's, manage to avoid slipping down that soapy slope into melodrama? Can they jack up the stakes without falling prey to goofy conspiracies and long-lost twins? Can their actors give subtle performances when delivering lines like "Sometimes I hate being your daughter!" or "When was the last time we went to bed when you didn't hate me?"

My sources say no. But would we even want them to? The nighttime soap is built like a DeLorean: fast, conspicuous, impractical and notoriously unreliable. We can trust "The OC's" portrait of Orange County about as much as we can rely on "The Jetsons" for an accurate glimpse into the future. Accuracy is sacrificed for campy, glittery fun, and we wouldn't have it any other way. The important question for such shows is similar to that which you'd ask of reality TV: Does it leave us wanting more? For the newest nighttime soaps, the results are decidedly mixed.

Surprisingly, FX's "Nip/Tuck" is perhaps the most melodramatic of the three shows, resembling "Six Feet Under" in its format (only here, the new clients being worked on are alive), but replacing artfully crafted dialogue and subtle shifts in the psychosocial atmosphere with on-the-nose shouting matches and a steady parade of circus freaks. Womanizing Christian (Julian McMahon) and uptight family man Sean (Dylan Walsh) are old friends and plastic surgeons who share an ethically unsound practice that services a debased and deranged clientele, from the obese, gun-toting girl who stopped taking her lithium to the illegal immigrant hotties smuggling heroin across the border in massive breast implants. Our intrepid heroes, meanwhile, are wildly reactive and deeply confused. While Christian is prone to sleeping with everyone from the twins who get surgery so they won't look alike anymore to the clerk at the tanning salon, Sean spends his free time daydreaming about a sexy co-worker, threatening to quit the practice because it's sick and dirty and soul-sucking, and hurling hatefulness at his equally bitter wife, Julia (Joely Richardson), who also happens to have a not-so-unrequited crush on Christian.

Needless to say, the whole mess is more than a little absurd. The lunatics behind "Nip/Tuck" seem so intent on keeping our attention that they throw believability and good taste to the wind without a second thought. Take, for example, the episode where Julia flushes her daughter's hamster down the toilet and the plumber dangles it in front of her and a guest in the dining room, saying, "There'll be no charge! I don't want your money! What kind of a mother are you?!!" You can almost see a similar scene unfolding on "Six Feet Under," but director Alan Ball would handle it with humor and absurdity. The mood on "Nip/Tuck" isn't quite right, though -- less sly and artful, more blunt and crushing, like a kick to the jaw. Thus, when Julia shows Christian her bare breasts under the auspices of getting his advice on whether she needs a boob job ("They're perfect!" he breathes), or when Sean and Julia's son Matt (John Hensley) attempts to circumcise himself, the effect is one part "Whoa!" and two parts "Oh, brother." Even when a little humor is allowed to roam around a scene, it still feels uncomfortable there, like it can't quite find a place to sit.

And in the purely tragic scenes, like when Christian unwittingly takes money from a pedophile who wants surgery so little girls will like him better, everyone tends to lay it on a little thick. McMahon plays Christian with convincing smugness, when it doesn't seem to slip too far into a Kevin Spacey impression. Walsh as Sean is so high-strung and bitter that he's flatly unlikable, and Richardson as Julia seems to turn up the volume a little too high. Every time her husband steps into the room, she seems to either be sobbing or shaking with anger, and the continual high pitch instructs viewers not to take her hysterics too seriously. Still, the acting is able enough, and the scripts are well-written enough on "Nip/Tuck" that, if they turned the volume down and played within the boundaries of reality a little more, the drama would be better served.

Of course, as long as you're being compared with "Six Feet Under" you shouldn't feel too bad. Fox's "Skin," which premieres Monday, Oct. 20, after weeks of heavy promotion, falls more in the realm of cotton candy entertainment -- sugary, fluffy and liable to leave you with a stomach ache. Like a cross between "Dynasty" and Baz Luhrmann's "Romeo & Juliet" both in terms of style and content, the pilot of "Skin" dashes at light speed over a gossamer-thin web of story lines, weaving the content of two suspense thrillers into one hour of flashy television. The story centers on a love affair between a pornographer's daughter and the D.A.'s son, but you probably know that already from one of the clumsy promos, in which mean D.A. daddy bellows, "Can you imagine what will happen if the press gets ahold of this? The D.A.'s son and the pornographer's daughter? It could ruin me!" See how D.A. daddy only cares about his image? That jerk! See how porn daddy is ethnic-looking and thus much warmer and more human despite his naughty, naughty (but fun to ogle) empire? These are snippy cartoon characters spouting hopelessly literal lines that not even the most disciplined performance can save from the "Mr. Toad's Wild Ride" of melodrama.

The style of "Skin's" direction and production is at least distinctive, if excessively hip and a bit shallow. About half of the scenes are more like montages or highlights ("Last week, on 'Dynasty'"!), with the dialogue spliced into a nonlinear collage. The extreme close-ups, glowing, unreal lighting and rapid cuts add to this effect, and with the supernaturally hot models who play Jewel (Olivia Wilde) and Adam (D.J. Cotrona) dominating the screen, the whole thing feels more like a Levi's commercial than an hourlong drama. The few extended conversations that occur are as concise as a telegraph ("I don't give a damn if Goldman's enterprises appear to be legal or not!" "Find the dirt, people. Find a weak link and go after it!" "Honey, his father wants to destroy my business. He wants to ruin our family, do you understand that?" "Why does it matter who my parents are?") The effect is like fast-forwarding through an entire season of "Dallas," pausing only for the parts where Sue Ellen is drunk, Lucy is leering from the chaise lounge, and J.R.'s eyes are dancing wildly around the room, his teeth set against his own obvious culpability.

Still, we are talking about a pilot. And pilots seem to get more and more pilotlike by the year, presumably because network executives expect to offer the promise of every roll in the hay and kick in the capped teeth of the entire season in one hourlong sitting. Emerging bug-eyed and confused from an overly dense pilot isn't a side effect, it's the desired effect.

Unfortunately, "Skin" does such a good job of fulfilling pilot protocol, painting every conflict in such bold colors, that the viewer is left with very little curiosity about the rest of the season. Likewise, "Nip/Tuck" evolves over time, but the kooky surgery seekers are far too bizarre and occupy far too much of the show's dramatic real estate not to make the whole show feel empty and repetitive.

Which brings us to "The OC" (new season debuts Wednesday, Oct. 29, at 9 p.m. on Fox), already a hit after a brief summer debut, and a show that, for all its goofy plots and clichés, somehow leaves us wanting more each week. Part of the strength of "The OC" rests in its characters, which are somewhat unknown to us yet feel fleshed out, and its talented cast. Benjamin McKenzie plays Ryan Atwood, a rough and tumble kid whose delinquent felon of a brother got him into a world of trouble right before his alcoholic, no-account mother abandoned him. Enter pro-bono lawyer and all-around good guy Sandy, played with lovable fallibility by Peter Gallagher, who takes Ryan home to his massive cheesy mansion overlooking the Pacific Ocean. Within days, his pretty wife, Kirsten (Kelly Rowan), and nerdy kid, Seth (Adam Brody), will have their lives turned upside down by this wayward thug, who, like most thugs I know, is adorably scrub-faced, incredibly mature, and sweet as a puppy dog.

Still, the set design is intoxicating, from the glamorous druggie parties populated by pretty boy meatheads and hot babes in bikinis, to the casino fundraisers and charity fashion shows, inevitably shot during magic hour, so that all the rich folks look damn good and utterly empty-headed, throwing back glasses of red wine and whispering about the wanting lineage of the new boy in town.

While the emphasis on class reminds me more of the South than of Southern California, "The OC" offers all of the vicarious thrills of "Dynasty" but with snappier dialogue and sexier Sammy Jo's. Plus, the shows writers seem to have a knack for choosing satisfying story lines. As puppy dog Ryan bounds around his new home, trying not to make a mess on the floor, his brand new geeky brother gains confidence and actually starts getting invited to parties and flirting with his lifelong crush, Summer (Rachel Bilson). Meanwhile, the snotty neighbor lady (Melinda Clarke) gets her comeuppance, Nellie-style, when her husband (Tate Donovan) is investigated for fraud by the SEC. And you can't deny the chemistry between Ryan and the ultrahot girl next door, Marissa (Mischa Barton). Something about the way they look at each other can give you butterflies in your stomach.

The outsider/thug routine looks so hopelessly dorky and overplayed from a distance, yet McKenzie is wisely given few lines, left to capture our curiosity and concern simply by blinking those big peepers when, say, his drunk jerk of a mother leaves him high and dry, or when Kirsten and Sandy decide to take him in permanently. And Brody, Gallagher and Rowan are each so charming and lovable as Ryan's family, with both Brody and Gallagher showing great comedic timing and boyish hangdog looks, they add a warmth to the family's scenes together.

Ultimately, "The OC" isn't a soap at all, it's "Little Orphan Annie." Just as Annie got us through the tough times of the Depression by letting us daydream about being swept away to a mansion by Daddy Warbucks, "The OC" offers an apolitical, sun-dappled landscape where the biggest concerns are kissing your crush, punching your enemy and playing video games. If "Nip/Tuck" and "Skin" are sour grapes for tough economic times, exploring characters constantly forced to balance their ethics against their desire to be richer than God, then "The OC" presents an escapist world where wealth may be shallow and corruptive, but we suspect the wine still tastes better, even when it's thrown in your face.