Watching my marriage end on the big screen

The first time I watched "The Secret Lives of Dentists," based on a novella I wrote about my divorce from the father of my daughters, I laughed all the way through it. The second time I didn't. 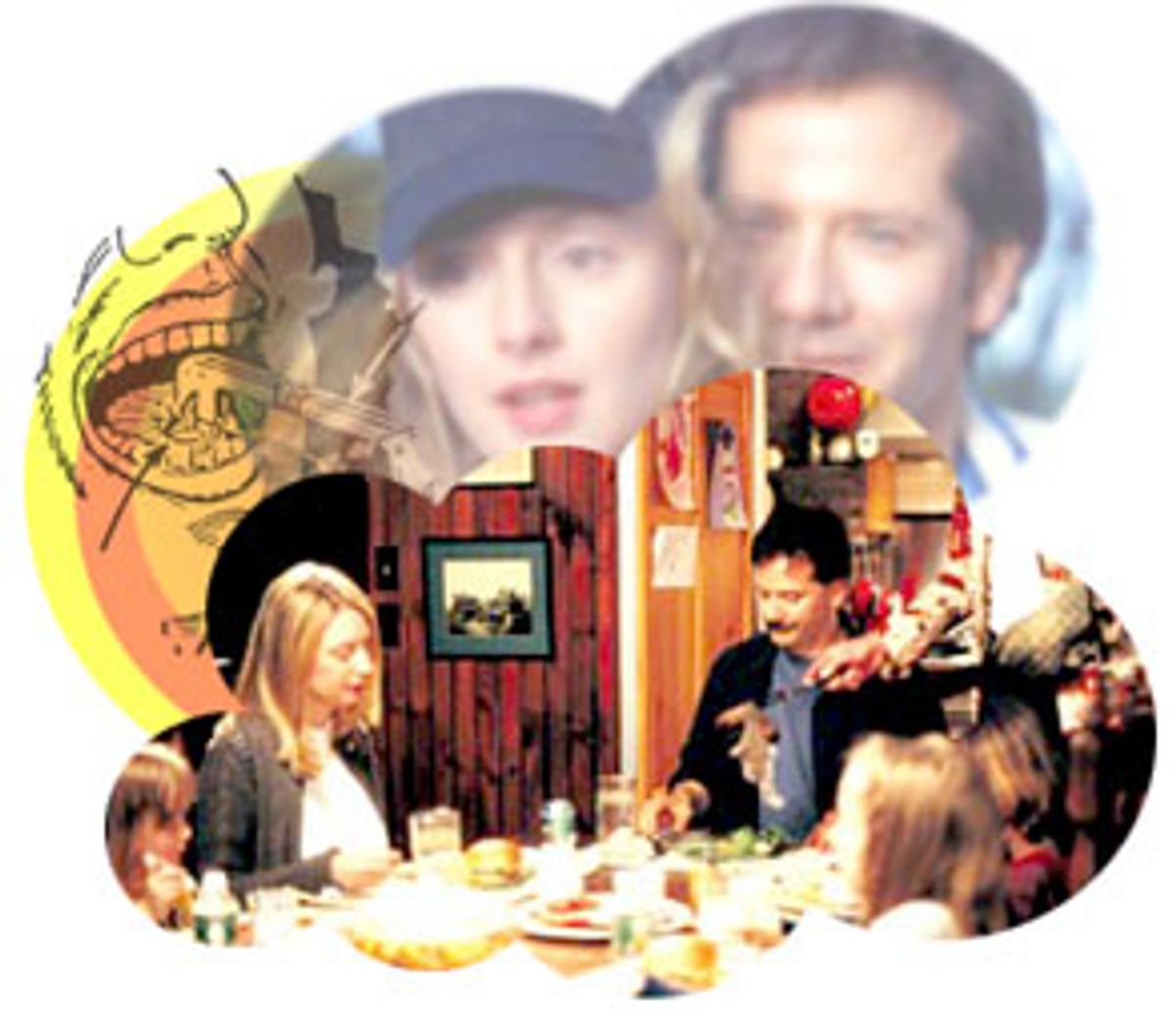 Seventeen years ago, I wrote a novella called "The Age of Grief" about the breakup of my marriage to the father of my daughters, who were then 6-and-a-half and 2-and-a-half. Last night I saw the movie made from the book, "The Secret Lives of Dentists," starring Hope Davis as me, Campbell Scott as my former husband, and several darling little girls as my daughters. Such an experience of déjà vu, Hollywood-style, is a rare privilege, and I've now seen the movie twice. The first time, I laughed from beginning to end, maybe just startled by the uncanny experience of seeing us in different clothes and different bodies, living in a different house, yet speaking words (not all of them but many of them) that I wrote and, indeed, that I spoke. But the rest of the audience was in a good mood that night, as well, and everyone laughed.

Last night, no one laughed. Perhaps, like me, they took it a little more seriously. I thought I was going a second time just to watch my daughter's reaction, and it was true that she saw something of herself in the youngest child -- she opted out of taking her boyfriend to see the movie, remarking that he might realize that her occasionally imperious tone with him has a long history. Campbell Scott and Hope Davis play two dentists, David Hurst and Dana Hurst. The first time I saw the movie, I was all for Dave. The novella and the movie are told from his point of view. He suspects that Dana is seeing another man and that the other man isn't treating her very well. While he is sympathetic, sometimes poignantly so, to the pain she is going through, he doesn't want her to tell him anything and begin what he considers to be the irrevocable process of recrimination, separation, divorce and custody. Frankly, I don't blame him. It is agonizing and tedious. I know -- I've done it twice.

The second time I saw the movie, though, I saw Dana's side of things. Dana is a ball of fire -- the first girl in her dental school class, ambitious, smart, energetic. The Dave she fell in love with was a scary guy -- tall and good-looking, who frequently rode her on the handlebars of his bicycle down a long, dangerous hill (this couple in real life were not myself and my former husband, but two law students I knew).

The Dave she is married to has gotten lost in a sea of little girls -- serving, accommodating, taking care. And he is methodical, the way you would have to be to be a dentist. He is responsible and long-suffering. And he is afraid. That's what jumps out at me about the movie and my life 20 years ago -- I was afraid; my husband was afraid. We were afraid separately and we were afraid together, and we didn't have any method for easing our fears or even sharing them. Our lives seemed fragile in every way -- financially, physically, emotionally, geopolitically (remember the evil empire?). We had no faith, even that another day would dawn, and so we were easily startled, easily panicked. In my real marriage, I did several things that I now laugh at. Once I woke up, heard a high wind, became convinced it was a tornado, and crawled with my baby under my arm to the basement. My husband, who wasn't normally afraid of tornadoes, was so infected by my panic that he crept after me with a flashlight. As we were crawling through the dining room, we noticed outside the windows a brilliant moon in a partly cloudy sky -- no tornado in sight. We stood up sheepishly and went back to bed. Some of the fear was inherent in having small children, in protecting them and trying to do a good job rearing them, but much of it was extra, an effect of loneliness.

Because that's what I learned from watching Mr. Scott play the strange amalgam of himself, the character in the script, and the character in the book, which was my husband as myself and also as a dentist -- David Hurst is a terribly lonely man, who stares in longing at a woman in the same room and bed with himself as if she were across a deep ravine and unreachable even when she is reaching out to him. No wonder he is sad (and Mr. Scott excels at depicting Dave's sadness, especially in the last scene, when Dana returns, admits she has been having an affair, and says she wants to stay). He's also clumsy. Every time he reaches for his wife, he does it awkwardly, as if he is desperate, but has no idea how to reach her or please her -- no idea, in fact, of who she is and what she likes. And so Dana is lonely, too, but also perplexed. If he loves her, as he keeps saying he does, why won't he talk to her? Why has he, I would bet, never talked to her? How can he be so kind and careful and attentive, and yet so distant?

I didn't know then, but I do know now.

I used to think that longing was the marker of true love. If you were breathless with longing, what a relief! That meant you still loved him and you could get on with the big project, whatever it was -- the courtship, the wedding, the pregnancy, the raising of small children. If you could just look across the room and feel that scoured-out, aching feeling that would at some point be consummated with thrilling sex (if A, then B, according to the conventional logic), then he was the one. Then, when I was almost 50, I happened to be holding my partner in my arms and chatting with him and longing for him like a house afire and I thought, how ridiculous is this? Now I think that the markers of true love are trust, kindness, perceptiveness, care and respect. Dave and Dana Hurst, the truest doppelgängers I will ever have, don't know anything about any of those qualities. For them are substituted anxiety, placation, ignorance, divvied-up duties and fear. I don't think their condition is hopeless, but I do think that when Dana gets home that last morning, horrified, chagrined and maybe a little defensive, and Dave discovers he is somehow even sadder and lonelier than he was an hour before, they might pause and try something new.

It would be Dana who starts. She would start by recognizing that most American men, however tall, strong, methodical and daring they are, are raised to be afraid -- of punishment, of failure, of sharing, of seeming weak. Manliness is a vexed enterprise in American families and a constant source of worry to most men with any intelligence. And so she would draw him out. She would use kindness and wit, care and comfort. She would seduce him -- not into sleeping with her, but into relaxing, into feeling at ease with her. Maybe it would take courage on her part to open him up. When I was in that marriage, I was terribly afraid of my husband's anger. Lots of high-achieving women are former good girls who have learned not to make a wrong move, not to let anything get out of hand.

After a while, Dave, too, would have to be brave. He would have to be brave enough to give up his own longing and whatever that means to him about sexuality and desire. He would have to accept that he had won the prize girl, but that living with, working with, and relating to the prize girl require different techniques from those needed to win her. He would have to observe her, learn about her, be willing to understand what she does want rather than what she should want. He would have to drop his natural reserve and talk to her. Mostly, both of them would have to find some faith -- not necessarily that nothing bad is going to happen, but that whatever it is, they can handle it. To find faith, they don't necessarily need religion, though that might help; they only need to look outside themselves, outside the house, and realize that most people take care of most business well enough.

I know some people who've benefited from divorce. They've learned lessons they never would have learned otherwise about letting go of fear and selfishness, not to mention impatience and anger. I know several people who found their true mates after a few tries, but I know others who try and try to no avail, running headfirst into their own bad habits over and over, no matter who the partner is. Thus, I don't recommend that Dave and Dana divorce. I actually think that Dana might thrive, but Dave would not. And those girls! Well, who can say, except that even though they are as darling as can be, what stepparents are really going to be able to stand them?

As for me, I am not married anymore. My partner concluded from his two marriages that he's not the marrying kind, and I concluded that he was old enough to make up his own mind. We live in separate houses, which seems to be the case with other couples I know. Fortunately, the pundits of marriage aren't concerned with couples like us; marriage-wise, we are a lost cause. But we do exercise trust, kindness, perceptiveness, care and respect; we make love once or twice a day; and we don't worry about the state of marriage in America, ever.

We want to make you a part of this series. What is the state of your union? Did you find the one and never look back, or has finding lasting love been a marathon of trial and error? Did you have a fairy-tale wedding only to watch things crumble once the reception was over, or have you glided along in marital bliss since Day One? We want to hear your stories of joy, romance, heartbreak and pain. After all, partnership, as we all know, is a complex concoction of all of those things. (Please remember: Any writing submitted becomes the property of Salon if we publish it. We reserve the right to edit submissions and cannot reply to every writer. Interested contributors should send their stories to marriage@salon.com.)

Jane Smiley's new book, "Thirteen Ways of Looking at the Novel," will be out in mid-September.