Diesel-powered boats are big-time polluters, pumping out more noxious fumes per passenger than cars or buses. Is it time to clear the decks for fuel-cell-powered watercraft? 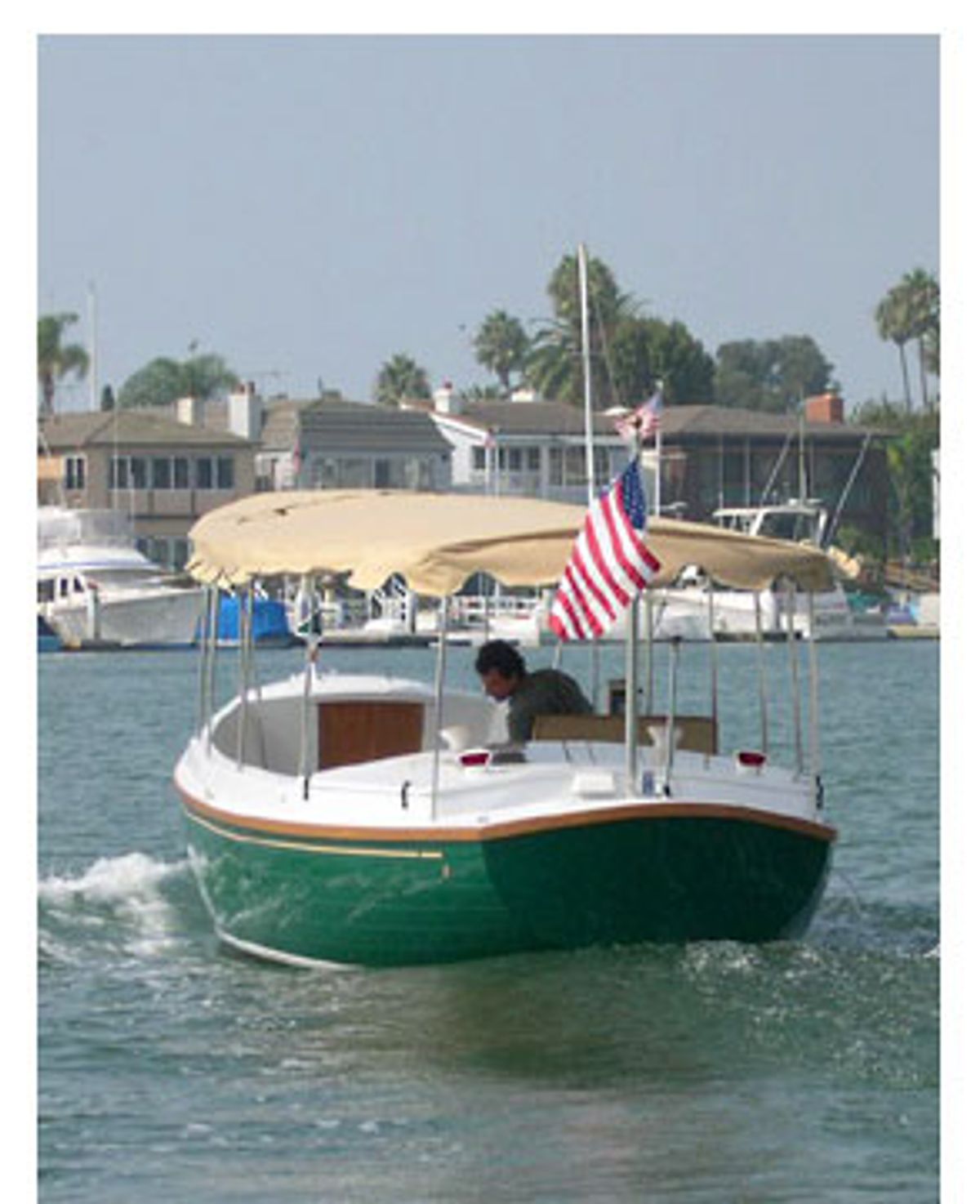 It's hard not to feel a little eco-smug as the first hydrogen fuel cell boat on the San Francisco Bay slides away from the dock at Pier 40's South Beach Yacht Club, leaving behind a marina full of giant yachts and sailboats that burn dirty diesel and gasoline in their engines.

There's a loud grind from the bow thruster as the 30-foot green fiberglass water taxi makes a left turn, but once the boat is on course, the engine generates little noise at all and the craft barely vibrates. "I've never been on a boat this quiet!" exclaims one passenger.

The boat, designed by Seaworthy Systems, produces no emissions, since it has no internal-combustion engine. It is powered by both a fuel cell and a battery, which is called upon during acceleration for extra oomph.

"When you're out there on the water, the energy is really coming from the fuel cell," explains Rex Hodge, president and CEO of Anuvu, the cell's manufacturer. As with a hybrid car, where the internal combustion engine charges the electric battery, the boat never has to be plugged in to recharge the battery, because the fuel cell does the job.

Turning away from the Bay Bridge, the craft makes a sharp right turn following the cement breakwater that separates the harbor from the bay. The wall is lined with seagulls, cormorants and a few brown pelicans, which appear to take no notice of the quiet boat or its human cargo. The vessel then circles around toward Pac Bell Park through the same waters where pods of kayakers and motorboaters try to catch home runs during Giants games.

But all too soon, our ride is over. "I was told my last trip was too long," apologizes Capt. Sweeney, an engineer for Seaworthy Systems. After all, it's just a demonstration, and besides, the sodium borohydride fuel that juices this baby costs $48 a gallon.

Hydrogen has been touted increasingly over the past year as the long-term solution to everything from global warming caused by greenhouse gas emissions to the United States' overdependence on foreign oil. Until recently the province of a few futurists and environmentalists, hydrogen has even moved into the parlance of Republican policymakers. In January, President Bush talked up hydrogen as part of his "Freedom Fuel" initiative. Earlier this fall, now Governor-elect Schwarzenegger proposed a "hydrogen highway" for California to be ready to roll by 2010. Pumps would deliver fuel every 20 miles to a new generation of zero-emission vehicles -- a proposal that drew scoffs from those who wondered where the Hummer-driving actor would find the money to pay for a bold new infrastructure in the midst of a horrific budget crisis. Meanwhile, hybrid cars like the Toyota Prius are being snapped up by buyers as fast as they are made available.

And yet, like so many grand futuristic technological solutions to today's problems, the hydrogen economy has a way of receding into the middle distance the more you look at it, always appearing years, if not decades, away. There is the problem of the infrastructure, the problem of the fuel cell's price, the problem of where you get the hydrogen, and so on. It's not even clear that refitting boats with fuel cells is the best decision, right now, for cleaning up marine pollution. There are cheaper alternatives.

But hydrogen momentum does appear to be building, pushed by a rising tide both on land and sea. In October, Anuvu started quietly offering a fuel cell vehicle to the public -- a pickup truck with a hybrid fuel cell and battery engine -- that retails for $100,000. So far, nobody's bought one.

Despite all the hype and media coverage of fuel cell cars, it may be in fact be on water where the general public is likely to get -- and afford -- its first access to the transportation technology. San Francisco plans to have a fuel cell ferry on the bay by 2005, running from Treasure Island to the city and back, says Mary Frances Culnane, marine engineering manager for the city's Water Transit Authority. The project is funded by a $2.5 million federal grant from Congress to try out the technology in a working marine vessel.

Our boat's $48-a-gallon fuel interacts with a catalyst that separates it into sodium borate and hydrogen. The fuel cell breaks down the hydrogen to generate electricity to power the engine. The nontoxic sodium borate byproduct will be decanted off the boat when it's back dockside.

However, as yet "there is no distribution or infrastructure" for this expensive fuel, stresses Craig Newhouse, sales director for Anuvu, noting the price per gallon would have to come way down for effective commercial use. But he's confident that will happen eventually.

The boat we've ventured out on today is a demonstration recreational vehicle, not commercially available, which seats 18 for lazy cruising at a maximum rate of 8.5 miles per hour. The project is funded by the Center for the Commercial Deployment of Transportation Technologies at California State University at Long Beach. The center, in turn, gets most of its funding from the Department of Defense, says Hodge.

"Every one of the boats out here pollutes like crazy, and in a few years they won't have to," says Newhouse at the South Beach Yacht Club, where more than a hundred sailboats and yachts float in their berths.

Until recently, notes Terri Shore of the Bluewater Network, a nonprofit that advocates for cleaner boats and ships, marine vessels have been exempt from the kinds of regulations that have made some headway at cleaning up cars and trucks.

"On a per passenger basis," says Shore, "ferries are far more polluting than other landside transit. They're way dirtier per passenger. That's because cars and buses have become 97 percent cleaner in the past three decades. And marine engines are uncontrolled."

That's about to change. Between 2004 and 2007, federal emissions regulations for marine vessels will gradually go into effect. In San Francisco, the Water Transit Authority has pledged to operate its new ferries at a standard 85 percent cleaner than the regulations set by the Environmental Protection Agency for 2007. "By setting that stringent emissions standard, they'll be more comparable to cars and buses, so you won't have a huge increase in air emissions if someone switches from their car or a bus or BART to a ferry," says Shore.

Today, shipping accounts for about 2 to 3 percent of CO2 emissions worldwide, according to James J. Corbett of the Graduate College of Marine Studies at the University of Delaware. But the feds won't be imposing any of their new requirements on most container ships -- some of the biggest polluters in any large port -- since most of them fly under foreign flags. And even the new standards that have been set won't clean up many of the diesel-powered ships already at sea.

"Diesel engines last for decades," explains Diane Bailey, a scientist for the Natural Resources Defense Council, an environmental advocacy group. "The new standard only deals with new purchases, and the emissions [on older boats] are only getting worse as the engines degrade over time. So, the new standards do nothing to mitigate the pollution coming from emissions."

While it will likely take more government regulation to really have a significant impact on marine vessel emissions, environmentally conscious boaters are asking: Why wait for hydrogen fuel cells to arrive, when you can use biodiesel right now on your existing diesel engine?

Biodiesel, in its purest form -- B100 -- has been implemented with existing diesel engines at harbors in Ventura, Calif.; Elliott Bay in Seattle; West Bay Marina in Olympia, Wash.; and Channel Islands National Park off the coast of Southern California.

San Francisco plans to implement a ferry fueled with biodiesel, along with its hydrogen fuel cell boat. But it's not a perfect solution.

"We ran a test with biodiesel, but it was not as good as we expected," says Heidi Machen, a spokesperson for the Water Transit Authority. "The nitrogen oxide emissions slightly increased, while other emissions decreased." The biodiesel ferry and the fuel cell ferry will be just two of 31 new ferries on seven new routes that San Francisco will put on the water over the next few years.

Seaworthy Systems' Sweeney thinks that wealthy boaters looking for a novel, tech-savvy way to impress their friends may also help nudge fuel cells along. "The wealthy people are probably going to push this technology, just like they did the horseless carriage at the turn of the century," he says.

He points out that Duffy Electric Boats in Newport Beach, which makes the water taxi that the fuel cell party boat was adapted from, has sold hundreds of the purely electric models of the boat, designed to plug in at the dock after an afternoon's pleasure cruise. The buyers treat the boat as a "second boat" to show off in addition to their yacht or sailboat.

Designing alternative fuel technologies into boats has two advantages over cars: the space constrictions on a boat aren't as tight, which is handy when you're designing a new power source. And unlike cars, boats usually return to the harbor that they launched from, making the fuel-infrastructure issue somewhat easier to solve.

But the real battle over controlling greenhouse gas emissions, improving air quality, and decreasing the United States' dependence on foreign oil will ultimately still take place on the road, not on water, since cars and trucks make up a much greater percentage of overall emissions.

The market for electric cars foundered when Detroit concluded that consumers would not spring for a technology with a limited range, despite the protests of passionate early adopters who loved the technology. But a variation on the electric car, which doesn't have to be plugged in -- the hybrid electric-gas model -- has achieved some commercial traction. Japanese automakers Toyota and Honda are leading the way. Since 2000, Toyota has sold some 50,000 of its Toyota Prius hybrid, and recently announced that it will offer a hybrid internal-combustion/electric engine as an routine option on most of its models by 2010, thus providing consumers that need a bigger vehicle, such as a minivan or an SUV, with a more fuel-efficient alternative to the gas guzzlers of today.