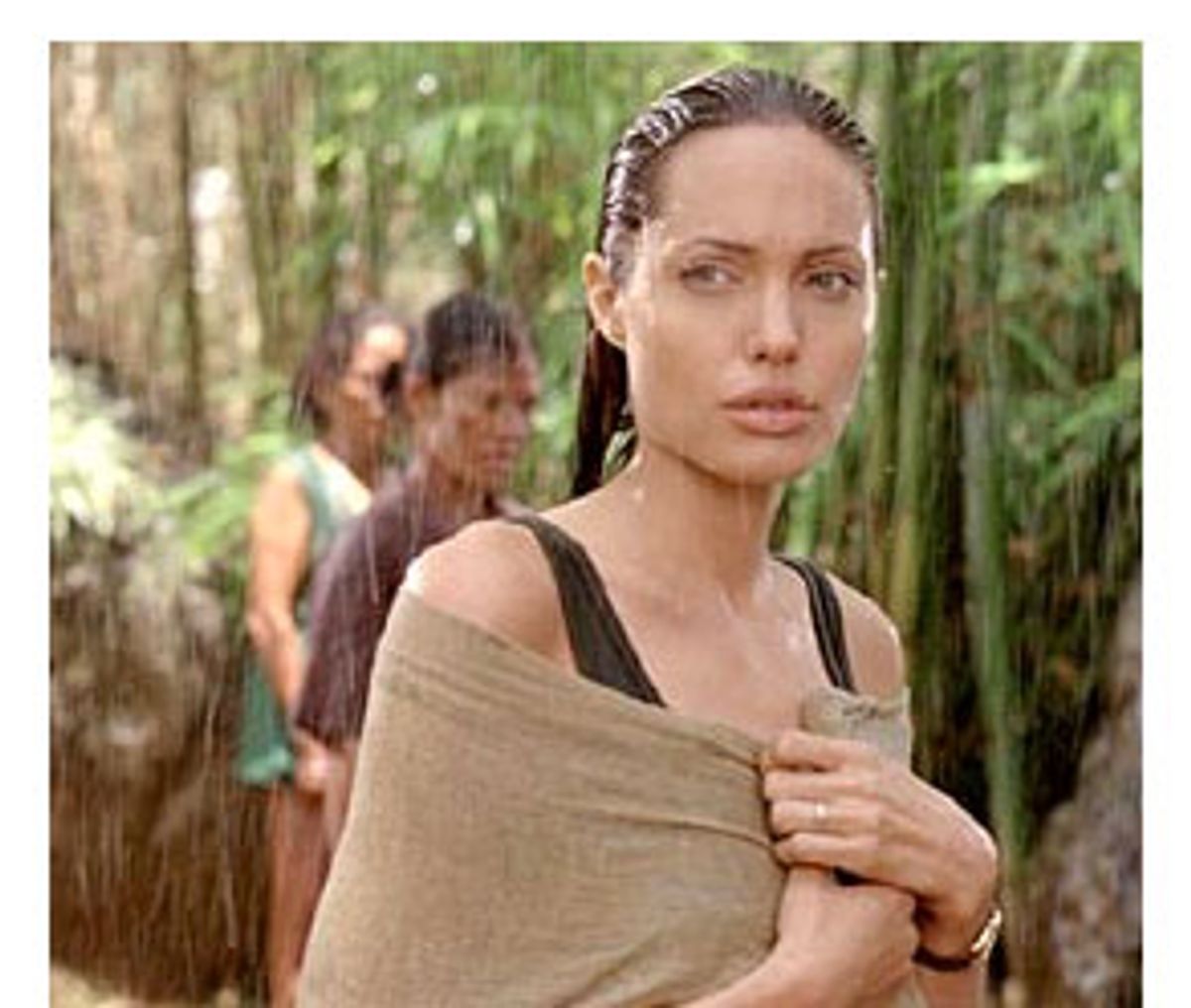 You could argue that "Beyond Borders," a love story set against the war-ravaged landscapes of Ethiopia, Cambodia and Chechnya, is a complex and compassionate picture simply because it acknowledges the suffering of human beings (particularly children) in those areas. That, I suppose, is evidence that director Martin Campbell and his screenwriter, Caspian Tredwell-Owen, are willing to face up to unpleasant moral issues that Hollywood largely ignores.

But while we all like to applaud good intentions, we also have to ask ourselves if it's really OK to make the suffering of children an interstitial dramatic element in a romance that's essentially melodramatic poot. When Angelina Jolie, as a rich, sheltered society wife turned humanitarian aid worker, cradles a starving child in her arms -- this section of the movie is set in Ethiopia, circa 1985 -- it's clear that it's the child we're supposed to feel most strongly for. But a scene or two later, Jolie is gazing with swimmy adoration at a handsome, rugged renegade doctor, played by Clive Owen, who runs a camp for refugees, treating as many as of the sick and starving as he can manage on his meager means.

Brought together by their concern for the suffering and the dying, worldwide, the two tumble into a mad, passionate yet principled affair that takes place over a period of years (the movie spans from the mid-'80s to the mid-'90s) and brings Jolie to various troubled hot spots (she has a smashing outfit for each one). In between, she goes home to London, where she lives with her husband, Linus Roache (who's saddled with the impossible job of playing the stereotype of the well-meaning but passionless English husband, as opposed to an actual human being), and her young family, who are all very nice but not particularly exciting.

"Beyond Borders" is such a naively old-fashioned picture that at times I could barely believe what I was seeing and hearing: Jolie, running across the sands of Ethiopia in a flowing white linen outfit, at one point tripping on her stylish espadrilles; Owen, with stoic, heroic grandeur, uttering lines like "I'm no warrior. I'm in the relief business"; or Owen's longtime partner in that relief business, played by Noah Emmerich, describing the reality of civil-war-ravaged Cambodia, circa 1989, to Jolie: "There are land mines, lots of them. So we have lots of amputees without prosthetics. It's not a happy place."

I shouldn't think so. "Beyond Borders" has a TV Movie of the Week righteousness about it -- you can feel the way the filmmakers and the director are struggling to educate us, even as they must surely know, deep in their hearts, that the florid, doomed romance is the real focus of the movie. When Jolie travels to Chechnya (this would be 1995) in search of the good doctor, she arrives on the scene wearing a striking fur hat straight out of "Doctor Zhivago." She presses the locals, feverishly, for info: "I'm looking for Nick Callahan, the English doctor" -- not to be confused with the English patient, in case anyone out there has their allegedly morally complex historical romances mixed up.

I think Jolie is an incredibly gifted actress, but her choices here baffle me: We get lots of close-up shots in which her giant eyes gleam dewily and her pillowy bottom lip quivers gently, a multipurpose expression that represents everything from unwavering determination to suppressed passion. Owen comes off better, spinning out the most unbelievable lines of dialogue with such old-time movie-star conviction that you buy them in spite of yourself. Unlike nearly everybody else in the cast, he seems to know exactly what kind of movie he's found himself in, and he tailors his performance accordingly.

I could write "Beyond Borders" off as mere well-intentioned silliness, if it weren't for the way it shows us -- and uses, for dramatic effect -- those suffering children. When Jolie comes across that starving child in the desert (he's so weakened that a buzzard has already begun to circle him), cinematographer Phil Meheux shows us a startling sight: a child who is so malnourished that he no longer looks like a child -- he has the face of an old man. His body (more bone than skin) twists awkwardly as he gazes up at Jolie. (The movie's production notes explain that a healthy child was used in the scene; he was made to look emaciated by means of computer graphics.)

The sight of this child is designed to shock us, and it does. But once I registered what was happening, I realized this wasn't an image, but a shot. In other words, there are times when an on-screen image stops you cold, making you forget you're watching a movie. And there are others when it's all too apparent that someone is working very hard to make sure we grasp the gravity and meaning of what we're seeing on-screen. When you notice that a starving child is part of a composition, it's a jolting reminder that even the most potent visions of suffering can be reduced to an element of movie craftsmanship.

Worse yet, in one of the Cambodian scenes, a Khmer Rouge soldier strides into the hut in which the doctor is treating patients and announces that, because he believes they're spies (among other reasons), one of the members of the relief party has to die. He then plucks a crying baby from his mother's arms and plunks the child on the floor, giving him a live hand grenade to play with.

The baby continues to cry as he fiddles with the grenade, plucking at the pin; the audience hangs in the balance as the minutes pass. The point isn't that the setup is unrealistic -- on the contrary, it's extremely realistic, based on what we know of the atrocities committed by the Khmer Rouge. (In other words, please stop now if you're ready to dash off an angry letter accusing me of giving a "bad review" to the suffering children of the world, as opposed to assessing the way their plight is depicted in a movie.)

The bigger issue is this: Even if a filmmaker believes he's doing a valiant thing by heightening a movie audience's awareness of a real-life atrocity, is it morally excusable to use the depiction of a screaming child (again, an element borrowed from all-too-real life) as a device to build suspense in your movie? Because that's exactly what Campbell is doing. The scene is calculated to put us on edge, and it does. What's going to happen next? Who will save the day? Who will die? How will this event affect the course of true love between Jolie and her doctor?

Campbell is in very tricky territory here, and although he clearly doesn't intend to exploit real-life tragedy, that's exactly what he ends up doing. "Beyond Borders" was shot in various locations around the world, including North Africa; reportedly, when the filmmakers were done shooting in the area, they left behind tents, office furniture and generators that the local inhabitants and relief workers could put to good use, and the location filming also helped fortify the area financially. What's more, Jolie herself is a goodwill ambassador for the U.N. High Commissioner for Refugees, which suggests why she'd be attracted to a project like "Beyond Borders" in the first place.

But "Beyond Borders" isn't a documentary; it's a melodrama with pretensions to humanitarian generosity. That's not to say it's impossible to make movies that use drama to connect us with real-life humanitarian issues -- Michael Winterbottom's "Welcome to Sarajevo" springs immediately to mind. But these are tricky movies to make, and even the best-intentioned filmmaker can stumble while trying to weave a message into the narrative.

The reality of Hollywood, of course, is that movies are designed to make money above all else. If a filmmaker attempts, even in a misguided way, to extend the scope of our geopolitical awareness within the framework of a standard Hollywood picture, you're tempted to give him extra points for at least making the effort. But there's still something distasteful about the way "Beyond Borders" attempts to use the horrors of recent history to lend seriousness to your standard pack-'em-in romantic weeper. Angelina Jolie and Clive Owen make a handsome enough couple on their own. They don't need to use the suffering children of the world as accessories.