His body (of work) is a wonderland

Sure, critics make fun of him. But sensitive-guy singer-songwriter John Mayer has put the soul back in folk and the sex back in vanilla. 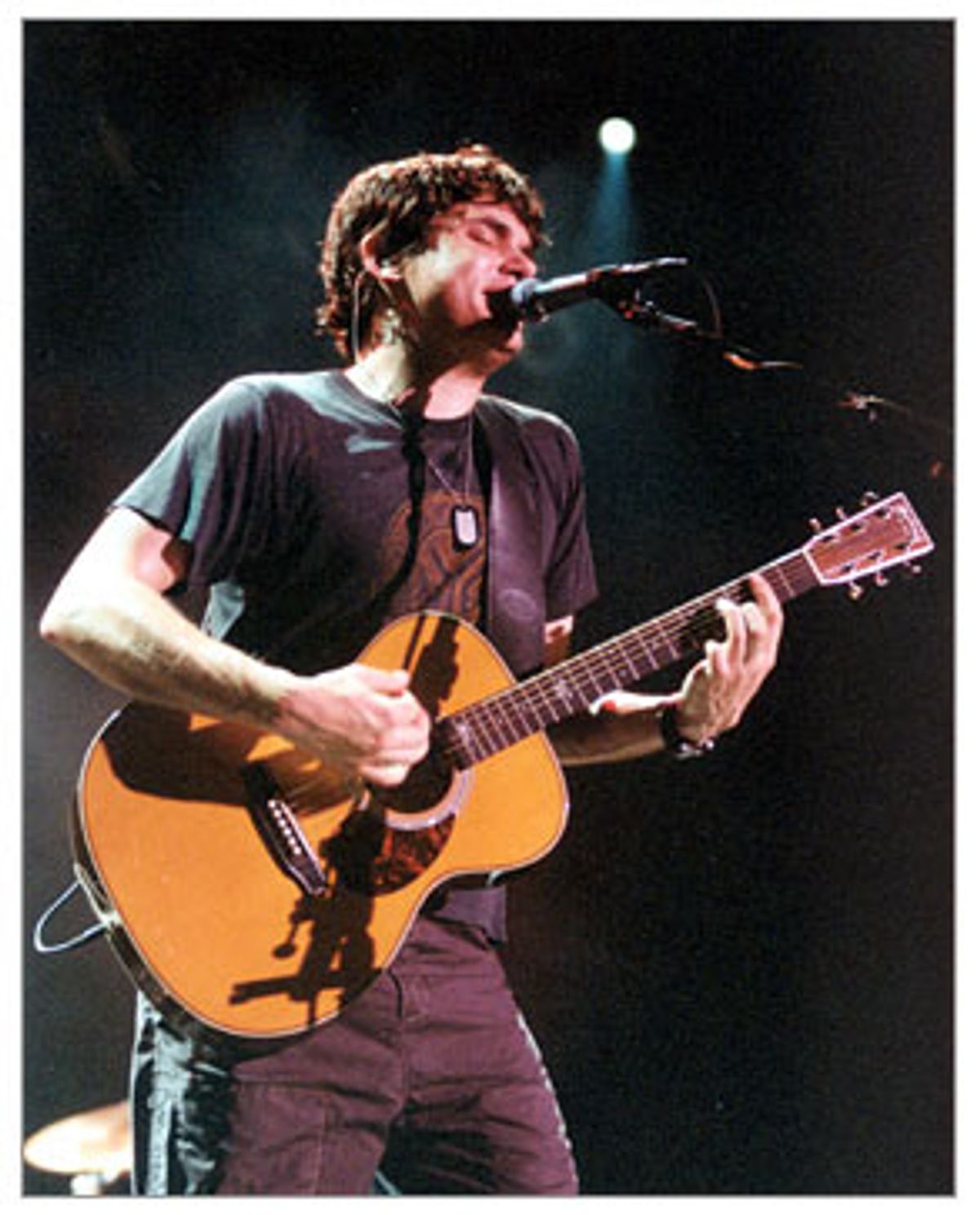 John Mayer is the best thing to happen to vanilla sex since the missionary position. Much like the regularly maligned ice cream flavor, kinkless intercourse has always been tastier than advertised. So when the musically and sexually adventurous alike dismiss Mayer's Berklee-tutored guitar and Abercrombie-swaddled purr as aural Vicodin for soccer moms and timid schoolgirls, it only goes to show how limited a palette both kinds of fetishists have. In fact, Mayer's new "Heavier Things" is just the thing to heat your bathwater on those occasions when you don't want to get your freak on -- but you're still game for seeing where some heavy petting might lead.

Mayer sidled into the limelight two years ago with the mildly rebellious "No Such Thing," on which he insisted "I am invincible" in all but a whisper and defied the powers that be by running through his old high school -- no doubt while chewing gum, and I bet he didn't even have a hall pass either. The single sprang from his second album, "Room for Squares," an acoustic-based collection of modest romantic ruminations that stirred equally modest heart flutters in suburbs and dorms across America. Mayer was always just a twitch of the larynx away from simpering, and his ability to resist that temptation seemed (again, modestly) courageous.

For years, women friends of mine have heard sex in Dave Matthews' voice where all that reached my ears was Peter Gabriel in need of a lozenge. But Mayer I hear, maybe because he strips the self-involvement and pseudo-yodels from Matthews' style, leaving a warm, cottony buzz, the vocal equivalent of lavender oil. (He also steers clear of Dave's Hacky Sac party vibe.)

Of course, they don't call the tame stuff vanilla for nothing. Mayer's follow-up, "Heavier Things" debuted at the top of the Billboard charts before settling comfortably in the top 10. Like those of his former tour mate Norah Jones, with whom he shares a knack for the genteel nuzzle, Mayer's brisk sales have been at least partly a fearful response to hip-hop hegemony. Yet virtual white flight isn't the whole story. From Missy Elliott's threat, "I'll put my thing down, flip it, and reverse it" to Chingy's inviting a woman to whip her genitalia at him "like a shortstop," there's a pretty narrow definition of sexuality on the charts these days. Pop sex has become a strenuous combination of pole dancing, Pilates and pro wrestling -- plenty fun, but not really practical when you've both got to work in the morning.

And now that hip-hop has all but completely colonized R&B, the former province of the gentle lover man, R. Kelly is as demanding a bedmate as any MC, and even a nice guy like Justin Timberlake plays at playadom. With the prognosis for quiet storm as bleak as that of poor Luther Vandross himself, who's to keep the scented candle burning?

Granted, a dude whose idea of a come-on is "Your Body Is a Wonderland" is an unlikely bedroom savior. But the awkward title of Mayer's follow-up to "No Such Thing" was part of its charm, as was the contrast between dud lines like "your skin like porcelain" and kindly details such as "I'll never let your head hit the bed without my hand behind it." Like Shakira's "Underneath Your Clothes," this was sex as adoring exploration rather than an expression of mastery.

Mayer was conscious of the rarefied gentility of the fantasy he advanced -- what he described on "City Love" as "the kind of thing you only see in scented, glossy magazines" -- and he also undercut it, fretting on the same song that there wouldn't be room in his apartment for his sweetie's toothbrush. Although he's sensitive, he's no prude; he jokes with interviewers about the difference between electric and acoustic guitars: "Well, one of them will get you laid -- and one will get you laid after like an hour and a half of conversation."

The shift in album titles -- from the coyly requesting "Room for Squares" to the deliberately pondering "Heavier Things" -- looks like bad news. Like so many pretty boys before him, Mayer wants to make sure you love him for his mind. But while his lyrics predictably fall flat when he's aiming to eff the ineffable -- the lead single, "Bigger Than My Body," fumbles toward some kind of spiritual transcendence -- his voice is so grounded and earnest that even then it sounds like he's reminding his honey to buy milk on her way home from work. Mayer is rarely revelatory when he flexes his brain, but he's often cute ("How come everything I think I need/ Always comes with batteries?") And when, on "New Deep," he pledges to be less superficial from now on, he also gently mocks his own pretensions, quipping, "I'm so enlightened/ I can barely survive."

So Mayer's curiosity is just a part of his romantic technique, which, while still self-deprecating, has smoothed out considerably. Mayer has learned that the secret of seduction is not to wheedle and plead but to quietly assume. On most of the songs here it sounds like both parties have slipped out of their shoes before the music kicks in. "Come Back to Bed" is a sharp contrast to the last record's "My Stupid Mouth," in which he tried unsuccessfully to talk his way out of a dumb comment. On the new song he surrenders ground ("You can be mad in the morning/ I take back what I said") without ever begging, and if you're at all susceptible, "I survive on the breath you are finished with" clinches the deal. Mayer doesn't even suggest that you'll be, you know, doing it if you slip back between the sheets. He's voicing the sensuality of monogamy, and he lusts after "Home Life," a fantasy both practical and idealistic: "I will marry just once/ And if it doesn't work out/ Give her half of my stuff/ It's fine with me."

None of which would matter if Mayer didn't command his own groove. The opening track, "Clarity," for which he recruited Ahmir "?uestlove" Thompson, the mighty drummer from the Roots, along with jazz trumpeter Roy Hargrove, is hardly the "hip-hop" move Mayer's been boasting about to the press. But the layering of guitar atop piano propels the song forward rather than just supplying a sumptuous backdrop, and the tune's break, in which Hargrove pushes against the drum fill, shows a far cannier rhythmic sense than most singer-songwriters display. For what it's worth, his hip-hop-accredited guest was impressed. "John Mayer is incredibly underrated. Ohmigod," Thompson raved in an interview with the Believer. Referring to the murky, heavy-breathing neo-soul masterwork of D'Angelo, Thompson added that Mayer "wants to do his 'Voodoo' so bad it hurts." (Mayer's manager, apparently, put the kibosh on the in-studio experimentation between Thompson and Mayer.)

If it seems like Thompson and I are overstating the case for Mayer -- well, we are. "Heavier Things" is just a tiny slice of what you can accomplish in a bedroom without throwing out your back or charging up the camcorder. But he's still a rarity. While nerdy white musicians have always coveted the imagined sexual prowess of their black peers, they usually try to cultivate a wild sensuality, as though overcompensating for their self-perceived unworthiness.

Though no one is likely to mistake Mayer's voice for D'Angelo's -- aside from Matthews, his clearest vocal antecedents are soulish white Brits like Paul Young or Peter Cox of Go West -- he's assimilated the subtler physical assurance and candor of R&B into his delivery. After all, there's a world of fashion accessories between chastity belt and bondage gear, and as wide a range of fantasies as well. Nice teenage girls aren't immune to orgasms, and not every soccer mom is a latent dominatrix. John Mayer never lights up the sky with garish strokes of passion, but he can put you to sleep with that special smile on your face.

Keith Harris is a writer living in Minneapolis.