Yesterday's bombings left Iraqis scared, pissed off and just plain freaked out. They also left a grisly souvenir, which some giggling kids showed me in the tall grass. 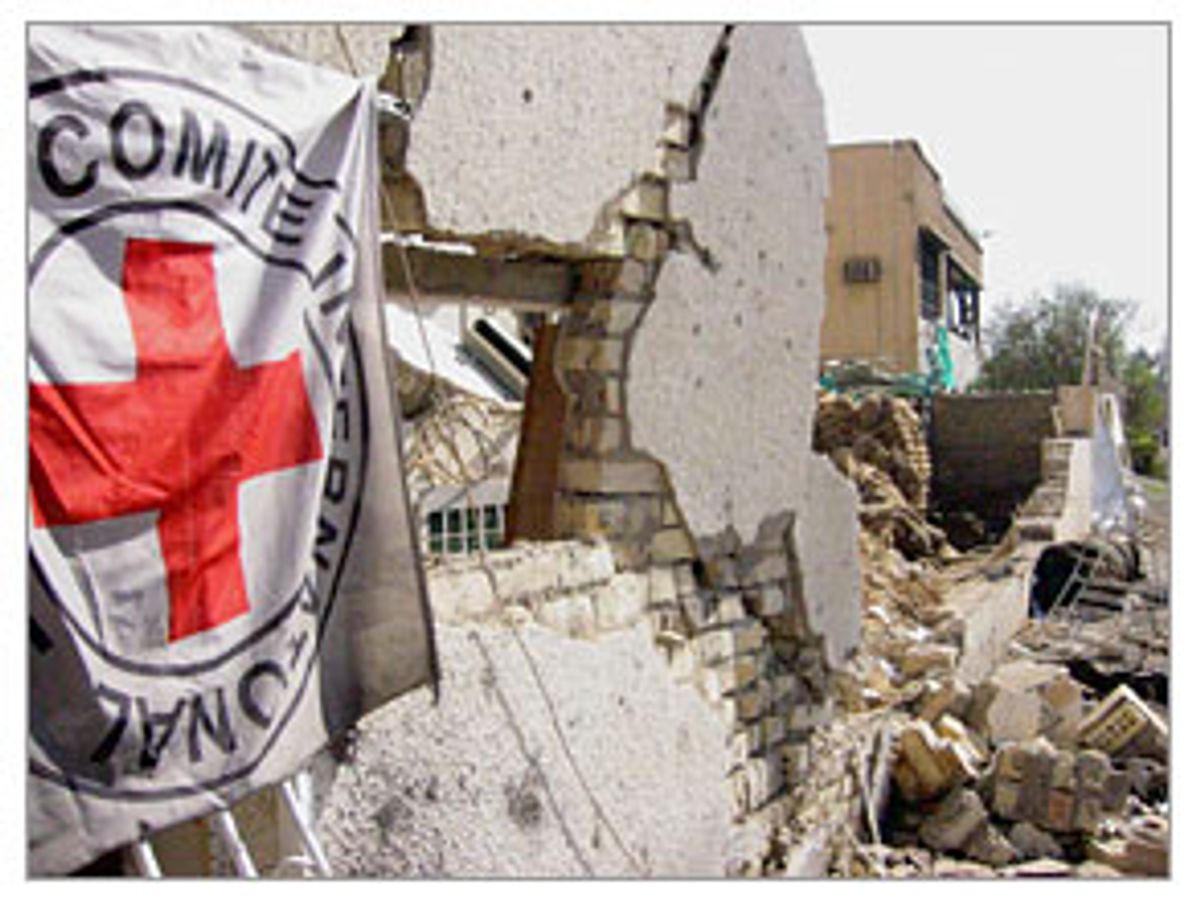 I had been at the site of yesterday's Red Cross bombing for about an hour when a boy tugged at my sleeve and asked, in Arabic, whether I wanted to see a foot. He and two of his friends had been shadowing me and my translator, Amjad, for a little while. They listened curiously while I talked to a man named Farrag, who was working across the street from the ICRC building when the bomb exploded. As Farrag spoke, the bandages on his head and hands began to arch ever so slightly away from his sweat-slicked skin. Yesterday morning, Farrag was reading and waiting for some co-workers to arrive when the windows and door of the office burst furiously inward. He was cut and brought to the hospital, which was where he was able to see the extent of the carnage -- people badly wounded, people missing limbs, people dead.

I asked Farrag whether he felt afraid to return to work in that neighborhood. "Why would I be afraid?" he asked. "There's nothing here anymore to bomb."

I've been in Iraq six weeks now. During my first trip here, shortly after the war, I stayed for a month. I protested heavily against the war, but in its aftermath, I felt compelled to see what had happened to the country at eye level. It seemed to me (perhaps as a result of my novelist's sensibility) that the most interesting stories were emerging in the wake of what journalists like to call "the bang bang." I wanted to watch Iraq remake itself, and try to convey the way in which that process informs and is informed by everyday life here. When I left the country in June, I believed that, as bad as things were, they were slowly, steadily improving. But my return in September and, especially, the events of the last few days, have made clear that I was being overly optimistic. Most Iraqis I speak to convey an increasingly angry sense of bafflement. To anyone who lives in Baghdad, it's obvious that the situation (with minor, thoroughly trotted-out exceptions such as certain schools being rebuilt) continues to decline. President Bush's statement Monday -- that these bombings are somehow a testament to increasing success on the part of the U.S. presence here -- would be hilarious if it weren't so depressing. A day like yesterday should have made the signals clear enough for even President Bush to read: Iraq's not waving, it's drowning.

Yesterday's car bombing at the Red Cross killed up to 15 people and injured scores more. Soon after, suicide bombers destroyed three police stations. A fourth targeted station escaped harm when the bomber was shot by a police officer before he had time to self-detonate. By the end of the day, at least 34 people were dead, 200 wounded. All over Baghdad, Iraqis are feeling scared, confused, pissed off and just plain freaked out. Like the Bush administration, they have no clear idea who might be responsible. It's a speculation game. Saddam loyalists. Al-Qaida terrorists. Shiite extremists. Syrian infiltrators.

The explosion smashed the hospital's pharmacy, lab and other rooms to bits. Doors, windows, tables, chairs, medicine and lab equipment lay broken and rearranged in the anarchistic aftermath of the blast. Miraculously, neither Dr. Massa nor any of his staff were wounded. When I met Massa, he was wearing a disheveled green sweat suit and his combed-over hair was slipping out of alignment. For at least awhile, he will be employed in the heavy labor of cleaning debris rather than the delicate practice of surgery.

Just now, a bomb went off in the distance. It's 8:45 p.m., Baghdad time. The blast was far away. It didn't even rattle the windows of the house I'm staying in. Far-off bombs make a sort of "Kaa-buuhmb" noise. Closer ones resonate with a penetrating alto "Buhhhhwoooomb" sound. The noise from the Red Cross bombing yesterday woke me from a dead sleep and, though I didn't know for an hour what had happened, I knew it was very bad.

The bomb at the Red Cross building detonated at a few seconds past 8:29 a.m., according to the stopped clock in the lab of the cardiac hospital. Dr. Jamal Jamil, a microbiologist, had just arrived at the lab. Normally, he would have been sitting at his desk near the front door. But he had gone to fetch something from the back of the room at the time of the blast and this, no doubt, saved his life.

In clipped, slightly shaky English, he described what happened. "There was a very loud, ah, voice. Then black. My brain stopped. Only one window didn't break [the one at the back, where he was standing]. I couldn't move. But I grope through the fumes. Smoke. Outside, I saw fire. Smoke. Shouting -- that someone in the ICRC is dead."

Two more blasts just now. Smaller -- rocket-propelled grenades maybe -- and a lot closer. The house where I'm living is in a quiet residential neighborhood. I live with four other journalists. We were all eager to move out of our various hotels, and we feel safer now than we did in them. We chose a house with a high retaining wall that shields it from the street, and we have an armed guard here at all times. On my first trip to Baghdad last May, these precautions would have seemed absurd. Now they're standard. One of my roommates just finished taping large X's on some of the front windows. If a bomb blast shatters the glass, the tape will check its fragmentation somewhat. I imagine those big X's of tape will become standard on windows around the city again. As they were during the war.

The boys at the blast site made it clear that they were really anxious to take me to the foot. We headed toward a large house across the street from the Red Cross headquarters, using a circuitous route to avoid the flooded parts of the street. The bomb had breached a water main, and oily, debris-choked water had pooled and spread in the street. In the center of the street, a large digging machine grumbled and ate away at the earth while 15 or so Iraqi men looked on, occasionally supplementing the digging with shovels. A handful of journalists wandered around a little aimlessly. A heavily equipped female photographer snapped pictures of an old Iraqi woman who wept as she looked at the destroyed building. A few other photographers hovered nearby, waiting to get their own clear shot of the crying lady. Red Cross personnel gathered in small clumps and murmured in low tones with their heads inclined toward each other but their eyes on the street. They had been told not to make any comments or statements to reporters -- all information was being disseminated through proper channels. When I asked a young woman with an ICRC badge if she could just describe briefly her experience at the time of the blast, she said, "No. I'm so sorry. I'm so so sorry. I can't." The whites of her eyes had turned a mottled pink and red. The ICRC has yet to announce whether it will pull more people out of Baghdad. In the last few months, it has already called members of its non-Iraqi staff home.

I'm not sure why the boys chose me as the one who should see the foot. Perhaps, since I'm a woman, they thought I might react squeamishly and be good for a few laughs. When I agreed to go with them, they waved me forward, and led the way joshing with each other and making cartoonish spooky ghosty noises.

As we tramped toward that foot, I couldn't get over how bizarrely accessible and devoid of authority or security the area was just one day after the bombing. No soldiers. No police. Only the ICRC building itself had been declared off-limits. Later that afternoon, I went to the bombed El Kadra police station where people wandered freely among charred, flipped vehicles in front of the station. A boy climbed down into the blast hole -- a crater roughly the size of a two-car garage. And I thought, If something like this happened in the U.S., the whole neighborhood would be locked up tight. Police everywhere. Cleanup crews. Forensic scientists. A sense of order emerging from the chaos. But that's not how things work here. One day later, and the site of all that carnage seems abandoned. Left behind.

No news yet about the explosions I heard earlier. If they were, in fact, small attacks on troops, they might just go unreported in the press. Iraqi friends of mine had hoped that the first Ramadan without Saddam would be a true party. But instead, the increased and random violence keeps people in their homes. A private security advisor with one of the networks here told us to keep clothes, money and documents by our beds. Have an escape route. Stay sober. Though the curfew has been lifted, we rarely go out at night.

I followed the boys to a place in the road where we couldn't avoid the water. One of the boys carefully set down some rocks as a sort of miniature footbridge for me to step on. Then we skirted the high wall that encircled an unoccupied house opposite the blasted ICRC headquarters. We entered a gate behind the house, and followed along the inside of the wall to a place in the tall grass where the foot lay. The boys held their shirts up over their noses and mouths and pointed. Yes, it was a large man's foot, severed just above the ankle. The force of the blast had catapulted it over the wall surrounding the house, and it had missed detection during yesterday's post-blast cleanup. We stood ringed around the foot, staring at it. After a few minutes, I looked up and nodded my head. The boys nodded and, without a word, led the way out.