Geeks who go low-carb see it as more than just taking off pounds -- they're reengineering the human organism, overclocking their own bodies. 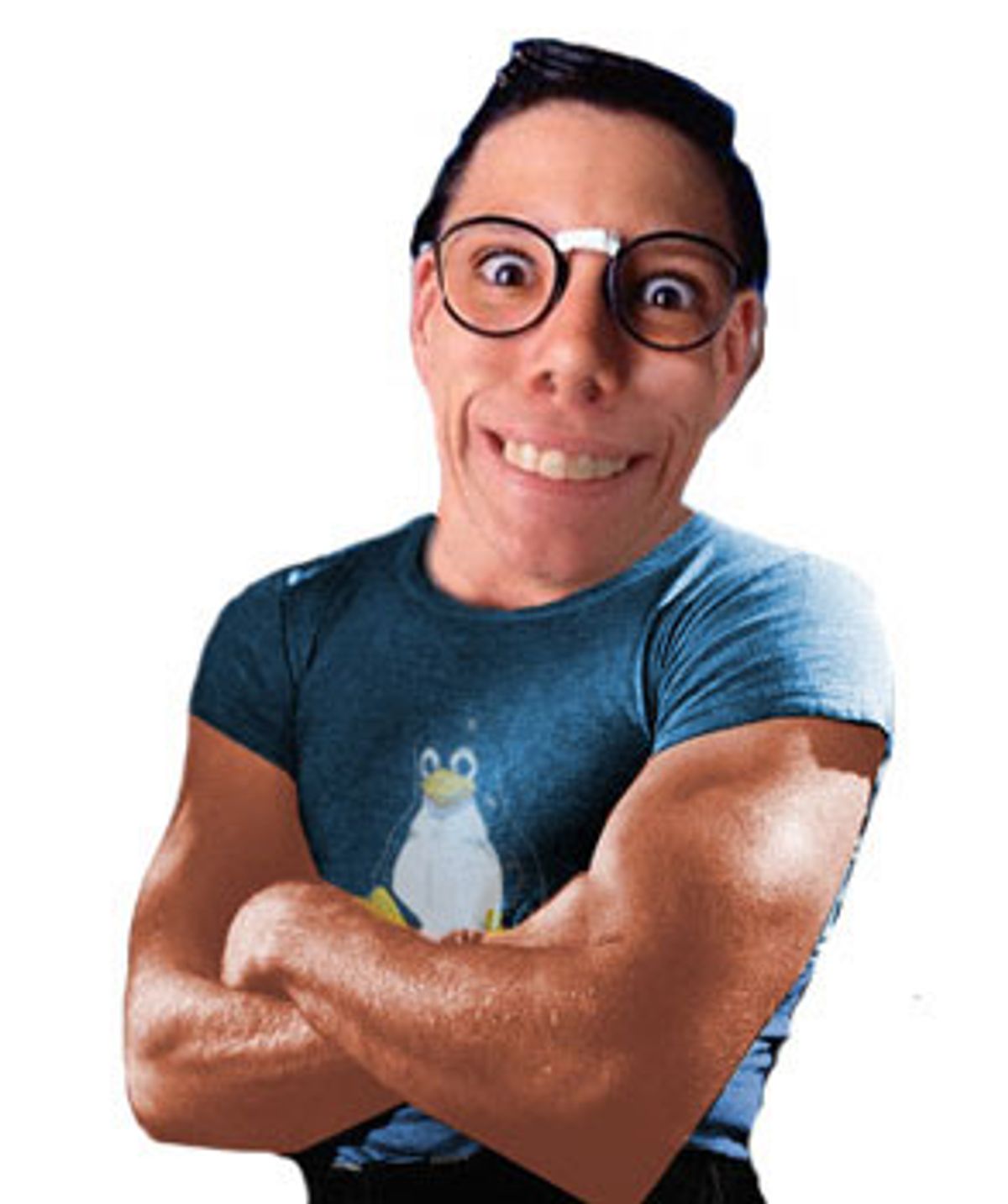 For Dave Sifry, 35, attending LinuxWorld in the summer of 2002 meant more than just a chance to luxuriate in the latest insider buzz about Red Hat, Suse and Debian. It also was an unexpected chance to learn about a body-reengineering hack increasingly popular with computer programmers and affiliated geeks.

When Sifry, now the co-founder and CTO of Sputnik, a wireless device company, saw Cory Doctorow, the boingboing blogger and science-fiction author, at the conference at San Francisco's Moscone Center, he almost didn't recognize him.

"I hadn't seen him in a while, and he had lost so much weight with Atkins -- maybe 35 or 40 pounds -- that he just looked like a changed man," says Sifry, who founded the Bay Area Linux Users Group and co-founded Linuxcare, a start-up aimed at providing support services for Linux users. But Doctorow, a self-described "renaissance geek," wasn't the only slimmed-down figure among the usual crew of techie conference-goers. Doc Searls, coauthor of "The Cluetrain Manifesto," was also looking svelter, from his own regime of low-carbing.

"To be perfectly frank, I thought it was nuts," says Sifry. "OK: You can eat as many bacon cheeseburgers as you want, and you still lose weight? Why doesn't this sound healthy? But when I saw two people who I respect do it, it really forced me to take a second look at it."

"We see people when we go to conferences that used to be a lot wider than they are now. Now, they're down to, like, one chin," says Searls, who lost 25 pounds last year in time for the Linux Geek Cruise in October, and has kept it off. "Cory blew my mind when I saw him. He looks like a skinny kid."

Picking up dieting tips at a computer conference could sound like the setup for a real groaner of a bad joke. Fairly or not, computer geeks have become cultural stereotypes for their embodiment of the modern-day version of the classic mind/body split: Many geeks tend to live their "real" lives in the virtual domain, while their bodies become forgotten blobs, crouched behind a monitor in some featureless room. Even the iconic penguin that reigns over all things Linux has a bit of a cuddly paunch.

But while there's nothing particularly bleeding-edge about eating the hamburger but not the bun, now that low-carb dieting has gone mainstream, the diet does appear to hold a special attraction for hackers, programmers and other close-to-the-machine dwellers. For some geeks, the low-carb diet is itself a clever hack, a sneaky algorithm for getting the body to do what you want it to do, a way of reprogramming yourself. Programmers, who are used to making their computers serve their will, are now finding that low-carb diets enable the same kind of control over their bodies.

Advocating eating protein in the form of burgers and eggs, while avoiding bread and pasta, as a way to lose weight is a diet plan that's drawn ridicule and sneers from mainstream nutritionists since the early 1970s, when the now-deceased Dr. Atkins started promoting the idea. But Dr. Atkins and other low-carb adherents argue that without an influx of sugar and carbohydrates for quick energy, the body is forced to burn off its fat. And the zealous advocates of the diet make this controversial claim: that when your body gets into this fat-burning state, dieters can actually eat more calories than they could on a low-fat diet, and still lose weight.

Doctorow, who lost 75 pounds by cutting out carbohydrates, sees a natural affinity between his brethren and the diet: "Read the alt.support.diet.low-carb FAQ, and you'll find people attacking their bodies like they would attack a logic board," he says. "Substitute 'faster bus speed' for 'metabolism,' and you've got something pretty close to an overclocking FAQ, he adds, referring to a practice popular with hardware hackers in which computer processors are tweaked so that they run faster than their out-of-the-box speeds.

"The low-carb thing is essentially a way of forcing control over the metabolism much like coders, geeks and hackers tweak their code and config files to make their machines run smoother," writes Sean Sosik-Hamor, a 27-year-old systems administrator for Pepper Computer, a wi-fi start-up in Lexington, Mass., in an e-mail. Sosik-Hamor says he lost more than 100 pounds through such dietary tweaking, a feat that took him down from 330 to 222 pounds, and which he blogs about here.

As digital-rights attorney Mike Godwin, who lost more than 80 pounds by cutting carbs, says, "It's like you're exploiting a security hole in your own body." He's quoting hacker Ian Goldberg, who should know -- Goldberg is famous in hacker circles for breaking the encryption on Netscape Navigator 1.1.

Since the LinuxWorld conference last year where Sifry caught the low-carb virus, he's lost 70 pounds, his blood pressure has dropped 30 points and his overall cholesterol numbers have gone down. And while he's reluctant to declare victory prematurely -- "I don't know where I'm going to be in a year" -- he's glad he's discovered this "backdoor" into his own body's workings. "All of a sudden," he muses, "[I've] found a new metabolic pathway."

Chat with low-carb dieters about their regimen, and they will soon bring up "ketosis" -- the state where your body is forced to burn off its fat reserves. On dieting message boards, they trade strategies about how to get to ketosis faster, stay in ketosis longer, and get back into it when you get off track, with all the ardor of teenage stoners on a quest to achieve and prolong the perfect high. Ketosis is their version of dieter's nirvana, where the weight is just steadily falling off, when your body is getting its energy from stored fat reserves instead of carbohydrates.

But look up "ketosis" in the dictionary, instead of on a dieting Web site, and you'll find all sorts of uncomfortable words associated with it, like "pathological" and "starvation." Oddly, the negative connotations of the concept perversely make it more attractive to hackers, who delight in using unexpected means to achieve a solution.

"The true definition of hacking is that of simple problem-solving, and making something do a task that it wasn't designed to do," writes Sosik-Hamor. "Ketosis is not a natural body state so the sheer thought of intentionally utilizing ketosis for weight loss is appealing."

There's also a subversive element. Go low-carb, and you're going against the dietary establishment, against the conventional diet wisdom from the USDA's food pyramid. You're doing something that you're maybe not supposed to do.

Mike Godwin started low-carb dieting back in 1998, when he weighed more than 300 pounds. He says he was "a little bit ahead of the curve" on the low-carb thing, since back then, all the dieters he knew were "still cutting their steak into 3-ounce portions" and avoiding fat like it was the blubbery enemy. He'd tried that, but found that the low-fat regimen of the likes of diet guru Susan Powter "was like eating grass," and it wasn't working for him.

"I'm perfectly willing to believe that what everyone knows is true is wrong, or at least might be wrong for me," says Godwin. "I had known about Atkins' popularity in the '70s. Because it was so counter to what everyone was saying I should do, I thought: I'll try it."

Sure, if you eat fewer calories and exercise more you'll lose weight, but if, like so many dieters, you're unable to follow that advice, who cares if it's an airtight theory? "If that's science, then it's science that has yet to produce a lot of results because American asses grow rounder every day," says Doctorow. "If you ask people to reduce their caloric intake and increase their exercise, you won't get a lot of good results. It's like going around complaining that people have crappy passwords."

"The hacker ethic is not necessarily being a formally trained engineer, not necessarily being someone who understands the science. It's a reverse-engineering perspective: Sometimes you're right and sometimes you're wrong, but it's based on empiricism," says Doctorow. "That's kind of the low-carb approach, which goes against the conventional wisdom about how you do nutrition and weight loss."

Scientific studies sanctioning the approach are just starting to appear, but there's a still a sense that one is tinkering with one's own body to somewhat unknown ends. "Maybe it will make us all grow third arms and go blind in 20 years," quips Doctorow. "It's sort of hard to tell. It represents a kind of hacker's approach, grounded as it is in jack-legged engineering rather than science."

The most controversial aspect of low-carb dieting -- which is only now being studied -- is the claim that you can actually eat more calories on a low-carb regime than you could on a low-fat one, and still lose weight. To borrow some jargon from the world of engineering: There's the possibility that you can actually run your body at a "specification" it wasn't designed for, in order to burn off more fat.

"I firmly believe that the low-carb system used by Atkins is a perfect example of hacking your body," writes Sosik-Hamor. "Massive reduction of carbs and carefully designing a balanced diet allows you to safely push the body into a state of ketosis and excrete fat out of the system faster than the standard burn rate of 1 pound per 3,500 calories. When in full induction mode I can eat 3,000 to 4,000 calories per day and lose up to 4 pounds per week."

But Searls warns against taking the hacking metaphor too far. Overclocking a computer processor has negative aspects that he believes don't have parallels in the low-carb dieting world.

"I think on the downside of what that metaphor suggests is that you are operating your body out of spec," says Searls. "Overclocking says that your body is specced for a certain performance speed, and overclocking it gets you a tradeoff between performance and heat, essentially."

"In a way, you are in fact burning off some of your body fat, and in that respect the metaphor is accurate. It's not accurate in the sense that you may be damaging your body in some way. It raises the suggestion that maybe you're doing something a bit unhealthy. And I don't think that's the case."

Godwin goes even further: "It might be that we're designed actually to operate that way, instead of eating a whole bunch of processed carbs. [With a low-carb diet] it actually may be that we're gearing our diets to how we should be eating. It might be a feature, not a bug."

But it's also useful to remember that no matter how attractive the metaphor, or the algorithm, dieting, like programming, is about doing what works, not the latest hot theory.

"We are not machines," says Searls. "It helps techies sometimes to think of their bodies as a machine, but it really comes down to whatever works for you."