Anthony Hopkins and Nicole Kidman team up for a decent, sincere big-screen fable -- but the scourging fury of Philip Roth's novel is nowhere in sight. 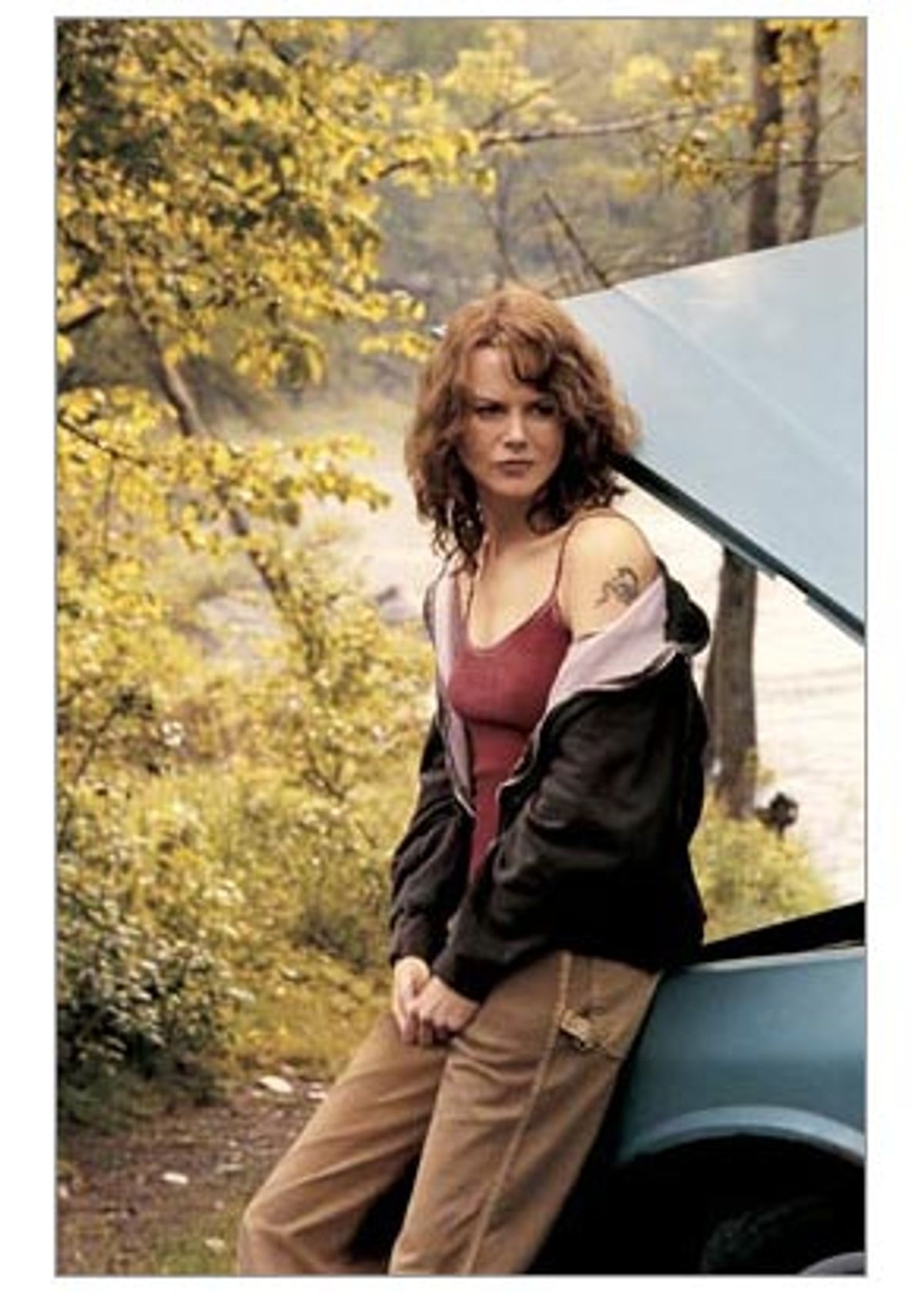 As a novel, Philip Roth's "The Human Stain," and the two books that preceded it in a loose trilogy, is perhaps the greatest achievement by our greatest living writer, a penetrating epic vision of American life and politics unequaled in American art since the first two "Godfather" films.

The new movie version of "The Human Stain," directed by Robert Benton and adapted by Nicholas Meyer, shows how it's possible to be faithful to the particulars of a novel and completely miss its sensibility.

Benton's film isn't a disgrace. It's an intelligent, handsome adaptation that doesn't sand off all of Roth's sharp edges, and it gives you the rare (these days, anyway) feeling of watching a movie made for adults. It would be easier to pan if it were worse. It's almost inevitable when a disappointing movie is made of a great book for people to claim that movies can never equal books. But we've seen enough great adaptations of difficult books (Jack Clayton's "The Innocents," his version of "The Turn of the Screw"; Kubrick's "Lolita"; John Huston's film of James Joyce's "The Dead"; Paul Mazurzky's "Enemies, a Love Story"; Philip Kaufman's version of "The Unbearable Lightness of Being"; Lynne Ramsay's film of "Morvern Callar," to name just a few) to see that it's not impossible for a movie to capture a book's particulars as well as its sensibility.

To be fair to Benton and Meyer, Roth's are difficult books to capture, being largely dependent on his incisively cranky voice. "The Human Stain" is the last in a trilogy that deals with the political insanity of three distinct American eras, '60s radicalism in "American Pastoral," '50s McCarthyist hysteria in I Married a Communist," and self-righteous delusions of the Clinton impeachment scandal in "The Human Stain." Roth wrote that that era was defined by "the ecstasy of sanctimony," and called it a time when "the moral obligation to explain to one's children about adult life was abrogated in favor of maintaining in them every illusion about adult life, when the smallness of people was simply crushing."

You can't say that the filmmakers have ignored the fury in Roth's novel. But they've done what they can to muffle it. Both novel and movie are narrated by Roth's stand-in, the writer Nathan Zuckerman (here played by Gary Sinise). Zuckerman is the observer to the tragedy of Coleman Silk, an elderly, tenured classics professor who loses his job at a small Massachusetts college in an instance of politically correct absurdity. Noting, five weeks into the term, that three students have never shown up for class, he asks of the absent trio, "Do they exist, or are they spooks?" It turns out that the three students are black, and Coleman is accused by one of using a racial epithet. (Lest anyone think this is ridiculous, recall the professor who got into trouble for using the word "niggardly.")

Shortly after that charge is made, Coleman's wife dies, which he attributes directly to the turmoil their life is thrown into, and he begins an affair with Faunia Farley, a young cleaning woman who's dealing with, among other things, being stalked by her abusive ex-husband Les, a disturbed Vietnam vet. Coleman's affair with Faunia seems, in the judgmental eyes of his former colleagues, yet more evidence of his political incorrectness.

The connection that Roth, as well as the filmmakers, draws between all these events is the impossibility of living an honest life in a country so enamored of sexual and racial hypocrisy. Roth's decision to write about racial passing was a kind of literary kismet. The constraints that ethnicity puts on self-realization, the mortal tug of war between feeling pride and feeling suffocation, has been one of Roth's great subjects (never more explosively than in his "Operation: Shylock"). It's what's gotten various half-wits to accuse Roth of being a self-loathing Jew. And it's what makes it impossible to condemn Coleman's passing. He's right to apprehend that the road open to him as a "colored scholar" would be a far narrower one than if he were white.

Reading "The Human Stain," you can't help but hear the voices of the people who claimed, "If Clinton had merely told the truth, he'd have been all right." It wasn't the smallness of that statement that was crushing but the naiveté. No one in America is ever all right by telling the truth, which is never a "mere" proposition. Especially when it comes to race and sex, and especially in an era when prissy moralism poses as sensitivity.

Some of that comes through in Benton and Meyer's movie. In the scene where Coleman (Anthony Hopkins) tells Zuckerman that he's having an affair with a woman years younger than he is, he talks of the wonder of having the sexual desire he thought dead suddenly brought ferociously to life at such a late age. The wonder in Hopkins' voice, the celebration of his resurrected libido, reminds you of why feminist critics have consistently made Roth such a target. Because he has never denied the rapacity of the male sexual instinct. (Harsh as it sounds, I have yet to hear a feminist argument against Roth that is the product of a working brain instead of a jerking knee.)

The tightly reined-in sexuality of the actress Mimi Kuzyk, as the faculty member who spearheads the end of Coleman's career and sends an anonymous note telling him he's exploiting an abused woman by sleeping with Faunia, speaks an obvious truth about the people who feel so ready to judge the sexual relationships of others. Have any of us, if we're honest, ever encountered someone who objected to a consensual sexual relationship between adults who didn't also strike us, at some basic level, as being profoundly uncomfortable with sex?

But these are fleetingly recognizable moments. Meyer's attempts to ground the movie in its particular political milieu, as well as to address the larger sexual and racial issues, only end up emphasizing how far this polite, handsome movie is from Roth's anger. It opens with three academics talking about Clinton and Monica Lewinsky, one of them saying that if only Clinton had fucked her she would have been his to control. As ugly as that is, it pales next to the language in Roth's novel: "If Clinton had ... turned her over in the Oval Office and fucked her in the ass, none of this would have happened."

Elsewhere, Rachel Portman's tinklingly sensitive piano score, and the late Jean-Yves Escoffier's autumnal cinematography, lie over the film as heavily as the snow that blankets its climactic scenes. The film is an illustration of its source rather than an adaptation of it. Much has been written about the miscasting of Hopkins as Coleman Silk and Nicole Kidman as Faunia Farley. In a way, though, they are perfectly suited to this movie, which is more interested in demonstrable displays of skill than of messy passion. Their actorly precision is both skillful and all wrong. J. Hoberman, in the Village Voice, uses Hopkins' casting to take a swipe at casting white actors in black roles. It would be more fitting to see the casting of Hopkins as the latest example of the American belief that real acting, and real culture, come from Europe.

Casting Hopkins in the role of a black man posing as a Jew is about as absurd as casting Bernie Mac in the role. And yet part of the point of the character is the mutability of race. Hopkins isn't lazy. He's in here pitching from start to finish, and he's sometimes very touching, as when he sits up in bed after making love with Faunia, in a state of confused ecstasy about how he wound up in this desirable woman's bed. It's not that Hopkins' clipped Welsh tones are wrong for a black character -- it's that they are wrong for an American character.

Kidman, predictably, overdoes the working-class stuff. You never forget that this is Nicole Kidman doing an impersonation of a poor, battered woman. But she seems to have something in her that allows her to keep her dignity even when she's not up to the part (or, as in Lars von Trier's upcoming, and atrocious, "Dogville," being abused by the sadist behind the camera). Kidman's best moment comes early, when Coleman fumbles with matches to light Faunia's cigarette and she gives a smile that is part withering amusement, part turned-on by a man in her sexual thrall.

What's most disturbing about Kidman's performance is the way Benton and Escoffier have shot her nude scenes so that we don't see anything. The moment Coleman sees her lying nude on her bed, and Kidman is artfully arranged to keep us from seeing either breasts or pubis, is emblematic of the reserved tones of the whole movie. When she moves up and down on top of Hopkins while they are making love, we're conscious of the camera moving to keep her breasts out of frame. Predictably, the young actress Jacinda Barrett, who plays the young Coleman's Midwestern girlfriend and who, not being a star, is not accorded the protection of fame, takes her clothes off. The surreal quality of the sex scenes in "The Human Stain" is that they embody sexual hypocrisy in a movie that is meant to be exposing sexual hypocrisy.

Both Sinise, who is too young to play Zuckerman and whose narration is irritatingly nasal, and Ed Harris, as Kidman's ex, give showy performances that are unusual for them (though they are very good in their shared scene, the movie's final one). As the young Coleman, the young actor Wentworth Miller gives an impressive performance that suggests the anger that's been bled out of the movie. Unfortunately, we don't quite get the conflict between his loyalty to his family and his desire to pass. One look at his uptight, upright, respectable family life and you couldn't blame anyone for beating down the door to get out. Part of the problem is that his mother is played by that imperious drag Anna Deavere Smith, who is as appalling as always. Smith seems unable to play a scene or deliver a line to a fellow actor without making it sound like an interrogation or an accusation.

There are good, brief performances from a quartet of actresses: Kerry Washington, fresh as always and, here, insinuating, as a young woman from Coleman's past; Lizan Mitchell as Coleman's sister; the fine character actress Margo Martindale as Les' court-appointed psychiatrist; and Phyllis Newman as Coleman's wife. Newman's one small scene is an expert portrayal of near-obsessive organization struggling to keep the lid on panic.

As a drama about racial passing, "The Human Stain" is nowhere near as good as Douglas Sirk's 1959 remake of "Imitation of Life." That's not intended as a flip comparison between the film version of a respected novel and a famous weeper. Sirk's is perhaps the strongest, most uncompromised movie about race ever made in this country, a mixture of craziness and acute observation that blurs the lines between virtue and narcissism, between racial pride and racial submission, until the issues it raises are unresolvable. It's melodrama that rises to the complexity of art. "The Human Stain" takes a complex work of literary art and reduces it to tasteful melodrama. Its smallness is simply crushing.