A superbly creepy Hayden Christensen portrays Stephen Glass as a journalistic miscreant who doesn't just soil his profession, but leaves us feeling dirty, too. 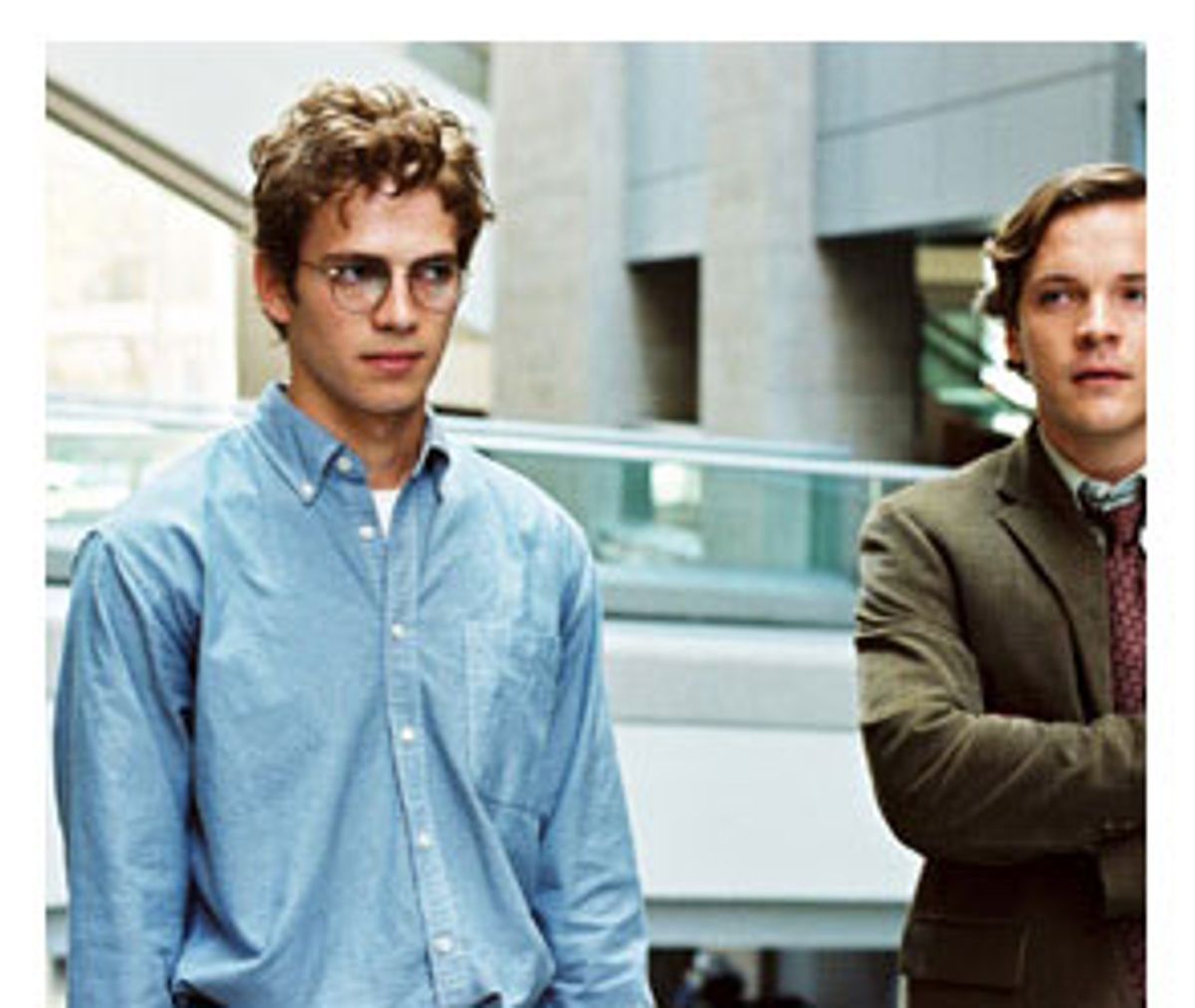 There's no way of knowing if people who don't work in journalism-related fields will be particularly interested in writer-director Billy Ray's smart, tightly coiled debut picture, "Shattered Glass." The movie tells the story of Stephen Glass, the supposedly brilliant young reporter who was busted in 1998 for fabricating stories he'd written for the New Republic, where he held a staff position. The received wisdom is that the American public is so jaded about the press in this country (and for some very good reasons) that nothing can really shock us anymore: Don't journalists make stuff up all the time? Why should we be rattled by a Stephen Glass or a Jayson Blair?

"Shattered Glass" doesn't overtly answer those questions, which some might see as a flaw. But I find it heartening that Ray felt strongly enough about the idea of "fake" journalism to make "Shattered Glass" in the first place. In the press notes for the picture, Ray includes a statement that reads in part, "When people can no longer believe what they read, their only choices will be to either turn to television for their daily news, or to stop seeking out news entirely. Either path, I think, is a very dangerous one for this country."

Of course, there's a charming naiveté to the notion that most Americans get their news from reading, as opposed to watching television, in the first place. And all of us, even if we'd prefer to get all our information from reading, rely on broadcast news to some extent. But Ray strides forth boldly from the idea that print journalism matters, and that even if we think we don't care about it, we should. The traditions of print journalism, including the sense of conviction and dedication that has traditionally been passed down in the business from the old-timers to the young, serves as one way of maintaining the integrity of news gathering in this country. Sure, there are journalists who distort the truth, knowingly or otherwise, but the risk of breaking that code of loyalty within their own ranks, and bringing shame and dishonor to themselves and the profession (not to mention losing their jobs), is at least one motivation to strive for accuracy. News organizations depend on the notion that journalists actually care about telling the public the truth; and without that layer of trust, they're sunk.

From the tone of "Shattered Glass," Ray -- who also wrote the script -- seems to have thought about these issues carefully. Hayden Christensen plays the boyish, bespectacled Glass, the kind of guy who ingratiates himself around the office by bringing people food or coffee when they really need it, or by complimenting the women on their jewelry or outfits. And in a very short time, he has made himself invaluable at the New Republic, a magazine with a long, proud and rather snooty tradition of brainy, liberal political reporting. Glass comes up with stories that are too good to be true -- zany tales of young Republicans misbehaving abominably in hotel rooms, or of teenage computer hackers making big-bucks business deals -- which he presents in staff meetings with lots of aw-shucks, "This idea stinks," disingenuousness. His colleagues and higher-ups -- including his boss, Michael Kelly (Hank Azaria), and his editor Caitlin Avey (Chloë Sevigny) -- thrill to Glass' animated presentations, as well as to the stories that he eventually turns in. In addition to being a seemingly solid reporter, he brings the magazine an element of glamorous showmanship that dazzles them.

Ray makes it clear that this is a disproportionately young staff -- and although he doesn't come right out and say it, the suggestion is that talented, energetic young people are among the few who can afford the luxury of working for a prestigious but low-paying magazine in whose ideals they genuinely believe. Ray captures the element of snobbery that floats in the air at the New Republic. But he also seems to understand how, among newspeople, snobbery is inextricably linked with the pride they take in their work. Glass slips into that environment perfectly, giving the impression that he's giving the magazine the best he's got. And that seems, to everyone on staff, to be pretty damn good.

But Adam Penenberg (Steve Zahn), a young reporter at an online publication (it goes by the almost unbelievably squaresville name Forbes Digital Tool), scents something fishy about one of Glass' stories, and he begins to dismantle it piece by piece. Glass scurries to throw him off the trail, even going so far as to create a phony (and phony-looking) Web site for the fictitious company featured in his story. Meanwhile, the publisher of the New Republic, Marty Peretz (Ted Kotcheff), has fired Kelly, who was beloved by his staff; the group doesn't warm to the reporter who's been promoted to take his place, Chuck Lane (Peter Sarsgaard). And Lane's authority at the magazine is further undermined by the fact that he's becoming more and more distrustful of Glass, whom Kelly had supported loyally, even though he'd picked up on more than one danger signal that the young reporter was making facts up out of whole cloth.

Ray unravels this tale of newsroom intrigue and splintered loyalties in a way that's almost suspenseful -- a neat trick, considering that even though the world of journalism is relatively glamorous in the grand scheme of things, we're still essentially talking about office machinations and politics. But the actors make us understand how the culture at the magazine both fortifies them in their mission of bringing readers the "truth" and unduly inflates their sense of their own importance. At one point, the always-charming Melanie Lynskey, as a young policy reporter, turns in a story that she's attempted to fill with Glass-like jokes and liveliness. Sevigny's Caitlin has to clamp down on her, telling her that she needs to stick to her own straightforward style, but Lynskey's frustration is clear: She's struggling against the reality that Glass is considered the magazine's most valuable property, and everyone else has been made to feel worthless.

Azaria makes a wholly sympathetic and likable Kelly (even though most readers may remember Kelly, who was killed last spring while reporting on the war in Iraq, as a vituperative scold of Bill Clinton). Sarsgaard gives a subtle and neatly controlled performance -- at first, because he's the unpopular guy who we know is going to end up blowing the whistle, we feel a bit wary of him ourselves. But his way of dealing with Glass, in the end, is gratifying to those of us who believe that Glass' transgressions are among the most shameful in the history of journalism in this country. (I confess that I felt a cold, hard satisfaction watching Christensen's Glass squirm on the hook, as if I were a witness to the punishment of the real-life Glass himself.)

But it's Christensen who does the most to anchor the mood of "Shattered Glass": He's superbly creepy, padding around the New Republic office in his stocking feet (an act of supreme regular-guyness that only underscores his arrogance and deceptiveness), dipping his head humbly to suggest deference and lack of self-confidence, when all the while he's pulling a major con. When his bluff is called, Christensen's Glass whines and wheedles, further manipulating his higher-ups into thinking that he may be so desperate as to commit suicide -- now that they know he's duped them, he's attempting to milk their sympathy, to remind them, like a desperate ex-lover, of everything that they used to like about him. But the desperation that Christensen shows us doesn't invite our sympathy -- it only jacks up our coldness toward him. And that's exactly as it should be. Christensen stretches his performance to the far end of unlikability, a difficult thing for a young actor to do. He's not a delicious villain, the kind we love to hate; he's simply one who courts our scorn and derision and leaves us feeling culpable ourselves -- a little bit dirty because we see how, if we had been his colleagues, we probably would have bought his act.

Maybe, in the end, that's why "Shattered Glass" is so effective. It makes us understand how willing we are to be fooled, how easily we'll buy a line of goods if it's presented to us in a way that entertains us or captures our imagination. As much as we might sometimes wish we didn't have to trust journalists, we really have no choice. When they knowingly lie, no matter how psychologically troubled they may be, it's a betrayal of their profession and of us. We have every right to take it personally.