The billowing dust bowl of HBO's "Carnivale" may offer an unprecedented exploration of despair. But how much can viewers take? 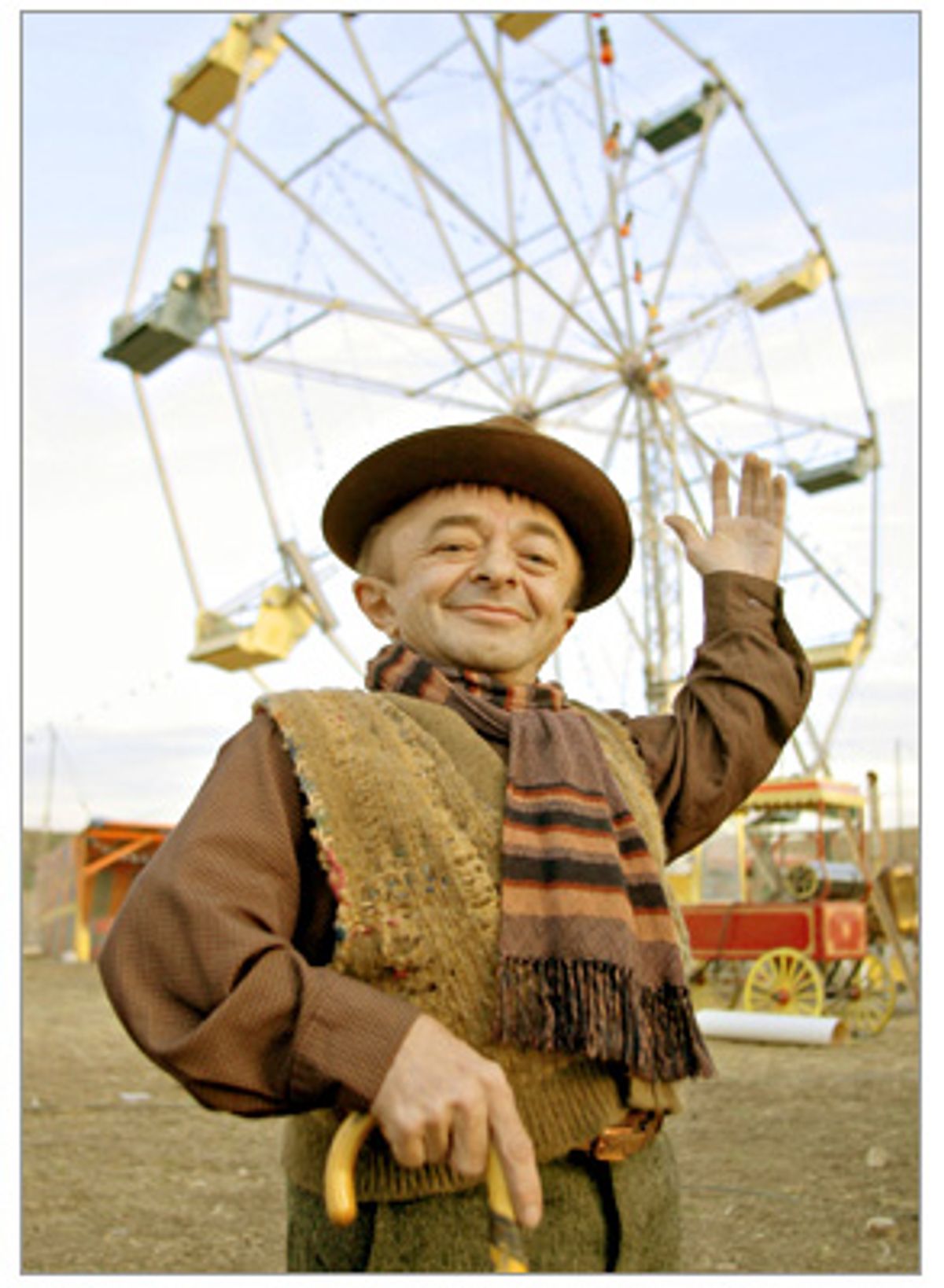 In 1934, the worst drought in U.S. history hit the central plains. Overplowed and overgrazed lands created massive dust storms known as "black blizzards." Thousands of farmers whose topsoil had blown away or whose land had been repossessed by the bank packed up their belongings and fled the plains in search of work elsewhere. HBO's "Carnivale" begins on this dusty, deflated landscape, unleashing an unruly tangle of misfits, zealots, and chaotic spirits whose spells and superstitions blend seamlessly with the confusion and desperation of the one of the darkest times in U.S. history.

"To each generation is born a creature of light and a creature of darkness," Samson, the carnival boss, soberly informs us in the first episode. But we seem to meet creatures of darkness over and over again, from the absinthe-drinking blind man with the penchant for bad news and omens, to the catatonic, stricken-faced fortuneteller who badgers her daughter telepathically. Justin Crowe (Clancy Brown), a local preacher, seems to offer some hope at first, welcoming destitute migrant farmers into his parish and then setting up a place of worship just for them. But before you know it, old preacher Crowe is using his curious supernatural powers to pour vengeance down upon those who stand in his path. Even Ben Hawkins (Nick Stahl), the young farmer whose mother dies and whose farmhouse is bulldozed in the first episode, has nothing but bewilderment and bad dreams to offer in the place of hope. He has strange powers similar to Preacher Crowe's, and like Crowe, has little grasp of what they mean or how to use them. If "Carnivale's" unrelenting eeriness and cumbersome pace are designed to bring the hopelessness of the Great Depression to life, then it's succeeded in spades. Still, it's worthwhile to ask just how much slowly unfolding sadness viewers can take.

In this sepia-toned world populated by bearded ladies, Siamese twins and women clutching dead babies, feeling empathy and concern for any of the characters is a blatantly self-destructive act. Crowe is confronted with selfish parishioners, disheartened vagrants, a distant and blindly supportive sister, and frightening powers, which he wields without discipline. When his new parish burns to the ground and the children housed there are burned to death, we recognize that this is the "unimaginable cruelty" Samson (Michael J. Anderson) warned us about from the start. Still, as Crowe falls to the ground in agony and an eerie wailing soundtrack leaves us mired in the despair of death, some part of us is silently vowing to divest any concern in Crowe's pursuits henceforth.

Similarly, it feels safe to assume that we met up with wayward farmboy Hawkins at an all-time low point in his life, burying his mother in the dust as the bulldozers stood by to knock down his home. Then Hawkins starts having flashbacks of healing dead cats only to watch his mother kill them again, hissing variations on a, "That boy ain't right! He's got the devil in 'im!" theme. In other flashes, his mother lies on her deathbed screaming, "Don't touch me!" Was she screaming because she didn't want Hawkins to heal her, or because the devil in him repulsed her? It doesn't seem to matter either way. Will Hawkins wise up and find love with poor Sofie (Clea Duvall) or satisfy some Oedipal urge with the snake charmer Ruthie (Adrienne Barbeau), or shuffle around mutely as he has so far? The only thing that's certain is that any small hope of a positive outcome will be punished swiftly and unforgivingly.

It's one thing to avoid the "hugging and learning" of mainstream television, which frequent "Carnivale" director Rodrigo Garcia referred to in a recent interview. It's another, though, to serve up such a steady diet of anguish and dashed hopes that viewers refuse to take the risk of making an emotional connection. Without one, we're left with a surreal "Twin Peaks"-style shockfest that, however entertaining it was in David Lynch's hands, hardly bears repeating.

Of course, any show about 1930s-era carnival demands the requisite gaggle of freaks, and recent episodes have focused increasingly on the human emotions and hopes of the carnies, instead of just letting them linger in the background like expensive props, hissing and leering and just generally creeping us out. But even when we get to know these characters a little better, they prove to be utterly doomed as well. Sofie unceremoniously loses her virginity to a local guy on the floor of a café. The local turns out to be married, and her telepathic mother chides her about the whole affair. Dora Mae (Amanda Aday), one of the young topless dancers in the carnival, is attacked by a mob of men at a show. She seems rattled but fine afterwards when her father (Toby Huss) tries to soothe her, but later a carnival hand finds her strung up and murdered with the word "harlot" carved into her forehead. Later, the dead girl's sister Libby (Carla Gallo) tries to leave for Hollywood with her father and Sofie, but her father backs out at the last minute, leaving their dreams of escaping the carny life high and dry.

The carnival's location on the fringes of town and on the fringes of acceptable society presents a compelling metaphor for the times, except that real, familiar relationships and an exploration of societal norms never really enter the picture. The folks in town are mostly depicted as a dreary, selfish, faceless mob, with a few exceptions in the prideful prostitute Samson visits during a black blizzard and the local sheriff who seeks out Hawkins to heal his sick mother. In an effort to humanize the carnival's mixed bag of nuts, the locals are revealed as the true freaks time and time again. Still, sorting between the lesser of all evils isn't anyone's favorite pastime, particularly when the overarching theme is that shit happens to everyone and there's not much you can do about it.

Which can really force you to question whether or not, after a lifetime of watching men in white hats prevailing over men in black hats, you're prepared to digest fare this chaotic and bleak. Each week we witness fairly innocent characters being ripped to shreds by their harsh circumstances, to the point where we don't want to hang out with these poor bastards any more. After all, when you have no control at all over your destiny and don't understand what little power you do have, what's the point in moving forward? Why not just surrender to the whims of a cruel universe? To creator Daniel Knauf's credit, "Carnivale" naturally toys with such existential questions along the way, as it leads us on a tour through the trapped, hopeless corridors of the Great Depression.

Still, each episode of "Carnivale" brings back that disappointment you feel as a kid when you come to the last few pages of "The Grapes of Wrath," and those poor Joads are in worse shape than ever. Sure, I recognized even then that, when Rose of Sharon generously offered up her breast milk to a hungry vagrant, it was supposed to be a touching metaphor for mankind's persistent drive to endure despite every hardship. That didn't keep me from finding the whole thing tremendously depressing, and sort of gross to boot.

Unmitigated pain and disappointment might be new for television, and therefore worthy of applause, but the appeal of such a dark path wears thin pretty quickly. While the most dire circumstances and intensely disturbing events will capture an audience's attention, holding that attention with subtler expressions of human frailty and hints of optimism constitutes a far greater challenge to the storyteller. Hopefully as it nears the end of its first season, "Carnivale" will live up to Samson's original claims, presenting a more balanced portrait of both the cruelty and the divinity found in the human experience.