Jason Priestley talks about playing a bisexual rogue in "Die Mommie Die," the car crash that nearly cost him his life and the mixed blessing of his "90210" fame. 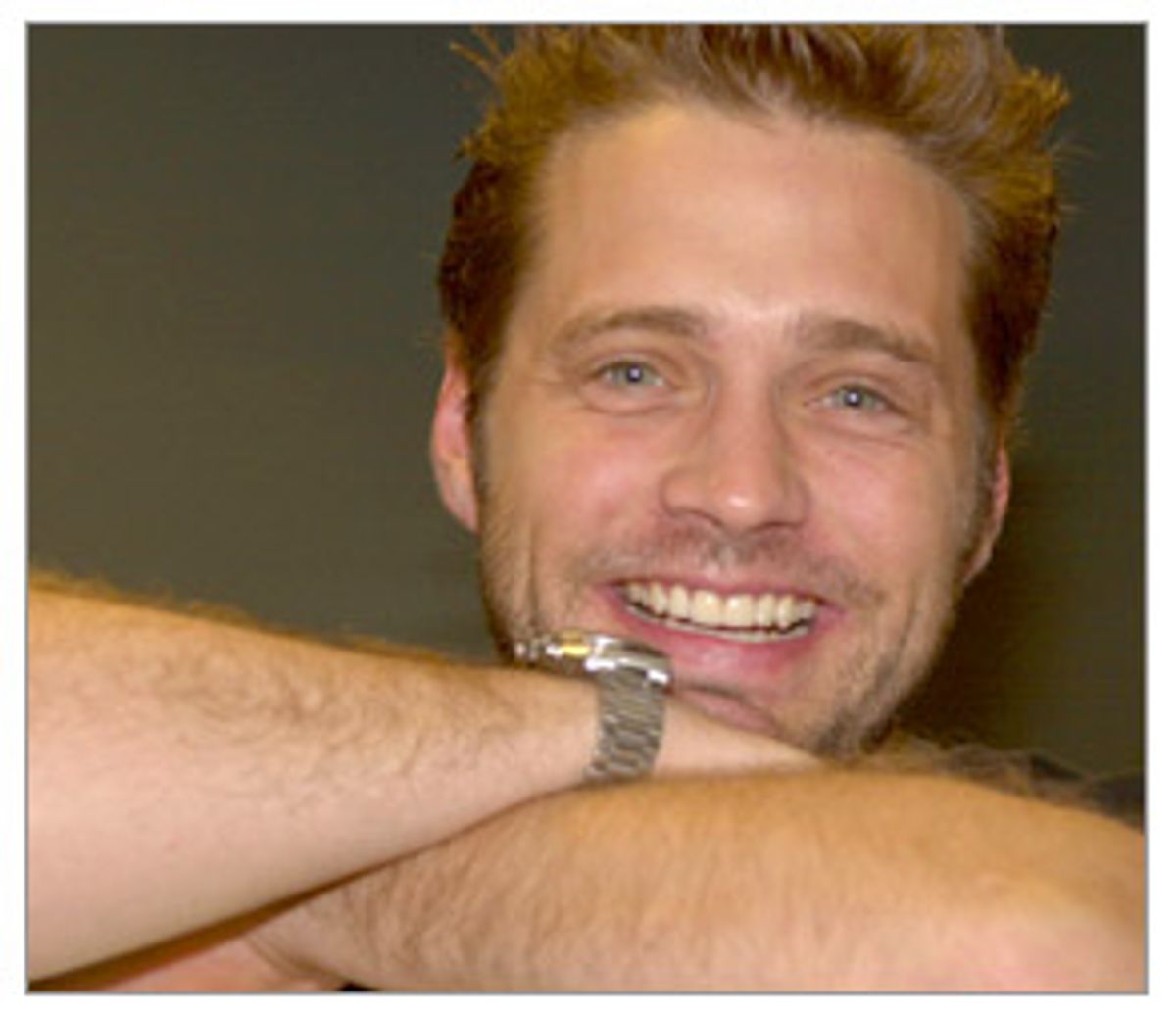 Talking to Jason Priestley is a little like talking to that sweet, good-lookin' jock we all remember from high school. The actor, now 34 but best known for playing young Brandon Walsh on that '90s show -- that is, Aaron Spelling's now-classic "Beverly Hills 90210," is polite and even bouncily enthusiastic, particularly if the conversation turns to sports, but is clearly uncomfortable thinking too hard or talking too long about himself and his career.

Salon interviewed Priestley during a junket for gender-bender Charles Busch's strange, satirical faux-noir "Die Mommie Die," in which the former TV star plays actor Tony Parker, who is said to have an "11-inch dong" or, as one character puts it, the "biggest cock this side of the San Andreas fault" and who carries on simultaneous affairs with a mother (Busch), her daughter (Natasha Lyonne) and her teenage son (Stark Sands). As the well-endowed Parker, Priestley utters lines like "You can't disregard me like one of your false eyelashes" with admirably solemn conviction.

"Die Mommie Die" -- a curiously campy choice for such a hunky, lunky, mainstream guy -- was Priestley's last film before the dramatic August 2002 race-car accident that almost took him out of commission altogether. While taking practice laps at the Kentucky Speedway, the die-hard driver crashed head-on into a wall at nearly 180 mph and suffered a spinal fracture, a closed head injury, a broken nose and broken bones in both feet. He says he's now completely recovered.

And hey, even after a full day of interviews, Priestley does look healthy, fresh and frisky, shifting around on a chair in a New York hotel suite. He later confesses that he'd much rather have spent the day indulging his latest passion, wakeboarding. He wears a tan suit and sea-blue shirt (no tie), his hair is lightly frosted blond, his facial hair (a Van Dyke) is trimmed just so, his skin is tan and unblemished, and his teeth are super-white and super-straight. His famous blue eyes zoom around the room's accumulated beigeness, as if seeking an escape route. His publicist has ruled questions about "the accident" totally, completely off limits, but after a few minutes of actor talk, Priestley can't help bringing it up himself.

What made you want to play a bisexual rogue like Tony Parker in "Die Mommie Die"?

As an actor I seem to be drawn to characters more than anything else. And Tony Parker, to me, was just one of those characters that was so interesting and so different than anything I'd ever played before that I really jumped at the opportunity to play him. I just knew that he was going to be so much fun -- that, in that mid-'60s bad actor way, it was going to be so much fun to play those scenes -- that I jumped all over it.

Do you tend to pick your roles based on what you've done previously and with a sense of where you want your career to go?

Well, I imagine that, at one time, playing a character that dedicatedly -- albeit campily -- participates in both gay and straight sex, might have been considered kind of a risky choice for an actor. When a mainstream, popular actor like you takes this kind of role, does that indicate something of a change in how people are reacting to gay roles on the screen?

I think so. I mean, if you look at the success of "Will and Grace" and "Queer Eye for the Straight Guy" and of many types of entertainment that classically have been labeled as "gay," they're much more mainstream now. I think that speaks well of us as a society, that we're much more accepting of other things and other ideas and not so judgmental of people that are maybe a little bit different than us. I think it kind of gives you hope for the world, doesn't it? Maybe a little bit?

Of course. When you took this role, was it a conscious decision to say, "You know what? I can afford to do this now"?

It never entered my mind that I was doing anything other than that I was playing a really good character in a great movie. It was never even a concern or a worry or anything.

That's great to hear. What was the actual experience like, working on the film?

It was great. It was a great place to go to work every day. Mark Rucker, the director, made it a really, really fun place to go and be creative and to do really fun things and the rest of the cast -- it was such a talented ensemble -- we really all had a great time sort of finding the levels of the scenes.

What was the biggest challenge you encountered while making it?

There was nothing particularly challenging. It was really enjoyable. Usually in a movie there'll be one or two scenes where you go, "Oh man, I'm really dreading doing this scene" or "Oh God, I can't believe I'm doing this," but there was none of that on this movie. During rehearsals there was a lot of laughter, but obviously when the camera was rolling we had a lot of work to do, so we just got down to it.

So were there silly, wacky things going on, on-set?

We didn't have time. We shot this movie in 18 days, so there was no time for high jinks or anything. We just had to [slaps thigh three times] get to work.

Did you base your portrayal on any specific actors or characters?

Did you do any research? Watching old films in the genre?

No, I'm very familiar with the history of film and with the actors that came before me. And as I was reading the part and finding the character, those were the guys that I leaned on and emulated here and there. I took little bits here and there and made a strange melaaaaange.

I'm still trying to find a movie where I can just play Van Heflin, because he was awesome. I'm just trying to, like, find that one role where it's like, dude, this is Van Heflin, and then just do it. I don't know. One of these days.

You've been doing some work in the theater -- "Side Man" on the West End with Edie Falco, and this is a very theatrical movie. Charles Busch, who wrote "Die Mommie Die" and stars in it, is primarily a stage actor. Do you feel like you have to prove that you're a serious actor after having been on TV for so long?

Yeah, well, that's the battle. Anytime you're on a show like "90210" that was so popular, and so popular with the young people, a lot of people just want to write you off and dismiss you -- "Aw, that's that guy from that fucking show" -- and they don't want to take you seriously. So yeah, you really have to work hard and prove your mettle as it were, all over again. That's just the way it is. People like to categorize everything and everyone. It's very easy to categorize all of us people from "90210" and say, "Oh, those are those kids from that show," whereas I'm 34 years old, you know, and I'm not a kid anymore. Nor was I then; I was a full-grown adult just playing a young person on television. And sometimes it's an uphill battle, but it's one that I fight every day. It's just the way it is.

Do you think you'll ever get to a point where you can stop fighting that battle?

At some point I hope I will, where that sort of negativity and negative view of me will end, but I have no control over that. All I can do is what I can do and all I can do is keep working in interesting movies and keep playing interesting roles to the best of my ability.

Do you feel like it's all negative? I mean it's opened doors for you ...

It's also closed a lot of doors for me. I mean, a lot of people look at me and all they choose to see is that I played Brandon Walsh on television and that's their thing, that's fine.

You played hockey for a long time. Are you still playing?

I just started about a month ago. Obviously my feet were broken so badly in the crash that it took me a while to get back on the ice.

Do you still have a lot of physical effects left over from the crash?

This was the last movie you made before the crash, right?

Yeah, we wrapped this movie about seven weeks before the hit that I had. It was my last movie before race season. Because I said to everybody, "Look, guys, I'm racing this year and I've got to take 15 weeks off to go race." And I was third in the championship when I went in. Goddamn it!

Are you going to go back to racing?

You're not? Because you were saying for a while that you thought you might.

Well, I was thinking about maybe doing some testing this winter, but no.

Do you feel like the accident changed your perspective?

Do you think it will affect the way you choose roles?

Yeah, I'm more careful now about the roles that I choose and the reasons that I choose them. Sometimes in the past I would take movies where I was like, "Ah, whatever, I'll just go to work." Whereas now, if it's not something that I really want to do, I don't do it. I'd rather just stay home. Because time is precious.