The government knows that Iraqi insurgents have a cache of shoulder-launched missiles. So why are troops still ferried in unprotected aircraft? 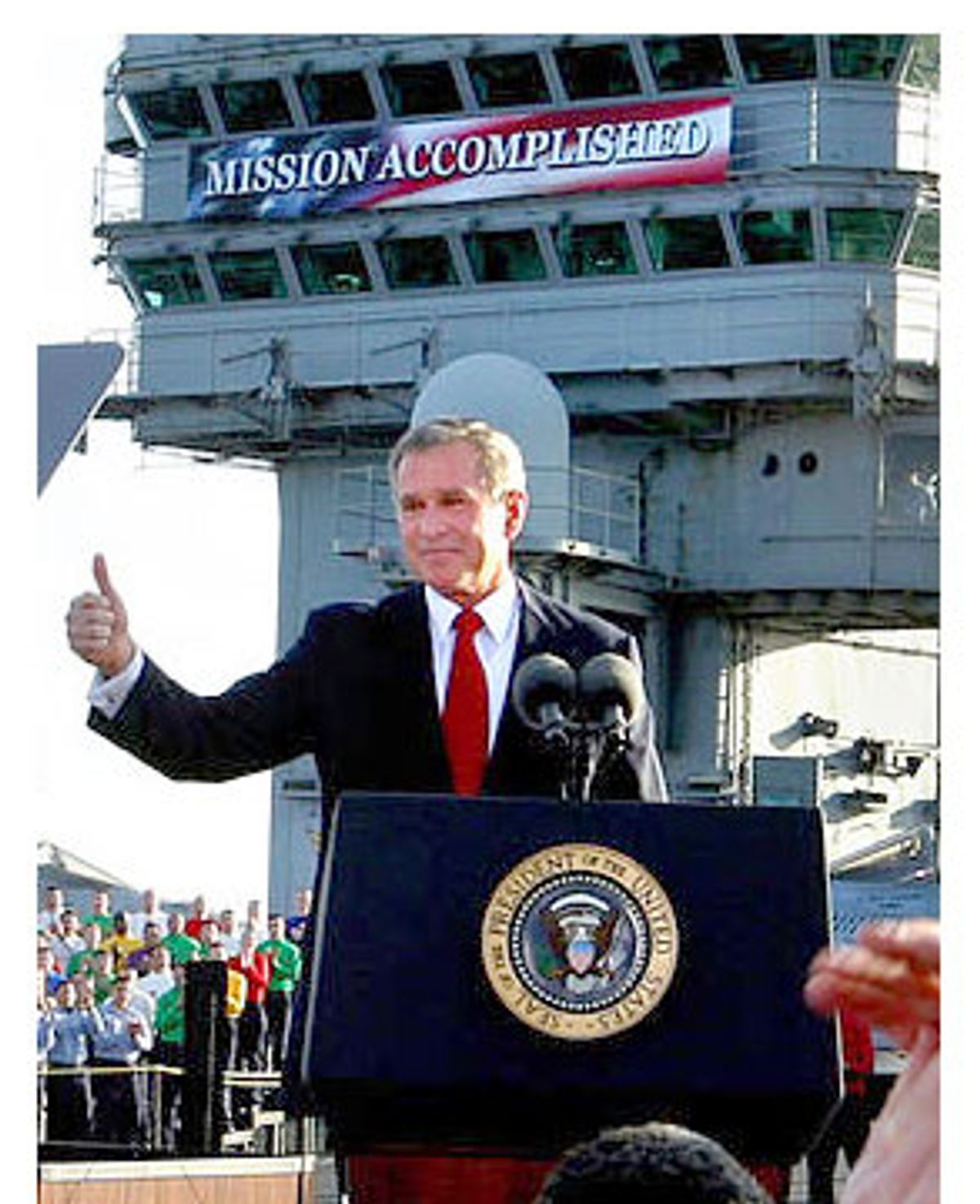 When a shoulder-launched missile was fired on Sunday from the shelter of an Iraqi date grove and blew the rear rotor off a Chinook transport helicopter, the United States suffered the single most lethal attack on its troops since the invasion of Iraq began more than six months ago. But obscured in the initial government comments and press accounts of the deadly attack was a crucial point:

The tragedy was predictable. And though it has long been known that hundreds of shoulder-fired missiles are circulating among hostile forces in Iraq and throughout the Middle East, the Bush administration and congressional leaders have done little to protect the commercial passenger jets and some military helicopters that ferry thousands of troops in and out of the war theater.

Although Chinooks used for Special Forces operations are reported to carry anti-missile technology, a U.S. Army official, speaking on condition of anonymity, told Salon that the National Guard CH-47 Chinook helicopter shot down on Sunday was unprotected. The chopper was being used to ferry at least 36 troops from Fort Carson, Colorado's, 3rd Armored Cavalry Regiment to the main U.S. military base in Baghdad; from there, they were to proceed to Kuwait City, where they would have boarded one of two daily commercial airliners that the Pentagon has hired to bring troops home for a two-week break from the Iraqi war zone.

Sixteen troops died and 20 were seriously injured when the helicopter exploded and crashed in flames near Fallujah, a center of loyalty to fallen dictator Saddam Hussein.

Though the U.S. troops aboard the Chinook were probably thrilled to be taking a leave from the war, their entire route home would have been vulnerable. Like the downed helicopter, the commercial jets that would have flown them out of Kuwait lack expensive anti-missile technology. These airliners have been chartered to transport nearly 500 troops per day to Frankfurt, Germany, and then on to either Baltimore, Atlanta, or Dallas/Fort Worth. Similar commercial craft are used to ferry about 90 percent of the U.S. troops that go into and out of Iraq. Critics inside and outside the U.S. military have warned for months that the big, lumbering jets are obvious targets for Iraqi insurgents who are trying to kill American troops and drive the United States out of Iraq and the Middle East.

Earlier this year, the Pentagon proposed a $25 million program to begin equipping the commercial airliners used for troop transport with advanced technology to protect them from the shoulder-fired missiles. But when the Bush administration did nothing to win approval of the measure, Republican leadership in the House of Representatives slashed the request to $3 million, far short of the sum needed to expedite wartime protection of the aircraft.

"[Sunday's] tragic events in Iraq are a reminder of the reality of the threat posed by shoulder-fired missiles," Rep. Steve Israel, D-N.Y., told Salon. "These weapons are easy to acquire, easy to use, and have now become a weapon of choice among terrorists. Secretary [Donald] Rumsfeld acknowledged as much [Sunday] morning, yet we aren't doing enough to protect troops transported on civilian aircraft and we aren't doing anything to protect civilians."

In a series of stories since the Sept. 11 terrorist attacks, Salon has disclosed that the spread of the missiles has alarmed military brass, airline security experts and some elected officials. The launchers are small, light and easy to hide; al-Qaida operatives have them, security experts say, and so do other terror organizations. Late last year, suspected Qaida terrorists fired on a charter jet filled with Israeli travelers at Mombasa, Kenya, only narrowly missing the target. Over the past 20 years, over half of all combat aircraft lost in global conflicts have been shot down by shoulder-fired missiles.

The danger from shoulder fired-missiles in the Persian Gulf region is well-known. Last year, terrorists launched an attack just outside a Saudi Arabian air base, and over the summer, Saudi officials captured a large cache of shoulder-fired missiles. From time to time, U.S. military officials have turned up buried caches of missiles in occupied Iraq. Still, despite capturing many shoulder-fired missiles, Saddam acquired so many of the portable missile systems that the Iraqi resistance is still well-armed.

"The resistance has been targeting aircraft at Baghdad Airport for several months," says Vincent Cannistraro, former chief of counter-terrorism for the CIA. "I have heard of at least 26 SAMs fired at aircraft. The routine for aircraft landing or taking off at the airport has included countermeasures against the SAMs."

On Sunday, in the aftermath of the Chinook take-down, Defense Secretary Donald Rumsfeld was asked about the shoulder-fired missile arsenal held by the Iraqi resistance. His reply: "Enormous numbers. Enormous numbers ... Oh, have to be more than hundreds. There are weapons caches all over that country. They were using schools, hospitals, mosques to hide weapons. Think of it, in Bosnia, in the last six months, they have found 40 tons of weapons in a country that we've occupied for six years."

Israel, a member of the House Armed Services Committee, is one of a handful of congressional experts on the missile threat who have pressed, without success, for measures to protect military and U.S. civilian aircraft from the global proliferation of shoulder-launched missiles. But he's baffled that President Bush hasn't done more to protect the troops. Along with Sens. Charles Schumer, D-N.Y., and Barbara Boxer, D-Calif., Israel sponsored a bill to equip all commercial airliners in the U.S. with anti-missile systems -- an effort that could cost up to $15 billion, by some estimates. Due in large part to administration opposition, that bill died on Capitol Hill.

As part of the debate surrounding the president's request for $87 billion to fund the ongoing military operations and reconstruction in Iraq, Israel and Boxer tried -- unsuccessfully -- to obtain financing to protect the 300 commercial jets that the Pentagon most often uses to transport our military forces within the United States and overseas.

Top national security officials began meeting last year to assess and address the risk that shoulder-fired missiles pose to U.S. airliners and, by extension, to the U.S. economy. But to date, critics say, the federal government has done almost nothing to prepare for the possibility -- some call it a probability -- that terrorists will use shoulder-launched missiles against American commercial jetliners, either within or outside the United States.

When the Bush administration this year allowed the much more modest $25 million measure to protect troop-transport craft to wither, some military officials were outraged. Though Bush portrays himself as a firm ally of men and women on the front lines, the critics said, he was leaving them vulnerable. "I am appalled," one Defense Department official told Salon earlier this year, asking to remain anonymous. "We are setting ourselves up for a fall. We are paying lip-service to force protection and instead are digging a deeper hole in which to bury our head."