Gone in the blink of an eye

Berkeley researchers declare 14 million U.S. jobs are at risk of being outsourced. 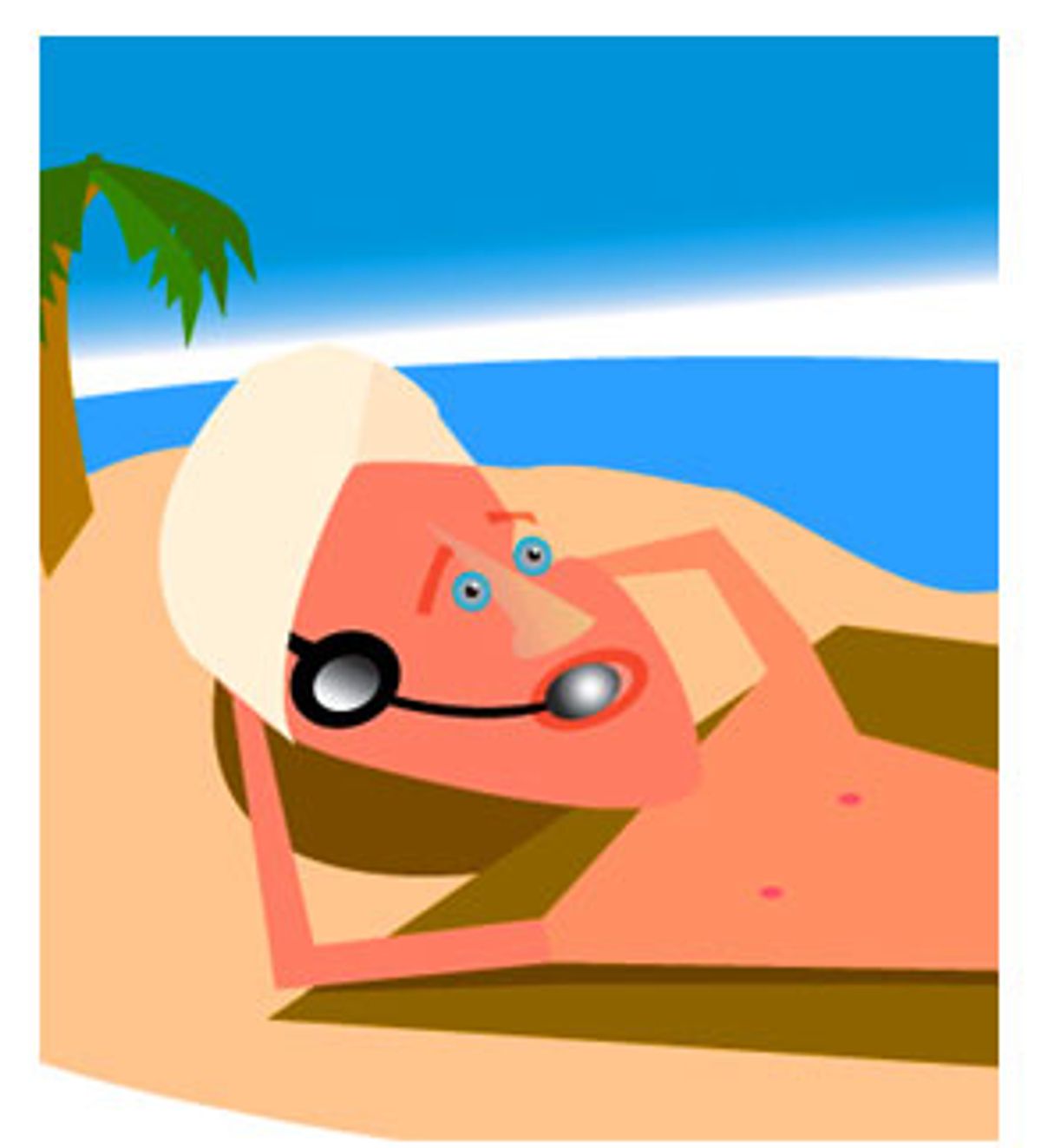 If every white-collar job that could be easily outsourced to Russia, China and India goes the way of the customer-service call center, 14 million positions will be eliminated in the United States, according to "The New Wave of Outsourcing," an academic study released in late October.

Researchers Ashok Deo Bardhan and Cynthia A. Kroll at the Fisher Center for Real Estate and Urban Economics at UC-Berkeley's Haas School of Business calculated that some 11 percent of all U.S. occupations are "vulnerable" to outsourcing.

While Bardhan and Kroll stress that this figure represents the "outer limit" of how many white-collar jobs could soon migrate from the United States, their research also notes just how easy it is to relocate operations that require little infrastructure. The incentive to do so is huge: An American computer programmer is paid, on average, $60,000 to $80,000, while a coder in India makes $5,880 to $11,000.

The report highlights in bright color two pressing questions. In this century, will Silicon Valley become the faded symbol of a race-to-the-bottom global job market in the same way that Flint, Mich., and its fading car-manufacturing factories did in the last? Or, will globalization bring new opportunities to developing economies that desperately need them? Salon spoke with Bardhan on the phone from his office in Berkeley, Calif., about the implications that outsourcing has for the U.S. labor market and the world.

You refer to a widely quoted figure from Forrester Research that states 3.3 million jobs are likely to be lost in the U.S. to outsourcing by 2015. But you suggest that Forrester's estimate is low. Can you talk about why you think it's a conservative prediction? And how you came up with your own numbers?

Usually, we look at the economy along verticals, along industrial sectors. [This time] we decided to analyze it along occupational lines, since computer programmers exist in the computer industry, but they're also employed in the banking sector and elsewhere.

We went through all the 800-odd occupations that make up the U.S. labor market. Then we used a kind of heuristic, a rough-and-ready algorithm, to see what occupations are the most vulnerable to outsourcing. The attributes that we used are things like there is no face-to-face customer-service requirement. The job should be Internet enabled. It should have high information content. There should be a significant wage differential between the U.S. and abroad.

We narrowed it down to those occupations where already some outsourcing has either occurred or is being planned. Then we added up. What are the total number of jobs in these occupations?

The main issue here is simple, really. These are white-collar jobs that are vulnerable to outsourcing. One way of looking at it is: If one payroll job can go, so can another.

And, then, looking at it from the other side, which countries are acquiring all these outsourced jobs? Together, the three large emerging markets -- India, China and Russia -- produce nearly three times as many science and engineering graduates each year as the U.S. Now, the educational levels at least at the basic science and engineering graduate level are pretty good. In the case of India, you have the additional advantage that English is the main language of business, communication and media. You also have a kind of institutional similarity in many cases. For example, India has, broadly speaking, the same legal system and similar accounting standards.

Then you have these really large wage differentials. When you have a wage differential of five to 15 times between the U.S. and these countries, and if the job can relatively be done at the same level of skill and productivity, there's no question that it makes the job market here vulnerable in the medium term.

So do you think the outsourcing of white-collar jobs is actually being under-hyped by the media?

We have done a kind of forward-looking paper. The chances of being wrong are pretty high in this kind of a situation. If you were to look at where the whole situation stands today, I wouldn't say that a lot of jobs have gone already. The entire India business-process outsourcing sector employs around 250,000 in jobs like accounting and legal research. I'm separating the software aspect from this business-process sector.

And the 250,000 jobs that have been created in India, I wouldn't say that they were jobs that existed in the U.S. It's not as if it was a one-to-one transfer of jobs.

But, as I said, we are looking forward, and there is no question that we are probably in the early stages of business-services outsourcing.

You argue that it's likely that something similar will happen with white-collar jobs even more quickly. Why?

Think of it this way: It's easier to set up a service job in terms of organizational and logistical issues at the other end. These jobs require office space, a computer and a telephone. To set up a steel plant requires a whole lot more complicated coordination. Supply networks have to be set up, and there are a whole lot of other issues.

Business service jobs are organizationally, logistically, structurally simpler to set up. If you already have trained accountants in India, transferring accounting jobs there requires setting up an office with good telecom links to the U.S., computers, and basically you're ready to go.

So, how big a factor do you think that outsourcing is in the so-called jobless recovery that the U.S. is experiencing right now? There have been these great reports about the overall growth of the U.S. economy in the third quarter this year, but then people are still struggling to find work here.

That's a good question. I think that it is a factor. I don't want to go overboard and say it's a significant factor. Because we still don't know: If the jobs were not being created there, would they be created here? That's the question that you're asking, and it's really a difficult one to tell right now.

That figure was came from U.S. firms announcing the establishment of offices and facilities and centers. In India, the media gave an estimate of how many jobs were being created because of that. It doesn't mean that it created them right away.

I was there last July, and every day there were major U.S. firms saying so-and-so firm plans to open a payroll-and-accounting office in such-and-such an Indian city, which would be employing around 3,000 people or 4,000 people. Big numbers are being bandied about.

We didn't want to make too much of that. But the reason why it was included in the opening introduction of our report is that this was going on at the same time that layoffs were going on in the U.S.

That's the significance. So, in that sense, there's no question that part of the jobless growth is because of that. But would it have made a big difference? I'm not so sure. The U.S. is a huge economy, after all.

Do you think that there is a xenophobic element in the fact that some people are claiming: "Oh, I can't find a job because all the jobs are going to India." Do you think that is in play in the U.S. discussions about this phenomenon?

That's again a good question. Tough times always bring out xenophobia. This is actually a situation where a lot of the companies and businesses seem to be doing OK. The economy is growing, but the jobs are not growing. You would expect to see even more kind of xenophobia in a job environment like that, I suppose.

People should understand that in a free-market system in the context of a globalizing world, and with large wage differentials, I dont see how this phenomenon can be contained, short of major legislative action.

Do you think that it's likely there will be protectionistic measures in the U.S. which will have any impact on outsourcing?

Here's the issue: I think that one has to realize that there are some difficult times ahead. And we don't want to sound kind of unsympathetic at all. This is the impression that a kind of cold-hearted reading of the report might give.

But protectionism is not the answer. I think that the American people should lobby for increased funding for education, for training, so that there is constant innovation and dynamism in the economy, which keeps creating higher-value jobs.

That's what happened when manufacturing outsourcing took place, right? You had all these service-sector jobs that were created. You had software. You had dot-coms. A lot of people got jobs there.

You need something like that this time. That's the only way to stay ahead of the game.

At the end of your report, you make several remarks about possible likely impacts on the U.S. job market because of this phenomenon. One is migration of unemployed U.S. white-collar workers to lower wages for service-sector jobs.

That's the worst-case scenario, because ultimately the job market has to adjust. Or, the wages will adjust downward significantly, so that it becomes competitive again not to outsource the jobs and to have them done here.

Or, the best-case scenario is, there's continuing innovation. There's creation of new sectors in a dynamic economy. New firms are established. Higher-paying, value-added jobs are created. So, basically, a repeat of what happened when the manufacturing outsourcing gathered steam. That's the best possible outlook that one can look forward to.

In one chart, you list San Jose and San Francisco as two of the areas in the U.S. most vulnerable to this phenomenon. Can you talk about why that is, and how big an impact you think that this will have on Silicon Valley?

In the case of San Jose, it's very clear it's because of the higher-than-average presence of those vulnerable, outsourceable jobs, particularly in the computer-related sectors -- the programmers, the database administrators.

In the case of San Francisco, it's that plus some of the business support jobs: the back-office business jobs -- accounting, payroll clerks.

In a place like San Francisco you have a whole lot of jobs connected to the business and the finance world, so quite a few of those are vulnerable, too. There's a disproportionate number of these vulnerable jobs. The other factor, of course, is that the wages are significantly higher than even in the rest of the U.S.

As is the cost of living.

Yes. But if let's say a firm were looking to cut costs, and if they had a number of offices all over the country, they might get rid of this one first. If you wanted to outsource those operations abroad, obviously it's better to cut costs at the most expensive location.

So, say you're somebody who is living in San Francisco and working in one of these jobs that's potentially vulnerable to outsourcing. What advice would you have for this person?

Oh boy. Let me ask you a question: What would you have said to a blue-collar worker back in the '80s and '90s?

I don't know. What did people say?

The talk at that time throughout the country was that retraining needs to be done.

People need to acquire new skills all the time. In a fast-paced globalizing world like ours we are all liable to be obsolete in the blink of an eye.