Martyred vampire Spike is back (sort of!) on the new season of "Angel," which has recaptured at least some of the Buffyverse's magic. 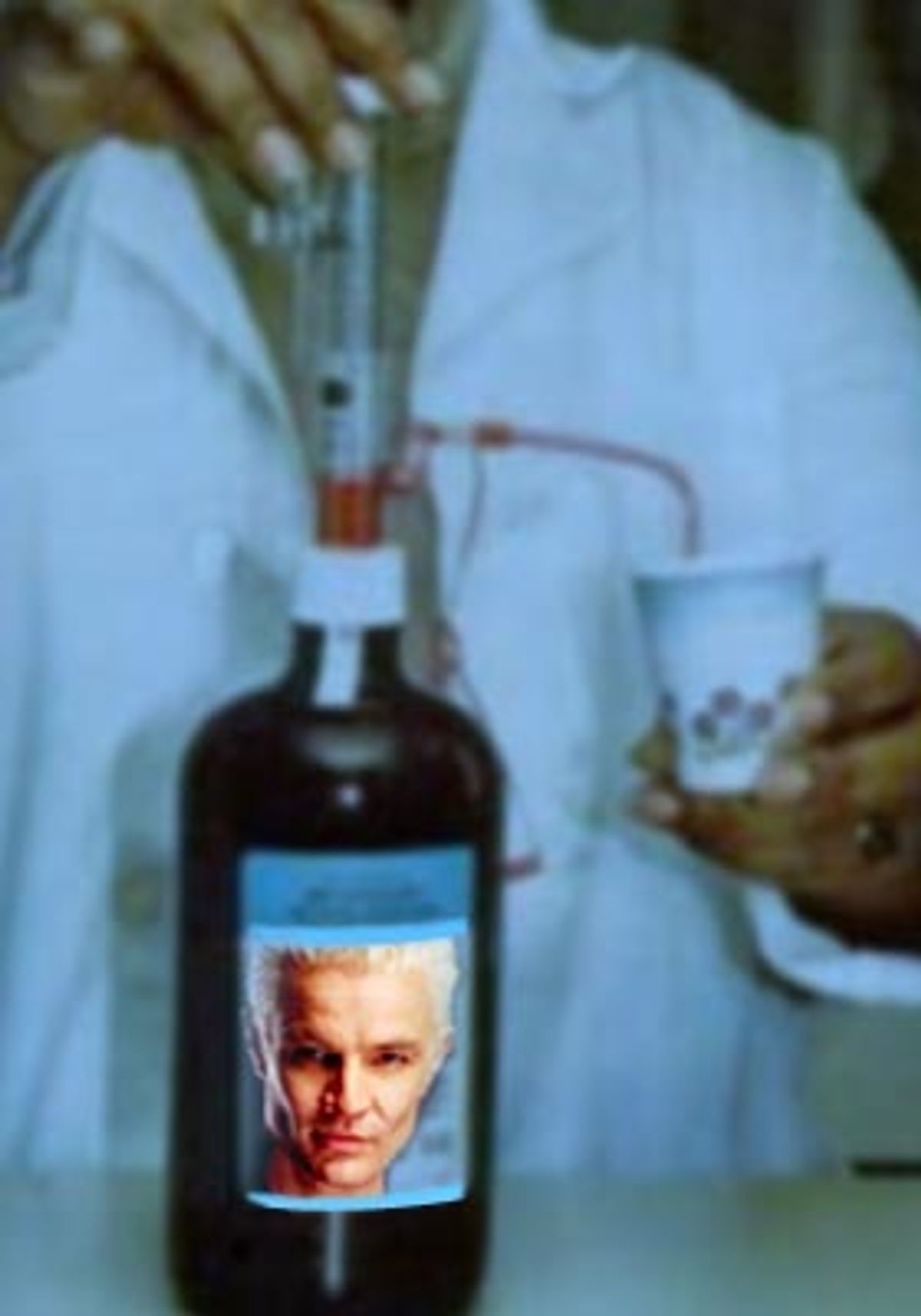 This season of "Angel" is methadone for "Buffy" addicts in withdrawal, a Wednesday night palliative for the pangs left by that big void on Tuesdays, almost the real thing but not quite. So it's only right that "Angel" has brought back one of the most popular supporting characters from "Buffy," Spike -- well, kind of. Last seen perishing in a glorious self-sacrifice that saved the world at the climax of the series finale of "Buffy the Vampire Slayer," James Marsters' bleached-blond vampire martyr has been anticlimactically dragged back to the known Buffyverse, but in noncorporeal form.

Spike is there, in the offices of the evil multinational law firm Wolfram & Hart, but not all there. He walks through walls and desks, and can't throw a punch that connects to anyone's chin. Since he first arrived in Sunnydale, he's gone from a nasty villain to a neutered monster with a government-installed brain chip that prevented him from hurting human beings to a lovelorn semi-reformed Scooby Gang member to a conscience-ridden vampire with a soul to a resurrected immaterial phantom. No wonder he's so cranky.

A not-quite Spike fits in all too well with the "Angel" crowd. Joss Whedon's second-banana series has been struggling for years to match the appeal of "Buffy." Its supporting characters are too often pale shadows of those in the first show -- Fred is the poor man's Willow, Wesley the poor man's Giles. And when the series does score a success in this key area -- with Andy Hallett's fabulous green-skinned lounge lizard, Lorne -- it's not entirely sure what to do about it, swinging back and forth between overworking a good thing and neglecting it.

Plus, can we talk about Gunn, please? News flash, everyone: He's black. Race has never been a subject well tackled by Mutant Enemy, the company that produces both shows, and the mystery is why. Gunn's situation -- a black man who left the community he grew up in and defended with his life to fight the "bigger" good fight with a handful of white folks -- just naturally generates the kind of internal quandaries that make Whedon's characters' travails so fascinating. Doesn't Gunn ever feel a twinge of homesickness, of identity confusion, of racial alienation? The new season's idea of implanting him with a comprehensive knowledge of the law is amusing, but does he have to be such an Oreo?

The good news is that so far Season 5 of "Angel" snaps, crackles and pops, reinvigorated no doubt by an undiluted injection of Whedon's attention. The jokes are terrific. The infinite deviousness suggested by Wolfram & Hart's handover of its Los Angeles branch to our heroes is, like everything else about a demonic law firm, delicious to contemplate. And as for Spike, well, some of us had grown tired of his tortured-romantic mode. Sure, we sympathized with his doomed passion for Buffy at first, but he became too much that dire cliché of deluded femininity, the bad boy redeemed by his love for a good woman. (This is the same pipe dream that results in serial killers like Richard "Night Stalker" Ramirez receiving bushels of scented love letters in prison.)

My favorite Spike period came in Season 4 of "Buffy," post-chip but before he fell for Buffy, when he served as a scabrous peanut gallery to the Scooby Gang's adventures, firing off sharp, nasty and well-aimed darts at the do-gooders. Spike's greatest strength is his ability to read people; he knows exactly how to locate the valves that let out the other characters' overstocked righteousness and hot air.

Some of the funniest episodes of "Buffy" feature him playing Oscar to Giles' Felix, grossing out his roommate by eating Weetabix with blood and watching trashy soaps. Who can forget him smirking evilly while tied to a chair with about 50 yards of heavy rope, at the table where Buffy managed to serve a traditional Thanksgiving dinner by sheer force of will? Those were the days when the notion of Buffy and Spike together -- all kissy-face and announcing their "engagement" under the influence of a wayward spell -- was absolutely hysterical.

Spike's more or less back to that heckling role in "Angel," and much the better for it. The ghost thing (only he's not actually a real ghost, according to some gizmo of Fred's -- a spectrometer?) might get old fast, but I could listen to him taunt Angel all the livelong day. (The only thing better was a brief enchantment last week that compelled Spike to think positive: "That's one bitchin' big suit!" he enthused inanely to a monster terrorizing a Wolfram & Hart Halloween party.) It's not Xander or Willow or -- heaven forbid -- the slayer herself, but it'll have to do until the real thing comes along.