CD sales have rebounded ever since the music biz started suing file-sharers. The industry is convinced there's a connection. 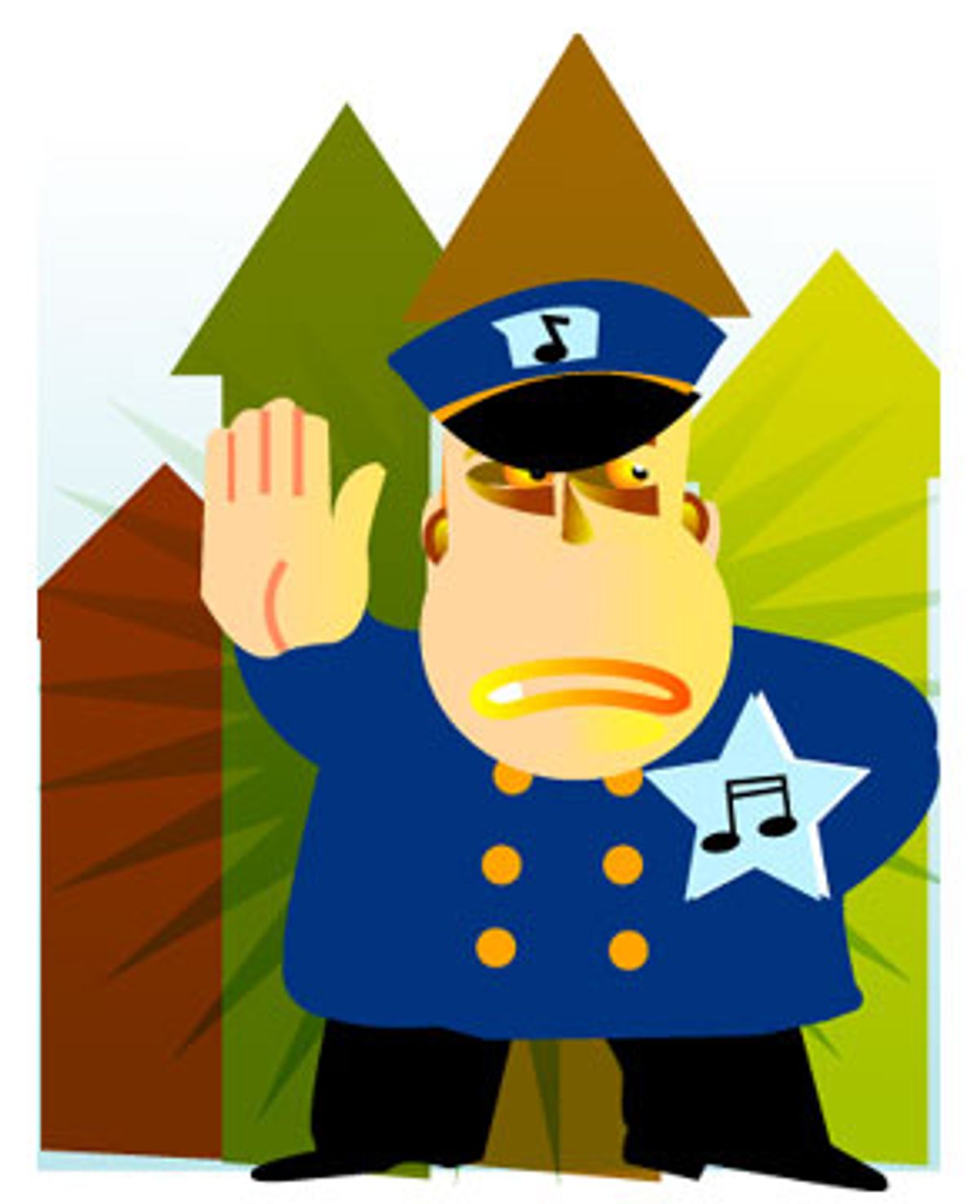 In early September the major music record companies, desperate to stop a prolonged downturn in CD sales, took the drastic action of suing 261 of their own customers for illegally downloading thousands of songs off the Internet. Critics in the press and the online community mocked the move, suggesting the stuck-in-the-past industry had hit a new low. Some even predicted that rather than solving the problem the lawsuits would ignite a consumer backlash that would end up driving down sales even further.

Two months later the industry is quietly basking in a rare CD sales boom. Thanks to a run of seven consecutive up weeks in which album sales have increased compared to corresponding weeks in 2002, business is suddenly surging. The sales uptick comes as welcome relief to executives who have watched over-the-counter business plunge for three years straight while the industry has shed tens of thousands of jobs.

Just as there is no direct evidence proving that file-sharing led to the industry's sales decreases, there is also no proof that the lawsuits have spurred file-sharers to mend their piracy ways and head to the stores. There are a variety of factors that, taken together, could explain the rise in sales, including cheaper CDs, simultaneous release of superstar albums and the debut of Apple's iTunes, which allows consumer to download singles legally, and may be driving fans into record stores to buy entire albums.

Still, the coincidental timing of the sales boom, immediately after the lawsuits were filed, is raising eyebrows in the industry, and is sure to offer support to those who want to continue to bring legal pressure to bear on individual music consumers.

Since 2000, CD sales have skidded 15 percent, according to Nielsen Soundscan, which monitors sales. Worse, revenues during that span were down 30 percent, says the Recording Industry Association of America. The sales reversal has been particularly shocking considering that since CDs arrived in the marketplace during the mid-'80s, sales had never fallen in back-to-back years. Prior to the recent autumn sales surge, business year-to-date for 2003 was down 8.5 percent. In just over a month that gap has been cut to 6.2 percent. During one gigantic seven-day period in late September, U.S. album sales shot up 16 percent over the corresponding week in 2002.

The lingering question on the minds of many is whether the RIAA lawsuits, and the avalanche of press attention they received, worked as planned. In other words, did the legal action instill fear in enough consumers to convince them to give up illegal downloading and return to the record shops and pay for CDs, just like the old days? Or at least convince them to sign up for legitimate online music subscription services, such as Apple's iTunes Music Store, MusicMatch, eMusic and the relaunched, no-longer-free Napster?

"It's certainly possible that people who a few months ago would have said, 'I can get this for free online,' are now paying for CDs," notes Josh Bernoff, an analyst for Forrester Research.

"If the lawsuits turned people off from stealing music and prompted them to buy music legally, then that was a gain for the industry," adds Geoff Mayfield, director of charts for Billboard magazine. "We just don't know yet."

Wendy Seltzer, staff attorney at the Electronic Frontier Foundation, which offers legal aid to people targeted in RIAA suits, dismisses any connection between the lawsuits and the sales rebound. "There's far too little data to draw any conclusion. There are all sorts of other explanations that can be offered up to explain the [sales] increase, such as the economy taking an upturn."

Still, there are some telling indicators that suggest that rather than alienating consumers, the much-derided lawsuits may have inspired them to buy more CDs. The most obvious link is the timing between the filing of the suits and the beginning of the sales increase. The RIAA went to court on Sept. 8; the very next week the CD business began its rebound. Previously, the comatose industry hadn't posted a seven-day sales increase in 105 weeks, since just prior to Sept. 11, 2001.

There's also anecdotal evidence that consumers are having second thoughts about illicit file-sharing. Last week, in an exchange that's been repeated often in recent weeks, the Philadelphia Inquirer interviewed an engineer who used the old Napster to download 2,000 songs. In the wake of the RIAA lawsuits, his illegal file-sharing activity is way down. "The risk," he said, "isn't worth it."

On the flip side, file-sharing activity on the leading peer-to-peer music-trading network Kazaa is up this year. According to BigChampagne, a company that tracks file-sharing, last year on average 2.5 million people worldwide at any given moment were logged on to Kazaa. Today, that number has ballooned to 4 million.

So does that mean the RIAA lawsuits had no impact? Not necessarily, says BigChampagne's CEO Eric Garland. He says of course Kazaa's numbers are up, since "file-sharing is not a static activity; it's been snowballing for three years now." The question is, "Would Kazaa's trajectory this fall have been more aggressive without the threat of litigation?" In other words, is file-sharing activity up less than it would have been if the RIAA had done nothing?

"That's a great question that cannot be answered," says Don Van Cleve, president of the Coalition of Independent Music Stores, who reports that after suffering through some of their worst years ever, several member stores are now reporting robust sales again.

The debate about what effect file-sharing is having on CD sales has raged for years. Today, most people in the music business assume that online piracy, and specifically the mainstream file-sharing revolution ushered in by the old Napster, triggered the unprecedented downturn in CD sales. But many in the tech and online community reject the correlation. Instead, they argue the CD recession was due to overpriced titles, weak product and a slumping economy. Some even suggest that file-sharing actually spurs sales, because music fans are exposed to new acts online, and if they like what they hear they'll go out and buy the better-sounding authorized disc.

"It's too early to say that lawsuits are responsible for the increased sales, but it's probably a factor," says Billboard's Mayfield. Other factors include the recent surge in consumer confidence and spending. Also driving foot traffic at record stores was the announcement by the industry's largest label, Universal Music, that it was slashing prices on its top releases across the board. The unprecedented move effectively cut the sticker price for new superstar CDs from $17 or $18 down to $14, and, at many discount outlets, as low as $9.99.

It's clear that Universal's price slashing has helped fuel business in recent weeks. But it's also worth noting that the move did not kick-start sales; Universal's cheaper CD prices didn't go into effect until nearly halfway through the seven-week sales boom.

The other key factor pushing sales is easier to explain: a bushel of hit records. Led by rappers (Outkast, Ludacris, DMX), rockers (Dave Matthews, John Mayer, A Perfect Circle) and crooners (Rod Stewart, Barbara Streisand, "American Idol's" Clay Aiken), a parade of marquee names has posted impressive numbers. "I think the onslaught of bigger, better new releases has everything to do with" the mini-sales boom, says indie retailer Van Cleve.

But again, it's not that simple. Since the industry does nearly twice as much business in the make-or-break fourth quarter as it does during any other, record company release schedules this time of year are always stacked with superstars. Last year was no different; Jay-Z, Shania Twain, and Eminem CDs all arrived on shelves early in the 2002 holiday shopping season. Yet as Mayfield at Billboard notes, year-to-date sales actually declined in last year's final quarter. What's different this year is the threat of legal action looming over file-swappers.

It should not come as a surprise that the 261 suits may have worked as a deterrent. Several recent surveys have made it plain that if file-sharers thought illicit downloading might lead to a stiff penalty, they would cease and desist. "We did a survey of young consumers online," says Bernoff. "We asked if fear of jail or fines would stop them from downloading, and 68 percent said yes." In the wake of the RIAA lawsuits, a majority of respondents told Newsweek's pollster the crackdown would make them less likely to continue swapping songs.

Despite the fresh CD sales rebound, nobody inside the music business thinks it has solved the file-sharing riddle. But industry executives may take comfort in the idea that at least some consumers can be scared straight.