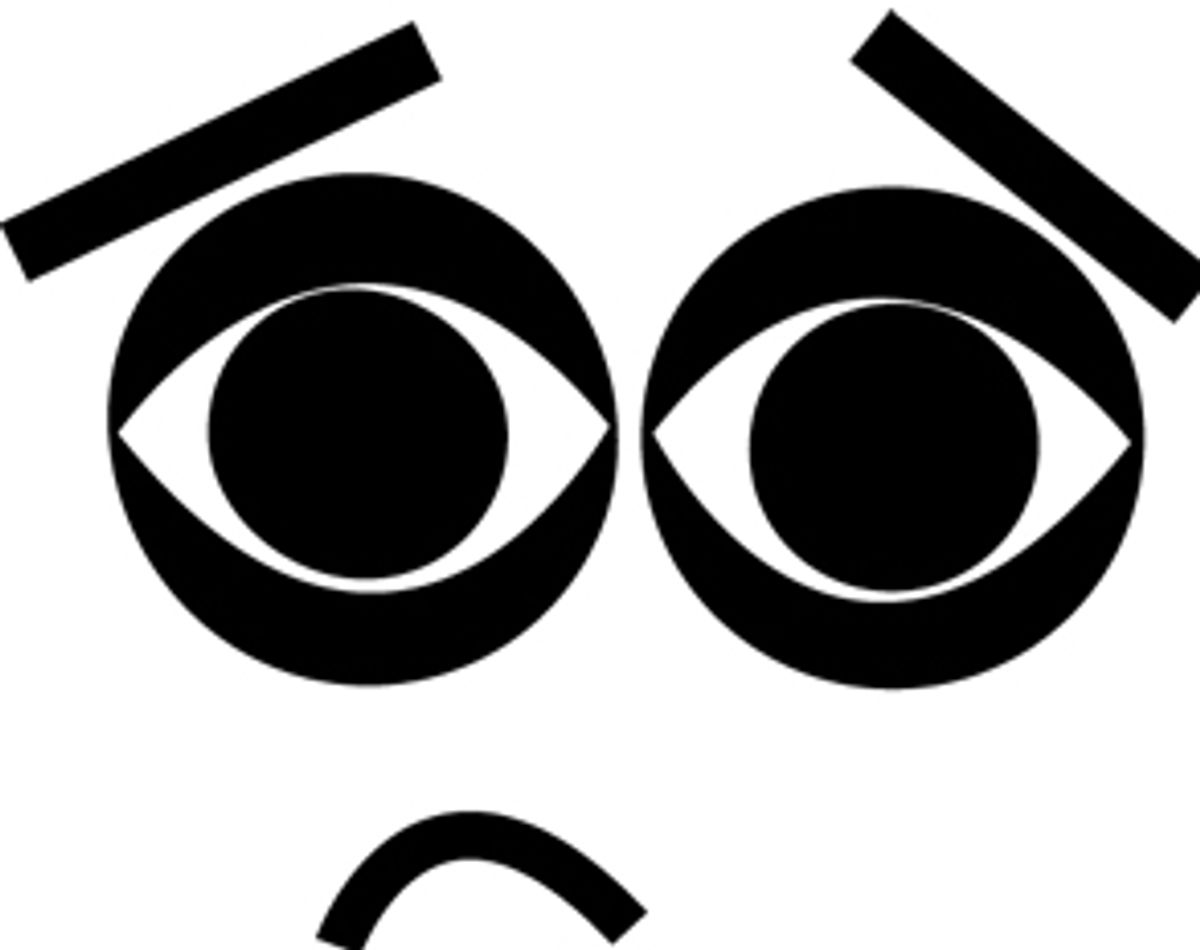 Anyone looking for signs of a return of 1980s-era culture wars probably couldn't dream up a better one. At the center of it -- again -- are the Reagans. Only this time, it's "The Reagans," a fictionalized biographical miniseries that was set to air on Nov. 16 and 18, but was dumped by CBS on Tuesday after heated political pressure from the right. And while it was immediately announced that the movie would eventually air "sometime in 2004" on Showtime (a cable channel also owned by CBS parent Viacom), its future still seems shaky, at best.

The decision came after weeks of debate -- fueled by the right-leaning Fox News Network and conservative watchdog group Media Research Center -- about the movie, which stars James Brolin as the former actor, California governor and president, and Judy Davis as his second wife, Nancy. The biopic reportedly focused on the couple's relationship, with special attention paid to Mrs. Reagan's controlling personality and astrological fixations.

Controversy about the project has centered largely around a line that screenwriter Elizabeth Egloff has said she invented, in which the fictionalized Reagan says of the growing AIDS epidemic, "They that live in sin shall die in sin."

CBS, in an effort to quell the rising controversy, had already agreed to make edits in the film, prompting director Robert Allan Ackerman to quit in protest. Now the network has passed the hot potato to its much smaller cable sister. The Showtime press release concluded with the line, "Showtime will collaborate with the filmmaker to create a final film that will be the kind of quality programming its subscribers have come to expect from the network," a statement that seems to leave open the possibility that even when aired, the film will be changed from its original, sure-to-be-campy and probably-sort-of-crappy format.

But television industry insiders, journalists and even politicians were not worried on Tuesday about the quality of "The Reagans." They were shocked by the unprecedented decision by CBS to give in to political pressure. The decision, many critics said, is even more alarming considering that CBS is a television network with an august history of creative risk-taking in the face of social and political pressure -- a history it celebrated on Sunday in a televised 75th anniversary bash.

"I think it is the lowest day in the history of CBS," said Neal Gabler, a senior fellow at the Lear Center for the Study of Entertainment at the University of Southern California. "If they didn't want to make this film to begin with, that's one thing. But to pull something off the air based on the protests of a minuscule number of people? They should have put this thing on once it was made come hell or high water."

But that "minuscule number of people" happens to have a lot of clout. Pundits on the right have been stirring up the faithful ever since reports of the script broke in the Oct. 21 New York Times. That night, Fox's "Hannity & Colmes" featured conservative talk show host -- and famous adopted son -- Michael Reagan who, after being egged on by host Sean Hannity ("You know, Michael, I love your dad, you know that"), blasted the movie, saying it "just proves the point that Hollywood has always hated Ronald Reagan." The same night, over on MSNBC, host Joe Scarborough darkly postulated that "CBS could never bring down Ronald Reagan when he was president. So now they're getting their revenge on one of our greatest presidents in his final days."

And they were just getting started.

The next night, Matt Drudge turned up on "Hannity" to make his own claims about the movie ("This is 'Mommy Dearest.' This is Nancy Reagan shown beating her kids, pill popping"), and suggesting that Brolin's wife, Barbra Streisand, orchestrated the AIDS slur on Reagan. "It doesn't help that Streisand's own son is suffering from HIV," Drudge said. (The HIV status of Jason Gould, Streisand's son with Elliot Gould, had been a rumor limited to gossip and tabloid reports -- until Fox and Drudge blasted it to millions.)

A few nights later, Hannity went to bizarre lengths to work the CBS controversy back into his show. During an interview with Ed Smart, the father of kidnap victim Elizabeth Smart, Hannity asked whether the family's close involvement in a made-for-TV movie about the kidnapping was due to the treatment of the Reagans: "Maybe you thought what happened in the case of the Reagans, that that would happen to you?" Hannity asked. Smart didn't seem to understand the reference and moved on.

Hannity's Fox stablemate Bill O'Reilly -- after featuring the controversy for the better part of a week on his show -- went on an extended tear Monday night after viewing what he called "a seven-minute highlight reel." "The dialogue between the Reagans makes Beavis and Butthead look like Ph.D.s." He also ominously predicted: "If CBS goes ahead with the film, I believe any company that sponsors it will take a huge hit, as will the network."

The success of the Fox-led crusade against CBS underlines the growing power of Rupert Murdoch's "fair and balanced" network. "It is quite unprecedented that a major network got browbeaten out of presenting a programmed story about a president of the United States," said Rep. John Dingell, Democrat of Michigan, who posted an open letter to CBS president Les Moonves on his Web site arguing for the airing of "The Reagans." "I think this is a new experience for the country."

Jeff Wald, a spokesman for James Brolin, said he blamed the "far right wing" for the cancellation of the show. "I feel bad for CBS, after their big anniversary special," said Wald. "Les Moonves is an inherently good man, but the pressure put on them by the right wing was pretty tough."

Wald insisted that Streisand was not the mastermind behind the Reagan drama. "Barbra Streisand had nothing to do with the production of the movie," he said. "The politics of the movie were never discussed with her. She visited the set once to see her husband."

Some critics of CBS's decision pointed to the irony that just this week, on their 75th anniversary special, the network had issued a very belated mea culpa to the Smothers Brothers comedy team, whose show was taken off the air in 1969 because of the brothers' satirical barbs against President Nixon and the Vietnam War.

"I'm glad to know that CBS now realizes what a mistake it made by canceling the Smothers Brothers in the early '70s," said Columbia University journalism professor Stephen Silverman. "There is great irony here -- that they are celebrating themselves when they've just done something that's disgraceful."

James H. Rosenfield, who was president of the network from 1977-81 and executive vice president of the CBS Broadcast Group from 1981-85, expressed surprise over his former network's decision, because in the past CBS "never ever, ever knuckled under to any kind of political pressure under any circumstances." Rosenfield (who is a Salon board member) said he was puzzled by the timing of the decision, "because that script had to be vetted before it got to this point."

Rosenfield's tenure at CBS coincided with some of the TV industry's most socially turbulent times. He recalled working in the network's sales division when the first episode of Norman Lear's "All in the Family" was about to air without a single advertiser.

"I couldn't give it away," he said of the program, which addressed issues of race, class and plain old human vulgarity with more frankness than had ever been seen on television and has rarely been seen since.

"Most of the problems we had were social," said Rosenfield of the controversies he was asked to manage. He mentioned "M.A.S.H.," a show about the Korean War that touched political nerves by chronicling the harsh reality of combat during the Vietnam debacle, and "Maude," which featured television's first abortion, as moments when CBS faced extreme criticism from political and religious groups.

Then, recalled Rosenfield, there was the outcry from Jewish organizations over the casting of vocal Palestinian supporter Vanessa Redgrave as a concentration camp prisoner in 1980's television film "Playing for Time."

"There was just tremendous pressure," remembered Rosenfield. "But then of course it played and the pressure was immediately relieved because she did such a tremendous job."

Writer Larry Gelbart, another veteran of CBS's golden age, had a more hard-bitten response to CBS's dive on "The Reagans": "My reaction was disgust that I wasn't shocked." Gelbart brought "M.A.S.H." to CBS, where it aired for 11 years; his relationship with the network extends back to 1944, when he wrote for the "Maxwell House Coffee Times" radio show starring Fanny Bryce as Baby Snooks.

Gelbart had warm memories of his own political past with CBS, particularly on "M.A.S.H." "The case that I made was that if Walter Cronkite could be against the war on the news at 6, then why couldn't we at 8 or 8:30?" he recalled. "And CBS was very, very brave. They were politically permissive. They encouraged us and they were not afraid."

Gelbart credited CBS's legendary mogul William Paley, as well as its president Frank Stanton and news chief Edward R. Murrow, with creating a network that did not flinch from controversy. "This was the network and Edward R. Murrow was the man who brought McCarthy down," said Gelbart. "CBS stepped up."

The difference today, according to these sources, is that the political parties are so busy chewing each other's faces off that the networks are worried about getting in the way. "Clearly, CBS is concerned about financial retribution and maybe worse," says Gelbart. "Maybe legislation. Maybe just being hit back [by the right]."

Rep. Dingell said that he wrote his open letter to CBS's Moonves because he believes that people deserve to hear the truth about President Reagan's years in office. Dingell, a congressman since 1955, remembered that truth as encompassing, among other things, "ketchup as a vegetable," the Iran-Contra affair, voodoo economics, Oliver North, the savings and loan fiasco, and farm bankruptcies. "If they can come up with something good that can be said about him, then by all means they should say that too," Dingell said. "All I want to do is see to it that the media is allowed to function in a free, responsible, decent and truthful fashion."

Dingell said that he could "name at least two networks where they lean actively to the right and do so without any shame or sense of concern." The congressman said he was referring to Fox and "perhaps MSNBC."

Though he hasn't seen it, Gabler, who wrote "Life the Movie: How Entertainment Conquered Reality," speculates that "The Reagans" is "a lousy movie. But that is immaterial."

The bigger issue, says Gabler, is cultural censorship. "In a free society what we generally do is we allow people to put things on the air that we may even find offensive and then we let people discuss and debate. And if we believe the historical record needs to be corrected, we correct it."