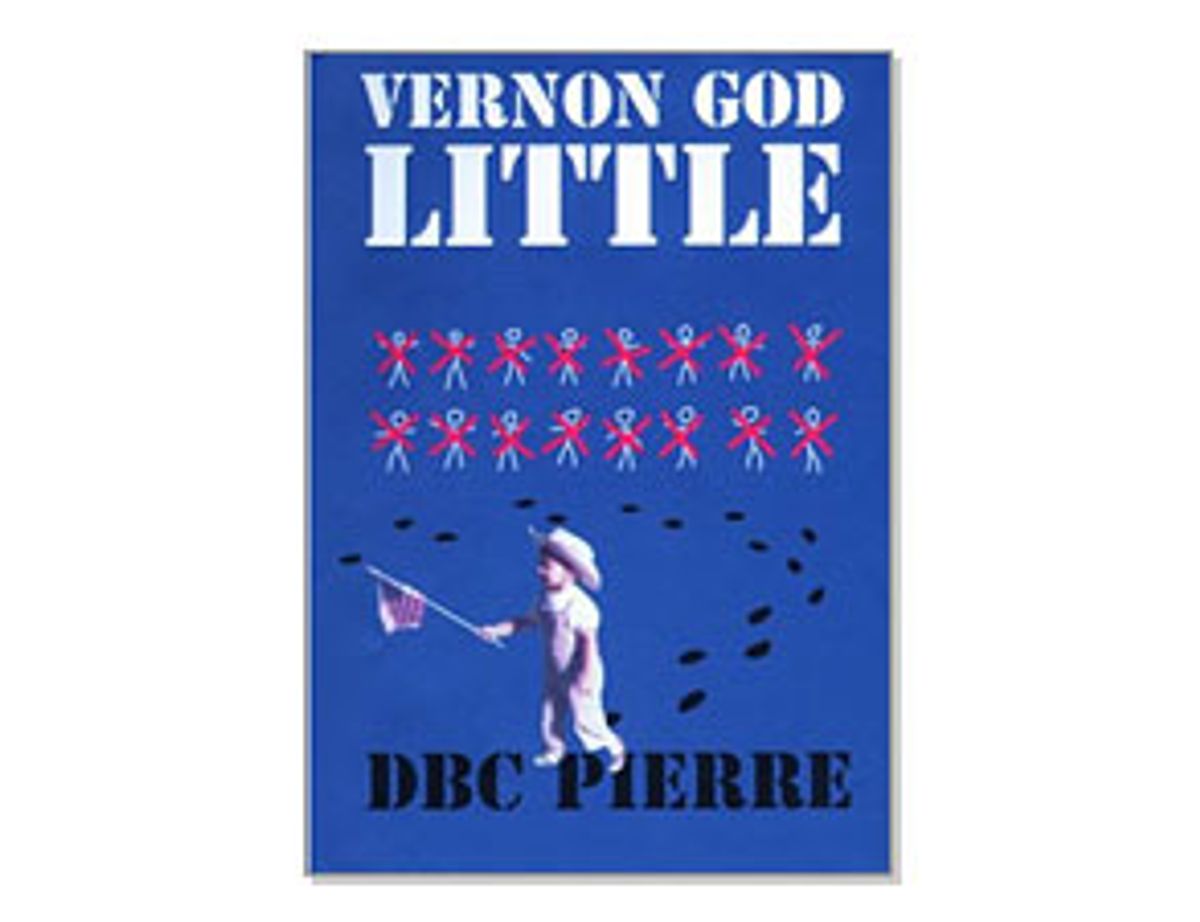 Two words for any artist, American or not, who wants to snag a prestigious award from foreigners: school shootings. Gus Van Sant's turgid Columbine-inspired "Elephant" won the Palme d'Or at Cannes in May, and last month first-time novelist DBC Pierre received the Man Booker Prize, England's most prestigious literary honor, for "Vernon God Little," the story of a 15-year-old Texas boy falsely accused of complicity in a massacre at his high school. That second event had American book editors (who had unanimously passed on the manuscript, which was published by the small Scottish house Canongate Books) and book review editors (who had decided to give the novel minor coverage at most) scrambling to account for their supposed lapse in judgment. Even Publishers Weekly, the trade magazine that runs reviews of forthcoming books -- and a notoriously soft touch -- dismissed "Vernon God Little" as "tiresome" and "unlikeable."

Some might enjoy what they imagine to be the spectacle of the literary establishment eating crow, but this was one case in which the system worked. "Vernon God Little" shows some promise, but it is not a good book. More important even than that, it's not a plausible book. One of the Man Booker judges, John Corey, describes the novel as "a coruscating black comedy reflecting our alarm and fascination with modern America." However well Pierre's work might reflect the "alarm and fascination" of Corey and his colleagues, what it doesn't reflect with any authority is America itself. It's a synthetic concoction of artificial flavors and colors, about as authentic a representation of American life as cherry soda is of the fresh fruit.

Admittedly, protesting the portrait of America in "Vernon God Little" is like objecting when an outsider mocks a family member for flaws we've criticized ourselves. "Vernon God Little" depicts its American characters either as fat, media-struck sheep obsessed with cheap sentiment and the acquisition of large durable goods or as ruthless, hypocritical hustlers. Americans have also been known to lament the physical unfitness, venality and gullibility of our fellow citizens. It's true that there are too many guns out there and we're too quick to use them.

It's also true that some of the homegrown complaints about these issues aren't much more sophisticated than the cartoonish spitballs lobbed by Pierre. But at least they come from inside the culture, from people who have no choice but to wrestle with them every day of our lives because we live here. We send our kids to schools like Columbine, and we've gone to them ourselves. If school shootings arise from some particularly dark vein in American culture, only someone who actually understands America can trace it to its source.

DBC Pierre was born as Peter Finlay in Australia to British parents and was raised in Mexico, where he spent his adolescence; he now lives in Ireland. He's had a colorful life full of misadventures and substance abuse, which makes him catnip for profile writers. He's said to have spent some time in Texas, though apparently it didn't take. The British press has praised "Vernon God Little" for the skill with which Pierre reproduces an American voice. Right. About as spot-on as Dick Van Dyke's Cockney accent in the movie "Mary Poppins," old chap.

America is full of writers who don't have much to say for themselves, who can't tell a story or make an interesting point, but who nevertheless know how to sound like Americans. Sometimes, that's almost enough to carry them, those loping, rangy, mulishly prosaic cadences of American speech, first (and perhaps best) captured by Mark Twain. The American voice -- sort of Southern, sort of Western, a hybrid that, without being either one, manages to suggest both -- makes an ideal vehicle for both bald-faced overstatement and the insistent needling of pomposity and cant.

DBC Pierre isn't really capable of re-creating this voice. To make matters worse, he attempts a kind of Texan variation on the cranky teenage diction of J.D. Salinger's Holden Caulfield, possibly the single most distinctive and imitated voice in American fiction. "The Catcher in the Rye" is a sustained tour de force, perfectly pitched and controlled, for all that Holden himself flails around in that quintessentially teenage mix of false bluster, moral indignation and bruised sentiment. Nothing misleads inexperienced writers so grievously as a style that feels casual and improvised; they assume it's produced in the same spirit. In fact, to be convincing this kind of writing has to be exquisitely calibrated and polished with great discipline. Making it look easy is the hardest thing.

"Vernon God Little" doesn't sound American, it doesn't sound Texan, and it doesn't sound teenage. Pierre obviously intends it to, leading with a second paragraph that reads, "Now it's Friday at the sheriff's office. Feels like a Friday at school or something. School -- don't even fucken mention it ... I ain't in trouble, don't get me wrong." But by the second page there's a phrase like this: "her features huddle in the middle of her face," a line few 15-year-old Texans, especially one who'd say "ain't," could be expected to utter. (I'm not saying our youth aren't observant, just that it would come out more like "her eyes and nose and mouth were all bunched up in the middle of her face.")

Pierre can't seem to settle on what he's trying to do: reproduce American speech or wax poetic. A Celtic lilt keeps creeping into his prose, and it couldn't mix more queasily with his ersatz Southwestern twang. The swing in Vernon's first-person narration from adolescent inarticulateness to sub-Joycean rhapsody and back makes him seem like a case of multiple personality disorder. On one page, we have Vernon reporting, "I had a talk with the psychologist here, told him I didn't have any human qualities, like skills or anything," and on another, it's "Alpine forests we drive through, dodging humongous motorcoaches lit up like space shuttles, down to tropical places that give way to areas of rock and cactus, and empty noise on the radio."

Some of Vernon's troubles are deeply felt: His complicated relationship to his mother, for example, a mixture of impotent tenderness and scalding resentment, and the awkward hatching of his sexuality. Any teenage boy -- an Australian growing up in Mexico, say -- might suffer such travails. What's missing are the flagship concerns of an American adolescent: his peer group and pop music. Vernon cites the weirdest assortment of tunes: Glen Campbell, Christopher Cross, Hank Williams. Even when Pierre gets a touchstone right, something goes wrong. Fleeing his small hometown, Vernon thinks, "What I need is some Eminem, some angry poetry, but you can't buy that stuff in Martirio." Maybe not, but surely that wouldn't stop a kid practiced at downloading porn onto his computer? And it's hard to believe that someone pining for Eminem would also think fondly of the "sassy music" of Shania Twain.

Of course, what American teenagers care about most is each other; the hothouse psychodramas of the average high school take up a lot of mental space. Not for Vernon, though. He spends more time contemplating the skulduggery among his mother's competitive friends. This affords Pierre many opportunities to skewer middle-aged American women -- overweight, materialistic, mawkish, etc.; the usual array of cheap shots -- but that seems beside the point. Except for the vacuous blonde Vernon yearns for and the occasionally mentioned childhood friend, Jesus Navarro, who actually did shoot up the school, his schoolmates don't figure much in his thoughts.

This is particularly strange because school shooters specifically target their peers. Whatever noxious elements combine to create such tragedies, the social relations among high school students are high on the list of causes. But then, "Vernon God Little" isn't really about school shootings in any meaningful way. The massacre is affixed to the book like a sticker vouching for its import, the thing that purportedly transforms it from a minor Salingeresque coming-of-age story into a "coruscating black comedy reflecting our alarm and fascination with modern America." Similarly, the school-shooting premise of Van Sant's "Elephant" is mostly an excuse for long tracking shots of adolescent boys (an assortment as varied as a box of chocolates, and apparently just as luscious to the filmmaker).

Neither "Vernon God Little" nor "Elephant" makes a credible effort to dig up the roots of school shootings. Van Sant tosses in a few details culled from the lives of Columbine killers Dylan Klebold and Eric Harris -- the Hitler fixation, the video games, the alienation -- while Pierre makes his killer a bullied gay kid pushed past the brink by abusive adults. Both "explanations" come across as incidental. Even if you're inclined to attribute such slaughters to the unfortunate combination of banal grievances and easy access to lethal firearms, this hardly seems enough.

Nevertheless, the French are lapping it up and so, now, are the British. Simply including a school shooting in your book or movie, apparently, is enough to mark it as a thoughtful commentary on American society, whether or not you've actually bothered to think about it. This amounts to the same thing as writing off the Balkan conflicts to the unfathomable "ancient enmities" of "those people" and the Rwandan genocide to the age-old barbarism of African "tribal rivalries." Plenty of Americans have made such facile statements in the past and have been rightly called on the carpet for it. Gullibility, it turns out, knows no borders.