In Jon Favreau's irresistibly goofy Christmas comedy, Will Ferrell is raised by Santa's elves but must find his real family in Manhattan. 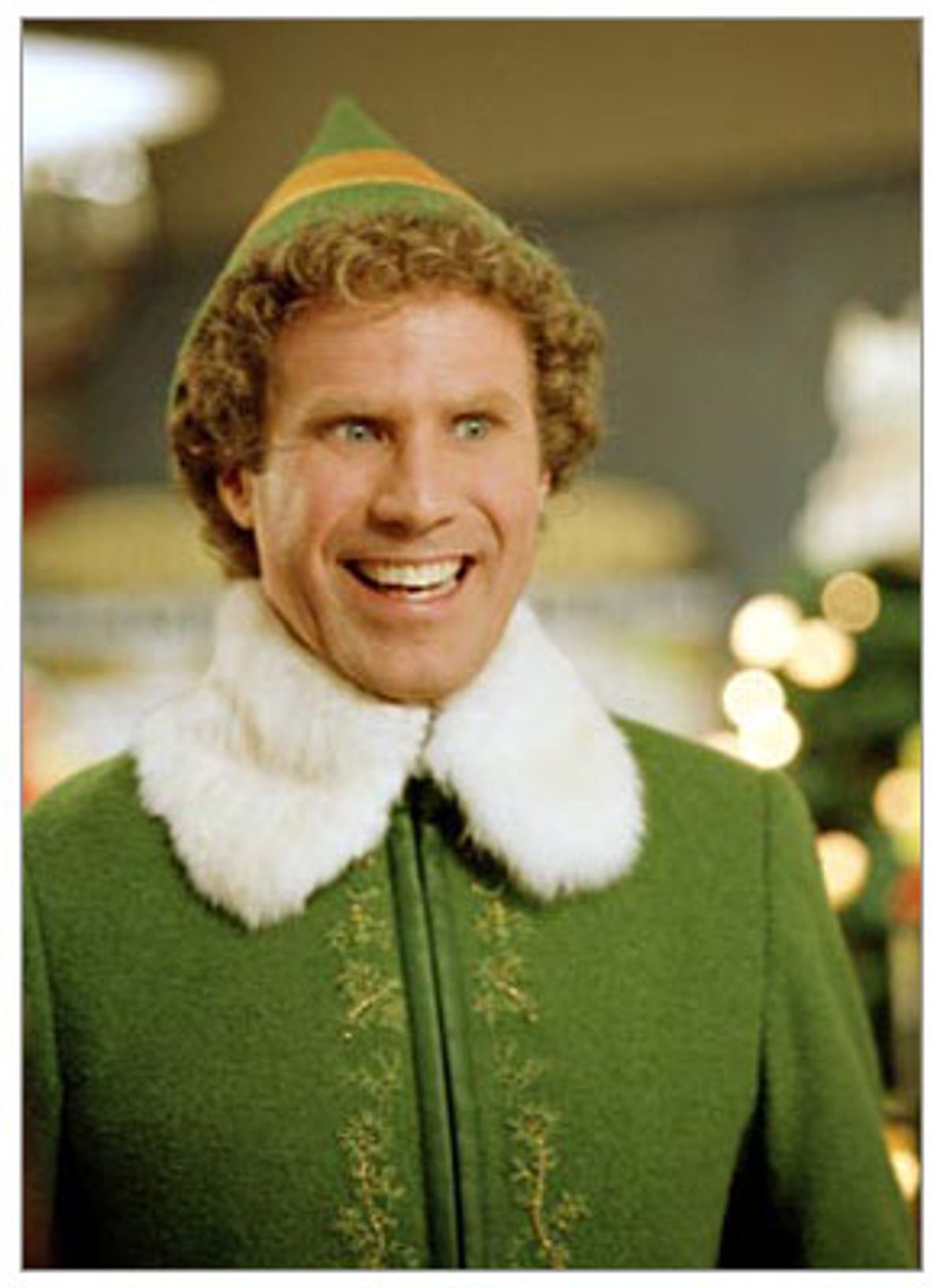 Few contemporary comedies have the courage of conviction that Jon Favreau's "Elf" does. In "Elf," Will Ferrell plays Buddy, a rather tall human orphan who has been raised at Santa's workshop, in the North Pole, to believe he's an elf -- forget that he has to fold himself in half to sit on an elf toilet seat and can't get through a doorway without bumping his head on an elf lintel.

It begins to dawn on Buddy that something's amiss when, at work on the Etch A Sketch assembly line with the other elves, he realizes that he's just no good at making toys. His adoptive father, Papa Elf (played by Bob Newhart), breaks the bad news: Buddy's real mom was very young when he was born (a fact that's telegraphed to us by the black-and-white photo Papa Elf holds up, of a pair of '60s folkie-student types with long hair and glowing, guileless expressions). She put him up for adoption and later died. Buddy's father is still alive -- he lives in New York and works, as all human beings in New York ought to work, in the Empire State Building -- although, as Ed Asner's Santa Claus warns Buddy, "He's on the naughty list." (He also happens to be played, with a very naughty degree of faux crabbiness, by James Caan.)

Still, an elf's gotta do what an elf's gotta do, and so Buddy steps, Rudolph-style, onto an ice floe and heads toward an uncertain future in which he'll unravel his past. Provided he doesn't get bumped off by a taxicab first.

"Elf" may sound like a comedy for children that grown-ups can enjoy too. But I think it's the other way around: Favreau doesn't work overtime to insert winking, nudging gags that will make the grown-ups laugh, the sort of thing that the highly overpraised "Shrek" was loaded with. Instead, Favreau ignores the fact that the premise of "Elf" is ridiculous, and the movie automatically slips into its own elegant, natural logic. "Elf" works because it's completely, refreshingly free of ironic detachment: When Favreau shows us those rosy-cheeked elves, tinkering away happily in their workshop, he gives it to us straight. Yes, they really are that happy. (A lesser director would show us a hidden bottle of hooch in an elf filing cabinet, the suggestion being that allegedly childish things have to be jazzed up for adult consumption.)

What's more, when you've got Newhart playing an elf dad with perfect seriousness, and Asner as a vaguely annoyed Santa (and the two of them are wonderful), there's no need for disingenuous in-jokes. Asner and Newhart are actors whose style and demeanor give them a certain recognizability. But whether you're hip to the history of their TV work or not, their personalities serve both the characters they play and the larger purpose of the movie. This is acting, not gimmickry.

Favreau gets the mood and tone and look of "Elf" just right. (It was shot by Greg Gardiner, and the production designer is Rusty Smith. The two of them know how to draw maximum energy from bright colors without allowing them to look garish -- visually as well as spiritually, "Elf" is the opposite of the 2000 "How the Grinch Stole Christmas.") The script, by David Berenbaum, is tight and lively and gives the actors plenty to work with.

Ferrell looks so right in his tights and silly embroidered cutaway coat that, when he shows up in a suit and tie and overcoat two-thirds of the way through the picture, the effect is jarring and wrong -- that's how much "Elf" acclimatizes us to its own willfully ridiculous universe. You don't usually think of Ferrell as having the face of an alien naif, but his demeanor in "Elf" is pleasantly gullible -- he somehow looks as if he's been smacked silly with a giant fish. When he discovers that a department-store Santa -- the store is recognizable as Macy's but it has been renamed, nostalgically, "Gimbels" -- isn't really Santa, he hisses, with elfish self-righteousness, "You sit on a throne of lies!"

Ferrell pulls off some marvelous physical stuff as well: Buddy negotiates his first-ever escalator by stretching his legs between the moving steps in a giant split. And he and his love interest, Jovie (played with great charm by zonked-out snow angel Zooey Deschanel), have a rapport that resembles the antics of gamboling kittens more than it does real-life dating -- which is precisely what makes it so much fun.

"Elf" moves along on swift little felt feet, stumbling just a bit in the last third: You feel that at certain points, Favreau wasn't quite sure how to shape the material. There's a sequence in which a hotheaded, arrogant children's book writer (played with surly relish by Peter Dinklage), who happens to be a dwarf, beats the heck out of Buddy, who has, of course, mistaken him for a fellow "little person." The sequence has a rough-and-tumble "Three Stooges" quality that doesn't suit the movie as perfectly as it might.

The picture's climax, too, feels a bit misshapen, as if the story needed to be wrapped up fast and big and no one was quite sure how to do it. But the more I've thought about "Elf" in the days since I've seen it, the more its minor flaws recede and the more its casual brilliance steps to the forefront. What really resonates are things like Favreau's choice of music, and the way he uses it to enhance what we're seeing on-screen, as opposed to attempting to clobber us into a heightened state of feeling. (When Buddy first arrives in Manhattan, his exploration of this strange and enormous new village is set to Louis Prima's "Pennies From Heaven." And Deschanel -- who, incidentally, can really sing -- and Ferrell get a lovely, tossed-off duet on "Baby, It's Cold Outside.")

Then there's the way Buddy explains to anyone who'll listen how he made his way to Manhattan: "Then I crossed the Sea of Swirly, Twirly Gumdrops. And then I walked through the Lincoln Tunnel." Or the way, once he's gotten there, he locates the Empire State Building: Papa Elf has given him a snow globe encasing a miniature New York skyline, and when he reaches the corner of 34th Street and Fifth Avenue, he holds the globe aloft and compares its miniature scenery with the real-life edifice in front of him.

It's a stunningly simple visual trick, and a lovely one. And it's just one more bit of proof that "Elf" is a movie made by people who really have their thinking caps on. As Newhart's Papa Elf explains in the movie's opening, there are three main jobs for elves: Making shoes in the middle of the night, baking cookies inside a hollow tree and -- the most prestigious gig of all -- building toys in Santa's workshop. But how many human beings among us are capable of making a comedy with wit and intelligence that also takes bold pleasure in unabashed silliness? I think this is what happens when you let an elf loose with a movie camera.