In front of a Whole Foods grocery store in San Francisco, environmentalists and fishermen agree: Salmon raised on fish farms are pallid, polluting affronts to nature! 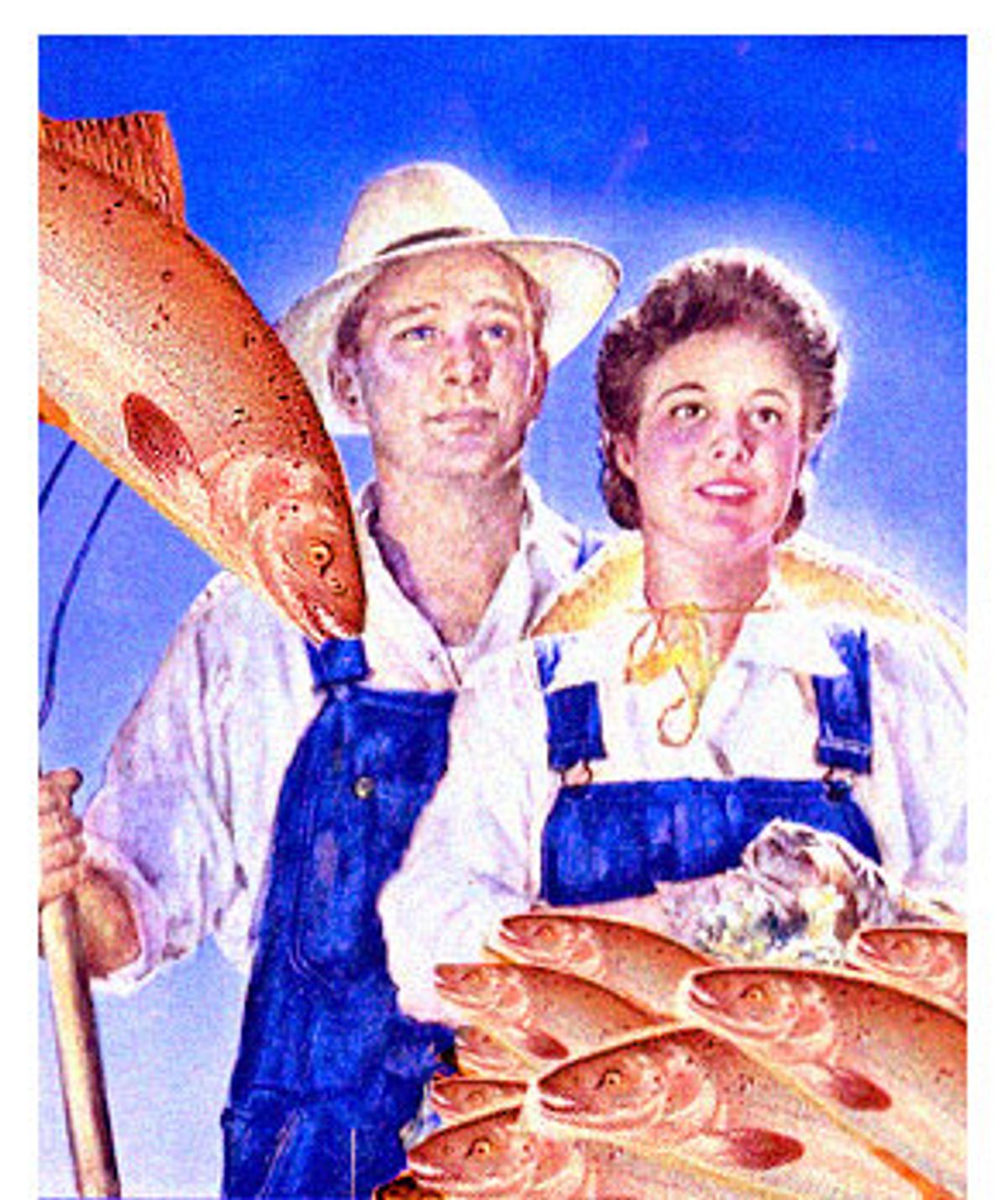 With so much to protest these days, who will speak for the fish?

At 11 a.m. on a drizzly, overcast Wednesday morning, Jonah Blumstein, 27, and a choir of a half-dozen developmentally disabled adults whom he teaches at Clausen House in Oakland, Calif., sang for the salmon.

In front of Whole Foods Market in San Francisco, at the corner of California and Franklin streets in Pacific Heights, Blumstein strummed along on the guitar, serenading the passing rivers of traffic, migrating FedEx trucks and BMWs. He started out with a solo number called "Real Color," a folk protest song he'd written just last week for this occasion:

A gigantic 12-foot-long salmon, made out of silver insulation, bobbed along to the tune, under the semi-control of the stilt-walker wearing it. A posse of about 15 other protesters lined the sidewalk, waving green and aqua banners suggesting "Think twice about eating farmed salmon" and, more directly -- "Farmed salmon: Don't you think it's kind of gross?"

The true color of wild salmon in the ocean -- ranging from pink to red -- comes from the fish's carnivorous diet of krill and shrimp. But since salmon farmers keep costs down by feeding their stock cheaper fish meal, producing salmon with grayish flesh, some grocery stores have been known to sell dyed fish to fit consumer expectations of what salmon should look like.

The iniquitousness of dying farmed salmon to make it look more palatable on the plate is just one of the charges being leveled at the aquaculture industry by the protesters, who pass out leaflets to shoppers and drivers with this headline: "Farmed salmon are fed antibiotics, colorants and pesticides. Bon appetit."

But the fishmongers at Whole Foods, the kind of grocery store where the toilet paper is 100-percent recycled and soy protein powder is sold by the coffee can, aren't taking these rhetorical barbs lying down. They had their own leaflet handy to pass out to any customers who now aren't sure what to make of the pink salmon glistening seductively behind the fish counter: $14.99 a pound for the wild king salmon fillet, $8.99 a pound for the farmed "Black Pearl/Natural Choice" salmon.

The flier brags about the store's wild-caught salmon, "certified by the Marine Stewardship Council," but adds that "to meet the ever-increasing demand for it, in addition to wild varieties, we also carry farm-raised salmon from producers who are committed to making advances in technology and minimizing environmental impact." Then, it assures shoppers that the farmed salmon sold here is chemical-, antibiotic- and dye-free.

"Nobody wants to overfish the oceans so our kids have no fish to eat," says John Dugery, the grocery store's seafood team leader, who argues that Whole Foods is part of the solution to finding "sustainable" sources of fish, by offering farmed fish from the more environmentally sensitive fish farms. He shows off a slab of farmed salmon: "That stuff is, like, cutting edge." As for the protesters: "They target us because they know our customers are environmentally conscious."

Might the lady in the giant-salmon costume and the folksinger with his tale of pink-dye woe be better off making the case against farmed salmon in front of some big-box retailer where lower-grade, antibiotic-stoked, dyed salmon, dumped on the market from Chile, is sold for cut-rate prices?

Kate Dugas, consumer campaign coordinator for Living Oceans Society, one of the 10 organizations making up the Coastal Alliance for Aquaculture Reform, which organized the protest outside, disagrees. She says that her organization has been trying to work with Whole Foods for a year, with no luck, urging them to pressure their suppliers to stop using open-net pens for salmon farming.

One of the environmentalists' most damning charges against salmon farmers is that by raising the large, carnivorous fish in close quarters, unfiltered, untreated salmon excrement pollutes the surrounding ocean water, destroying valuable coastal habitat for other fish and sea creatures.

"They're so confined that they're essentially stewing in their own feces," says Don Coleman, 42, from Berkeley, Calif., a volunteer from the nonprofit Friends of the River. Another good protest tactic: grossing out the would-be fish-buyer.

Activists charge that the close proximity of the farmed salmon to each other in their net pens also promotes disease: "Like little kids in a kindergarten, in such close quarters, if one of them gets sick they all do," says Dugas. She says that in British Columbia, wild salmon migrating by the salmon farms have become infected with sea lice, thus threatening the wild stock, which fishermen rely on. During storms, some of the farmed Atlantic salmon have also been known to escape from their pens, and interbreed with other species of Pacific salmon, a charge the aquaculture industry claims is overblown.

The Coastal Alliance for Aquaculture Reform, a coalition of 10 environmental, fishing-industry and native groups in British Columbia, organized the protest at Whole Foods, as well as similar actions in Los Angeles, Seattle and Vancouver at Whole Foods and Safeway stores there, as part of its "Farmed and Dangerous" campaign, which also included a recent full-page ad in the New York Times. Dugas explains that the Canadian campaigners are bringing their reform-salmon-farming message to the U.S. because 80 percent of the fish farmed in British Columbia is exported to this country, and much of that is sold to consumers in Washington, Oregon and California.

But among the protesters are a few characters who you wouldn't expect to find at this sort of placard-waving, San Francisco protest affair, revealing another side of the issue: fishermen who feel that they can't compete with fish farmers, and want their wild market protected.

Mike McCorkle, a commercial fisherman from Santa Barbara, Calif., who says that he's been fishing for salmon, shrimp and halibut there for 49 years, attended the protest because farmed salmon has been undercutting his catch. It's not often that you find fishermen, who are often under attack from environmental groups for alleged over-fishing, finding common cause with the would-be saviors of the oceans.

Five years ago, the market price McCorkle used to get for the salmon he caught was around $3 a pound. But since then it's fallen by half to $1.50, and at times even as low as a dollar. "At half of the market price, we can't make a living. California fisherman can't compete," he says.

But he thinks that the word about farmed salmon is getting out, since "this year the prices were a little better."