An overcrowded Anglo romantic comedy from the "Bridget's Four Notting Hill Weddings" guy leaves the actors, and the audience, no room to breathe. 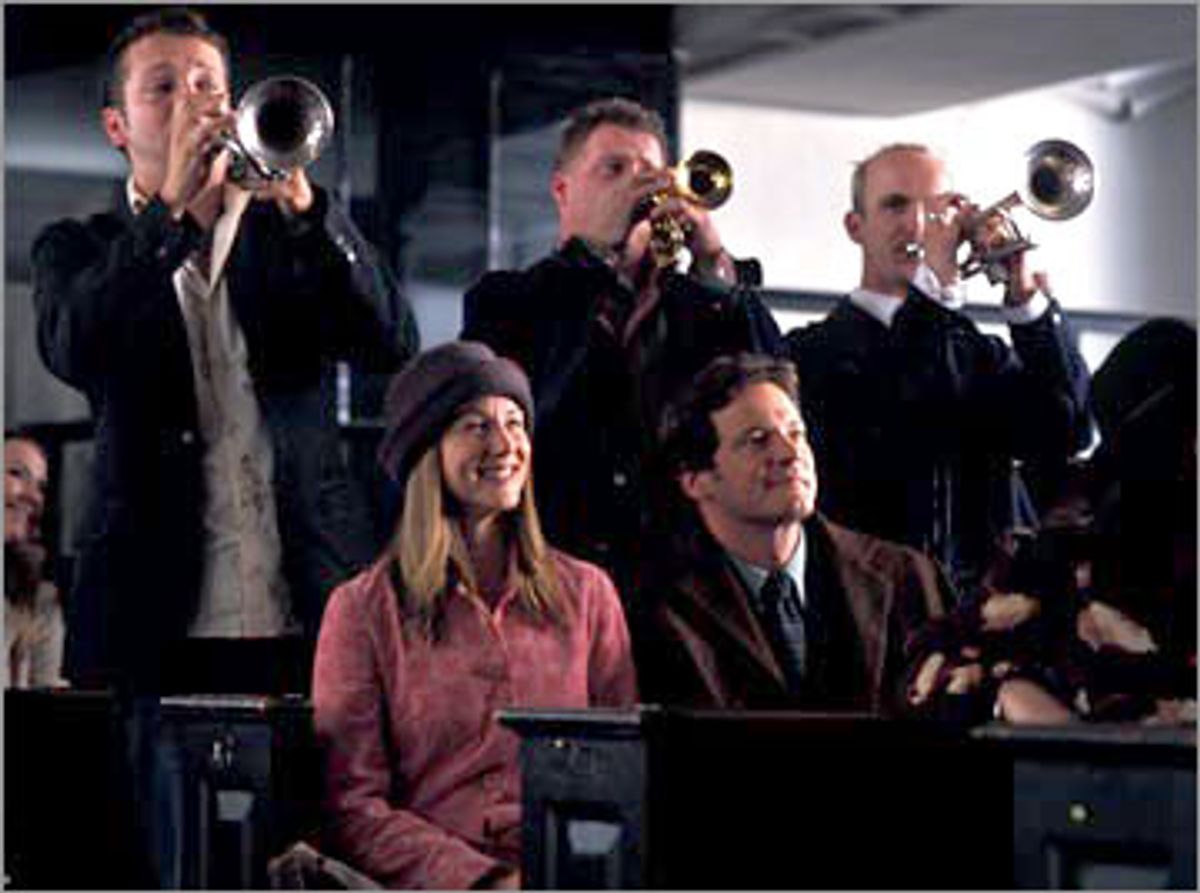 There are no fewer than nine interlocking and overlapping love stories in Richard Curtis' deadly epic sprawl of a romantic comedy, "Love Actually." By the end of the movie, that's nine too many. Colin Firth as an English writer romping through the French countryside with his Portuguese cleaning lady; Alan Rickman enjoying a flirtation with a seductive Leslie Caron-lookalike employee while wife Emma Thompson crumples discreetly in the background; Hugh Grant as the prime minister of Great Britain (perhaps the movie's single stroke of real genius) eyeing one of his aides, a luscious crumpet played by Martine McCutcheon, with sad-sack heartsickness because he's too principled to act on his feelings while she's in his employ.

This is the kind of flitting and flirting, coupling and uncoupling, that fills "Love Actually" until it can take no more. (Keira Knightley and Laura Linney are among the other actors tossed in there someplace.) Its cup runneth over and, at more than two hours, so does its runtime. Even so, Curtis has to scramble to tie up all the loose bits by the end, and not one of the romances ends with a satisfying click -- or even with a bland but realistically contented sigh.

What, exactly, does Curtis think he's doing? In "Love Actually," which is his directorial debut, he pushes so many buttons at once, just in case, that he's perpetually jamming the movie up. There's no doubt that audiences have high expectations for "Love Actually." Curtis wrote the 1994 whopper hit "Four Weddings and a Funeral," which made him king bee in the romantic-comedy universe. "Four Weddings" was transparently manipulative and wily in its smug, upper-middle-class hipness. Yet for all its sly calculation, the picture did at least manage to fake a breezy, casual feel. (It also featured Rowan Atkinson as a bumbling priest who invokes "the Father, Son and Holy Spigot" in his benediction, the kind of comic moment that can make you feel as if you've seen God.)

Since "Four Weddings," Curtis has written or co-written scripts for other movies (the lively "Bridget Jones's Diary"; the insincere, floppy "Notting Hill"). But "Love Actually" feels less like a movie and more like a patented product -- as if Curtis were hoping to style himself into a one-man empire along the lines of Thomas ("Painter of Light" [TM]) Kinkade.

Even if you've seen (and enjoyed) pictures like "Four Weddings" and "Notting Hill," you may not have been able to pinpoint anything you could call the Curtis touch. But "Love Actually" has giant, smudgy pawprints all over it. When one character dashes through Heathrow Airport, winging past guards and security barriers in pursuit of his one true love, expect the score (it's by Craig Armstrong) to become not just big but enormous -- it mauls you like a hungry bear. During the movie's obligatory funeral scene -- like "Four Weddings," "Love Actually" is a happy-sad patchwork of life's grand and bittersweet moments -- expect Curtis to attempt to squeeze real tears out of our well-lubed ducts as bereft husband Liam Neeson hoists his wife's coffin onto his shoulder. The Bay City Rollers' "Bye Bye Baby," apparently one of the deceased's favorite songs, soars in the background, proving that bad taste can reach from beyond the grave.

"Love Actually" may leave some people feeling invigorated, but it left me feeling milked and exhausted and more than a little angry. I would have hated "Love Actually" less if it had been a total, clumsy disaster; the problem is that Curtis does pull off some amazingly well-tuned moments, as well as some very funny ones. Firth's well-meaning attempts to court his beloved housekeeper (she's played by Lúcia Moniz) result in some hysterically funny pidgin-Portuguese. ("And I will inhabit here or you can inhabit with me in England.")

And one of the movie's couples consist of a young man and woman (Martin Freeman and Joanna Page) who are working as stand-ins for what is, apparently, a porn movie. The woman is asked to undress, and a technician steps in to wave a light meter around her exposed breasts. Her co-stand-in is bent over her from behind, doggy-style, and as the two of them make awkward chitchat (with the film crew buzzing around them all the while), you begin to see something like chemistry take shape between them. These characters don't have a big role in "Love Actually" -- they're just a minor connective element -- but the delicate, funny aura around them suggests that on some level, Curtis knows exactly what he's doing. Or he would if he'd only quiet down and listen to his instincts instead of being so fixated on big, crowd-pleasing moments.

Those moments include, but aren't limited to, a sequence in which Grant, who has recently been elected to office and who is just getting used to his big new house, does a ridiculous "Risky Business" style shimmy to the Pointer Sisters' "Jump." (The scene is marginally pleasurable because it's the roguish Grant we're watching -- but not even he can pull it off completely.) Emma Thompson has a stunning moment in which it dawns on her that her husband may no longer love her. She stands, silent and almost expressionless, alone in the couple's bedroom; Thompson is such a subtle actress that her heartbreak radiates from somewhere other than her face. But Curtis draws out the scene until its power is practically dissipated -- we can't wait to move on to the next quirky song choice or lathe-turned witticism.

If movie theaters had windows, I would have jumped out of one by the end of "Love Actually." But, as is so often the case with movies these days, it was the actors who made my confinement even remotely bearable: Grant has some terrifically funny, tossed-off moments -- he hits his stride effortlessly, as if he were appearing in a more relaxed movie than the one Curtis has actually made. And he has one fine scene in which he stands up to the president of the United States (a smirky Texan tyrant played by a mystery actor whose name I won't give away), a satisfying fantasy that plenty of Brits and Americans wish would be played out in real life.

But it's Bill Nighy, as a washed-up pop star making a bid for a second run, who's my real knight in shining armor. Nighy has already turned in several sound performances this year, in "I Capture the Castle" and "The Lawless Heart," not to mention "Underworld" (in which he plays a crumbly vampire resurrected from the dead-undead). In "Love Actually," he plays a guy who doesn't give a toss how he comes off, and his performance has the same loose, devilish insouciance. His character has returned to the spotlight by recording a cheesy Christmasized version of the Troggs' "Love Is All Around" -- and, yes, it's as horrible as it sounds. He makes an appearance on a "Top-of-the-Pops" type TV show, earnestly admonishing the kids in the audience not to buy drugs. He waits a beat; his eyes light up. "Become a pop star so they'll give them to you for free!" In another scene, he cuffs his manager affectionately and suggests, "Let's get pissed and watch porn!" -- only he pronounces the word like "prawn" without the "R," lending it a propriety that makes the line funnier than you'd think it could be.

Nighy doesn't hit a false note in "Love Actually," and whenever he's on screen, he distracts us from the otherwise merciless grinding of the movie's gears. I wouldn't come down so hard on Curtis as a director if he had no talent; the frustrating thing is that he seems to be squirting it in every direction, with no sense of focus or restraint. The unmissable message of "Love Actually" is that love is all around. But Curtis doesn't seem to realize that depriving it of room to breathe is the surest way of smothering it. He packs so much into "Love Actually" that he uses up all available oxygen. Next time he should leave some for the audience.