More war on the cheap

Using Marines as peacekeepers and mobilizing new Reserve troops spotlights the military's holes in Iraq -- as well as the White House's zeal to bring soldiers home in an election year. 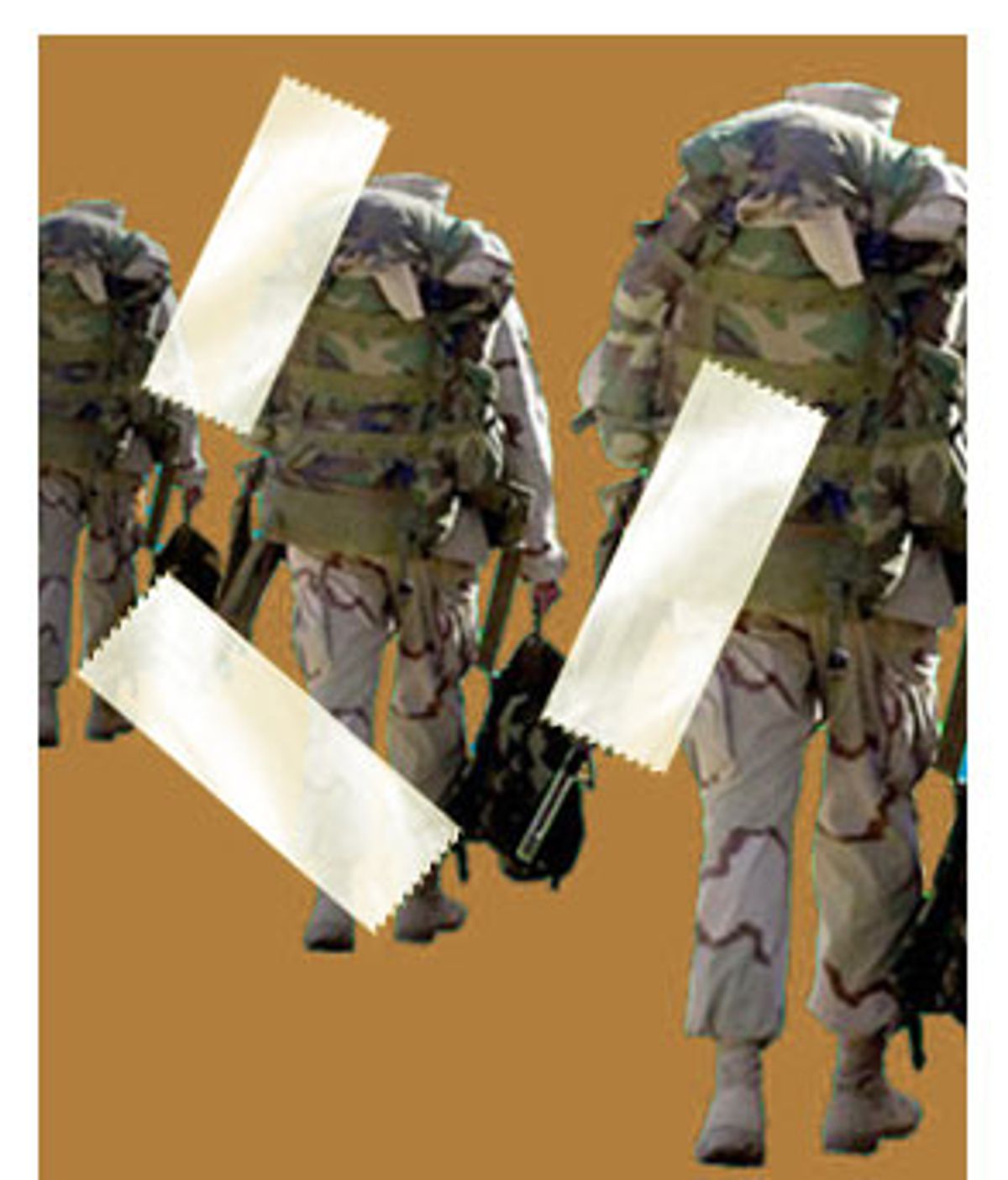 The Pentagon's decision to include 20,000 Marines and another 43,000 National Guard and Reserve soldiers in its new troop rotation plan only underscores how thinly stretched the military has become, experts say. It also illustrates the price the administration must pay for failing to line up international backing for the occupation of Iraq.

The same day as the troops announcement, President Bush described the Iraq war in his most grandiose terms yet, as the latest front in the "global democratic revolution" necessary to continue the "2,500-year-old story of democracy." That makes some wonder why the administration is determined to wage such a war "on the cheap," in the words of many critics.

"This administration refuses to treat this situation, which they created, seriously," says Gregory Urwin, who teaches military history at Temple University. "They're still trying to pay as small a price as possible and run this war on the cheap."

"I was surprised to hear about the Marines because they're not known as peacekeepers," adds military historian Michael Doubler. "An occupation is not on the Corps' normal list of responsibilities. They conduct shorter, offensive operations." The Marines played a central role in driving Saddam Hussein from power and securing Baghdad in the spring.

Doubler and others suggest the only reason Marines are now part of the mix is the Pentagon has essentially run out of options, and run out of Army soldiers, for Iraq. "The troop-rotation problem, it's increasingly obvious, is unsolvable," says Wayne Lee, a military expert and professor of history at the University of Louisville. "There are very few options, and that's why you can't avoid bringing the Marines back into it."

In July, when the Pentagon released its troop-rotation plan for 2004, the Marines were not part of it. Instead, the U.S. was hoping that an international coalition would send approximately 30,000 troops to help stabilize and rebuild Iraq, thereby relieving some of the pressure on the U.S. military. To date, the administration has not been able to secure most of the commitments from countries such as Turkey, South Korea and Pakistan.

"If they had come through we wouldn't have to pull in the Marines," notes Lee.

"This is Plan B," adds Jerry Cooper, a retired professor of military history at the University of Missouri. "And it's far different than what the Pentagon bargained for."

The Pentagon's plan, announced publicly on Thursday, calls for extensive use of Marines, National Guard and Reserve troops to serve in Iraq during 2004 for at least 12 months. In total, nearly 130,000 U.S. troops are destined for Iraq. Looking ahead, the plan is for the number of U.S. troops to be cut to approximately 100,000 next May. The Pentagon is hoping that in the coming months tens of thousands of trained Iraqi soldiers and policemen will increasingly be able to take over maintaining peace in the country. It's also clear that the administration would like to be able to commit to troop reduction in an election year.

Troop management has become an unusually heated issue during the war with Iraq and the postwar reconstruction. With a steady barrage of terrorist attacks inside Iraq, administration critics, including Sen. John McCain, R-Ariz., insist more troops are needed on the ground. But the only way to accomplish that would be to drastically expand the size of the Army, perhaps by as much as two full divisions. Secretary of Defense Donald Rumsfeld, determined to transform the Army into a leaner fighting unit, opposes the move. Still, even the current number of troops serving in Iraq is seriously straining the Army, forcing part-time National Guard soldiers and Reservists to increasingly fill in for professional soldiers.

So rather than asking Congress for more money to train more troops, critics say the administration is trying to tape together a troop-rotation plan that just doesn't hold.

"I find it quite strange that the Department of Defense continues to say we've got enough troops when they demonstrably do not," says Cooper. "They can say they do, but I don't know who believes them anymore."

Military experts point out that Marines have not been sent out in large numbers on a sustained peacekeeping mission in more than half a century. It's equally rare to have so many Guard soldiers and Reservists serving overseas for a year in a deadly environment which is not a full-fledged war.

For the Marine Corps, its Iraq deployment will be reminiscent of its turn-of-the-century responsibilities when it protected American interests in places like Panama, Haiti and Nicaragua. "For decades, from 1910 to 1933, they worked as nation-builders," says historian Cooper. "Then the Marines got away from that. They wanted to be real soldiers, not cops."

That institutional disdain for peacekeeping was one reason some Marines were grumbling this summer when, months after Saddam's fall, many of them were still serving in Baghdad. Now, 20,000 Marines are set to return to Iraq for a nation-building mission the likes of which the Corps has not undertaken in nearly 70 years. "I can't think of any place they've been sent for this kind of peacekeeping effort," says Cooper. (He suggests the Marines' ill-fated mission in Beirut 20 years ago, when 241 troops died after terrorists bombed the barracks, was something more than a nation-building effort, but any comparisons with Beirut are likely to be unsettling.)

"I'm sure some Marines are not thrilled," says Allan Millett, author of "Semper Fidelis: The History of the United States Marine Corps." "But they'll do their duty and they'll do a good job."