In the nanotech future, hunger may be a thing of the past, but there will always be a place for a good man with a knife. 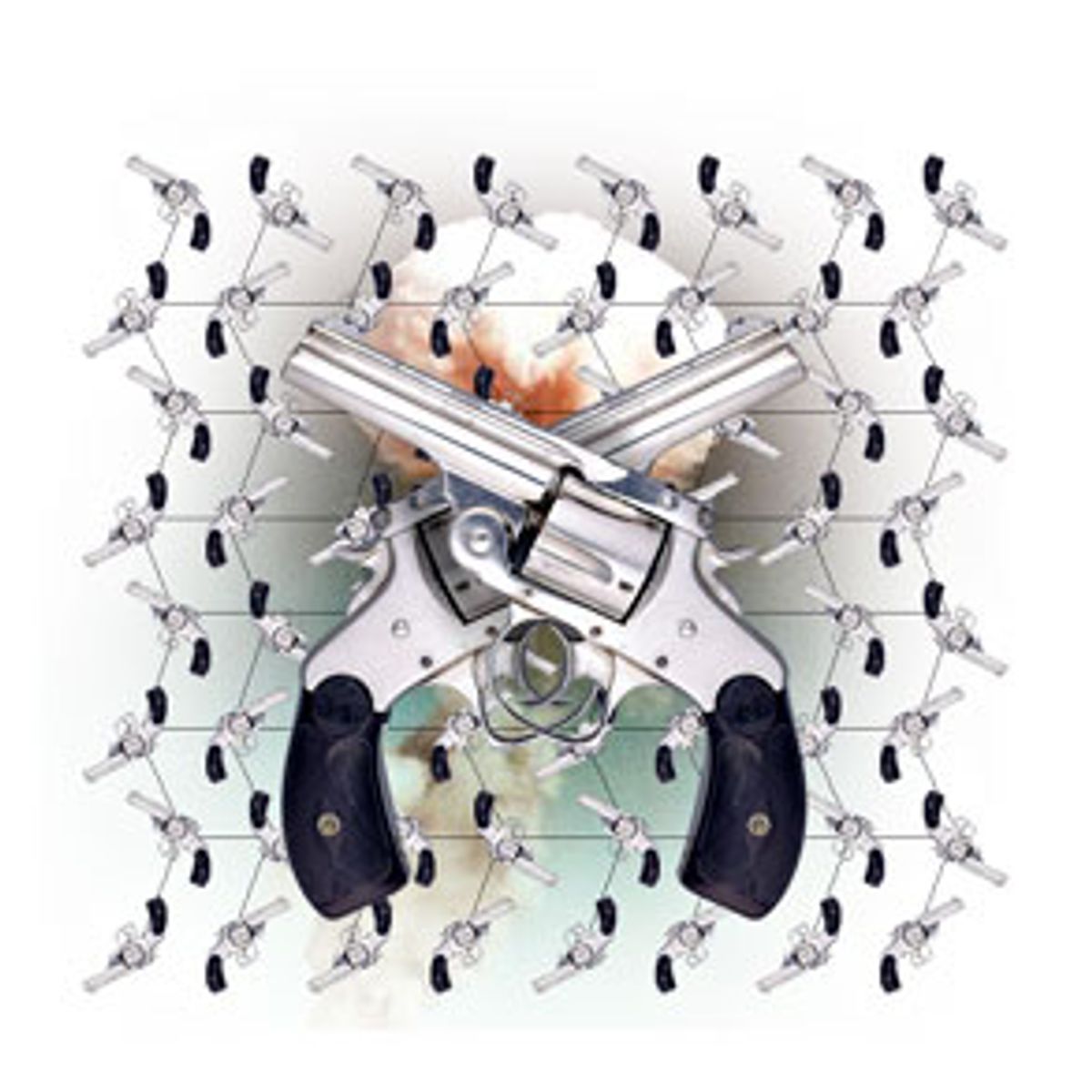 With two minutes left in the year 2037, Dr. Emmett Fairbairn took his antique black medical bag down from the high shelf in the study of his home in Arlington, Va. He set it on his desk, careful of the chessboard, and tugged open the stubborn catches. From inside he drew a .38-caliber Smith & Wesson revolver, not quite as ancient as the bag but still old. Fairbairn hefted the gun, studying it with the same focused regard he had once reserved for diseased hearts. He had considered several names for it over the past few days -- Extreme Unction, the Last Anesthetic, Kevorkian's Shortcut -- but none carried quite the weight, the moment he sought. Now, though, admiring the gun's obscenely black gleam, it came to him, as he had known it would.

"Strong Medicine," he said. "Good for what ails you."

An involuntary smirk creased his lips. A taste for black humor -- as much as a low handicap, a weakness for nurses, and an incipient god complex -- was one of the occupational hazards of three decades in the O.R., a necessary counterweight to fingers that coiled daily between human ribs. Fairbairn had gone through more ribs in his day than a Texas barbecue. He had touched more hearts than the pope, admired more inner beauty than a poet. In his day.

But that day was over, all praise nanomedicine.

Fairbairn cracked Strong Medicine's breech open wide. The cylinder's empty chambers stared at him like eye sockets in a skull. He drew five brass-bound bullets from the medical bag and began plugging them into the holes. Same as packing small wounds with gauze, or so he told himself. Shelly, Leiko, Rajani, Nadine -- he named each bullet off in turn, his fingers steady as he seated each one in the cylinder.

He rolled the fifth and final cartridge like a prayer bead between thumb and forefinger. "And Ellen," he said in sardonic salutation, slotting it home. "Should old acquaintance be forgot."

For most of his professional life, guns had been Emmett Fairbairn's natural enemy. But old enemies could become the strangest of allies in strange times, and these times were the strangest he'd seen.

He snapped shut the breech and gave the cylinder a solid spin. One chamber remained empty, but that was how he wanted this -- a nice little round of reverse Russian roulette, with the odds stacked high against him. If the universe wanted to keep him around, let it step in and tell him so.

One minute now to midnight. "Picture," he said, as calmly as if dictating orders to his surgical team. The holotank in the corner switched on, painting the wainscoted walls with a pearlescent glow. "Volume 5."

Wild cheering erupted in the study, rattling from hidden speakers. An ebullient Times Square crowd -- bundled in thick coats, many with arms upraised and waving -- filled the tank. A fine snow whirled and eddied in the capricious Manhattan wind like a memory of yesteryear's static. As the holocameras panned across the scene, a reporter said in a hoarse, sexy voice, "As you can see, the mood here is exuberant. It's as if New Yorkers are saying, yet again, fuck terrorism, fuck our security, we're rich and healthy and happy, so bring it on, we're gonna party like it's 1999."

Fairbairn grimaced. Not a person in America who didn't want to be was hungry any longer, not when nanogrow starter kits were as plentiful and shareable as yeast and all it really took to make a meal was a freeware recipe and some garbage or mulch of acceptable composition. Nanogens to target infection and nanocisors to cleanly atomize diseased tissue had been in limited use at Walter Reed a decade earlier, but Fairbairn had seen the writing on the wall even before 2035's open-source revolution had blown the economies of scarcity and infirmity wide open. While the pharmaceutical companies struggled to keep pace and tiny machines learned to do his job better and less traumatically than he ever could, Fairbairn tried to arrange a surgical fellowship somewhere in the Third World, it didn't matter where.

It wasn't that he felt any particular altruism. He simply lived to cut -- to part and repair flesh with warm steel, sutures and his own two hands, nothing more. He had known this since his first incision in medical school, honed his considerable talents in the emergency rooms of Baltimore, and come into his own as a conscripted captain in the field hospitals of Syria, Turkey and Saudi Arabia. Five tumultuous marriages had come and gone, but Fairbairn's devotion to the scalpel had never wavered. And if his talent wasn't needed in his homeland, then surely he could ply his trade in some more needy country. He would do it for free. It wasn't about money.

But just as his placement to Namibia was coming together, the U.S. sealed its borders, not only to shut out a new generation of terrorists but to shut in the technology that threatened to render their campaigns moot. The action was a bust on both counts -- a fresh bomb went off somewhere nearly every week, as often as not the work of radical domestic groups, and fresh strains of nanoware kept cropping up overseas -- but that didn't get Fairbairn any closer to an African hospital.

Desperate, he turned to old friends from the service. After a wait that seemed interminable but was only a couple of months, passage was arranged for a fee that devastated his savings. Fairbairn traveled to Eagle Pass, Texas, where he was to meet the first of the couriers who would conduct him across the Rio Grande, the equator, and the Atlantic. But the courier never materialized, leaving Fairbairn to speculate bitterly on the long autodrive home whether he'd been the victim of a scam or a government sweep.

To judge by the big black cars he kept spotting in the neighborhood, it might well have been the latter.

"Local coverage," said Fairbairn, and the view in the tank changed to the Washington Mall, a scant five miles away. The vast crowd paved the park like living cobblestones, an illusion that only vanished when the holocameras zoomed in on individual red-cheeked faces. Fairbairn settled back in the leather chair behind his desk, Strong Medicine gripped in his left hand -- his cutting hand -- like an unwieldy scalpel.

Fairbairn cocked Strong Medicine's hammer as the scene in the tank shifted to the sky above the Lincoln Memorial. He pressed the barrel into the soft flesh beneath his jaw, aiming straight up. As fireworks erupted over the Potomac, a brilliant display of crimson and white would explode from the top of his skull. Not all the king's horses nor all the king's meds could put all those pieces together again.

Idly Fairbairn wondered which ex-wife it would be that did the job.

The circle of the barrel was cold and reassuring against his jaw. His finger tensed on the trigger. On impulse, he reached out with his right hand and tipped over the black king on the chessboard.

The curtains drawn across the east-facing window of the study flashed translucent with a white light that immediately deepened to hellish orange. The picture in the holotank vanished, and the sound from the speakers deteriorated into an empty and deafening shriek before cutting out. The room went dark. Momentarily confused -- Had he pulled the trigger already? Was this what a bullet to the brain felt like? -- Fairbairn let him arm drop. Strong Medicine slipped from his nerveless fingers and clattered to the floor with a sound like stones rattling in a crypt.

It took a moment for Fairbairn to realize he was not dead. When he did, he stood numbly and pushed the curtains away from the window.

His study was on the second floor of the house. This gave him a lovely vantage on the patio and garden, but the reddish column of light rising into the overcast night to the northeast would have been visible from anywhere in the yard.

A preternatural quiet ruled the neighborhood. The lighted backs of houses stared up as if in hushed anticipation. A party with hats and noisemakers had frozen in awkward poses around their birdbath.

As they all watched, the column of smoky light bumped up against some invisible ceiling high in the sky and roiled over into the shape of a blooming mushroom.

His view was abruptly obscured by the black clouds of dust and debris that bore down upon Arlington like an army of thunderous tanks. He threw himself to the floor just as the shock wave hit. His window shattered into a million sparkling projectiles that tinkled and sang as they exploded against the opposite wall. He covered his head with his arms, but not before a freight train roared through the room.

Blackness enveloped him, buffeted him like a toy, and dragged him coughing and sputtering back to the surface of consciousness.

He pushed himself to his hands and knees. Moist warmth trickled from his right ear and down his jaw. His study lay in shambles around him, a warm wind stirring the remains of his professional life.

He pounded his precious hands on the floor.

But then, as if from deep underground, through miles of packed soil, he heard the screams. Dozens of them.

In his mind's eye, Fairbairn saw windows splintering to shrapnel up and down the street, debris raining down on the land, buildings slumping to ground in disordered heaps of brick and stone.

Fairbairn grabbed hold of the desk and pulled himself shakily to his feet, searching the dust-choked gloom for his other medical bag, the hard-sided case, the one that wasn't just for sentimentality and show. He found it under a pile of tumbled books. He tugged it out and shook off the worst of the dust.

He was on his way out the door of the study when he spied Strong Medicine lying in the middle of the floor. He paused, picked up the gun, and considered it a moment. He extended his arm, aimed at a corner of the ceiling, and curled his finger around the trigger.

But he lowered his arm without firing.

Dr. Fairbairn tucked the gun into the waistband of his trousers and descended to the living room. His home lay all in disarray, but as he exited into the gritty, swirling wind that prowled his ravaged neighborhood, as he entered that eerily muffled landscape of suffering, he felt power in his hands and healing in his wings, and he smiled.

Nebula Award nominee William Shunn works as a senior software developer for BenefitsCheckUp.org, a division of the National Council on the Aging.