Moms who say no too much stop having sex and drive their cars off the bridge. So I let my kids have a rice fight. 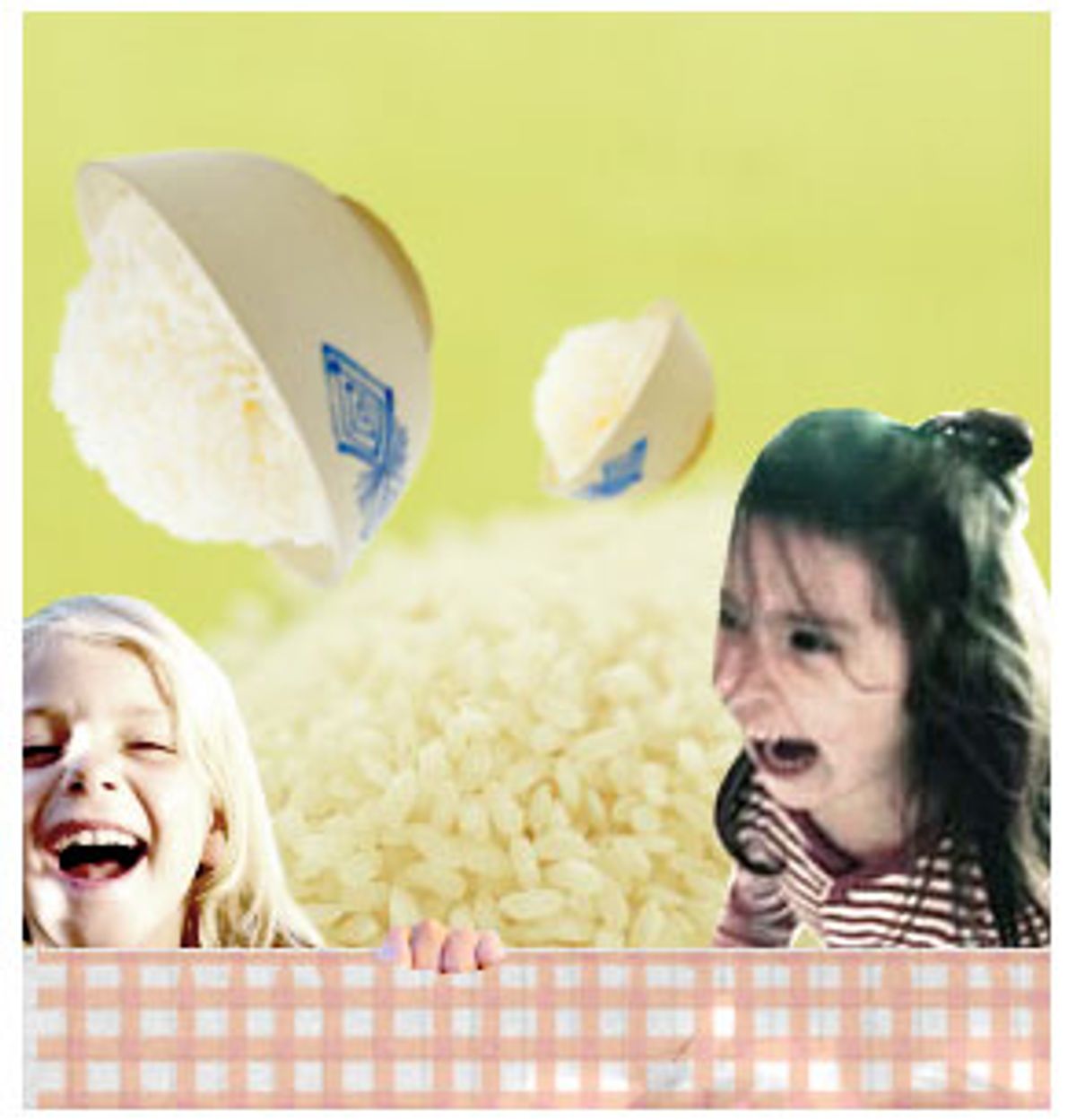 The first thing you need to know about the rice fight was that the margaritas were strong and my husband Mark was out of town, which was nice because he doesn't drink. I had invited two adorable 20-somethings, Sabrina and her boyfriend Alex, over for dinner. It was the end of one of those perfect fall days in the San Francisco Bay Area; hot and breezy, and at 6 p.m. the front door was still open. I'd had the kids by myself for weeks and I was ready to have a little blowout. And maybe I was showing off a little on account of Sabrina who is young and cool and who inspires me to unleash myself from the post of motherhood, let the dog out a little. And as I said, we'd been drinking.

We were sitting around the table, adults yapping and ignoring the kids and out of the corner of my eye I see Zoe, my 4-year-old,take a handful of hot rice from her plate and, in slow motion, throw it at her 6-year-old sister Ruby. But instead of jumping up to squash the thing, I sat there mesmerized, watching. "She's never thrown food before," I thought to myself. "This is a rite of passage, the primal launch."

The rice ball hit Ruby and exploded in her face. She immediately responded on-fire, and grabbed a handful of rice and threw it back at Zoe.

That's how it began. And I didn't stop it.

Here's the thing about motherhood: You say the word "No" all the time, and this word and many of its kind slowly begin to strangle your language, like weeds wrapping themselves around the prettier words you imagined using with your child like "Yes" and "Love" and "That's beautiful honey." But "No" forces its way in and eventually you can't help yourself, this urge to curb, squelch, and put a lid on almost everything your kids get into. Not because you're a meanie but because they are constantly pushing you and it's exhausting and ...

"Because I say so"

"Come down off there"

"I already told you"

"No, we can't pet all of the dogs in the shelter, pick one more and say goodbye."

There you are, constantly throwing water on the passionate fires of your children. Everything you say comes from a place of dread, hesitancy, and fear that these children will mow you down in a moment if given half a chance. And you know why so many mothers are on antidepressants and why they eat too much and drive their cars off bridges, yell at their kids, fight with their husbands, stop having sex and let all the plants die.

The rice fight was a response to that.

One handful of rice inspired another. The adults stopped talking, put down their drinks and turned to watch as Ruby took another handful from the big bowl in the center of the table and threw it at Zoe and then Zoe took a handful and threw it back at Ruby, and then Zoe, then Ruby, Zoe, Ruby, Zoe, Ruby, until the girls were standing on their chairs screaming and laughing, and looking over at me like, when you gonna stop this? Only I didn't stop them because I was so taken by how much fun they were having. And then there was more rice and more shrieking and a shirt came off and then somebody's pants came off and then the girls were naked and rice was sticking to Zoe's tummy and was caked in Ruby's hair. In between throws Ruby would scoop rice off of her body and put it into her mouth and then let it dribble out, just like I used to do as a kid at the dinner table when we had a babysitter and I'd eat a whole bunch of pudding and then let it squish out between my teeth and drip down my chin.

Rice was everywhere, and Sabrina and Alex and I were honking with laughter, choking and dodging the errant grains and pointing at Zoe who had a thousand-watt smile and at Ruby, who, as the oldest, is usually reprimanded for going too far, and who had lately begun to take on the sullen, I'm-in-trouble-again look. She was free now, too. We were all free for the five minutes that the rice flew. You could feel it. A healing, starting in our feet, pushed its way up through our bodies and up through our heads, and everything that was cramped and stuffed down and repressed was coming up and everything that was wild and alive that didn't have a place to go, every food fight we ever had, every food fight we'd stopped having, every time our parents had said "No" to us and then how as adults we'd started saying "No" to ourselves, everything that we were taught to stop doing because it was messy and dirty and ugly and it made you fat and no one did it anymore and if you did it meant you were stupid and unsuccessful, all of this lifted out of us like some great fiery griffin, angry and alive and free.

And as we watched the girls tossing the rice we laughed so hard we began to cry and I wish I could tell you that we were crying for all the sad and missed and dead moments we'd lived and how long it had been since we'd felt the freedom to throw our own food, but it was more that the moment was overwhelming. We were laughing and crying and this sound was coming out of us; sad and happy and horrified at so much pleasure and freedom.

And then it was over as fast as it had begun. The rice was gone and Zoe reached for the chicken and something clicked in my brain, the image of wiping chicken off of walls and I screamed a bloody "No!" and scooped them both up, brought them into the bathroom where they brushed their teeth. I swear, I had them in bed and asleep in 20 minutes because the rice fight had taken everything from them.

Later, when the rice, which was stuck on walls and all over the floor, had dried, Alex swept it up and he and Sabrina went home. I went to bed exhausted but alive.