Where is the real Matrix?

Neural implant devices are now a reality. But misguided federal policies are keeping them from the people who need them. 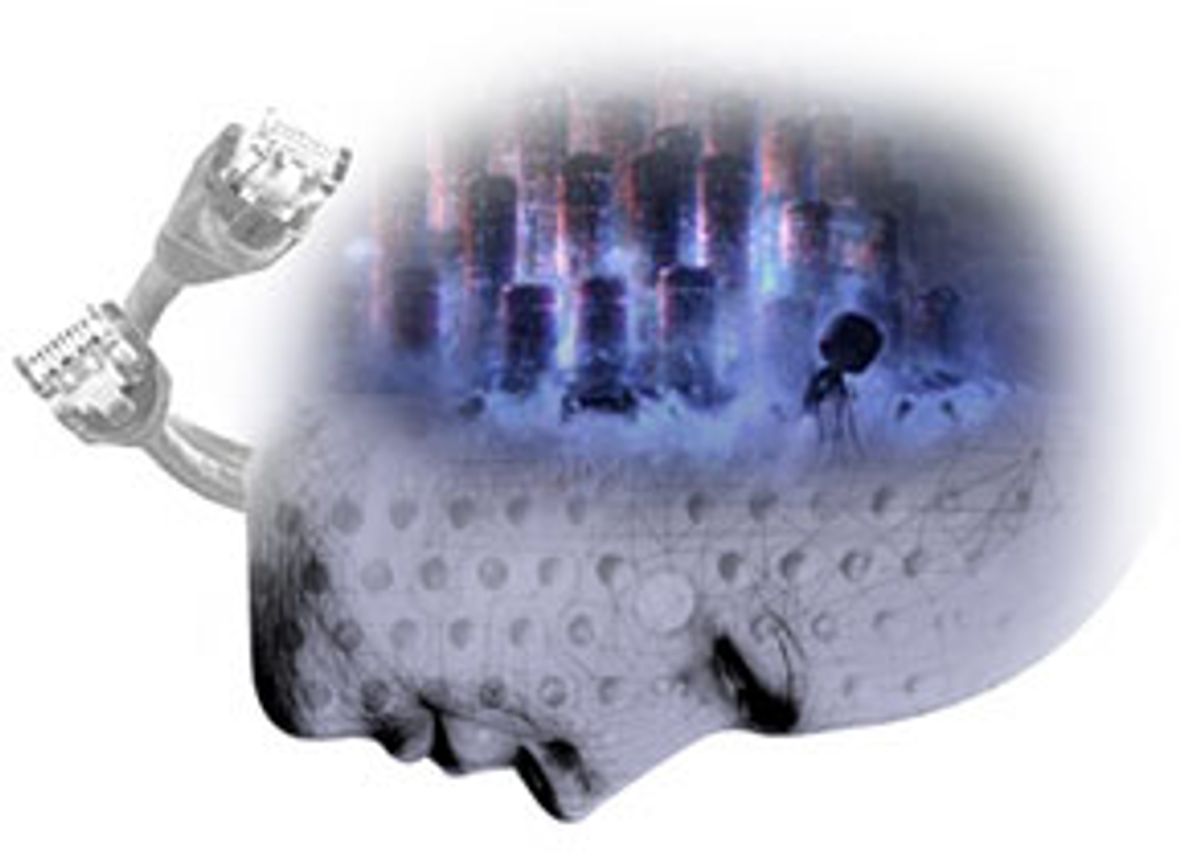 In the futuristic vision of the Wachowski brothers' movie trilogy "The Matrix," humans dive into a virtual world by connecting their brains directly to a computer. Most movie viewers may consider direct interfaces with the nervous system as much of a fantasy as the movie's gravity-defying special effects. However, for a small group of engineers and scientists this very idea is very real -- and is driving advances in medical technology that could help millions of disabled people see and hear -- and live normal lives. Unfortunately, bureaucratic hurdles have slowed the development of this technology, and its potential remains largely untapped.

Real-life human-computer interfaces are called neuroprostheses -- medical devices that connect directly to the human brain, spinal cord or nerves. "Matrix" fans might be surprised to learn that neuroprostheses have been around as long as more "traditional" devices like cardiac pacemakers. In fact, a number of neuroprosthetic devices were already being developed in the 1950s, and by the early 1970s the National Institutes of Health established the Neural Prostheses Program to coordinate research in this promising field.

The first neuroprostheses to become commercially available in the United States were cochlear implants, following their initial FDA approval in 1984. Sound from a microphone placed near the ear is coverted to weak electrical currents that activate auditory nerve endings inside the cochlea in the inner ear. The activity produced in these nerves propagates directly to the brain, where it produces an auditory perception. By bypassing the normal hearing apparatus it provides an artificial hearing sensation to deaf people. To date, more than 55,000 patients worldwide have received cochlear implants. The technology of cochlear implants has enjoyed remarkable advances since the early days. Improvements in signal processing now allow many deaf users to use these devices to perceive speech, talk on the phone, and even listen to music.

While sensory prostheses like the cochlear implant provide a substitute sensory percept, motor prostheses are used to move muscles -- allowing the paralyzed to regain lost function. One example of a motor prosthesis is the FreeHand system from NeuroControl Corp., which uses implanted muscle stimulators to restore limited hand movement in individuals paralyzed as a result of certain forms of spinal cord injury. The user of this system controls it with a controller-stimulator unit implanted behind his shoulder. Limb-control systems like the FreeHand system have been implanted in more than 300 patients.

The most widely used motor neuroprostheses are devices used to stimulate the bladder in paralyzed individuals who have lost control of bladder voiding. Thousands of such devices have been implanted worldwide for over three decades.

A very different use of neuroprosthetic devices is to disrupt unwanted brain activity, which can be the result of different neurological diseases. These devices target the tremors that result from Parkinson's disease, essential tremor, seizures that result from epilepsy, and chronic, persistent pain (which has a variety of causes). They are implanted in patients that are not responding to medication. Anti-tremor devices are implanted by neurosurgeons in the patient's brain, in a region called the basal ganglia. More than 15,000 patients have been implanted with such deep-brain stimulators. Anti-epileptic devices are implanted in the patient's neck region around the vagus nerve. Over 18,000 patients have been implanted with vagus-nerve stimulators to date. Devices for chronic pain have been implanted in a variety of regions, most commonly in the spinal cord.

Many science fiction fans will argue that fully immersive virtual interfaces are the future of brain-computer interaction. The technology for such systems does not exist yet, but interestingly, the development of microelectronic technology over the last four decades, which has enabled chip manufacturers to squeeze hundreds of millions of transistors onto a single chip in your PC or cellphone, may also revolutionize the field of neuroprosthetics, allowing a technical leap in that direction.

Several research labs from universities and companies around the world are using microelectronic technology to develop devices known as "microelectrode arrays." These devices can "interact" independently with a large number of nerve cells: recording their activity or stimulating them. The development of microelectrode arrays has allowed researchers in the field to start thinking seriously about a variety of next-generation neuroprosthetic devices, including new types of neuroprostheses. These include vision prostheses for the blind and brain-computer interfaces for the totally paralyzed.

Brain-computer interfaces are arguably the most "futuristic" devices currently being developed. If successful, they will allow paralyzed individuals to use their brain instead of their paralyzed muscles to communicate directly with a computer or control their environment. This may give patients suffering from the extreme "locked-in" syndrome a way to break out of their disease-induced solitude, and may provide quality-of-life benefits to many other individuals whose paralysis is not as complete. As with most other devices, several possible approaches are pursued in the development of brain-computer interfaces. Recording electrodes can be placed noninvasively on the surface of the scalp or implanted surgically into the brain, where they can be used to tap on the brain's inner communications. Both approaches have pros and cons, and it is yet unclear which carries the best long-term potential.

As humans we experience the world through our five senses, and nerves are used to control the muscles that move our body. Many diseases affect nerves, muscles and brain. Clearly, being able to bypass or block defective systems is an important capability -- this is why neuroprosthetics has many possible applications and holds great promise.

But how have these devices fared in the marketplace? Not well. In the entire 1990s only eight implantable neuroprosthetic devices received FDA approval. Moreover, most of those devices were based not on cutting-edge advances, but on decades-old pacemaker technology.

Why is so little innovation reaching the patient? One basic problem is a mismatch between the hurdles faced by neuroprosthetic devices in finding a profitable market, and the dynamics of the marketplace itself. An analysis of neuroprosthesis commercialization efforts from the last two decades reveals major barriers posed by FDA regulations and even larger barriers posed by device-reimbursement policies that fail to account for long-term economic benefits.

The existing regulatory environment is largely adapted for the drug market, in which large companies and vast markets can shoulder long-term financial risks. However, the same environment has slowed neuroprosthetic commercialization and development to a trickle.

Entrepreneurs in this field typically face a decade of regulatory uncertainty and chronic underpayment for the devices themselves. Many entrepreneurs are willing to shoulder this uncertainty, but the environment makes it difficult to raise the capital necessary for clinical trials and the initial phases of entry into the marketplace. This factor led directly to the discontinuation of the first cochlear implant introduced the United States: the 3M/House implant. More recently, distribution of the FreeHand system described above has been discontinued following disappointing financial results.

Most neuroprosthetic devices target a relatively small patient population, making them ideal candidates for the FDA's Humanitarian Device Exemption (HDE), which is supposed to waive the costly effort of demonstrating effectiveness. However, in its present form this exemption imposes a heavy burden on developers and hospitals as well as tight legal limits on device prices. In essence, the restrictions have so far prevented profitable manufacturing of the devices in the United States.

The Vocare system, which restores bladder control to paralyzed individuals and was marketed in the United States by NeuroControl Corp. of Cleveland, Ohio, is an illustrative example. Despite years of availability in Europe, the Vocare system was withdrawn from the U.S. market following two years of disappointing financial results, leaving tens of thousands of paralyzed individuals without an equivalent alternative. This withdrawal is largely attributable to restrictive HDE policies. There are signs that at least some of the inefficiencies in the FDA review process are slowly being eliminated: Removing the HDE caveats would probably prove invaluable to neuroprosthetics as well as to their target users.

The most serious barrier is undoubtedly the reimbursement policy, largely determined in the United States by Medicare. Medicare's prospective-payment system does not contain specific reimbursement codes for neuroprosthetic devices, and they are invariably assigned to nonspecific categories that cover surgical costs but greatly underpay device costs. In fact, of the more than 500 reimbursement codes, only four inpatient categories are specific to implantable devices -- all for cardiac pacemakers.

One may argue that this is a reasonable policy choice for cutting medical expenses, but a number of studies have shown that the long-term financial benefits of devices such as cochlear implants for the deaf, vagus-nerve stimulators for controlling epilepsy, and other neuroprosthetic devices are much greater than the immediate costs associated with device purchase and implantation.

In spite of those studies, Medicare consistently underpays for these breakthrough technologies. Furthermore, the years spent until the actual reimbursement decision is made have already led to the withdrawal of several devices. There is no reason to assume that the fate of future neuroprostheses will be different. Reimbursement adjustments that will allow a more predictable, expeditious and unbiased payment for breakthrough medical devices (possibly by using temporary reimbursement codes) will almost certainly boost innovation in this field.

In his groundbreaking 1984 novel "Neuromancer," where "The Matrix" was born, William Gibson describes a future with vast computer networks accessible through direct human-computer interfaces. Gibson's "cyberspace" has become an everyday reality in the World Wide Web, but the development of direct neural interfaces is still a disappointment. Simple policy adjustments can change this trend, allowing these useful devices, many of which can already be manufactured, to set the stage for major improvements in this branch of medical technology.

Shy Shoham is a neuroscientist at Princeton University. Sam Hall is one of his former undergraduates.