The grainy, night-vision sex video circulating the Internet will satisfy people wanting to see Paris Hilton debased. (Is that redundant?) But Pamela and Tommy Lee have nothing to fear. 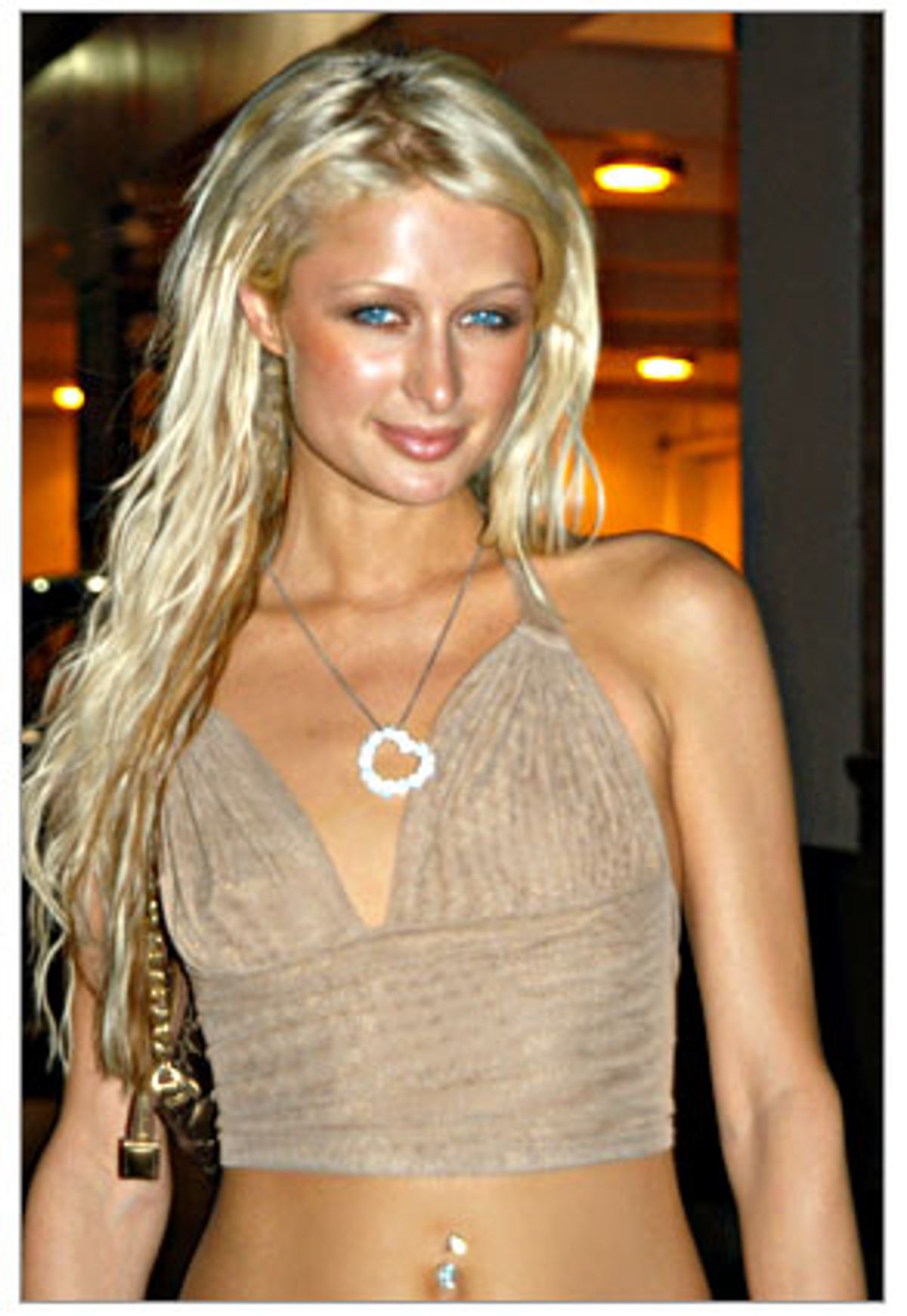 It's beginning to get cold outside, and cozy office cubicles this week were warmed by the hotly anticipated release of the Paris Hilton Sex Tape -- or at least the three-minute highlight reel that's circulating on the Web, and will have to satisfy until a director's cut premieres.

Is it really Paris Hilton, the 22-year-old full-time party girl and heiress to the Hilton Hotel family fortune, on the grainy video? The woman certainly looks like her -- at least in close-up. And there seems no doubt a video exists. While Hilton denied as much a few weeks ago, her publicist, Siri Garber, has admitted its existence to the press, including Salon. "It is actually illegal for anyone to posess this tape -- it is a felony -- and the Hilto [sic] family is taking action against anyone who has the tape," Garber told Salon in an e-mail, responding to our inquiries last week, "so I suggest you do not pursue this further ..."

Too late. As of Monday, bootlegs of the video had popped up around the Internet, claiming to feature Hilton having sex with one Rick Solomon three years ago. Solomon is an independent movie producer and online gambling entrepreneur (who is -- alas -- not the same Rick Solomon who produced "Free Willy"). He is married to famously bratty former "Beverly Hills 90210" star Shannen Doherty, and has also dated Devon Aoki, the heir to the Benihana restaurant chain fortune. In other words, when the Paris Hilton Sex Tape is released on DVD (in time for next Christmas?), it should bear the subtitle "When C-Listers Copulate."

The Hilton family is trying to stop Seattle Internet porn company Marvad from peddling the video on its Sexbrat.com site. So is Solomon, who is also threatening the Hiltons with a possible defamation suit, claiming they say he took advantage of Hilton (Garber told reporters Hilton "can't even get up" in the video, and "she is the victim here.") But the bigger question is: Should we care? For those somehow unfamiliar with Hilton and her younger sister Nicky, they became famous in boom-time New York for being blond and rich and dancing on nightclub tables (and for a picture of Paris' hooch still widely circulated on the Internet). They are a staple of the gossip columns. Paris is also the star of Fox's upcoming, and long delayed, "The Simple Life" -- a reality show that transplants Hilton and another rich friend into a poor Southern family. The appeal of the show and the sex video don't seem fundamentally different: Watch the rich girl get debased!

And, assuming the clip making its rounds on the Internet is indeed of Hilton and Solomon, it definitely accomplishes that.

The version of the video available in the Salon New York offices was not of the highest quality. Shot in what may have originally been black-and-white, it appeared -- perhaps because of the monitor, or because of a poor duplication, or just a cheap camera -- to be a reverse negative, causing it to look sleek and atmospheric, as though stills of it might someday hang at the Whitney.

It begins with something we could not figure out, but soon slips into a shot of a woman who seems to be Hilton on her back, being rhythmically rocked back and forth by what soon appears to be Solomon's slightly larger than average but nothing to write home about penis. A quick cut brings us to him, reclining in bed, stroking himself. Within moments, she has joined him. After staring at the camera, her back arched, her chin tilted as if she were on a red carpet, she turns and straddles him.

Another quick cut brings her back up onto her knees. Dramatically tossing her blond mane, she turns as he enters her from behind for some doggie-style rutting. Then, quickly, she is on top again, facing the camera, swaying her hips from side to side.

It's in these shots that the she looks her best -- the graininess adds texture and contour to her body. Her raccoony eyes go momentarily stark white; she is a pornographic Orphan Annie, with some of Darryl Hannah's Pris from "Blade Runner."

But her glamour dissipates in the next and final scene, which has the greenish, serial-killer-chic look of night-vision photography. You half expect to hear a voice explaining that these images are coming to you thanks to the brave reporters embedded at the No-tell Motel. Her face looks confused and drawn. She stares blankly at the camera, as though she has been drugged, and then begins to perform oral sex on Solomon -- or on someone; it's not as if we see his face.

It is in these shots that the woman looks most like the familiarly vapid socialite we recognize. In fact, the rest of the film could be of someone else.

The Paris Hilton Sex Tape will immediately recall the gold standard of pilfered celebrity smut, the Pamela and Tommy Lee tape of 1996, though the Paris Hilton Sex Tape will not be flattered by the comparison. The choppy three-minute clip lacks all of the heart and hilarity of the Lee romp, which featured the "Baywatch" star and her swain in several bootylicious locations, in the days before their kids were born, before she filed domestic violence charges against him and started dating Kid Rock.

That film had an emotional and sexual center. There was something stirring (if frightening) about the way that Pam unzipped her husband's pants during a road trip and took his enormous and erect penis in hand. "Look how lucky your mommy is," Anderson intones to her then-unborn children. "This is going to get her through the rest of her life." There were even belly laughs, like when they were on the boat, and he used his then-flaccid but still impressive member to honk the horn and yell to a swimming Pam, "I fucking love you, baby."

No, the Paris Hilton Sex Tape appears to be free of these moments, though the camerawork is at least steady. But the clip is not funny, it's not warm -- it's not even hot. It looks instead like a poor-quality home video of two narcissist strivers dying to get noticed by the world. And by those standards, I suppose, the film can be considered a success.