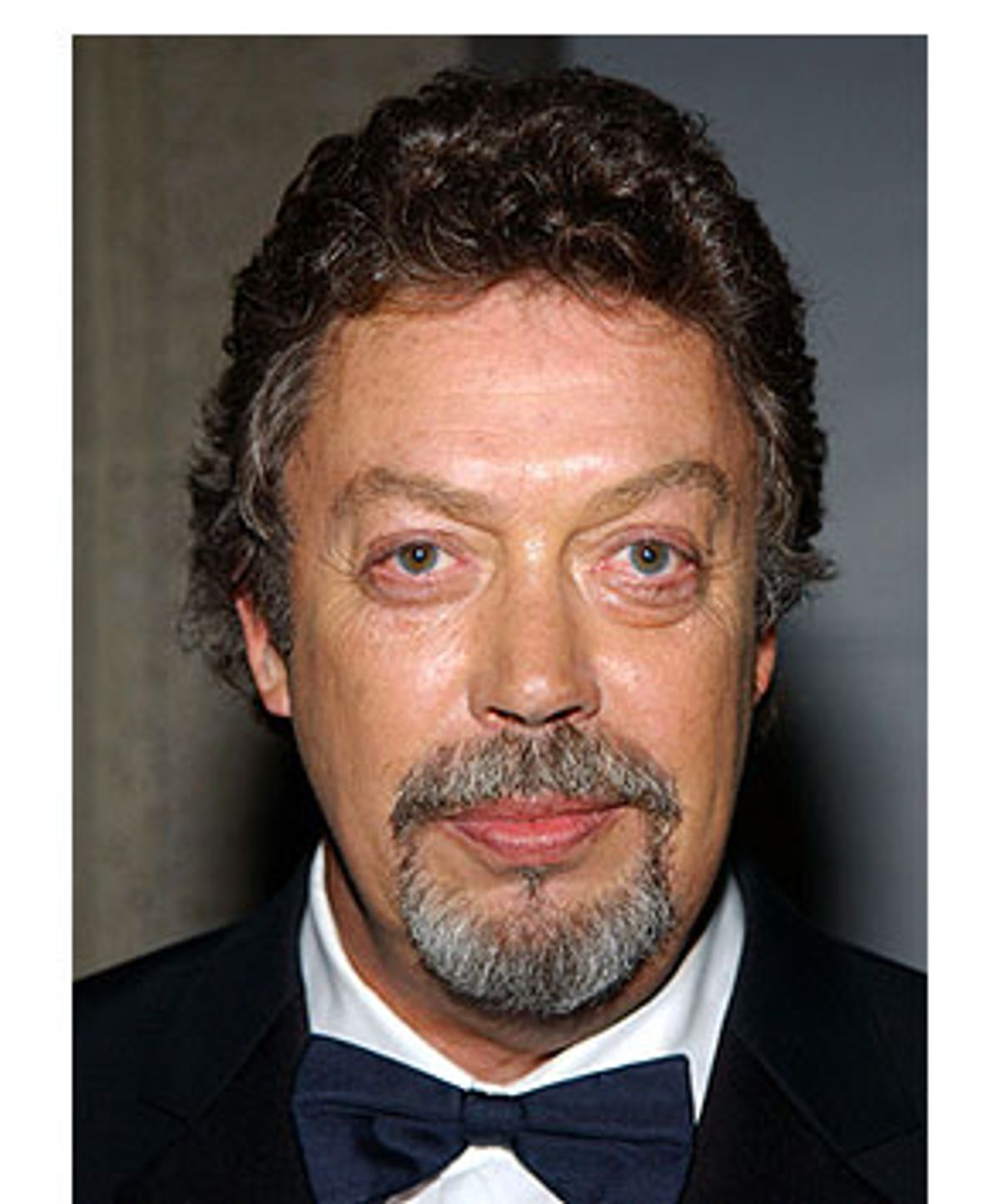 The most the average audiobook has to offer is convenience. You can absorb a book on tape or CD while driving, exercising, cleaning the house or doing anything else that requires your eyes to be occupied elsewhere. And the most the average audiobook consumer can hope for is that the recording won't mess with the book too much. A reader who's stilted or stagey, or -- and this is my own pet peeve -- a male reader who adopts a breathy, high-pitched voice for the dialogue of female characters can make the audio version of a good novel unendurable. If you read quickly, even an acceptably performed audiobook can feel like a frustrating slog. Plus, you can't easily flip forward or back in the text, or skim through long passages of landscape description, the way you can with print.

But an audiobook that actually adds to an author's work? That ideal once seemed as remote and fabulous a creature as the unicorn. Or so I thought, until a friend gave me Tim Curry's performance of Lemony Snicket's "A Series of Unfortunate Events #6: The Ersatz Elevator." Mr. Snicket used to read the audio versions of his books himself, and he did a pretty good job of it, too, but recently Curry -- best known for playing Dr. Frank-N-Furter in the film version of "The Rocky Horror Picture Show" -- has taken over. Perhaps Mr. Snicket, who is wanted in several jurisdictions on an assortment of trumped-up charges, has found it necessary to lower his profile, or perhaps he has come to find the details of the Baudelaire orphans' case too misery-inducing to read aloud. Whatever the reasons for this change, Curry's recordings of the Series of Unfortunate Events are sublime, the perfect marriage of material and performer and the only audiobook I've heard that manages to improve creatively on the print version.

Some adults might still be wondering why they should bother with books that are, after all, aimed at children, but more than almost any other crossover literary hit, Snicket's work is laced with treats for older readers. Each book features a pointed satirical portrait of a particular type of adult incompetence (being afraid of everything, being excessively optimistic, being overly preoccupied with what's "in"), and for those who delight in allusions, anagrams and puzzles after the fashion of Lewis Carroll, here is your nirvana. (An impressive listing of them can be found here.) "The Hostile Hospital," for example, mentions in passing one patient, Clarissa Dalloway, in Room 1508, "who doesn't seem to have anything wrong with her at all," and the latest installment, "The Slippery Slope," has to be the only book labeled "For ages 9 to 12" that quotes both Nietzsche and Swinburne and includes a definition of Stockholm Syndrome.

Somehow, the tone of solemn disconsolateness that so tickles young readers proves equally amusing to those old enough to have been subjected to much the same sort of thing in deadly earnest. Still, for adults not sure they want to sit down with a volume clearly marketed to readers one-third their age, audiobooks make for a happy alternative. If you're the sort of person who insists that all your reading should be an improvement to the mind, tapes and CDs provide an out: They don't have to pass for more than a diversion.

The best children's books have a theatrical quality that facilitates reading aloud, yet the Series of Unfortunate Events does present some formidable challenges in that department. The narrative voice must be deadpan, of course, and Curry pulls it off, but this is the only aspect in which the author has a slight edge. There's a faint throb of grief in Snicket's narration, the whisper of a sigh, that Curry -- who can't possibly feel the tragedy of these events as deeply -- doesn't quite match.

The books also feature dozens of characters, and here is where Curry flourishes, creating a distinctive voice for each. (British accents predominate, but no one does a more preposterous preposterous French accent than Curry.) One in particular, the voice of the arch-villain Count Olaf, is a notable improvement on the author's version. Snicket's Count Olaf spoke with a migraine-inducing nasal whine -- appropriately repellent, perhaps, but not exactly listenable. Curry's Olaf is both raspy and sinuous, with a laugh of such hair-raising malevolence that Jim Carrey (set to play Olaf in the upcoming movie) will have his work cut out for him in leaving his own mark on the role.

Others are just as memorable: the oleaginous cooing of Count Olaf's treacherous and very, very fashionable girlfriend, Esmé Squalor; his mug's gallery of henchmen, including the Hook-Handed Man, the Bald Man with the Long Nose, the Two White-Faced Women, and the Person Who Looks Like Neither a Man nor a Woman; and the three Baudelaire orphans themselves. Curry has cast the subtlest difference between the voices of Violet and Klaus, though each is the very essence of stout-hearted resourcefulness and a certain polite, literal-minded gravity. (Sunny's infant utterances, in a kind of coded gibberish, merit a graduate school thesis of their own.)

"The Slippery Slope" is, at six hours, the longest audiobook yet in the series. It's a key text, revealing not only several important facts gleaned from the notorious Snicket File, but also featuring the appearance of an individual previously thought dead, the introduction of two people too menacing to name, and some wholesome transitions in the lives of the Baudelaires themselves. Nevertheless, Curry's moment of glory so far has been the recording of "A Series of Unfortunate Events #9: The Carnivorous Carnival."

In "The Carnivorous Carnival," Violet, Klaus and Sunny, having stowed away in Count Olaf's car during their flight from the burning of Heimlich Hospital, arrive at the eponymous attraction. They hope to learn more about the mysterious V.F.D. and to follow up on hints that one of their parents has survived the fire that destroyed the Baudelaire mansion. To elude Olaf's clutches, they disguise themselves as freaks and seek employment at Caligari Carnival's House of Freaks. Violet and Klaus occupy a single costume, pretending to be a "two-headed person," while Sunny, covered in fake hair, is presented as someone who is "half wolf and half person," aka Chabo the Wolf Baby.

Disguises are a key Snicket motif (this is one of the few books in the series in which Count Olaf does not attempt to pass himself off as someone like Stephano the lab assistant, Captain Sham, Coach Genghis, Günther the interior decorator or Shirley the receptionist). Silly accents come with the territory, but for Beverly and Eliot (Violet and Klaus' fake two-headed identity), Curry brilliantly manages to create disguised voices that are variants of the voices he's already created for Violet and Klaus. He adds to this an array of cretins among the carnival's spectators, the perpetually stoked reporter from the error-ridden Daily Punctilio newspaper, Madame Lulu the fortuneteller with her goulash of Eastern European intonations and the orphans' fellow residents in the House of Freaks. (In an especially amusing touch, all the wicked, misguided and contemptible characters say the word "freak" with exactly the same emphasis, a ski slope of nasty glee.) They include Colette, a woebegone French contortionist, and Kevin, who can barely choke back the tears as he describes his lonely lot as a freakishly ambidextrous person who can sign his name equally well with either his right hand or his left hand.

"The Carnivorous Carnival" is already one of the funniest Snicket books, but Curry's performance tips it over the edge into hilarity. His propensity toward hamminess is exactly what's required by the Series of Unfortunate Events. Sometimes, he works it hard, in the voices of a degenerate crowd demanding ever grander spectacles of "violence and sloppy eating" (specialties of Caligari Carnival), say, or in stretching Mr. Poe's chronic cough into a near-epic expression of his inadequacies as the orphans' financial executor. (Curry can get phenomenal mileage out of a cough or chortle.) Sometimes, he merely brings a fillip of zest to the books' running jokes. When Curry speaks of Count Olaf's "shiny, shiny eyes" (one of the series' refrains) or adds a sepulchral echo to that fateful address, 667 Dark Avenue (it comes out "667 Dahhhk Avenue"), you can imagine children across the nation mimicking him with relish. And if you aren't tempted to do it yourself, you really might want to think about lightening up a bit.