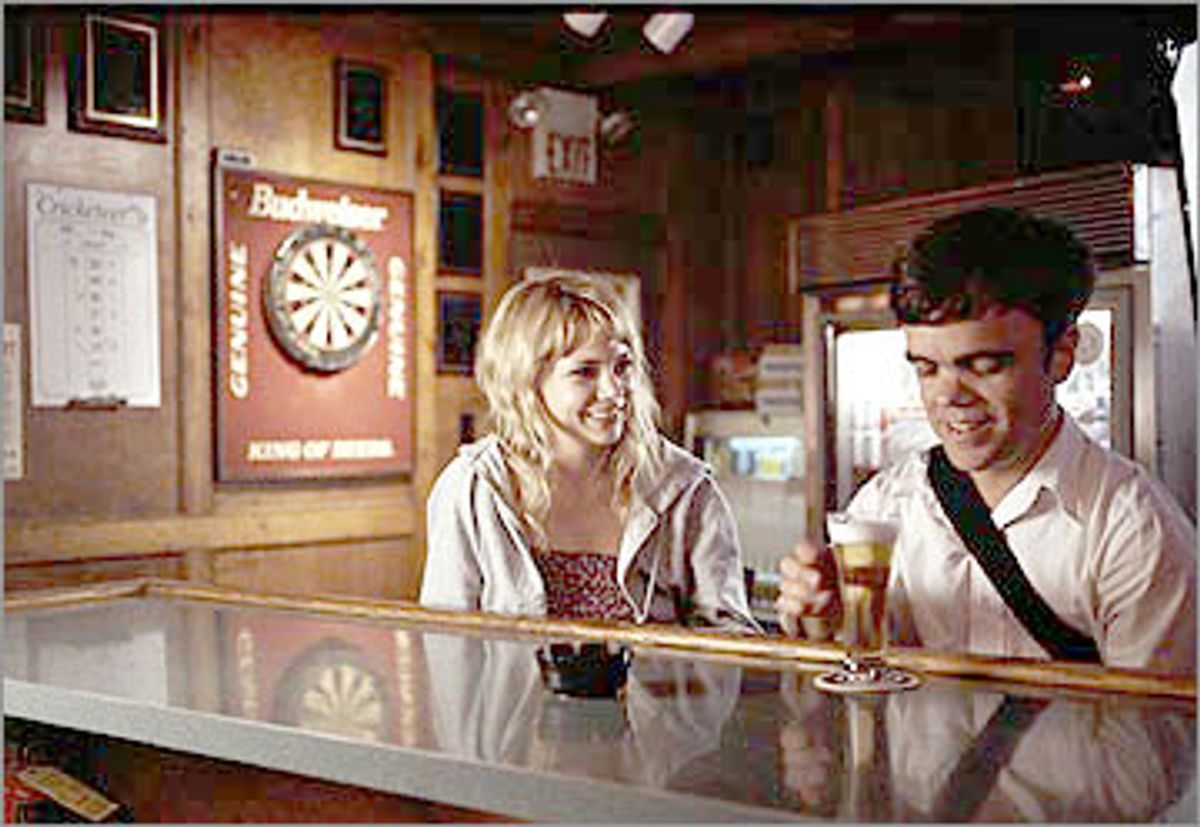 I delayed going to see "The Station Agent" because a movie that was a hit at Sundance about a dwarf who inherits an abandoned railroad depot in rural New Jersey sounded like my idea of purgatory. My mistake. Writer-director Tom McCarthy's movie plays like an American indie version of a Bill Forsyth comedy, or like a more straightforward version of something the Finnish director Aki Kaurismäki might come up with. Its quirkiness is a matter of natural affinity rather than affect, and McCarthy clearly knows the difference between empathy and sentimentality. McCarthy earns the warm feelings his movie evokes for the people on screen.

One of the great things about Bill Forsyth movies like "Local Hero" and "Comfort and Joy" was that they freed up your responses. Any particular moment might strike each member of the audience in a different way. (I know someone who thought the funniest moment in "Gregory's Girl" was when the teenage hero was waiting for his date and very gravely checks his wristwatch -- even though he's standing right in front of the huge town clock.) If you recorded an audience watching "The Station Agent," you'd end up with a tape that revealed pockets of giggles coming from different parts of the theater throughout the movie.

The opening scenes proceed with deft narrative sleight-of-hand. Finbar McBride (Peter Dinklage) works in a model train store in Hoboken, N.J. When the store's owner, his friend Henry (Paul Benjamin), dies suddenly, Fin finds Henry has left him a parcel of land in a remote Jersey town on which stands an old, unused train depot. With the shop about to be sold, Fin packs up and heads for his legacy.

McCarthy might be invoking Chaplin in the shots of the somber Fin clutching his small suitcase as he walks along the railroad tracks to his new home. But there's none of that shmucky Chaplin bathos. We knew we were supposed to love Chaplin, but we don't know what to make of this man. At one point, Fin says that people are always curious about him, though he's really just "a simple, boring guy." He's right that dwarves arouse people's curiosity, but that's only part of the reason the characters who meet Fin are fascinated by him. He's one of those people who create and carry an air of mystery about them. A loner, taciturn in his speech, he's almost always dressed in a black suit, white shirt and black tie. At first he seems like an undertaker who considers himself to be always on duty. Everything about him, from the way he resists people's attempts to make conversation to the fact that he rolls his own cigarettes, is the mark of a man for whom self-sufficiency is everything.

We want to know more about Fin, but McCarthy makes a shrewd choice to withhold what other filmmakers might consider crucial information. The shorthand the director uses to set up the story is the same method he uses to explore Fin. It's clear that Fin has been an object of derision for much of his life: Kids laugh at him on the street and people stare in supermarkets. "The Station Agent" doesn't milk those moments for sympathy, and it offers no big revelations about Fin's past. McCarthy's hero may be a dwarf, but he seems to believe that the thing that would really reduce Fin would be to offer up some back story that would magically explain him. He hasn't made a movie about a dwarf; he's made a movie about a man who happens to be a dwarf. Like the people who come into Fin's life, we have to take him as we find him, getting to know him as we go along.

Peter Dinklage is in perfect tune with McCarthy's approach, trusting in the knowledge that accrues from familiarity rather than the rush of a sudden revelation. In a way, his performance is a case of making contradictions work. It's a charming performance that never makes an overt attempt to charm us and also a likable performance that doesn't attempt to be ingratiating. A well-known actor might have his or her persona to trade on when attempting this kind of performance. Dinklage is working without a net. The self-assurance he shows as an actor finds a perfect consonance with his character.

It takes enormous confidence for a first-time director to work so elliptically and to have faith that he can evoke sympathy by understatement. You see that understatement at work in the movie's two other major performances, Patricia Clarkson as Olivia, a painter who has chosen seclusion after the death of her child and the attendant breakup of her marriage, and the wonderful Bobby Cannavale as Joe, the young Cuban-American who has taken over his ailing father's coffee truck. Either one of these characters could be a cliché: the wounded neurotic artist and the simple but good-hearted regular guy.

Everything Cannavale does in this movie made me laugh. There isn't a moment when he descends into dem, dese, and dose-isms. Tagging along as Fin goes trainspotting or chasing trains with Fin in his coffee truck, Joe has a kid's enthusiasm and a party guy's readiness for anything. At first, Joe is so antsy, it's all he can do to sit quietly with Fin and try to maintain his interest in reading "All Quiet on the Western Front." By the end, he's happy just to enjoy his new friend's company, and we note that Joe is in the midst of a much thicker book. It's a small grace note that fits this lovely performance. And Clarkson is, as (almost) always, remarkable, seeming both sharp and vulnerable, playing a private person's tentative steps toward being outgoing.

McCarthy has great taste in actors. That ray of sunshine Michelle Williams shows up as the local librarian who develops tender feelings for Fin, and the astonishingly self-possessed young actress Raven Goodwin turns up as a little girl who makes Fin's acquaintance while playing around the abandoned railroad cars on his property. When Goodwin made her first appearance in last year's "Lovely and Amazing," she made my jaw drop. Actors many times her age never manage the assurance she showed simply walking on screen. She's guileless and never in danger of being cuddly; she's one of those kids who make you laugh because she's so in charge of herself.

In a movie as delicate as "The Station Agent," moments that violate the emotional balance stick out. When Michelle Williams' boyfriend bullies Fin, when he has an outburst at the local bar, and in the bits of melodrama that propel the film to its climax, the movie threatens to go out of whack. McCarthy always recovers, though. At some level, "The Station Agent" is a conventional movie. It's about how a group of misfits form a community. But a movie about people finding friendship and acceptance doesn't have to be sappy if the director shows some faith in his actors, his material and his audience. It's hard to say why "The Station Agent" sends you out feeling so benevolent. It may have something to do with being in the presence of a director who treats you with respect. McCarthy allows us to feel without telling us how and what we should feel. He's made exactly the type of movie that American independent cinema was meant to encourage. "The Station Agent" never leaves its sleepy patch of New Jersey. But when it's over, you know you've been somewhere.