Al Green has never matched the nuanced, whispered restraint of his early-'70s classics. But a long-awaited reunion album with producer Willie Mitchell reminds us of his greatness. 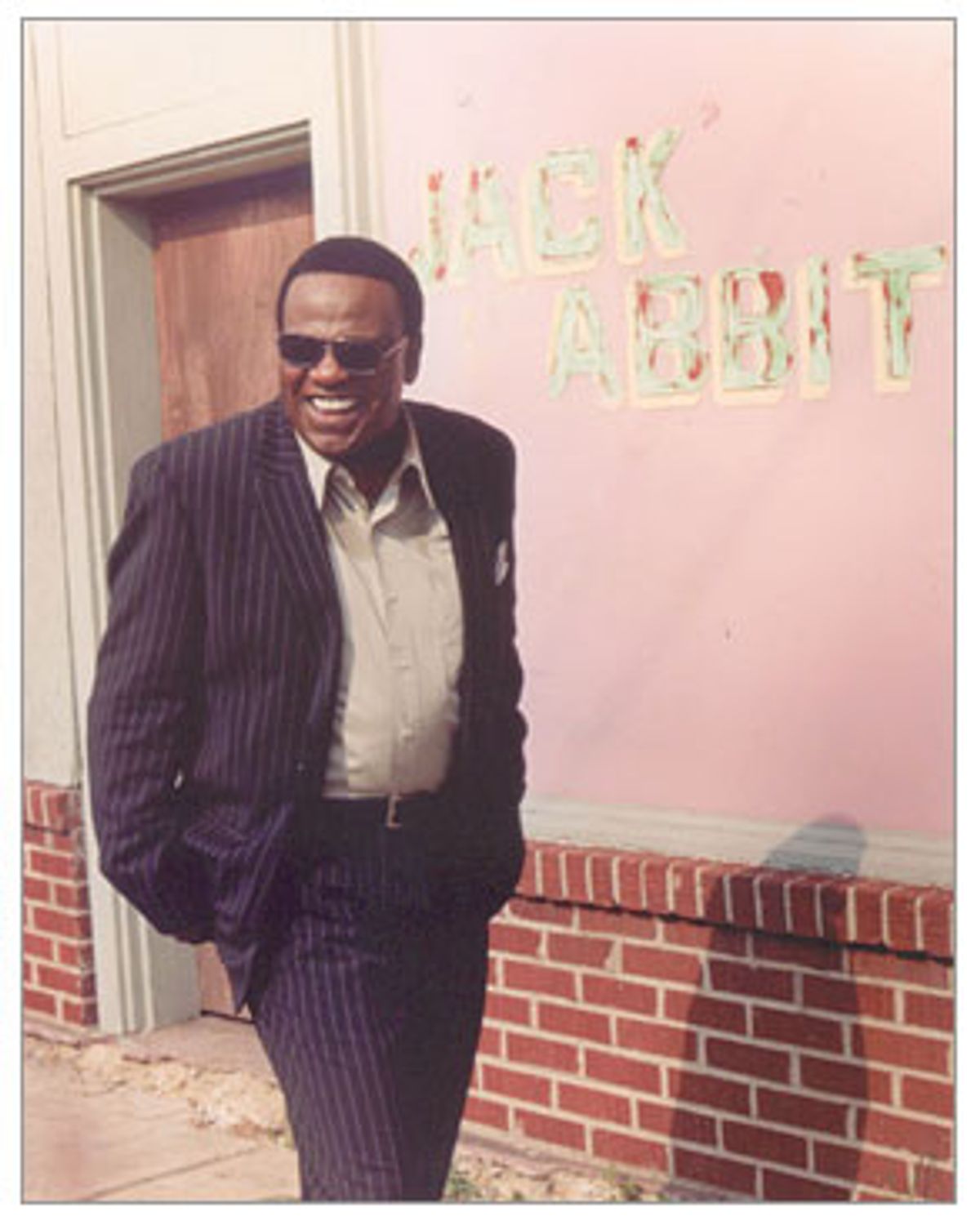 If ever there was a voice that sounded like a caress, it was the voice of Al Green. Much has been made, and rightly so, of the ways that microphones changed the course of singing, allowing voices and inflections to develop and flourish that could never have been heard acoustically. More than those of any other singer I can think of, Al Green's true talents would have been obscured without a microphone to deliver them to us.

In the late 1960s, Green was already a good soul singer, channeling bits of Sam Cooke and Otis Redding, but with a smoother delivery than either of them. In the early '70s, he learned to do what made him great, what made him sound like Al Green: He learned to whisper. It's that hushed voice that carried "Let's Stay Together" to the top of the charts, making it the most successful soul single of the '70s. But despite the enduring popularity of that song, Al Green himself has never quite caught the public imagination, never become the icon he deserves to be. His frequent cameos on "Ally McBeal" probably did more than anything else to raise his name recognition in the '90s, but the man and his music remain relatively obscure.

Between 1971 and 1973, Al Green made three consecutive albums for Hi Records, "Let's Stay Together," "I'm Still in Love With You" and "Call Me," that rank among the greatest, and the most underappreciated, soul and pop records of all time. He made good records before ("Gets Next to You") and after ("Is Love"), but the qualities that made him great can be found in their purest form on these three records. Those were important years for soul; there were also high points for Marvin Gaye ("What's Going On," 1971; "Let's Get It On," 1973), Curtis Mayfield ("Superfly," 1972), Isaac Hayes ("Shaft," 1971) and Stevie Wonder ("Talking Book," 1972; "Innervisions," 1973). Green's records may not be able to compete in terms of the critical praise they have received, but that injustice is just waiting to be corrected.

Unlike Gaye, Mayfield, Hayes and Wonder, Al Green was not, by nature, a self-producer. Some of his later efforts prove that he was talented in that role, but his best work was done with Willie Mitchell at the controls. Rarely has there been a more perfect match of singer and producer. Mitchell constructed a sound to match Green's increasingly featherweight vocals, each pushing the other into more and more delicate territory. Where a less subtle producer might have surrounded Green's voice with lovely, string-saturated mush, Mitchell's genius was in the restraint and clarity of the sound. There are strings, to be sure, as well as a horn section and some backup singers, but they are arranged with a striking cleanliness and economy of line, never intruding on each other, let alone on Green's vocals.

Stirring underneath, as translucent and ghostly as the strings are clear, are guitar, bass, and organ. They are played by the Hodges brothers, Tennie, Leroy and Charles, in-house musicians for Hi Records, and among the self-effacing bands ever assembled. Their work on these records is restrained and subtle, a band walking on eggshells, but somehow still relaxed and loose. Anchoring the whole sound, and mixed unusually loud compared to the rest of the band, are the drums, played sometimes by Howard Grimes, sometimes by Al Jackson. Jackson is the more aggressive drummer of the two, pushing the beat forward where Grimes always holds it back a little, but both play with admirable simplicity.

Mitchell, a brilliant engineer as well as producer, somehow managed to layer all these sounds in such a way that leaves an ocean of space, somewhere between the rhythm section on the bottom and the strings and horns on tops, for Green's voice. And Green, for his part, filled that space with the most deliciously tender pillow talk that has ever come out of a singer's mouth. On these three records, he never once raises his voice, never pushes it, never makes an aggressive sound. Where other singers let their voices crack at emotional moments, he retreats even further back into a whisper, as if turning inward. That's what makes the singing so unusual. It's sexually charged, albeit in an unthreatening, testosterone-free kind of way, but it's also deeply introspective, almost meditative.

Green is also a far better songwriter than has been generally acknowledged. Of the 27 songs on these three albums, he wrote 13 and co-wrote eight (the remaining six are covers). It would be absurd to pretend that he was a brilliant lyricist. He strung together more or less standard love song lyrics, usually reaching for the easy rhyme. He made up for his verbal clichés by breaking into brilliant wordless improvisations in the midst of his songs. His compositions are of a delicacy that perfectly matches the singing and production. It's surprising to listen to some of the hits ("Let's Stay Together," "I'm Still in Love With You") and realize how harmonically ungrounded and oblique they are, shifting from pastel-colored chord to chord without ever seeming to settle on a root.

The album "Let's Stay Together" is, of course, driven by its title track, Green's first No. 1 single, his biggest hit, and something of a manifesto for Green and Mitchell's newly subdued sound. Taken as a whole, it is the meatiest, most robust record of the three, with a touch of gritty Southern soul remaining from Green's earlier days. "I'm Still in Love With You" is a more tender album, Green at his most romantic. It has two more brilliant and successful singles (the title track and "Look What You Done For Me") but the real treasures are to be found among the album tracks that never made it to the radio. Green's first foray into country music, a cover of Kris Kristofferson's "For the Good Times," is six-and-a-half minutes of heartbreak and bittersweet nostalgia, Green harmonizing gloriously with himself on the chorus. Better still is the Green original "Simply Beautiful," which lives up to its title gracefully and is arranged with a minimalism far ahead of its time.

As good as these two albums are, "Call Me" is better, the apex of Green and Mitchell's work together. From start to finish, it sounds as if Green is whispering into your ear, giving the album an intimacy rarely achieved elsewhere. On almost every track, Green recorded a second vocal track, sometimes murmuring his agreement with the lead vocal, sometimes punctuating with a muted cry. Often his two vocals intertwine, becoming difficult to separate, enfolding each other in a wordless embrace. Green's inventiveness in these passages is exhilarating. He's as in love with his voice as we are, but he knows better than to show off or to push it. His improvisations on this record are so subtle, so subdued, that they sound as if they're happening inside his head (an effect that jazz trumpeter Miles Davis often achieved).

Green and Mitchell collaborated on five more records after "Call Me," and while all of them are good, with more than a few moments of brilliance, they are significantly less satisfying. This is not all that surprising: A sound that is based on an aesthetic of restraint can only hold up for so long. I don't know why it is, but every time an artist creates a truly delicate aesthetic, it appears to disintegrate after a few years, and inevitably loses its luster. At the same time, Green was beginning to move away from a secular life, and secular music.

In 1974, his ex-girlfriend Mary Woodson broke into his house, poured boiling grits all over Green in his bathtub, and then shot herself. Green took this as a message from God that he should join the ministry. Two years later, although he was still recording soul records, he had been ordained pastor of the Full Gospel Tabernacle in Memphis, where he still preaches today. Three years after that, he fell off the stage at a Cincinnati concert, injuring himself badly. Green saw this as a further sign that he should quit secular music altogether, so he began performing and recording only gospel.

If you want to disappear from the pop-culture consciousness, there's no better route than immersion in religion. After the initial shock waves caused by Bob Dylan's late-'70s conversion, he became practically invisible during his born-again phase. With Al Green, there wasn't even that initial shock. He just faded quietly into semi-obscurity. In the intervening 24 years, Green has produced a steady stream of gospel albums that, while often excellent, have never approached the heights of his early '70s work. These records have been largely ignored. Most critics and music snobs (I'm no exception) will dig happily through record bins to find old Mahalia Jackson albums, but have little or no interest in contemporary gospel.

In recent years, Green has started to put secular songs back into his set lists, though he still focuses primarily on gospel. I heard him in concert a few years ago at the Royal Albert Hall in London, and it was a confusing experience. The first hour of the concert was gospel, with lengthy preaching sessions between songs. Green exhorted the audience to take Jesus Christ as their personal savior, and as I recall, 26 of them accepted the offer then and there. They were blessed by the Rev. Green right on the spot, TV preacher style. His evangelical mission accomplished, Green had a huge tub of long-stemmed red roses brought out on stage. For the next hour he performed a set of his greatest hits, while running through the hall offering roses to any pretty girl he saw in exchange for a kiss.

Green recently reunited with Mitchell to make "I Can't Stop" (just released on Blue Note), their first album of secular music in 27 years. (Mitchell produced one of Green's gospel albums in the mid-'80s). I was ecstatic when I heard the news, expecting a magical return to the form of 1973. In retrospect, that was a foolish expectation. The album is a disappointment. On the surface, not much has changed: the same arrangement style, a fresh batch of songs in Green's signature style, even two of the Hodges brothers back on guitar and bass. But the magic is gone. Green's voice is as supple as ever, but he's more interested in pushing it now, less content to let it be effortless. Mitchell's production is more of a problem, though: The sound is thicker now, the band no longer so perfectly tentative, and that magic space that he had carved out for Green's voice has been filled in, leaving everything sounding crowded and constricted.

Still, now that I've adjusted my expectations, it's a pleasure to hear this amazing team at work again. "I Can't Stop" will not bring Al Green back to the top of the charts. It will not revive his reputation as the greatest of the smooth soul singers. But I hope it will remind people of the music he used to make, prod them into exploring beyond the obvious splendor of "Let's Stay Together." If so, they will find some of the most dazzling overlooked treasures of popular music. There are few pleasures in life more intense than to have Al Green whispering in your ear.