How much is that doggie in the browser window?

Pets.com and its deluded ilk have gone the way of used kitty litter, but online animal rescue and adoption centers are thriving. 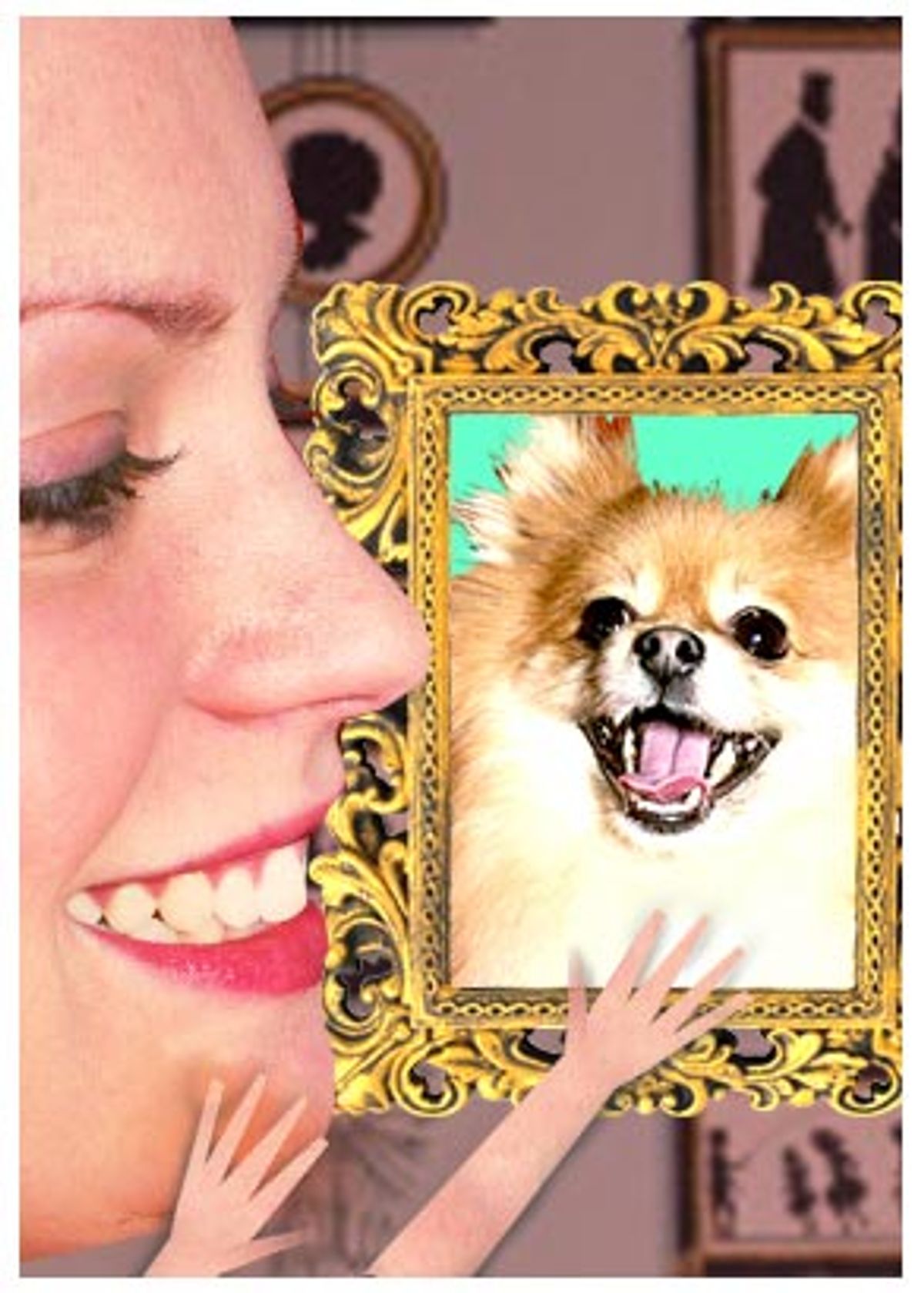 When Bethann Billings went looking for a second dog this September, she knew what she wanted: a large, mellow, male dog who would show "a little respect" to the older bitch who rules her family's home in El Cerrito, Calif.

She, her husband, Alan, and their 10-year-old son, Ian, visited local pounds and shelters without success.

"We'd go to the pound, and they'd have only pit bulls," she says. "It's pretty depressing to go there." But Billings, a sales manager for the San Francisco Bay Guardian, also cruised the pet profiles on rescue Web sites at her desk at work: "I had all my rescue organizations bookmarked: Milo Foundation, Home at Last, Second Chance in Marin.

"One day I was just searching, and I saw the face," she gushes. The photo grabbed her, but the profile clinched it. "It's like a personal ad," she says: "'Big mellow boy would be a great dog for people with children. Would know how to play, but knows how to be calm when playtime is over.' That's what really got me. And it's true."

Today, two-thirds of the animals adopted from the network of 200 volunteers that make up Hopalong Animal Rescue in Oakland, Calif., first meet their new owners on the Internet, says Rosalie Brown, the nonprofit's development director. Between July and September of this year the San Francisco SPCA attributed 95 adoptions to wannabe pet owners first seeing the animals on the SPCA's Web site, says webmaster Karen Jaffie. The Internet has also been a factor in more than 50 percent of the pets adopted from the Brooklyn Animal Resource Coalition in New York.

During the dot-com bust, the superheated race between Pets.com, Petstore.com, Petco and Petopia to dominate the online pet portal space became an easy target for anyone who wanted to skewer the delusional, hyperbolic giddiness of the Internet boom. Pets.com alone spent millions of dollars promoting a sock puppet.

None of the sites succeeded, despite hundreds of millions of dollars of capital infusion. But the Internet chugs along, and today, on the quieter nonprofit side of the pet industry, where strays are rescued and cared for by self-professed "foster parents," the online pet marketplace just keeps heating up. That late-'90s fantasy that venture capitalists, dot-com CEOs and investors could get rich sending 50-pound bags of dog food across the country, while losing money on shipping costs with every order, is no more. But the Web is turning out to be pretty useful if you're interested in finding an actual live dog near you that's "not too bright, but 80 pounds of love," as Billings describes her new pooch -- Jabba da Mutt.

Small shelter groups that don't even have a facility to showcase their animals are the outfits relying most heavily on the Web, giving the idea of the "virtual storefront" a whole new impetus. "The Web site is our main way of adopting out animals," says Astrid Dahlman, rescue coordinator for Home at Last Rescue in Berkeley, Calif. She used to place animal ads in newspapers, but no longer.

Hopalong Animal Rescue is currently caring for 140 cats and 48 dogs. The center used to rely on "mobile adoption events" at fairs and festivals as the primary means of finding new owners. Like many rescue groups that accept strays before they are euthanized from pounds or shelters, the small organization doesn't have a facility where would-be pet owners can come to meet the animals. But over the last few years, listings on Petfinder.com, Virtual Pet Adoptions and Hopalong's own home page have inspired most new adoptions.

Veterans of the online human personals scene will recognize some similarities. For instance, the photo that accompanies a pet's profile is crucial.

"I don't know anyone who will take a pet sight unseen. You fall in love with the picture," says Hopalong director Brown. "There've been times when we've gotten 50 applications for one puppy."

The adoption trade has led to the rise of a whole new subgenre of animal photography. Animal eye contact is inviting, but with cats that can be hard to achieve. There's also an art to making a dog look friendly, instead of an aggressive monster about to take a bite out of the camera.

"Some dogs look really cute with their tongue out, but on some dogs that can look menacing," says Virginia Tiger -- yes, that's her real name -- the "virtual pet adoptions associate," for Virtual Pet Adoptions. Virtual Pet Adoptions features pets from San Francisco East Bay shelters and pounds, and lets visitors sort by age, gender and activity level. But it purposely doesn't let them search by breed, in order to give ordinary mutts a chance.

"We wanted to give you the same experience of walking into the shelter," says Mark Witriol, head dog-food taster -- his real title -- for Petfood Express, a local pet store chain that developed the site along with the East Bay SPCA. "Because a lot of times people end up adopting a dog that they weren't looking for." The site discreetly does not mention which animals will be euthanized by animal control if no one adopts them in the next 24 hours.

The fact that a person is unlikely to be euthanized if no one cares to respond to his or her personal ad isn't the only difference between online pet personals and the human scene.

"Unlike online dating, it's first-come, first-served," says Kirsten Park, director of marketing for the East Bay SPCA. "The first qualified family who comes in will get that dog or cat. That's where the comparison ends."

And surprisingly, it's often the "special-needs" cases that spark the biggest outpouring of response: "We just had one at the SPCA -- a cat that only had one eye. It was only on the adoption site one hour," says Tiger. "There was [also] a three-legged kitten that people were fighting over to adopt."

She attributes this phenomenon to an overflow of "that nurturing, let me take care of you, oh you poor thing, this animal needs me" sentiment -- something humans seem to lavish on animals a little more than on members of their own species.

Cuteness definitely sells, but sometimes the more woeful the picture, the greater the animal's chances of being chosen. "From a marketing perspective, it's pretty effective to look sad and lonely," says Betsy Saul, the president of Petfinder.com, which is the ABEbooks of strays, serving up a huge database of animals from 6,500 organizations around the country, with some 132,200 currently listed.

Saul says that "the ones that are really pathetic -- the dogs looking woefully from behind bars" -- inspire that "'I have to save you'" response. So, while some small shelters worry that their volunteers don't have the time to take the animals out of their cages and pose them, she always advises: Just take the picture.

As for the profiles, there may be less fibbing than on most online dating sites, since shelter volunteers know that a Siamese cat whose incessant caterwauling goes unmentioned may end up back at the pound in a few days. "We really try to talk up their good qualities as much as possible, but you have to be honest," says Vinnie Spinol, a vice president at Brooklyn's BARK.

In a pet profile, keywords such as "friendly," "affectionate" and "social" are as common as "fun," "easygoing" and "sincere" in online-dating profiles for humans. Tiger, who has written more than 500 of these profiles based on information from volunteers and on her own observations, says: "People want to connect with something. They're looking for a companion, so I try to use really positive words."

Positive can blur into euphemism -- a paunchy dog is "dignified," like Osh, a 70-pound German sheperd mix in Fremont, Calif., who enjoys going on "short walks": "We are working on Osh's weight which should be under 60 pounds," the site apologizes. And Gloria a "perky ball of energy," who is an American shorthair, tabby mix, "can be taught to chew on toys instead of you." Translation: a bit of a biter, but not a lost cause.

Unfortunately, the genre seems all too accommodating to cutesy-poo hyperbole, as praise for one cat's "Bette Davis eyes" suggests. Another feline, a New Jersey female cat, Princess Buttercup, speaks in the treacly first-person about her desire to find a home with lots of "handsome older male cats -- yum!" (She's been altered.) There's even a black cat, Mr. Chips, that's billed, inexplicably, as a good luck charm because he has "lots of extra toes."

In her part-time job, Tiger drives from shelters to animal control facilities in the East Bay, profiling a broad range of animals, including rats, iguanas, rabbits, guinea pigs and dwarf mice. Tiger, like many an online pet sector employee, lost her job in advertising in San Francisco during the dot-com bust. But she took the change in employment status as an opportunity to start volunteering for the East Bay SPCA, a position that ended up turning into a job photographing, profiling and updating the Web site.

She's not the only dot-com refugee to be found in the online pet world. Jaffie, the webmaster for the San Francisco SPCA, says that she started volunteering after being laid off during the bust by her employer, a Web design shop.

Petfinder.com, which started in 1995 as a small, bootstrapped company built by Betsy Saul and her husband, Jared, a programmer, was struggling to make a profit in the boom years when Pets.com and Petopia came calling.

"They all said to us: We're going to buy you or build you. So, you better sell out," remembers Saul, laughing now at the hubris. Today, Petfinder, which didn't accept any venture capital investment, has 18 employees -- all of whom work from home -- and last year was involved in the adoption of more than a million pets. Meanwhile, the ambitious pet portals of dot-com years past are no more than an obscure footnote in the annals of Internet folly.

But, paradoxically, Dahlman from Home at Last Rescue now thinks that the ubiquity of online pet profiles may be flooding the market. "Once all the Web sites started, things got pretty competitive," she says. "Every rescue group has its own Web site now. I feel like in some ways it's gotten a little harder to place dogs."

With so many mournful hounds gazing out from your browser to fall for, so many "friendly" and "affectionate" cats, who can decide which pet is The One?