Crime-fighting Ents, the Iggy Pop-Gollum connection, Aragorn's love for a transvestite, and other delights lurk within this ragged, messy extended-edition DVD. 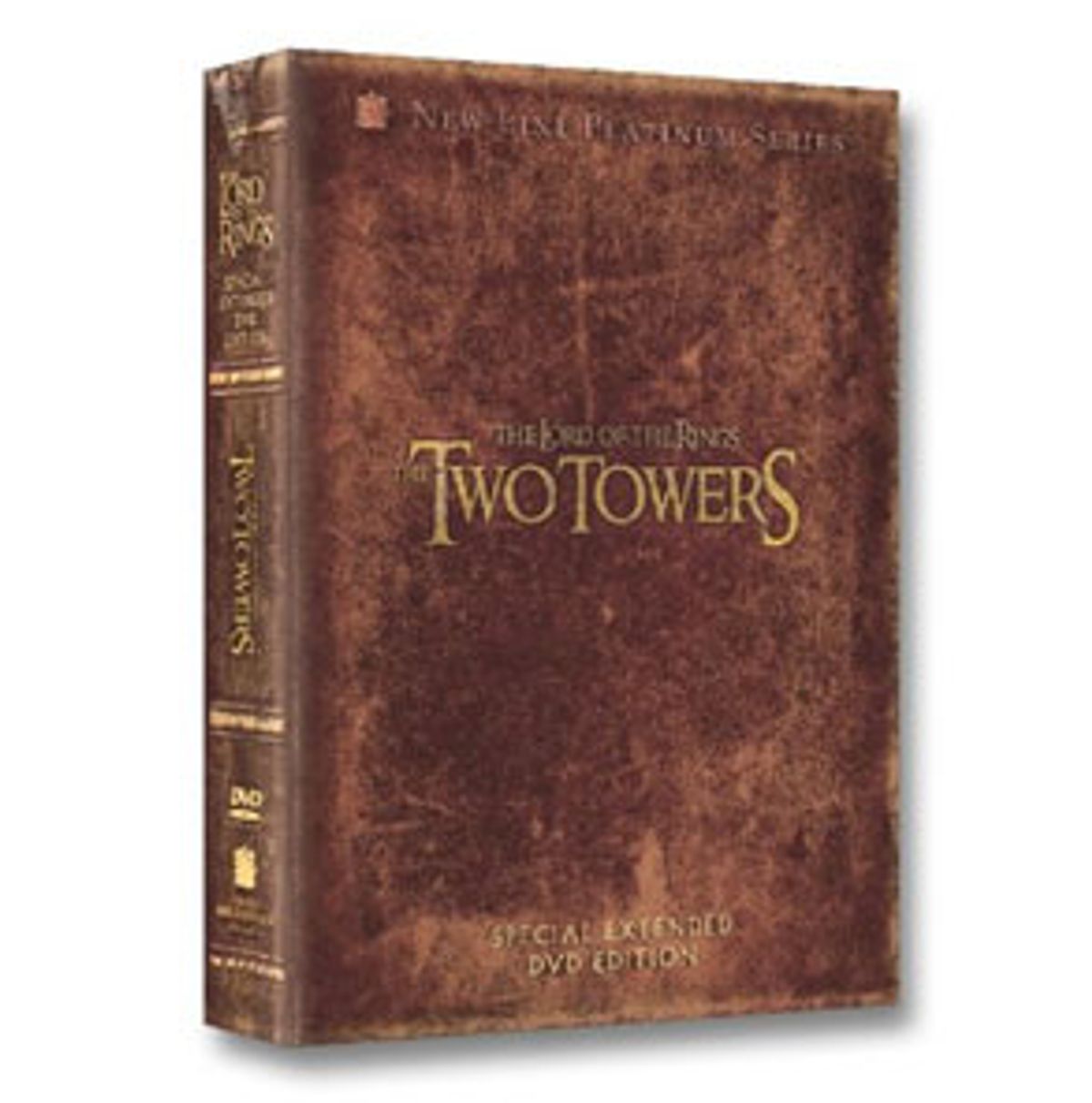 "The Two Towers" was always going to be the problem child of Peter Jackson's film trilogy of "The Lord of the Rings." Like the book, the movie exists as a separate work mostly to keep either the first and last parts of the narrative from being too long. Not only is "The Two Towers" the middle of the overall story (J.R.R. Tolkien conceived of "The Lord of the Rings" as a single novel), it's the middle of three smaller stories -- the narratives following the fates of the Fellowship's members after the group splits up. It has no obvious dramatic climax of its own.

Though somehow you don't expect the creation of the movie to have been that sort of experience -- a bit of a slog, without the exhilaration of a beginning or the satisfactions of a conclusion -- for the filmmakers. Yet, it was, as anyone can tell from paying close attention to the hours of documentaries and audio commentary included on the DVD of the extended version of "The Two Towers." Between the lines of the usual encomiums to the geniuses and 110-percenters everyone worked with, you can detect a back story of spats, quarrels and knock-down, drag-out fights. (The question of how to animate Gollum is the controversy most frankly discussed.) Ultimately resolved, of course, but still.

By contrast, the DVD of the extended version of "The Fellowship of the Ring" is positively giddy -- with the fresh thrill of success and the bedazzlement that comes between the conceiving of a glorious plan and the actual execution of it. At some point amid the additional material on this DVD, someone (I think it's co-screenwriter Philippa Boyens) says the theme of "The Two Towers" is "holding on," a principle that was called for on both sides of the cameras.

Not that the film doesn't work, even if it does lack the road-movie momentum of "Fellowship." Besides the spectacular battle sequence at Helm's Deep, there are a handful of fine performances by top-drawer actors in supporting parts, parts that, paradoxically, give them more to chew on than the leads get. "The Two Towers" is the film that really tests the dramatic ingenuity of the trilogy's screenwriters (Boyens, director Peter Jackson and his wife, Fran Walsh) and the film in which their chosen strategy comes into focus.

In each of the films so far, within the larger story of the quest to save Middle-earth, there's a complete subplot about a man who must rise to his own role in the epic. In "Fellowship," that man fails; the narrative arc in that movie is the tragedy of Boromir and his gradual surrender to the power of the Ring. In "The Two Towers," it's the restoration of King Theoden. Both parts provide a Shakespearean ballast to the high-flown elements of Tolkien's fantasy, and both are perfectly cast. Sean Bean makes us feel the bewilderment of a strong, good man who discovers too late the weakness of his humanity; Bernard Hill's Theoden slowly awakes from stuporous despair into the full flower of his kingliness, a state of authority so ideal (and so beautifully embodied by Hill, with that regal expanse of forehead) it rivals that of Shakespeare's Henry V.

Then there's Brad Dourif's serpentine Grmma Wormtongue and Miranda Otto's slowly thawing Éowyn. Everything having to do with Rohan -- from the spectacular Edoras locations and set to the courtroom intrigues in Meduseld to Theoden's rally at the brink of what he believes to be his defeat at Helm's Deep -- works so well in "The Two Towers" that it nearly overshadows the other two story lines. (Except for Andy Serkis' revolutionary animated performance as Gollum, of course.) Yet for most readers of the books, the opposite holds true: Frodo, Sam and Gollum trudging along the grim path to Mordor and Merry and Pippin's larkish interlude with Treebeard are the most memorable parts of the second book. One of the pleasing aspects of Jackson's adaptation is the way it gives what once seemed like minor stories such emotional weight.

But that also makes it hard to judge the value of an extended cut of a film like "The Two Towers." The DVD includes even more added footage -- 43 minutes -- than the extended cut of "The Fellowship of the Ring," but only one sequence strikes me as absolutely essential: a bit of back story on Faramir that sets up his father's preference for his brother Boromir (more Sean Bean!) and makes him less of a cipher. On the other hand, some of those 43 minutes depict my favorite parts of the book: Merry and Pippin drinking Treebeard's ent drafts, frolicking in Saruman's storeroom and, in a nod to the missing Tom Bombadil, getting trapped in the roots of a wicked tree. Also, I was delighted to see in this long version the moment when Saruman's army, retreating from Helm's Deep as Gandalf and Éomer attack their left flank, are forced into the vengeful forest that has just relocated itself at the entrance to the gorge.

Nevertheless, this movie doesn't need to be almost four hours long (and it really doesn't need that goofy scene of Aragorn politely pretending to enjoy the stew that Éowyn has made in an atypically maternal moment). There's also the impression of slightly flagging enthusiasm in the DVD's lavish array of extras; fewer actors participated in the cast commentaries, for example. A short documentary on the influence of Tolkien's World War I ordeals on his writing still manages to feel like news, though it could do without author Tom Shippey going on about how Tolkien tried things no "professional writer" (whatever that means; Tolkien had already published a successful novel in "The Hobbit") would attempt.

And even if this DVD sometimes seems capable of grinding the completist out of any Tolkien/Jackson fanatic (audio commentaries from writers/director, cast, design team and the production/post-production team -- whew!), the irresistible tidbits that slip out every so often made me want to hold on. There's the fact that the 1964 movie "Zulu" inspired Jackson's conception of the siege at Helm's Deep; that costumers put the golden seal of Rohan inside Theoden's costume where only Bernard Hill and his dressers could see it; that it was hard to design saddles for the hyena-like Wargs because carnivores have flexible spines unlike the straight spines of horses; that Iggy Pop was one of the models for Gollum; that some of the Uruk-hai and a lot of the Rohirrim riders were played by women; that the filmmakers nicknamed the Isengard model "the pizza."

The commentaries also feature some pretty good jokes: Billy Boyd and Dominic Monaghan, who play Pippin and Merry, do a hilarious parody of the fulsome praise for the "little people" usually found in such tracks. Over some CGI shots of Orcs tramping over a bridge to Barad-dûr, they start talking about the cast of ants who played the Orcs, and did you know that they'd agreed to have four of their legs and their antennae removed for the scene. "It just shows the passion and the commitment," Boyd says with mock piety.

In their commentary, Walsh, Boyens and Jackson, apparently nearing the end of their polite tolerance of the meddlesome, scolding side of Tolkien fandom, start kidding around about giving courses on "criminal screenwriting," called "Crimes Against the Book 101." Later, lamenting the cutting of some Treebeard scenes and declaring the Ent to be his favorite character, Jackson says he wants to make a spinoff TV series set in Fangorn Forest. "Nothing happens ... or I could make Treebeard a kind of crime-fighting tree who solves mysteries in Fangorn. He just doesn't do it very quickly."

That's the upside of a DVD made by a bunch of artists who are running low on their initial surge of adrenaline and gathering their strength for the final stretch: They're punchy and unguarded. You catch intimations of the friction that can contribute as much to the creative process as harmony does. And you get let in on silly extended jokes like Monaghan tattling on Viggo Mortensen's supposed infatuation with one of the transvestite Rohirrim and Mortensen's deadpan rejoinders. Compared to the long cut of "The Fellowship of the Ring," the extended DVD of "The Two Towers" feels a little less polished, quite a bit more frazzled and maybe just a shade more real.