Call them Deanheads: Supporters turn out by the thousands, ready to chant along to their favorite lines. But from the stump, the candidate is trying to expand his playlist. 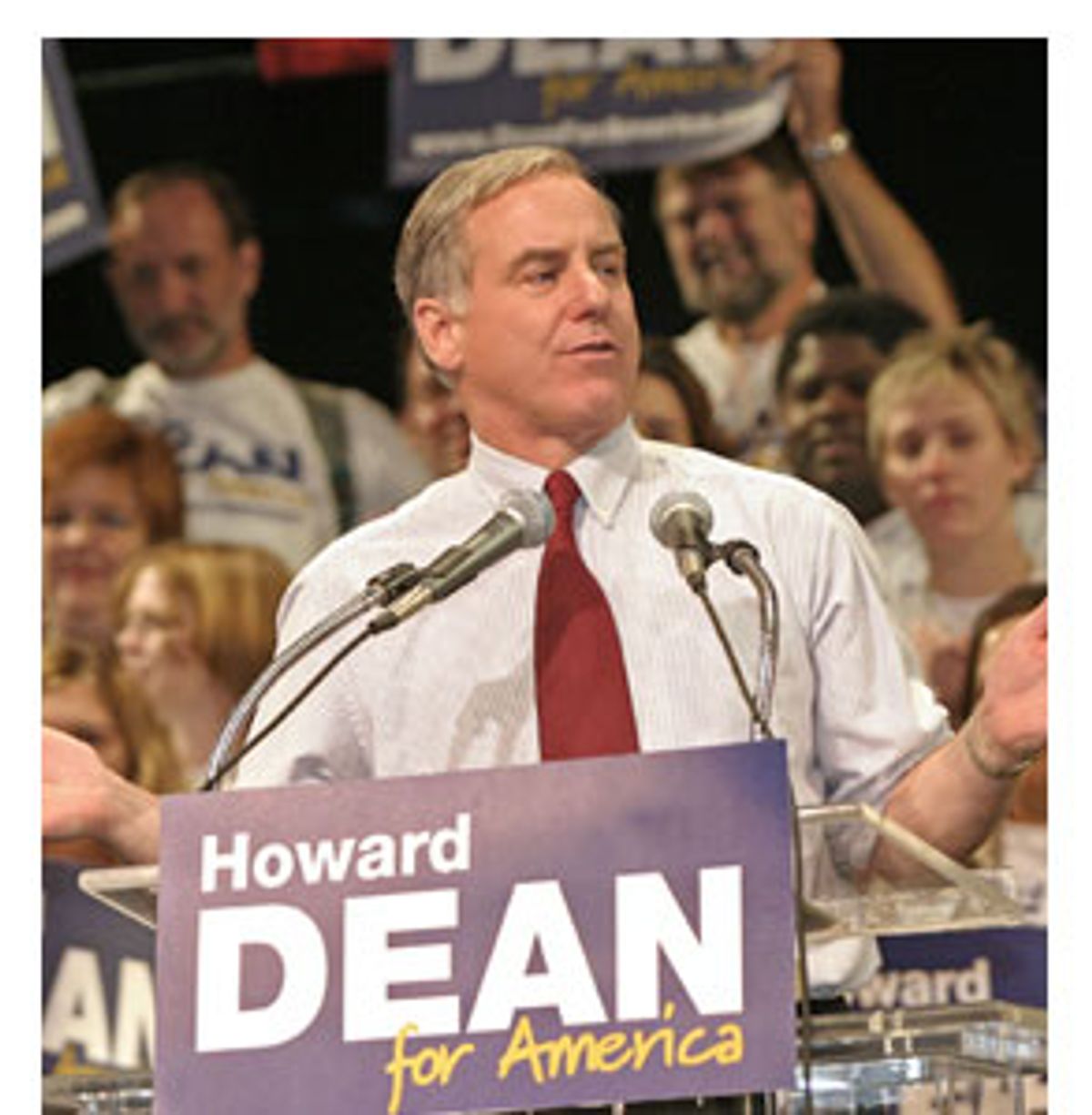 Larry Woods, a big, blond, middle-aged Texan, had been to see Howard Dean several times before, but was better known to many of the other Dean supporters milling around Houston's Miller Theater on the evening of Nov. 18 by his Web name, "Larry in Austin." Meredith and Avery, who, like Larry in Austin, had covered themselves in Dean paraphernalia for the occasion, proudly wore badges labeling them "Texas Rangers," a term reserved for those fans who had traveled to Iowa and New Hampshire by the hundreds back in September to knock on doors for Dean.

It sometimes resembles a Grateful Dead show: legions of traveling fans turning up, knowing most of what is about to happen -- Deanheads are all able to recite their favorite lines from his usual stump speech -- and hoping maybe for some, though not too much, variation in the playlist.

"I didn't know anything about Howard Dean before I saw him for the first time this summer," said Woods. "But after that, I starting going to the Meetups, and I started sending in money every month. It's been pretty exciting."

What most of the supporters assembled in Houston didn't know was that the day had been an unusually trying one for Dean. En route to Texas from earlier campaigning in New Hampshire, he had given a cursory statement to reporters that the remains of his younger brother, Charlie Dean, appeared to have been discovered in Laos. Charlie had disappeared in 1974 with a friend on an excursion through Indochina; he was presumed to have been captured and executed by communist rebels. Dean, who rarely talks about his brother but wears Charlie's old belt as a reminder, said, "This has been a long and emotional journey for my mother, [brothers] Jim, Bill and me. We greet this news with mixed emotions but are gratified that we may now be approaching closure to this painful episode in our lives."

The campaign pressed on to Texas, though, where Dean delivered a speech in front of the hardened supporters in Houston, and attended a fundraiser afterward at a nearby hotel.

Dean was introduced at the 1,500-seat open-air theater by Rep. Sheila Jackson-Lee, D-Texas, who became the fourth new member of Congress in a 48-hour period to jump on the campaign bandwagon. Her endorsement will help Dean by addressing two perceived weaknesses of his campaign: his lack, at least initially, of African-American support, and his relative weakness in conservative Southern states. It was also another indication that the campaign was reaching critical mass among Democratic officials who had remained uncommitted in the presidential primary -- in New York, for example, the campaign is set to announce endorsements by a string of prominent local officials who had been leaning toward other candidates until as recently as a week ago.

Dean also used the opportunity to try out a new speech, which he read from notes at a podium onstage; its theme centered on America's potential, and his plans for improving the economy and for pursuing the war on terror. With some Democrats still wary of a Dean candidacy hinged to an antiwar position, the speech might be a step toward advancing a more positive message to appeal to a broader audience. "We will build a better world by building a better America," he said. "We deserve a better leadership."

He questioned the Bush administration's commitment to seeing through the rebuilding of Iraq, drawing less-than-thunderous applause from the supporters who had rallied to his strident, early opposition to the war. Dean stressed the need for a multilateral force to help get Iraq up and running again. "It must be rebuilt," he said. "We can't pull our troops out on Karl Rove's timetable."

He also took advantage of the venue location -- Miller Theater is, not coincidentally, just down the road from the headquarters of Enron -- to highlight the administration's close relationship with "Kenny-boy Lay" ("George Bush pretends he doesn't know him anymore," he said) and to pledge that he would spend time campaigning in Texas in next year's general election. (This was something of a revelation to the capacity crowd, which, to judge by the GOP's current dominance in Texas, must have represented a good percentage of the state's Democratic voters.)

As often happens at concerts with a hardcore fan base, the new material was tolerated, and even applauded, but the crowd saved their cheers for the tried-and-true hits that they knew by heart. They only came alive toward the end, jumping out of their seats each time Dean hit one of his more-familiar Bush-bashing notes:

On the PATRIOT Act: "This flag doesn't belong to John Ashcroft, Rush Limbaugh and Jerry Falwell!"

On affirmative action: "The president played the race card, and that alone entitles him to a one-way ticket back to Crawford, Texas!"

On not being wimpy liberals and "standing up" to the Bush administration: "You have the power to take this country back!"

At the fundraiser afterward at a nearby hotel, Dean arrived shortly after most of the guests, took the stage, and gave another rendition of his stump, much of which the attendees had just heard an hour earlier. They didn't seem to mind.

Larry Woods was there among the suits and ties, still in what he calls "walking billboard" mode complete with his Dean T-shirt and anti-Bush buttons. Asked how he rated that night's performance, he had to think for a moment before delivering his verdict: "Well, the first three-quarters was all new stuff," he said. "But I just love it when he gets all serious ..." He demonstrated by hunching his shoulders, furrowing his brow and ramming one of his arms forward toward an imaginary audience. "I mean, I used to be a high school band instructor," he said, still scowling, "projecting yourself and all that. I just love it when he does that."