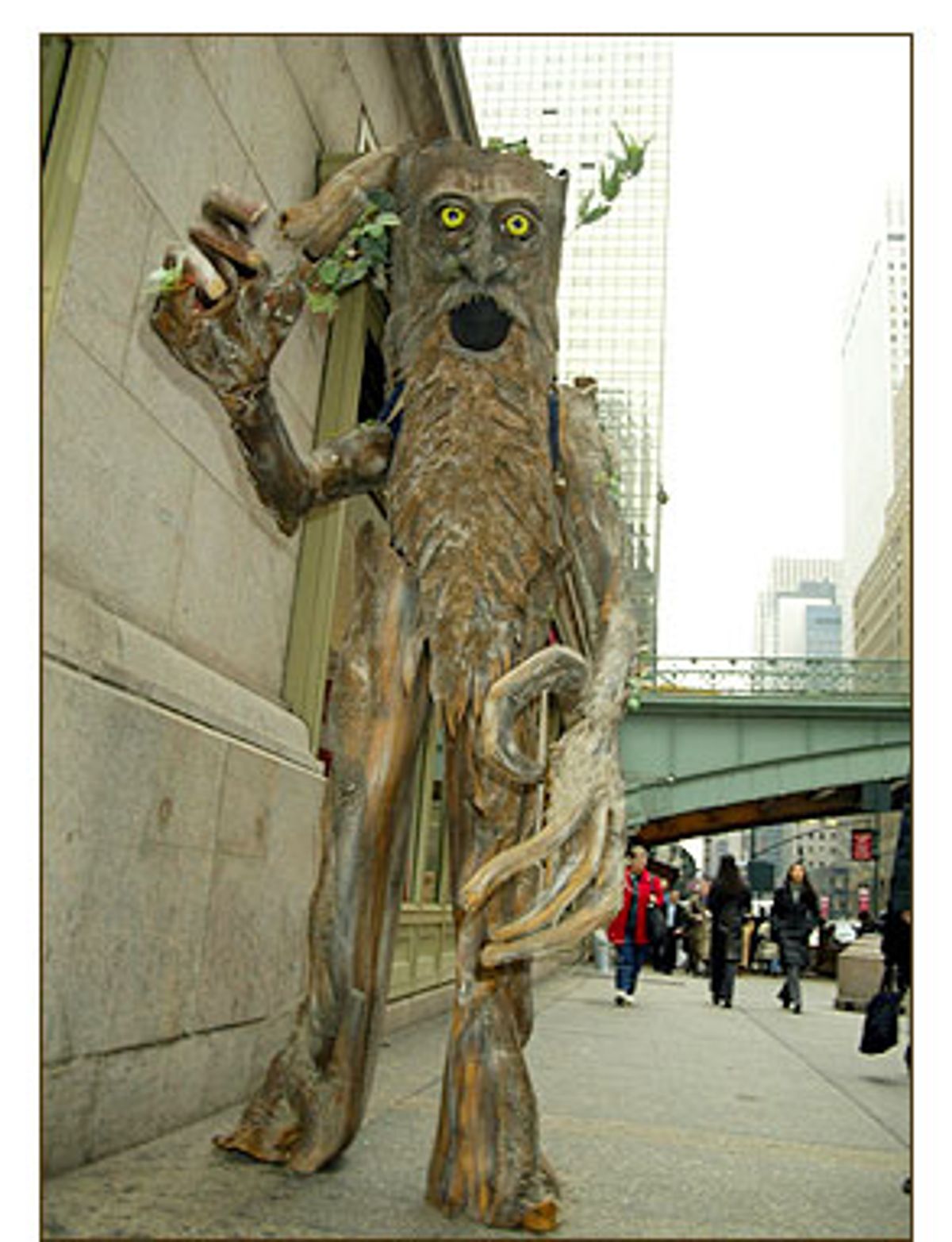 It was 11:45 a.m. outside Grand Central Terminal in Manhattan, and the Ents were AWOL.

Two of the Shepherds of the Trees who inhabit J.R.R. Tolkien's Middle-earth were supposed to be roaming New York sidewalks on Tuesday as part of New Line Cinema's celebratory release of "The Two Towers" on DVD.

The merchandising stunts surrounding the three installments of the "Lord of the Rings" trilogy have all been dreamily nerdy exercises in Tolkieniania. Two years ago, publicists gave out surprisingly heavy Rings of Power, embossed in letters of the Black Speech, to reporters attending a pre-Oscar "Fellowship of the Ring" lunch. I still carry mine. Last year, at the New York theatrical premiere of "The Two Towers", dissolute-looking Calvin Klein models stood on the snowy steps of the New York Public Library, holding lanterns and posing as sulky Elves.

But Tuesday's DVD launch promised to break all records for hobbity eccentricity.

"Ride the 'Middle-earth Shuttle'!" crowed the press release, which promised that "The Shuttle train's cars -- replete with Middle-earth creatures, vines, moss and stones -- will carry commuters from 11:30 a.m. to 1:30 p.m." The shuttle in question runs back and forth between Grand Central and Times Square with no intervening stops. It's one of the Metropolitan Transportation Authority's most no-nonsense lines, designed to transport commuters efficiently and without fanfare from one transport hub to another.

The release continued, "Brave travelers will have the opportunity to explore the Middle-earth-themed subway station, accompany Gollum back and forth, stand tall with 12-foot-high living Ents and much more!"

Grand Central seemed an unlikely place to find the slow-moving Ents, who make their home in Fangorn Forest in the foothills of the Misty Mountains. The thought of bumping into one outside the Banana Republic at the corner of 42nd Street and Vanderbilt Avenue was deliciously improbable.

And so it was sad but not altogether surprising that even with the help of an eager companion, I could not spot a single walking tree-guardian on the corner where we had been promised a meeting before our descent to the Middle-earth Shuttle.

A woman pressed fliers advertising the event into our hands.

"Have you seen the Ents?" we asked her urgently.

"What, you mean the tree people?" she replied. "Yeah, they might be over there." She threw a hand in the air, indicating a western stretch of sidewalk.

There were definitely no 12-foot Shepherds of the Trees on that block.

The Middle-earth Shuttle was really just one car on one of the four trains that zoom back and forth across midtown Manhattan, and by the time we had navigated the warren of subway tunnels, it had just pulled away.

But we got to await its return amid the platform decorations, which at first seemed to consist of some twigs wrapped around the middle pillars.

But then I spotted them -- two low display stands, each bearing a life-size sculpture of a stooped Gollum.

"Come, Master, we will take you on safe paths through the mist," hissed Andy Serkis' recorded voice.

I shivered with pleasure.

"I am getting unnerved by this nonsense!" said a female transit cop. Moments later she stuffed two of the giveaway copies of the "Two Towers" DVD and a limited-edition Master of Fangorn medallion into her shoulder bag.

The New Line publicist on the platform promised to track down the aboveground Ents just as the Middle-earth shuttle pulled in and disgorged a number of confused-looking passengers. My friend and I hopped on.

Green fluorescent light emanated from the overhead panels as the movie soundtrack played. Brown burlap hung from the ceiling. The train floor was covered with some paste-on flagstones, and every one of the seats had been plastered with green leafy contact paper. Best of all, on the end of each row of plastic seats there was a Gollum figure -- waxen and squatting.

Could the daily experience of urban dwelling be more poetically brought to life than through the act of boarding a subway car and hunkering down next to Gollum?

"There's an Ent at 42nd and Vanderbilt right now!" bellowed the New Line publicist from the platform. And that's all it took to convince us to bid farewell to the Shire and return to the streets where, as promised, a slightly bowed tree was embracing pedestrians outside Banana Republic.

The Ent was actually a man on stilts, inside a craggy foam-rubber costume. He was flailing his platter-size stick hands, which featured a mossy wart, and walking -- slowly -- with a spotter, who was actually another publicist.

"It's me and the Ent on 42nd Street," the publicist said into a cellphone. "Yeah, we had some problems with the Ents being too tall and stuff, but I'm here with one now, and the other one is just further down on 42nd."

Sure enough, in the distance I saw a second creature towering above the pedestrian traffic. This was exciting. This wasn't just an Ent. This was an Entmoot.

And the passersby -- those who weren't rolling their eyes -- were eating it up. At least three women, looking tiny next to the Ents, threw themselves into the foam rubber paws. Men shook their hands, awkwardly. Children laughed and touched the rubbery bark, although several seemed to be under the impression that these might be the talking trees from Oz.

The whole thing was gleefully geeky. It reminded me of what a weird victory these three holiday seasons have been for the Tolkien nerds among us -- those who never thought they'd see their precious Middle-earth embraced by the MTA.

I was even humming Gollum's little song -- which I do not know by heart, though a couple of my former co-workers do. In my head, it went something like this:

Mmmm. The Oyster Bar at Grand Central. It was time for Elevenses.