On inauguration day the new governor made nice with Democrats, but feminists still want a sexual-assault investigation and the right remains suspicious. 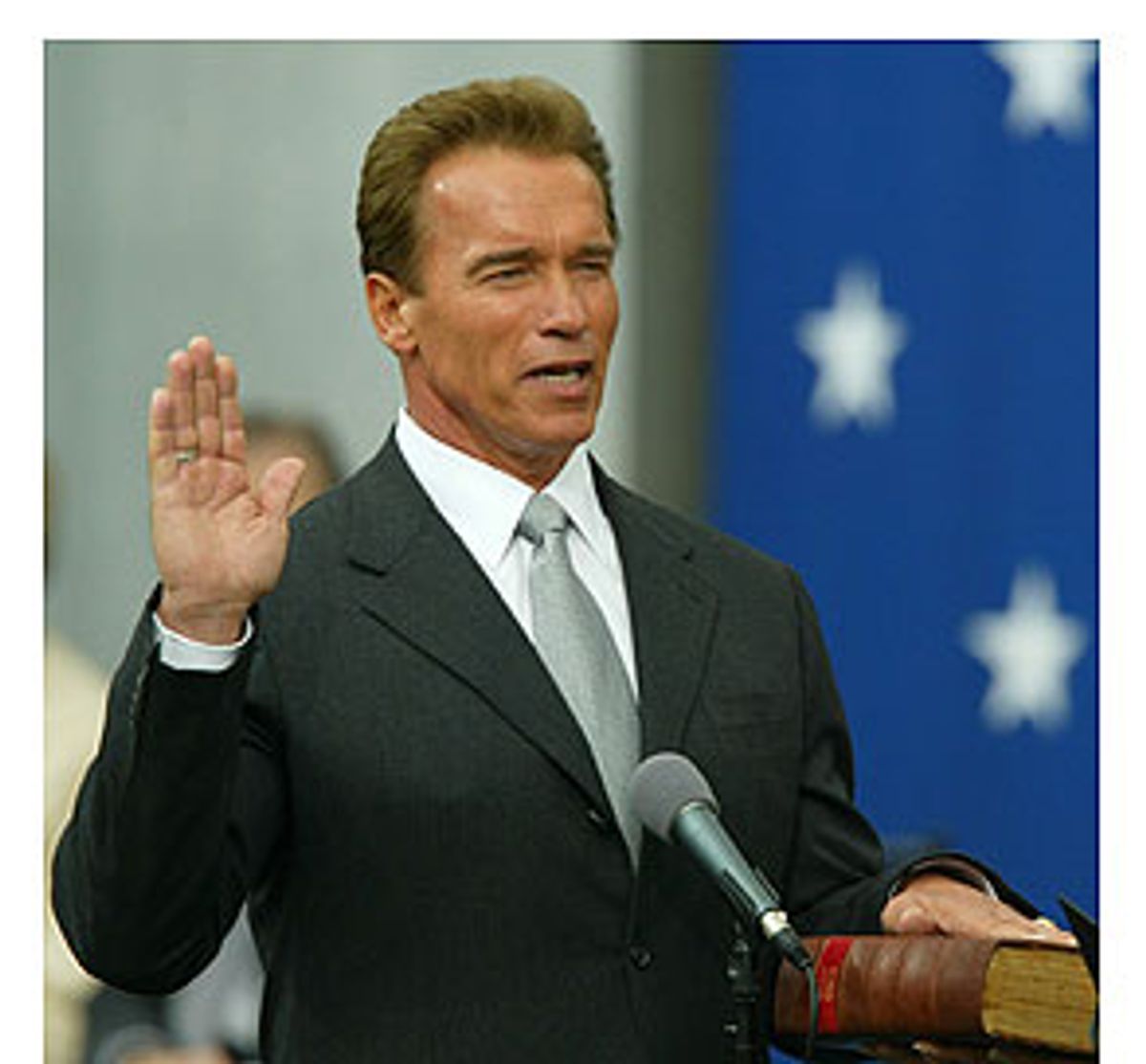 In an interview on the just-released DVD version of "Terminator 3," Arnold Schwarzenegger raves about a "fantastic" scene from the film in which a female machine pumps up her breasts in order to distract a cop.

In screenings for "T3," Schwarzenegger says, "You saw women sitting there, telling each other, 'Now that's a great idea. I've got to check out where you get that done.' So you can deflate and inflate your breasts on command. It's a whole new concept. Because there's some guys who like little breasts and some guys who like big breasts. Wouldn't it be nice if you could play both sides, sometimes even simultaneously?"

Schwarzenegger is about to find out. The Austrian-born actor was sworn in Monday as California's 38th governor, and he is already exploring the high-risk game of "playing both sides" in the slightly less titillating world of partisan politics, where he probably won't have time to create and market his amazing hooter-tooter. As Schwarzenegger took the oath of office in Sacramento Monday, Republicans watched for signs that he is the tough-minded fiscal conservative they hope he is, while Democrats and progressives waited -- with more than a little skepticism -- to see if he's the compassionate friend of the environment and "champion for women" that he promised he would be.

"People are saying, 'Let's hold our breath,'" said Mark Williams, a Sacramento radio talk show host who used his nightly program to push hard for the recall of Democratic Gov. Gray Davis. "They're worried that, after the heavy lifting of fixing California's budget, his liberal social agenda will come into play."

At the other end of the political spectrum, progressive Andrea Buffa -- who led a group of CodePink feminist activists protesting at the inauguration Monday -- said she is worried that Schwarzenegger will cut women's and children's programs to solve the state's budget crisis. "Because of everything that happened during the campaign, Schwarzenegger promised that he would be a champion for women," Buffa said. "We're here to say, 'We heard you and we're going to hold you to that.'"

Schwarzenegger was elected last month in a Republican-initiated and Republican-funded recall drive that ousted Democratic Gov. Gray Davis from office just 11 months after he had been elected to a second term. But immediately after the election, the governor-elect began working to position himself as the man in the middle of a nonpartisan revolution aimed at ending "business as usual" in Sacramento.

That effort -- which began with a transition team that spanned the political spectrum and continued with Cabinet appointments that crossed party lines -- culminated in a "we're all in this together" inauguration Monday. Schwarzenegger's wife, Kennedy cousin Maria Shriver, read poetry from Maya Angelou, who read her own work at Bill Clinton's first inauguration. And in his brief inaugural, Schwarzenegger managed to quote both Ronald Reagan and John F. Kennedy in the course of promising to serve Californians of every political persuasion.

"This election was not about replacing one man; it was not replacing one party," Schwarzenegger said as a seemingly gracious Gray Davis looked on. "It was about changing the entire political climate of our state. The election was the people's veto for politics as usual. With the eyes of the world upon us, we did the dramatic. Now we must put the rancor of the past behind us and do the extraordinary."

But "extraordinary" doesn't even come close to describing the challenges that Schwarzenegger now faces -- many of them, challenges of his own making. During his campaign, Schwarzenegger promised to balance California's budget -- the state now has a deficit of $10 billion -- while fully funding the public schools. He promised that there would be no new taxes and that he'd repeal an unpopular old one, the 300 percent increase in the state's car tax Davis imposed last year. And he promised to do it all by working together with the Democrats who control the state Legislature.

Schwarzenegger started work Monday by signing an executive order cutting the car tax and talking of cooperation in the days ahead. Democrats welcomed the talk of bipartisanship Monday but warned that they're not ready to roll over for the Terminator.

"I do hope that today is the end of a period of bitter personal recriminations in California politics," California Treasurer Phil Angelides told Salon Monday afternoon. A Democrat who is considered likely to run against Schwarzenegger if he seeks a second term in 2006, Angelides said he hoped that Schwarzenegger's election would bring about a "new atmosphere where politics can be about debating the future of the state."

But Angelides said he expected that debate to be a serious one, especially if Schwarzenegger attempts to balance the budget -- as aides have suggested he might -- by wrapping up the state's current debt in a $20 billion bond to be financed by future generations. In a page straight out of the Ronald Reagan playbook, Schwarzenegger would apparently couple the bond proposal -- which would have to be approved by voters -- with a constitutional amendment requiring that all future budgets be balanced.

It's a play-now-and-pay-later approach, and it has both Democrats and Republicans upset. Angelides said that "asking for a bigger deficit bond and punting the debts to our children and grandchildren" would be the worst possible response to the state's budget crisis. "This would, in a sense, mimic the worst of what George Bush has done -- cut taxes as you maintain spending and run up a huge credit card debt," he said.

And Williams, the Sacramento talk show host, said that talk of floating a bond before making any attempt at spending cuts runs counter to the desires of Schwarzenegger's fiscally conservative Republican base. "Rooting out the waste and inefficiency -- I'd like to see him try to do that first," Williams said.

The budget crisis isn't the only area where Schwarzenegger has to walk a fine line between the parties and his various constituencies. His choice of automobiles notwithstanding -- he drives a gas-guzzling Hummer -- Schwarzenegger put forth an aggressive and progressive environmental platform while running for office. It got little public attention -- fiscal matters, not the environment, were at the center of the race -- but environmentalists were optimistic that Schwarzenegger would be a friend once elected.

Environmental groups hailed Tamminen's appointment, which came over the objections of Republicans in the state Legislature concerned that he was insufficiently solicitous of business concerns. On his return to the air Monday morning, no less a conservative eminence than Rush Limbaugh took time to criticize Schwarzenegger for making an appointment from a "left-wing, whacko environmental group."

But the news wasn't all good for the environmental camp. Schwarzenegger balanced the Tamminen appointment with three others that were significantly more satisfactory to the right. Schwarzenegger named Republican Bill Jones, a former secretary of state who has earned an "F" on one environmental group's scorecard, to serve as head of the California Resources Agency. And to serve as the second and third in command in Tamminen's Cal-EPA, Schwarznegger named a timber company lobbyist and a lawyer who has represented major corporations fighting enforcement of environmental laws.

"We're very pleased that Terry Tamminen was chosen as secretary of the Cal-EPA and we think he'll do a great job," said Sierra Club spokesman Bill Magavern. "Obviously, we wish the undersecretary and deputy who were appointed had not been at odds with the environmental agenda that Schwarzenegger campaigned on."

Magavern called the appointments -- particular the appointment of a timber-company lobbyist to the Cal-EPA -- "exactly the kind of special-interest politics that Schwarzenegger campaigned against."

The Sierra Club wasn't the only group keeping a wary eye out for the influence of special interests Monday. The nonpartisan Foundation for Taxpayer and Consumer Rights -- a consistent critic of Gray Davis when he was in office -- hired a truck to circle the inauguration Monday with a 20-foot sign bearing the Webster's dictionary definition of "special interest." Schwarzenegger struggled with the meaning of the expression during the campaign, ultimately suggesting that it applied only to groups -- like the labor unions and Indian tribes who were backing his opponents -- who would eventually have direct business negotiations with the governor. Jerry Flanagan, who was passing out fliers for the foundation Monday, said he hoped to keep a broader definition in voters' minds.

Flanagan cited the fact that the California Chamber of Commerce, a business lobbying group, sponsored a gala lunch for Schwarzenegger Monday, and that Schwarzenegger had named one of its lobbyists as his legislative director. He also raised concerns that other representatives of industries that had contributed to Schwarzenegger's campaign were finding high-power jobs in his administration.

But, of course, the Schwarzenegger issue that grabbed the most attention at the inauguration was the same one that dominated the final days of his campaign -- allegations that Schwarzenegger grabbed, groped and otherwise humiliated any number of women during the course of his Hollywood career. The issue arose again recently as state Attorney General Bill Lockyer, a Democrat, announced publicly that he voted for Schwarzenegger -- and then called for an independent investigation into the sexual harassment and assault allegations.

A small group of protesters from CodePink and other feminist groups took up the call Monday outside the state Capitol. Buffa, a spokeswoman for the group, said that the issue is still very much alive despite the convincing victory Schwarzenegger enjoyed last month. "The test of the law isn't whether people think it's important or not," she said. "It's what happened and whether he broke the law."

Schwarzenegger supporters appeared to ignore the protesters, and several said the sexual harassment allegations are a moot point now that the election is over. "Who cares?" said Tom Lucas, a nursery owner from Southern California who traveled to Sacramento for the inauguration. "These women never said anything prior to this, and now he gets elected and they come out of the woodwork."

Another supporter standing in line for the inauguration interjected: "It's time to put the bullshit behind us."