I'd love to satisfy my mother and annoy Rick Santorum by getting married to my boyfriend. But I care for him -- and our son -- too much to risk it. 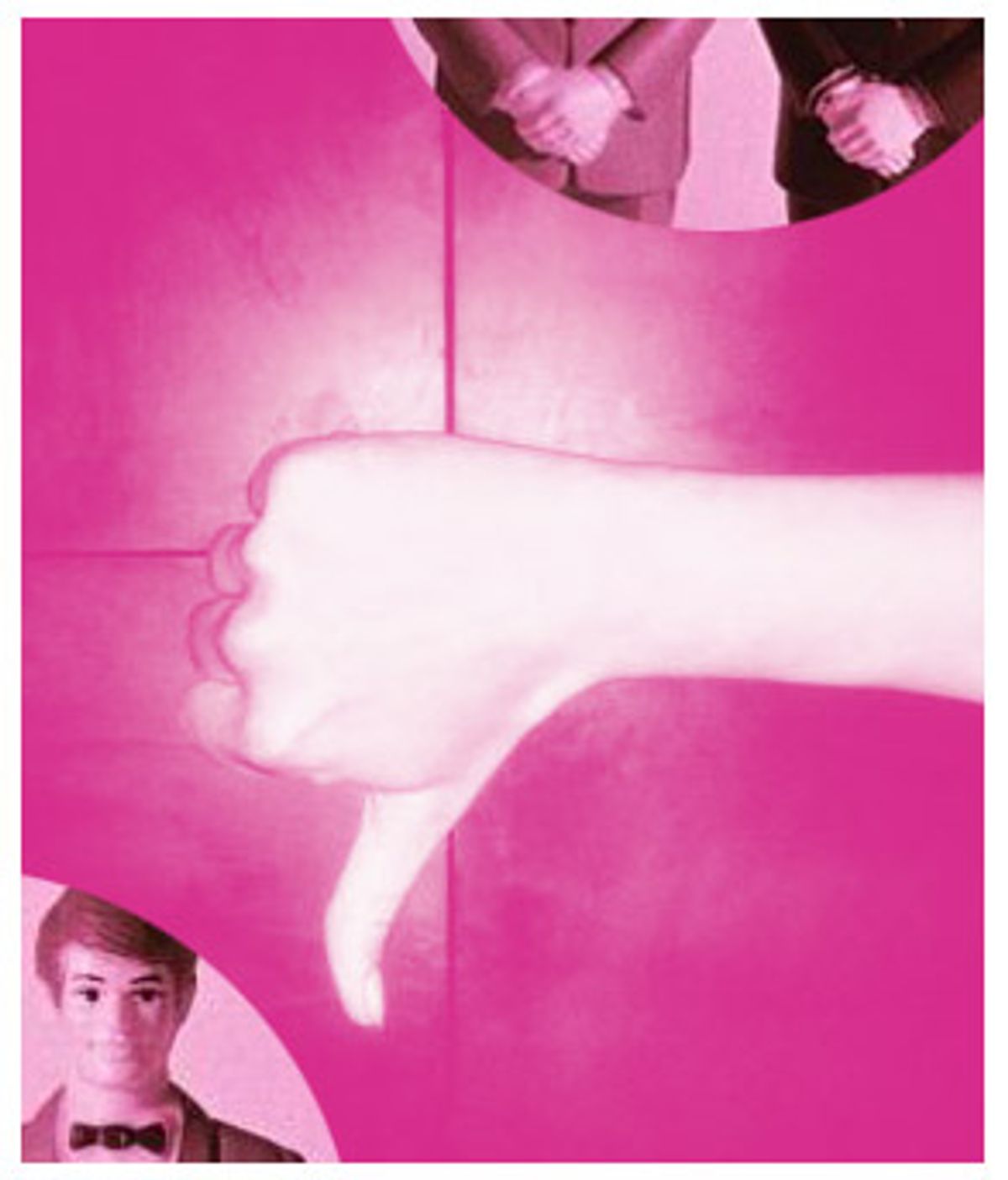 "In this case, we are confronted with an entire, sizeable class of parents raising children who have absolutely no access to civil marriage and its protection ... It cannot be rational under our laws, and indeed it is not permitted, to penalize children by depriving them of State benefits because the State disapproves of their parents' sexual orientation."
-- The Supreme Judicial Court of Massachusetts

My mom has a rainbow bumper sticker on her car. She's determined to do her part for gay visibility in unincorporated McHenry County, Ill., despite the fact that there aren't any gay people in McHenry County to visualize. My mother almost paid a high price driving a gay-identified car: Last summer she and my stepfather were nearly driven off the road by a couple of men screaming, "Faggots!"

I'm opening with my mom because it's nicer than opening with George W. Bush, who took a break yesterday from trashing the economy, despoiling the environment and smirking at the queen to condemn the Massachusetts Supreme Judicial Court for its ruling on gay marriage. Things are apparently going so well in Iraq that Bush can now turn his attentions to more pressing matters, like doing all he can to make sure my mom never has a chance to cry at my wedding.

And my mom really, really, really wants to cry at my wedding, Mr. President. She talks about it all the time, and she didn't appreciate your remarks on the subject. In fact, she thinks you're an asshole. But you're not the only thing standing between my mom and my wedding, Mr. President. There's also the small matter of my reluctance to get married.

I was interviewed on a radio news program yesterday about the ruling in Massachusetts, and the first thing the host wanted to know was if I, along with the rest of the gay community (that enduring fiction), "was celebrating today."

Uh, no, I said, I'm not celebrating. While I'm pleased by the ruling in Massachusetts -- it's nicer to be called a citizen than to be called an abomination -- there are several reasons why it's premature to bust out the champagne. First, despite its strongly worded ruling, the Massachusetts Supreme Judicial Court didn't make it legal for gay and lesbian couples to marry each other. Instead, the justices ordered the Massachusetts Legislature to work something out, giving them six long months to posture, stall and demagogue. Gov. Mitt Romney has already promised to lead a drive to amend the Massachusetts Constitution. Also, the ruling has kicked into high gear the efforts of Christian conservatives to write anti-gay bigotry into the U.S. Constitution.

So any celebrations would be premature, I said on the radio. Monday's ruling was a battle won in the struggle for gay equality, not the end of the war.

The next person to grill me about the ruling in Massachusetts was clearly in a celebratory mood -- "Isn't this wonderful! What terrific news!" -- and wanted to know how soon I would be going to Boston to get married.

While the Massachusetts' Supreme Judicial Court seemed to single out gay men like me and my boyfriend in its ruling -- we have a 5-year-old adopted son -- we're not anxious to get hitched, which annoys my mother to no end. I've been with my boyfriend for nearly nine years, and our relationship is about as traditional as same-sex relationships get. I work and my boyfriend is a stay-at-home dad. Thanks to Terry, our son never had to go into day care -- a fact that would please social conservatives greatly if DJ hadn't spent all that time he wasn't in day care hanging around the house with an avowed homosexual. It gets worse: My boyfriend cooks and cleans (He likes it! I'm not oppressing him!); I mow lawns and remove dead, stinking rat carcasses from our crawl space (I hate it! He's oppressing me!). I haven't done my own laundry in the last eight and a half years; he hasn't paid his own Visa bill in the last five and a half years.

My mom looks at our relationship and sees two people who should be married -- if not for our own sakes, then for the sake of her grandchild. Every time a country or a wayward U.S. state legalizes gay marriage or comes close, à la Vermont, my mom pops the question. She would be right there with us in Hawaii, she said. Then it was Holland. Then it was Vermont. Then it was Belgium. Then it was Ontario. Then British Columbia. Then Singapore. And now, Massachusetts.

But we don't want to get married, I tell my mom, over and over again.