Love amid the Terror

Alexandre Dumas' "The Knight of Maison-Rouge," just published in English for the first time in 100 years, is a thrilling historical romance by the all-time master. 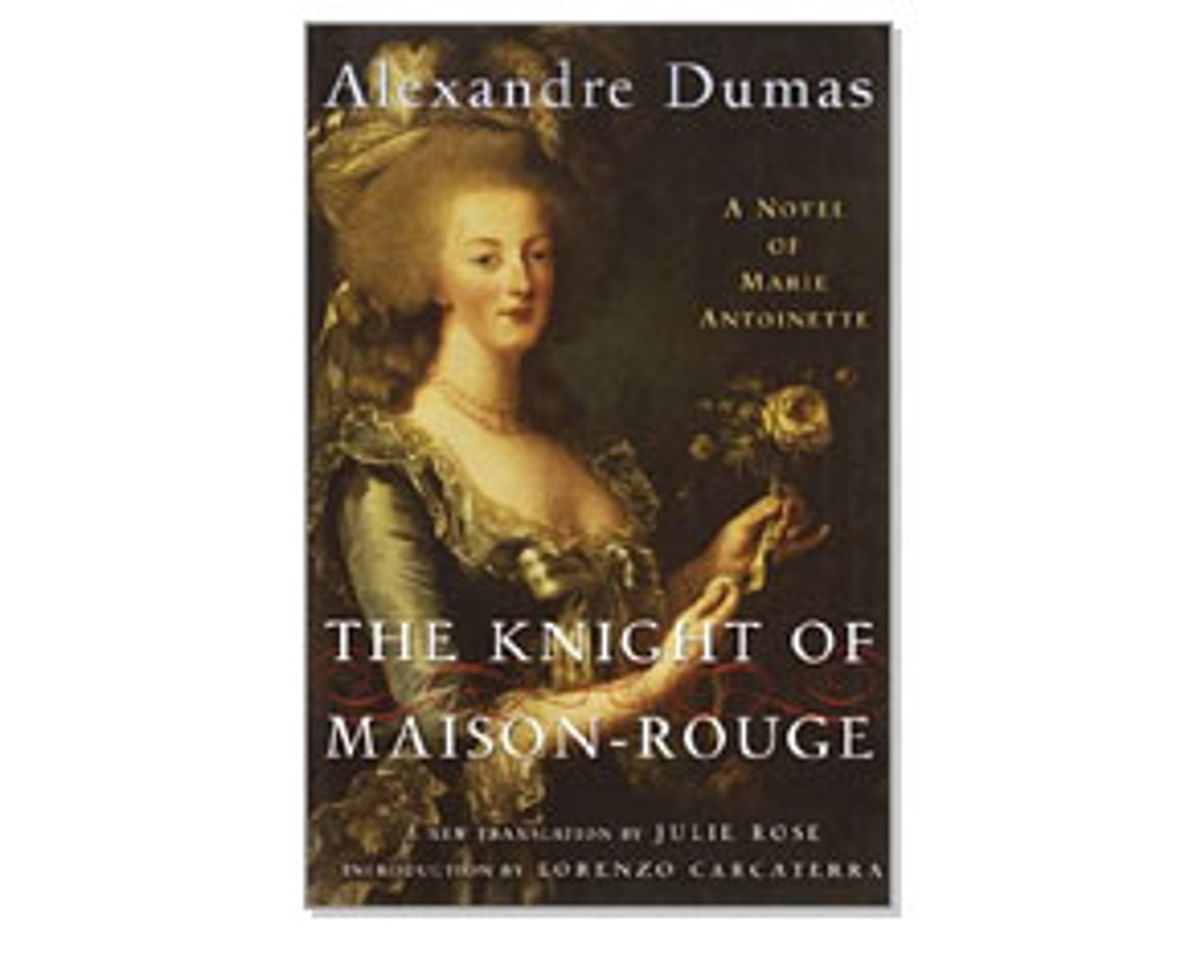 It may be that the good folks at the Modern Library will one day call and tell me that someone in their offices has won the Mega Millions lottery and is donating their winnings to me, or that they are providing me with a wardrobe for life designed by Paul Smith. In the meantime, I couldn't be more grateful to the Modern Library for their decision to publish Alexandre Dumas' "The Knight of Maison-Rouge." This translation by Julie Rose marks the first time the book has appeared in English in almost 100 years. So for contemporary readers, this is almost like being given a new Dumas novel. If you are not jumping up and down at this point ... well, you're probably not someone I'd care to have a drink with. For those of you still scanning the previous lines scarcely believing what you've read, I'll repeat myself: A new Alexandre Dumas novel! That, dear reader, is a precious gift.

"The Knight of Maison-Rouge" originally appeared in installments in 1845 and 1846, the same years that saw the publication of "Twenty Years After" (the second book in the Musketeers trilogy), "Queen Margot" and "The Count of Monte Cristo." This is to say, it appeared when Dumas was doing his best work. "The Knight of Maison-Rouge" is not some piece of ephemera plucked from the archives of a prolific author, now appearing as a curiosity piece for completists. It's vintage Dumas, which is to say it's as thrilling and readable a historical romance as you're likely to find.

The novel is set in Paris in 1793 just as the Terror is getting under way. Louis XVI has already gone to the guillotine. The rest of the royal family, Marie Antoinette, Louis' sister Elisabeth, his daughter Marie Thérèse and the young dauphin, Louis Charles, are imprisoned and subject to all sorts of cruel indignities. The hero is Maurice Lindey, a soldier who has fought bravely on the Republican side and yet resisted its most bloodthirsty excesses.

"'Close your eyes,' whispered the stranger, and Maurice did as he was told. The woman took both his hands in hers and spun him round. Suddenly he felt something like perfumed heat waft toward his face and a mouth brushed his mouth, leaving the ring he had spurned between his lips."

Just as no brave young soldier could resist that provocation, neither could any reader still breathing. Disobeying his word, Maurice goes in search of the young woman, who he discovers is named Geneviève, and becomes a frequent guest at the home she shares with her husband. Maurice and Geneviève are, of course, in love. What we know -- but he only gradually comes to find out -- is that she, her husband and his workers are a group of royalists plotting to free Marie Antoinette and the remaining members of the royal family from their captivity. The knight of the title is a mysterious royalist who has risked death to sneak back into France to carry out his sworn duty to rescue the imprisoned queen. He may or may not be modeled on Count Axel Fersen, who shared a close relationship -- some say a love affair -- with Marie Antoinette.

Other historical figures take part in the novel, most memorably Simon, the lout who is charged with the "re-education" of the young dauphin, which amounts to a license to brutalize the poor boy. (Simon's actual treatment of Louis Charles was even worse than Dumas suggests. The child's story, and the story of the pretenders who claimed to be the lost dauphin in the years following the revolution, can be read in Deborah Cadbury's "The Lost King of France," a wonderful book published earlier this year that is a perfect companion piece to the Dumas novel.) Dumas also alludes to the claims of incest the child was brainwashed into repeating at Marie Antoinette's trial.

Needless to say, "The Knight of Maison-Rouge" is the story of how Maurice makes the tormented choice of allowing his love for Geneviève to outweigh his dedication to the revolution. There are a few glaring anachronisms in Julie Rose's translation, phrases that strike the reader's ear as contemporary. But Dumas' sweeping, dramatic spirit comes through. This is a story where people live or die for love and where we can take qualities like chivalry, duty and honor seriously precisely because they are rendered in larger-than-life terms, as is appropriate to a historical romance.

Though Dumas is often described as writing adventures, romance is a better term. Many of his stories do not end happily. "The Knight of Maison-Rouge" is no exception, but then, the fate of the French royal family does not lend itself to happy endings. But what Dumas provides is the sort of sad ending that is so transcendent it can be more enjoyable than a happy ending. You put down "The Knight of Maison-Rouge" convinced that you've just spent time in the company of the greatest entertainer ever to put pen to paper.