What happened to Halle Berry's memory? Why is her wardrobe so bad? Is this a ghost movie or a women's-prison movie? Open the flower of your boredom and find out. 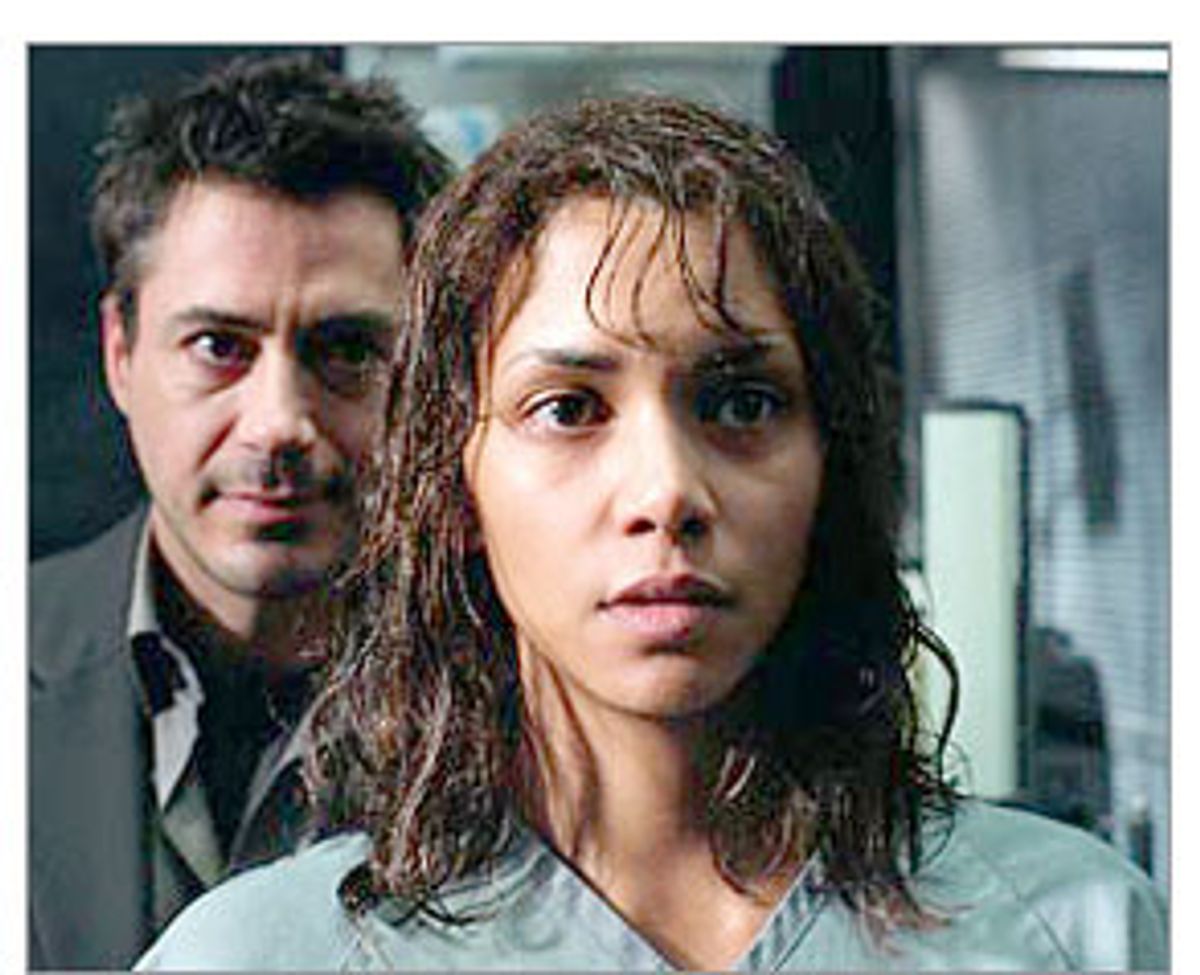 There are many puzzling things about French director Mathieu Kassovitz's "Gothika," not least of which is its title: Other than the fact that one of the characters is an angry ghostie, there's not much that's gothic about the picture. (Why not "Gothique"?) Otherwise, "Gothika" is more of a women's-prison movie than a supernatural thriller, and not a very good one at that. It does feature one shower scene (to which I award a grade of D, for highly unsatisfactory nudity, at least when it comes to the bods you might actually want to see) and lots of drab, pewter-gray cinematography (which earns cinematographer Matthew Libatique a C-minus, and only because prisons aren't the most colorful places to begin with).

But why would anyone attempt to make a women's-prison movie without a single good catfight? And being attacked by a ghost doesn't count. "Gothika" may have some grisly bits, but it's almost completely bloodless. Kassovitz's best-known picture may be the 1995 "La Haine," and he has also appeared as an actor in pictures like Costa Gavras' ultraserious "Amen" and the squiggly art-house hit "Amélie." But "Gothika" is something of an orphan picture; it feels slummy and careless, as if Kassovitz and screenwriter Sebastian Gutierrez knew they weren't making anything that could remotely be considered art and thus figured that minor details, like the plot, weren't all that important. "Gothika" doesn't even have that much style: What we get, mostly, are a few of those obligatory jumpy scare shots and way too much of Halle Berry looking understandably depressed in saggy prison garb and a woebegone, abandoned-nest coif.

Berry plays Miranda Grey, who, until she suffers an accident that causes her to lose her memory and commit a crime she doesn't remember, is a nice, tidy, upstanding shrink at a psychiatric prison. She's married to the prison's big daddy, a bear hug of a man named Doug (Charles S. Dutton, who has almost nothing to do here), although there are tingling flirtation rays darting back and forth between her and fellow shrink Pete Graham (Robert Downey Jr.). Graham becomes Miranda's doctor after her big blank-out. Does he want to help her? Or is he part of the reason she's there in the first place?

You'll have to see "Gothika" to find out, and good luck to you, matey, figuring out who, exactly, has gone to so much trouble to wreck Miranda's life and what motive he or she might have for flinging the poor woman brutally against the walls of her austere cell, among other indignities. "Gothika" seems to operate on the principle that if a movie is even remotely about the supernatural, it doesn't have to make sense. Because ghosts aren't ruled by logic, filmmakers often use them as a free pass to get away with whatever folderol they please. If I were a ghost, I'd be terrifically insulted by that, but it's quite bad enough just being a moviegoer. "Gothika" is horror moviemaking as dollar-a-word blank verse: It doesn't have to work out even remotely logically, as long as it packs 'em in.

A certain amount of faulty logic would be forgivable, of course, if "Gothika" weren't so thuddingly boring. It could at least use more kitsch, as when a prison nurse-slash-matron herds Miranda into the communal shower room, barking, "C'mon, honey -- time to wash away your sins."

But none of the other actors seem to know what kind of movie they're in, even though you can see them making their best guess. Robert Downey Jr. hits a few zinger lines (miraculously, he makes them funnier than they actually are), but mostly he just looks as if he couldn't give a damn, and you can't blame him. Berry works harder, but to no avail. While I give credit to actors who simply keep working, no matter what, I do wonder why it should be so tough for Hollywood to come up with a role that would put Berry's offhanded charm and sexy wit (not to mention her fine-grained beauty) to good use.

I remember the way some moviegoers snorted when they heard Berry was going to be a Bond girl in "Die Another Day," as if such a role should be beneath an Academy Award winner. But Berry's Jinx was a Bond girl with chutzpah; her Miranda is a wild-eyed victim, and while Berry does her damnedest to make something out of the role, her performance is, paradoxically, as overreaching as it is flat and drab.

That surely can't be Berry's fault -- the movie is so shapeless that its actors are bound to get lost. In fact, the only one who seems right at home is Penelope Cruz. I have liked Cruz exactly twice, in Pedro Almodóvar's Sirk-with-a-heart weeper "All About My Mother" and in the ill-fated but invigorating "Masked and Anonymous." I didn't exactly like her in "Gothika," but I will say that she injects her character, a deranged inmate named Chloe, with so much koo-koo juice that you almost -- note I said almost -- wish she had more screen time. "He opened me like a flower of pain. And it felt goooooood," she coos, explaining to Miranda how the devil visited her in her cell. Whatever she did, the devil made her do it! That's valid motivation for a nutso prison inmate, but a lame excuse for a filmmaker. The only thing "Gothika" is likely to open is the flower of your boredom.