When the editor in chief of Simon & Schuster decides to write a book about the horsey lifestyles of the super-rich, nobody's powerful enough to stop him. 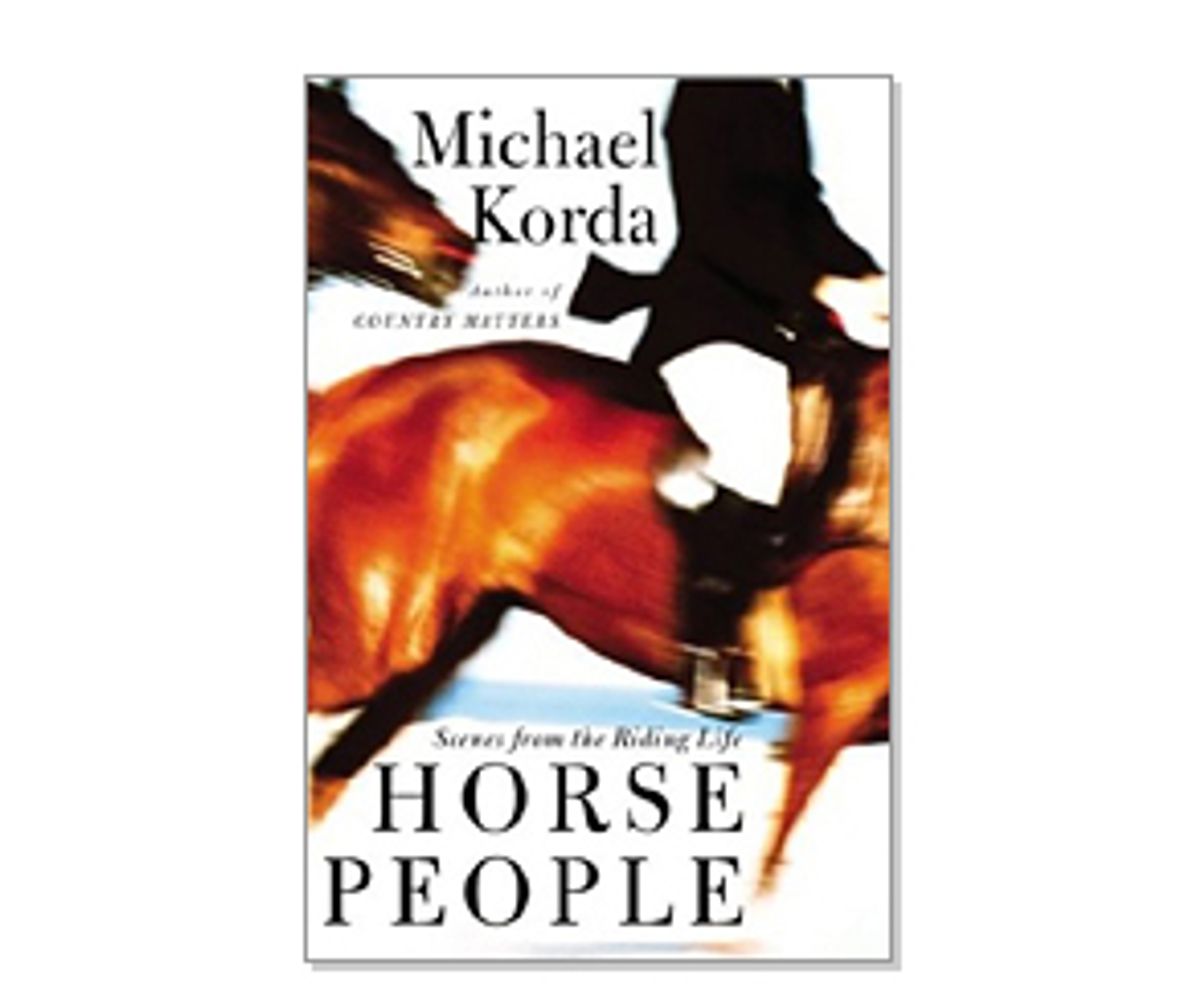 Denny Emerson, an Olympic equestrian, once said that the scariest thing about his sport was the novice warm-up ring. When you come to the newly popular discipline known as "eventing," he's right on the money. Rolled up in all the latest horse-world crash gear, the rider is expected to channel a snorting beast that itself is buckled up in Neoprene, Velcro, prime German strap-work and an assortment of hardware that would stop a train. You go busting out of the start box at three-minute intervals over a course of jumps built to withstand ground combat. Being that close to pushing up daisies every stride of the way feels like the purest essence of serotonin. It makes you real and alive, even when nothing is over 3 feet high.

The exhilaration of riding has certainly shaken up Michael Korda, editor in chief at Simon & Schuster, who happens to be married to an "eventer." Korda has horses on about 100 acres of prime real estate in New York's Hudson Valley, and it follows, given his writerly output, that he'd have something to say about it. His recent "Country Matters," about work, if you can call it work, on his farm, if you can call it a farm, takes you into that upholstered realm of the well-to-do and assures you that they are in fact aware of the outside world, even if they can't exactly find it.

Horse books have been popular recently because of their fresh way of satisfying the human appetite for heroism in innocent forms. Laura Hillenbrand's "Seabiscuit" was a gem of this class, and Jane Smiley, whatever you think of her portrayals of the rich and feckless, knows her ponies. (Forget Kevin Conley's "Stud," a New Yorker piece turned into a book that never got past its amazement at the size of Storm Cat's dick.)

Face it, unless we're talking about thoroughbred underdogs -- a club of one this year, thanks to Funny Cide -- the horse world is a non-inclusive place. Riding is fun and competition is more fun, but dressage, cross-country and stadium jumping are narcissistic endeavors that don't exactly make the world a better place. "Eventing," generally speaking, is a sport for the most restless kind of haves (who are often the most obnoxious.) Fox hunting, on the other hand, at least as practiced in this country, is a rich man's way of preserving open space, and it's far less violent than people suppose. When lunch rolls around, everybody goes home, including (almost always) the fox.

Korda's focus is less about horse people per se than on his wife Margaret, whom he compares to the 19th century heroines of the bible of fox hunting, R.S. Surtees' "Handley Cross." It's true that Margaret wins a lot, which is annoying. Her horses are unpretentious and yet somehow sparkling. (That paint gelding is the most extravagant color I've ever seen on a mammal.) Asking readers to admire someone with a full-time coaching staff on premises, the best farrier in the business, a box van in her stable colors and nothing else to do besides practice is more than a stretch -- it's downright silly, an undercurrent that tints this entire enterprise. Margaret may very well be as good a rider as Michael says she is, but we'll never know unless she gets out of the novice division, where she's been roosting for the past 10 years.

As to whether the rest of the world cares how hard it is to get good help around the barn, or what can go wrong with automatic waterers -- well, that's why vanity publication is such a problematic beast. Nobody in a position to complain is going to have the guts to tell this distinguished figure in the literary world that he needs an editor. "Horse People" is published by Rupert Murdoch's outfit, signaling an alliance between the two, while raising questions about the way both businesses, Murdoch's and Korda's, are run.

Well, power -- or rather, Power! -- is Korda's game, as evidenced by the mechanism that got this whole thing in motion. Not everybody can get this kind of back-cover copy, written in transports of ecstasy. (Word to Tony Hillerman: Shakespeare is the Shakespeare of the riding life, and after him, we have to go through Kipling and probably Louis L'Amour before we can get this excited.) One thing we can give Korda is that this book is factual. He's really lived it, this life of watching other people shovel shit, and there is a measure of myth-smashing in "Horse People" that's welcome.

Korda's also just mad enough to have attempted to illustrate this book himself -- an act rather like cutting your own hair. And he's honest, freely admitting he doesn't groom or tack up the horses he rides, which to the real cognoscenti is tantamount to sex without any foreplay at all. Though obviously a man of action, he's also not too hip to admit he sometimes gets scared -- a laudable trait. And in the final scene, where we find him rocketing up a hill on a grand old thoroughbred, it's hard not to share the gleam in his eye.

Horse people, as a rule, tend to feel so neglected they go nuts over anything that praises their obsession. That's the only way the barn rats (human variety) could ever have been persuaded to drop their pitchforks and run en masse to theaters to watch the idiotic "The Horse Whisperer" and the simply lame movie version of Laura Hillenbrand's stunning book. They'll probably love this, too, because it's got everything they know in it.

Michael and Margaret Korda actually do provide horse people with a sovereign gift every year, in the form of a springtime schooling show that opens up their property to anybody who can get their entry in before the deadline. It's the party of the season, all the horse people say -- just the perfect balance of dirt-surfing and noblesse oblige to make any jaded modern's heart beat faster. It's better in person than it is on the page, is all I can tell you. Maybe next year, they'll make us a pile of books and we can jump it.