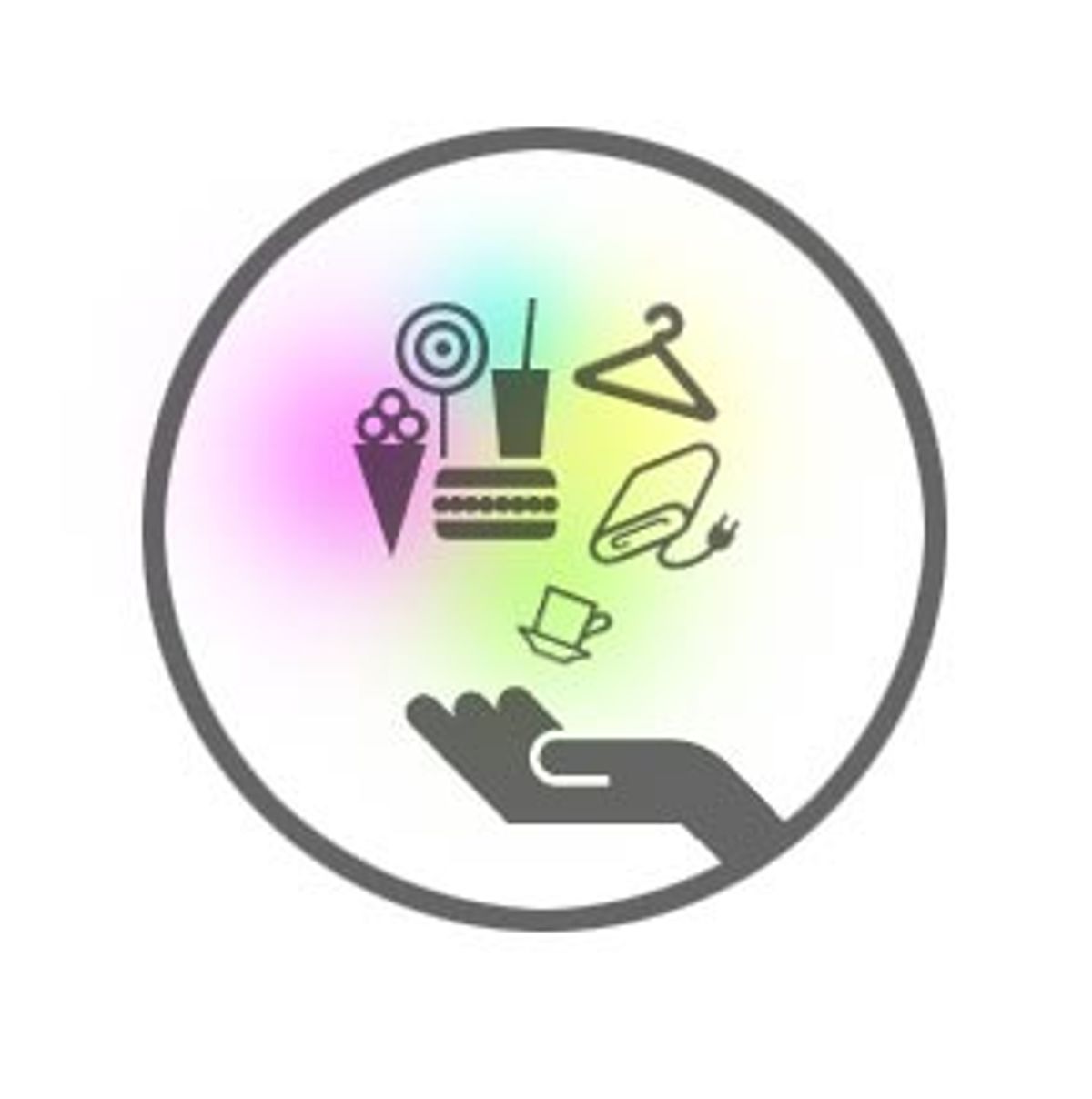 But over the past two months the self-described "starving artist" has developed a taste for giving his possessions away to strangers. "I don't have any money. I'm unemployed, but if I am able to give things to other people that make them happy and that they need, what a wonderful gift that is -- to me," he says.

On the Freecycle Portland mailing list, Wallis has offered up a bizarre accumulation of freebies that include large mirrors, art prints, tires, firewood, bike helmets, bicycle racks, trees, a sump pump, 12 Cuban cigars and even a whole computer.

"I was going to give away a computer case, but I ended up putting a hard drive in and an operating system to make it a completely working system," he says. "Because I could, because I didn't really need it, and I could make it a nicer gift to give to somebody."

Via Freecycle, Wallis has also received his share of gifts from people he'd never met before: a little tabletop fountain, a 35-millimeter camera, a toaster-oven and a mini-fridge.

"I grew up poor, and growing up poor you collect stuff, because you're never sure when you're going to need it and you can't buy it," says Wallis, who admits he has "packrat tendencies."

If a true packrat hordes, a "freecycler" can't stand to see something that might be useful to someone else go to waste, languishing unused in a musty garage, attic, bottom dresser-drawer or -- worse yet -- a landfill. That type of person has always existed, but today, thanks to the efficient distribution capabilities of the Internet, Wallis has joined forces with an entire tribe of thrifty givers. At Freecycle everything is free, and you can get rid of practically anything, from a pile of dirt to a beading loom.

In the face-to-face world, it's often hard to find that deserving person who needs your specific load of useless castoffs. Enter the Internet, which not only makes such networking easy but also has long been suffused with an ethic that promotes gift giving. Since May 2003, the Freecycle concept has exploded, spreading from city to city with the speed of a grass (roots) fire.

"A gift economy is different from anything that most people have ever experienced," says Albert Kaufman, 42, an unemployed activist and musician who is the moderator of the Portland freecycle list. With more than 2,000 members, it is one of the largest created so far. "It's pretty wonderful," Kaufman says. "It's sort of like Christmas all the time." Best of all: You don't have to buy anything new.

While eBay recasts clutter as a collection of valuable commodities to be marketed to the highest bidder, Freecycle magically transforms junk into presents, allowing almost anyone a chance to play Santa Claus channeling St. Francis. Which raises the question, what's really more valuable: Selling that 1980 Strawberry Shortcake lunchbox you've been carting around for decades for the best price possible? Or knowing that your much-neglected ice-cream maker, bread machine and transcription device have been given away to good homes where they may actually be turned on occasionally?

Besides the lofty altruism, freecycling is also about trying to get rid of junk: an old washing machine that may work but hasn't been hooked up in years, a jumbo dog-carrying cage for a dearly departed pooch, those coffee mugs that seem to breed and multiply in the kitchen cabinet. Lurking on the lists are the detritus of many abandoned projects and long-forsaken hobbies: On the Tucson list on Nov. 17 a woman's 10-pound bowling ball was up for grabs with this caveat: "It's grey marble color and unfortunately I had my name etched into it but I hope someone can use it and is a better bowler than I was!" The ball, along with a blue bowling-ball carrying case and a pair of "almost new" size 6 and a half bowling shoes, was spoken for in just 13 minutes.

Picture a vast junk box floating in the ether, spilling over with an inflatable raft, a clothesline, a 12-inch radial-arm saw, an Elmo sandbox, 18 post-mastectomy bras, three squashes, two rats, a rat cage and all sorts of other battered treasures, all flanked by a giant sign: FREE STUFF.

"We all have something that we don't want to admit that we're not using and will never use," says Deron Beal, 36, who started the very first Freecycle list in May 2003 in Tucson, Ariz., where he works part time for a nonprofit recycling group called Rise. Beal created the list as a way to hook other nonprofits up with the used couches, computers, office chairs, desks and file folders that the businesses he worked with no longer needed. Since then, the Tucson list has grown beyond the nonprofit world to include more than 1,600 members, and the concept has been adopted in more than 82 cities, including Kansas City, Orlando, Washington, Bangalore and Tokyo, with new lists now starting at the rate of 10 per week.

The ground rules are simple: Posts to the list indicate whether an item is an "offer" or "wanted" in the subject line, and there's no cash, barter or trade allowed. While offloading free stuff on the Net certainly isn't new to local community sites, Freecycle has spawned a mini-movement devoted to giving. Some people may get on the lists solely in search of freebies, but they soon start feeling the itch to part with their own extra filing cabinets, hearing aids and plasterboard.

Sometimes the goal of wasting-not is taken to extremes. Bryan Cordova, 24, a recycling education coordinator for a nonprofit environmental organization who has given away cacti, towels and a twin bed on the Tucson list, recently found himself mailing a dog food coupon to a fellow freecycler. "It was a coupon for a free bag of dog food," he says. "It wasn't a brand that I was planning on purchasing for my dog. It was just a few dollars' value, but why let it go to waste?"

Unlike donating to a charity such as Goodwill, freecycling puts the giver in touch with the people who will be benefiting from his or her largesse: "You deal with them directly so you know that the person who is getting what you're giving away is somebody who needs it," says Anna Harrison Griessel, a 39-year-old video and film producer who lives in Green Valley, Ariz. Griessel has given away five bags of clothes, a Microsoft keyboard, piano books and cookbooks on the Tucson list.

There's the added incentive that it takes less effort to shoot an e-mail out offering a single item than mustering up the energy to clean out a whole closet to justify a trip to the Salvation Army. And freecyclers argue that they do reach the needy who can't afford to log on for freebies via the many nonprofits that frequent the lists.

Once you start giving things away on the list and meeting the people who want them, the game of giving can become an end in itself. "It's just sort of fun now to walk through my house one room at a time and see what I can get rid of," says Griessel.

"Paying it forward" and "karma" pervade the way freecyclers think about their lists. "People are always talking about doing the right thing and helping your fellow man and saving the environment," says Martha Blake, 36, a stay-at-home mother in White Salmon, Wash., who is the moderator for the Columbia Gorge Freecycle list, which has 203 members. "We all have really good intentions and have all these dreams of things we want to do to help, but we always seem to be stuck in our everyday things and never get to those. This is kind of handed to them on a silver platter: This is your chance." She received an old bookshelf from the list, which she converted into a ferret playground, and gave away a fish and a fish tank to a local 7-year-old boy whose mother didn't want him to have a more labor-intensive animal as his first pet.

The spread of freecycling, however eco-friendly a way it may be to relieve chronic overconsumption, does raise the not-so-ideal prospect of perpetual junk shuffling -- as soon as you get rid of your clutter, you take on someone else's. But maybe that will turn out to be the Internet's greatest gift -- in the future, there will be no junk, because every last thing will have found its way to a person who truly needs and appreciates it.