Lunch with my husband's hooker

I bonded with the woman he cheated on me with. Then I started weeping. 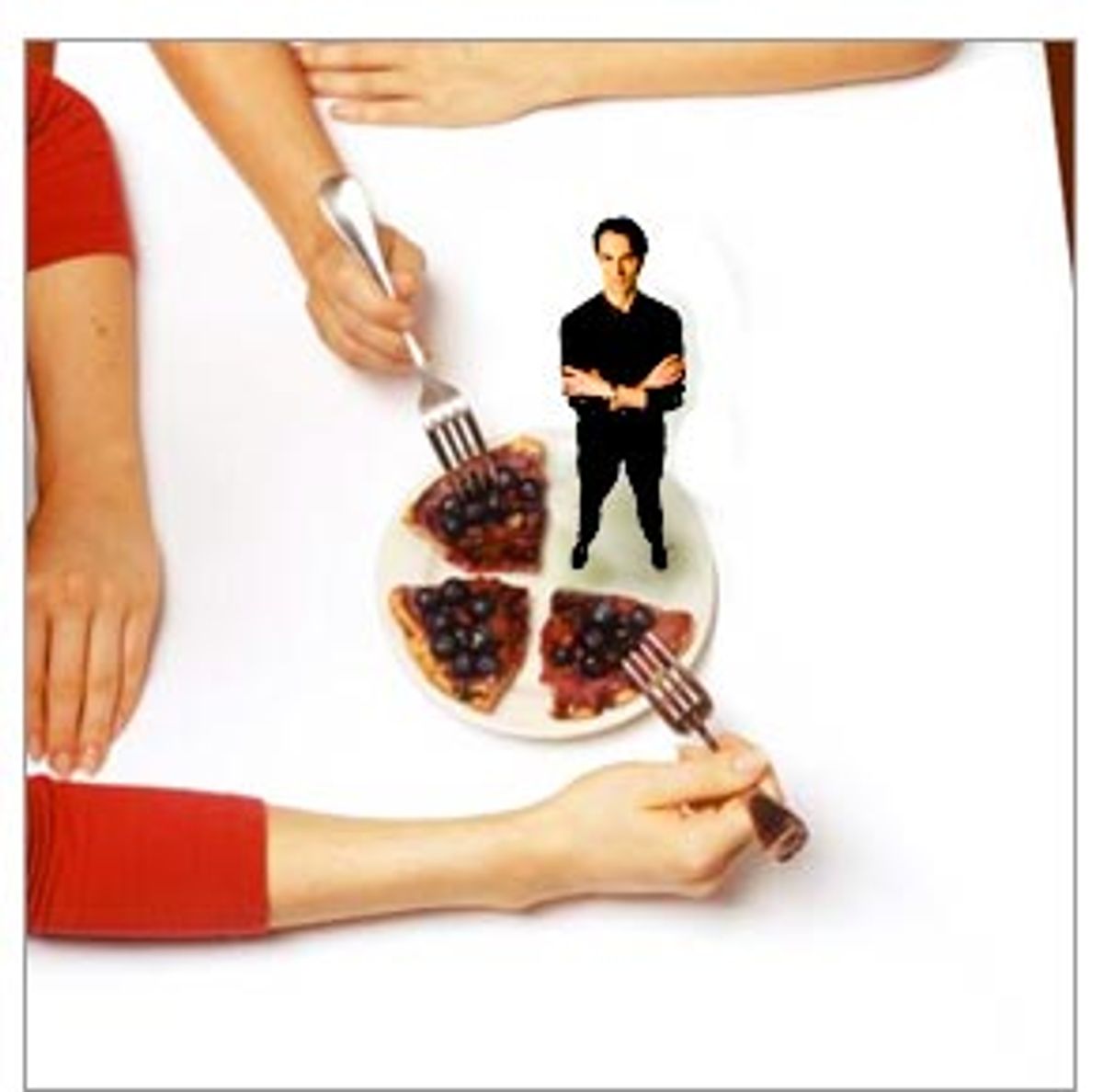 A few weeks ago, I invited a hooker out for lunch. We ordered a bottle of wine, shared a veggie burger and chatted about our families, media bias, and men. By the end of the afternoon, we were making drunken jokes about penis envy and premature ejaculation, and then, suddenly, I started weeping. She reached out and comforted me and I sensed an immense empathy. I was surprised at my feelings. Here was this stranger, not my typical girlfriend, and not someone I would normally be out sharing a burger with. We came from different worlds: She had never finished school, I was an Ivy Leaguer. She was forced to learn survival lessons at 16, I had had a pretty charmed childhood. She was a prostitute, I was a homemaker.

But we shared one thing in common. We'd both had sex with my husband -- repeatedly.

The story had begun three days earlier, when I found out my husband had been cheating on me. Mine is pretty much the textbook infidelity story with all the usual ingredients -- his denial, followed by my discovery, followed by suicidal (and homicidal) feelings, followed by rage, more rage, and then lots and lots of hurt. I am at the hurt phase right now, trying desperately to sublimate my feelings into a story, an anecdote, maybe even a cartoon strip.

My husband and I have been married seven years, happily for the most part, but with some rocky patches along the way. When we had a baby, we grew closer. I thought the worst was over and started enjoying the experience of our new little family. And things were better, except that my husband obviously believed that he could relish his main course along with a little something on the side.

Circumstances conspired against us. We were away from each other for long stretches last year. We lived in London, but his work required him to travel to Houston. He would stay away for one and sometimes almost two months at a stretch, and I would be back home, coping as a single mom, making short trips to America when I could. Finally, it became impossible to deal with the back and forth and the different time zones, so we decided to move to Houston as a family.

I should have caught on to my husband's subterranean life, because of course there were clues along the way. To start with, he kept postponing my arrival date. I should have wondered what was going on, but his reason was so plausible -- Baby, I may need to be back in London next month so we may as well fly back together -- that I scarcely gave it a thought. When I moved to Houston, I noticed that he had picked up interesting furniture from a garage sale, which was not something he would have had access to, unless he knew a local. Finally -- and in retrospect I feel utterly foolish for being so thick -- there were condoms in his drawer. He said he kept them there just in case I hadn't brought any protection. "Otherwise, wouldn't I hide them, Baby?" I wanted to believe him, so I did.

I didn't give it a thought until the bedroom scenes started happening. We have always had pretty great sex, but suddenly he wasn't able to perform. It went on like that for a while, leaving me at first bewildered and confused, then outraged and frustrated and finally horribly insecure.

He was also distracted most of the time, and if I brought it up he'd react angrily and blow it off. Finally, I did what I never wanted to do as a wife and partner -- I started prying. It didn't take much sleuthing. His cellular phone listed a number of someone named Mitch, whom he called often. Who was this? Someone at work, he promptly told me. I had never heard the name, and the episode may have passed had he not called the number over a long weekend, which didn't quite fit the picture. Bad move, Honey. I called the number and a husky female voice drawled, "Hello."

Mitch was in fact Michelle, an auburn-haired escort who specialized in aromatic rainbow massages.

I held my cool that day until my child had gone to bed and then I confronted my husband. He continued to make up one lie after another, and started tumbling. I stared at him in disbelief, then just picked up the phone, called "Mitch" and introduced myself.

"I'm glad we're speaking," she said. "Yes, we've been seeing each other for a while. I was made to believe you guys were separated. I realized only recently that you are definitely married and he's just having an affair. But we've sort of become friends so we stay in touch." She let me know that he had only paid the first time; after that it was a relationship. She continued, softly, "I think the three of us need to sit down and talk."

She sounded kind, even thoughtful. I responded to her instant honesty, something neither of us had gotten from the man we knew in common. I told her I would rather meet with her alone. That's how we ended up sharing the burger.

When I think back on that afternoon, I realize that I may have experienced a bit of Stockholm syndrome when I started sympathizing with the captor. But she was also a victim, in a sense. She had been lied to, or at least that's what she claimed. She was probably responding to someone who had been nicer, and more interesting, than most of the men she meets.

When she reached out to me that afternoon, she said, "Just remember, I am walking away from your lives without ever looking back." She even joked that she would introduce me to a boy toy if I ever wanted, but advised me against it.

As she was leaving she said, "I know he's been a shit to you, but I think deep down your husband's a really good guy. Believe me, I've seen all kinds."

I will come to my own conclusions on that front, in time.

Eight weeks later, I am still picking up the pieces. I have strange and vivid dreams. In the most recent one, I am burning up stacks and stacks of my husband's letters, throwing them into a bonfire, while my husband stands around looking sheepish. I don't need a couch to figure out that I am desperately seeking closure. But it crawls back and knocks on my door again and again. I am fraught.

I have decided to stick with my marriage, even though friends tell me to jump out. Why? I believe infidelity is not a marriage breaker; it's an achingly painful reality that must be dealt with, and treated, like an illness. I can only hope we're in remission. When I look around me, I see dysfunctional relationships of one kind or another. I don't believe that if I were to walk out I would necessarily be happier, either on my own or with the next person I meet, who may have his own demons.

I am staying on because my husband and I are good friends and have had some great times together. He has been seeing a counselor regularly to figure out what he was up to. But above all, we have an adorable child who doesn't deserve to be part of a broken family, especially if his parents are committed to renewing their ties.

Even Michelle, who, in her own way, seemed very clued in to relationships and marriage, suggested during our strange lunch that I should go back and have great sex with my husband.

I did. Sometimes, when you are hurting really badly, all you want to do is shut your eyes and feel good -- even if it doesn't make any sense at all. There was a painful intensity to our lovemaking that night, a tsunami of emotions, and yes, for those few moments, I did feel good. The tough part comes later.

Roberta Johnson is a writer in Georgia.